Women's Conference planned for, looked forward to was finally here.
The house was stocked with premade dinners, the schedule was on the fridge, kids at school all was arranged.
6 years ago my good friends got me to go for the first time, now after 6 years most of us were finally able to all be able to go again at the same time. Just by chance Kim was on our flight, and by even a slighter chance on the same row with us! 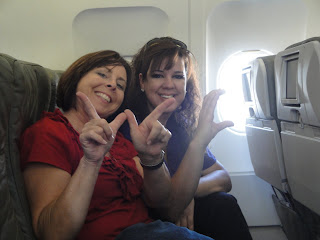 Donna was also on the same row with us even though she didn't plan it either! What a fun way to start the weekend ;) 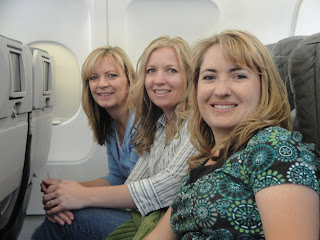 At the airport in Salt Lake we met up with Shawna who flew in from Colorado. While we were waiting I notice a lady walking by herself...she looked familiar...is she...???
I was brave enough to stop her and ask. She is Christy the blog author of Everything Pink. I've never met her, she doesn't know who I am but shes one of the few blogs I follow of people I don't know and sure enough here she was.
She was very sweet and was nice to chat for a few minutes before we headed our separate ways. 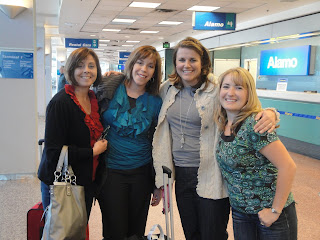 That night we had dinner on top of the Joseph Smith building. Yum. 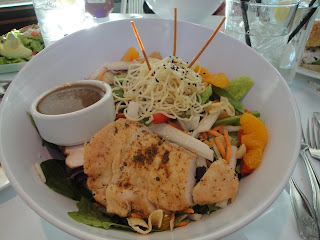 The food was as fabulous as the view. 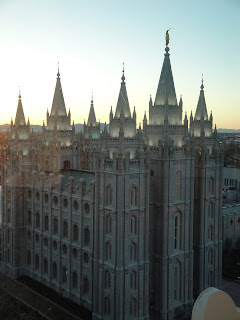 The sun was just setting and the lights were coming on. 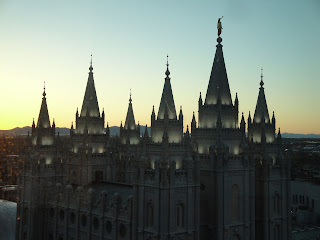 Ha ha...the dorms were not 4 star hotels...but they did the job.
(It felt like what a prison bed might feel like...maybe...I'm not too sure what a prison bed feels like)
We ended up not doing too much sleeping anyway because we kept talking too much late into the night. I haven't missed that much sleep since I was a teenager! Or a new mom...both were pretty sleep deprived. 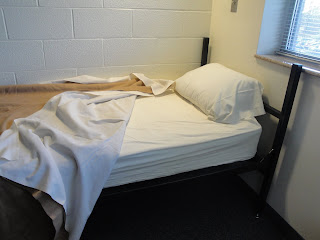 The first day of the conference was great. It was so nice to be back at BYU, I always love visiting. It makes me remember the times that I attended and now it reminds me of the other times I've been able to come to women's conference. Maybe some day one of my children will attend ;)
That night we met up with the Thompson clan to eat at Brick Oven Pizza. 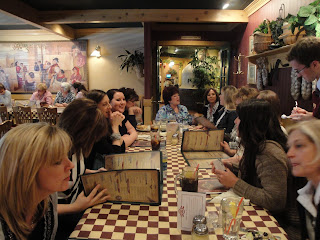 The food was great and it was fun to hook up with Summer's group. 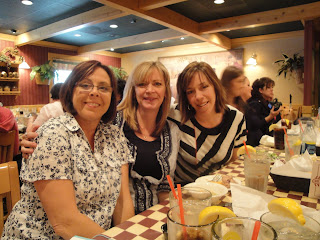 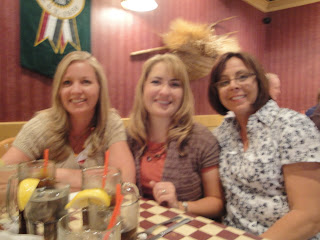 After dinner we went back to the Marriot center for the evening concert. 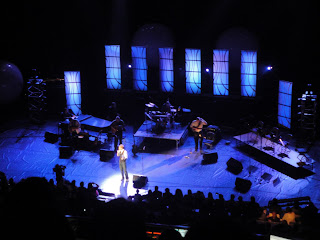 We saw some amazingly talented people. One of the Osmond grandsons (Alin's son), we saw an amazing pianist, violinist, accapella group, some others and of course Hillary Weeks. 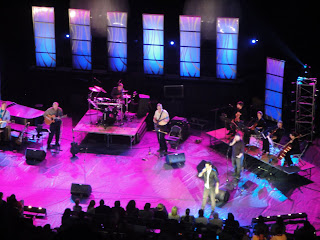 The second day was much colder than the first, in fact it started to snow!!
I think I liked the classes the second day even better than the first. I even got to hear one talk as I made bracelets for grieving mothers of stillborn children. They were a matching set one for the child and one for the mother, a very tender act of service.
The end was capped off with a talk from Elder Bednar and his wife.
It was a great time to fill my spiritual lamp and to get to know new friends and good friends even better. 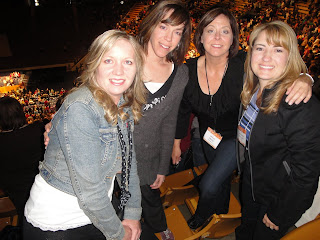 Just a few hours later this was all covered in snow!! 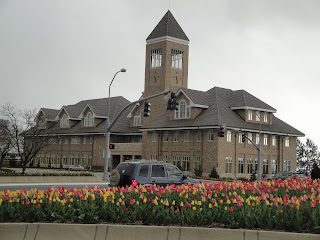 After the conference was over we went to the Cougareat for dinner and of course dessert. 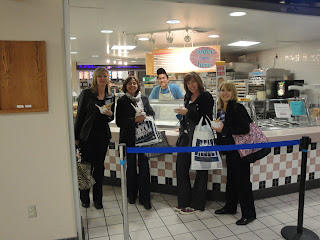 I couldn't believe my two choice child scoop was only $1.50. Yum! 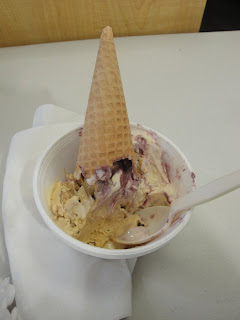 After shopping at the bookstore we headed over to the art museum to check out the Carl Block exhibit.
While we were waiting in line we checked out this side exhibit...this is the most giant stack of books I've ever seen! 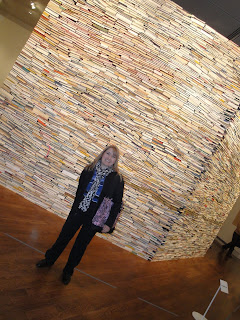 I think walking through this Exhibit was a highlight of the whole trip.  He painted many of the pictures of Christ's life that we use in our manuals and gospel art but many people don't know who he is.
It was remarkable that they had been allowed to borrow 5 of  his 8 large altar peices from Denmark. They were taken from the churches where they were houses, all but one had never been moved before.
His paintings highlighted things about Christ and the physical realities of his life, death and ressurection that we had never considered before. It was a wonderful way to cap off our 2 days together. 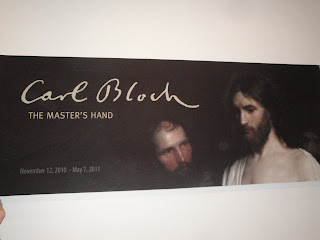 On the way home it's dark, and cold, and we got turned around now we had an even longer walk.
We asked these guys for directions to get back to our dorm. They were a nice family vacationing from Canada but the husband knew BYU.
Instead of telling us they offered us to hop in....so in we went squished into the mini-van forcing their daughters to crawl in the back. How nice for good samaritans. 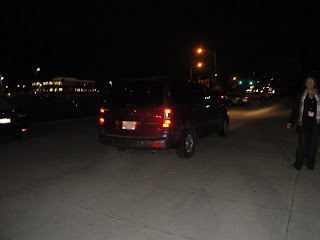 The next morning this is what we woke up to! 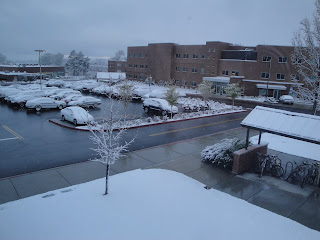 (Cindy wasn't so lucky and had to wear capris and sandals the whole time ;)


We're sad it's over but so glad to be able to come home to our families. 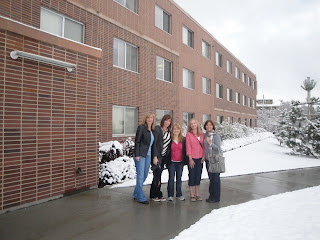 I think what I love most about women's conference is that it reaffirms my role as a woman, a wife and mother. In a world that applaudes outside success we are applauded for spirituality, faith and being more Christlike. It gives me a greater resolve to raise my children better, to not let myself get too tired to let go of the things that matter and to work on things one drop at a time. 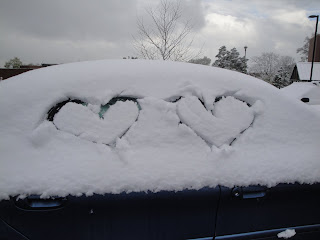 Some of my favorite quotes from the week...
"Keep it small, Keep it simple, give it time" Virginia Pierce
"If you don't receive an answer to a prayer proceed forward being glad the Lord trusts us. He will guide us if we get too far off." Virginia Pierce
"In the end everything is OK.   If everything is not OK, it's not the end." Susan B. Tingey
Sometimes there isn't balance. Sometimes our focus needs to be on one thing, and other times on another. There will be times that things are not done when we need to focus on something else. Elder Bednar (paraphrased)
"Dont' get caught in the amusement park...Welcome the task that takes you beyond yourself." Susan W. Tanner.
"Relief Society taps into our needs, desires, strengths and role as purposeful daughters of God." Julie Beck
"Am I alligned with the Lord's role for me or am I trying to escape my duties?" Julie Beck
"Just take life one day at a time. You will be blessed one day at a time with what you need (like manna from heaven) Charity endureth forever, one day at a time." Sidney Reynolds
"Between conflict and resolution...we have a choice.
Between thinking it and saying it...we have a choice.
Between the prompting and the blessing ...we have a choice.
The spirit will always entice us to rise to a better self will we make the choice to listen?" Susan Gong
"The fervent effectual prayer availeth much...our spirit yearns for communication with God but sometimes we fall asleep on our knees." Jerie Jacobs
"We are like lionesses at the gate of our homes to keep out the worldy influences, we are there, we are present to see what comes in and what goes out." Mary McConkie
"Why are small and simple things so important? Just like the difference between targeted slow drip irrigation and the wide spray of the sprinkler to the growth of deep roots spiritual spurts followed by rest will never be as effective as constant drops of spiritual nourishment. 3 days straight of fasting will not yeild the same spiritual results as 3 months of appropriate fasting and worship. 5 hours of prayer is not the same as consistent daily prayer. Marathon scripture reading will not replace what is gained by daily scripture study. May we have the eyes to see and the capacity to press forward in the pursuit of small and simple things." Elder Bednar
Posted by Christine at 11:04 AM

Great summary of our fantastic girls vaca! It was a beautiful week, but it has been nice to catch up on my missed sleep! Miss ya!!

I don't know why I've never even considered going to Women's Conference...why not? Next year, right. What a great experience and we all need those reminders.