When Life brings you up

This week we bounced back...as we usually do in life and had a much better week ;)
School is winding down, performances, graduations, programs, parties and plays are scheduled this week and soon we'll be into the full swing of summer (and sleeping in, Yeah!) Seminary is over, homework is winding down (except for Taylor's infernal health class) but life is slowly getting less complicated.
Let's start out with some Mom moments...
This last week I was on the phone with my sister and all the sudden Ashley came up and said "Here mom, here's my tooth." I asked her how it happened and she said she was pushing on her two loose teeth to see which one was looser and one popped out. It was bleeding so it wasn't a completely easy tooth to get out either. So I held her tooth and kept talking. Literally 2 minutes later she comes back with the other tooth "Here you go Mom here's the other one." She decided to pop out both. Ha ha. 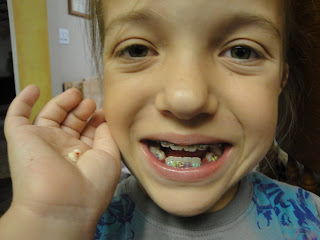 Ashley's school is working on an undersea play. She tried out for one of the lead role but it went to another girls so Ashley ended up in one of the choruses. But since she's the understudy she's been able to fill in for her a couple of days when the other girl hasn't been at school. (She says the other kids say she does it better at it ;)
Anyway I've been coming into the classroom to help with the backdrops. we ended up letting the students paint and cut out sea creatures and then I pasted them on blue butcher paper with streamer sea weed and brown paper rocks. Her play is this week and I'm excited to see it. 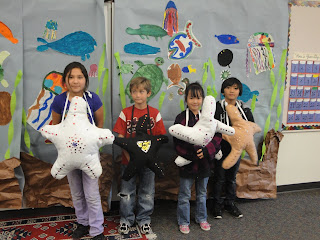 We also filed all the kids outside for a class picture so I can make little autograph books for them...that was quite trick to get them to get in position and hold still long enough to get this and get out of the door in time for a dentist appointment Ashley had (she had a small cavity drilled this week) 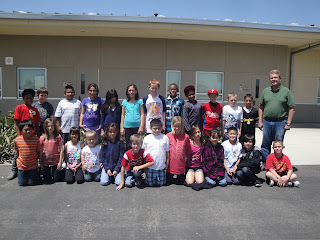 On Thursday the Relief Society went over to the Mitchell "farm" and we got gardening lessons from brother Mitchell. 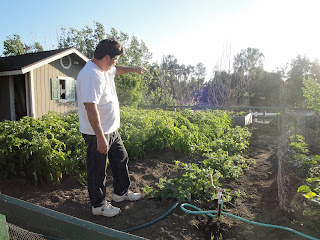 He is very knowledgeable and his garden is beautiful. 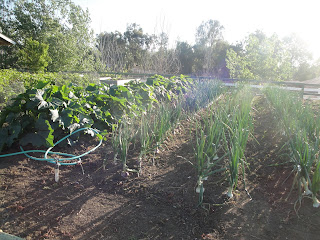 It was nice to learn from someone who really knew what they were doing...it got me inspired to look into starting a garden.
Our soil is so bad and filled with buried junk in the one spot where we have room in our backyard to garden a raised bed garden is the only kind I would be able to try. We even left with potato and onion souvenirs.
Funny thing about the onion, Mark Mitchell loves his white onions and pulls it out of the ground and brushes it off and takes a bite out of it like an apple. He kept telling us it's really sweet doesn't have a bite to it like other onions....so when we went back to the house he cut us all a piece. I had the smallest piece. Yup tastes like an onion. Thats all I had but that little piece of raw onion stayed with me until the next day. Jeff kept saying I had onion breath...brushing my teeth didn't help...mouth wash wouldn't do it....I was in bed chewing gum and it still didn't help and the next morning all I could taste was still onion! I guess thats why I only eat them cooked :) 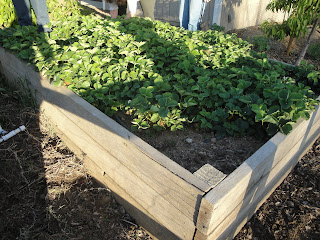 Friday was a great day of lunch and a field trip with Mary Ann out to Tai Pan to look for dishes.  I never got dishes for my wedding so for the last 18 years I've been using these dishes that my sister-in-law gave me after using them for 10 years and didn't want them. There is nothing wrong with them and they've worked great, and I appreciated them but I was ready to just be able to pick out my own dishes. (Jeff didn't see why I needed to change them :) 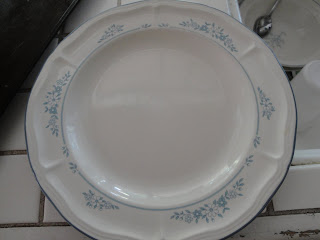 So I got these ones for every day that match with my kitchen colors. 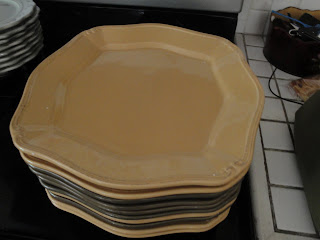 And these for when company comes. The dishes were bought by the piece but this set was on clearance and all complete (some sets only had certain pieces to them). So I filled my cart with as many dishes as I wanted out of the set and I was stopped twice by other ladies interested in the set and wanting to know if I was going to buy "all those" dishes in my cart.
I was happy to check out and get them away from vulture shoppers ;) 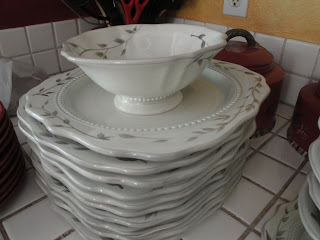 Saturday Jeff and I split up and I went to Jenn Williamson's baby shower put on by Andrea and Jeff took the dog into her last doggie training class to graduate.
The baby shower was great and Andrea did a wonderful job (sad I didn't bring my camera). I liked her cute games, even won one, but my favorite was turning on the timer while Jenn was opening presents and when the timer went off whoever's present she was opening got the next prize. Cute.
Funny for signing up for the dog training class we got a free 8x10 photo at the photo shoot that was happening at Pet co this weekend. I tried bringing her in on Friday but the photographer ran his hands down her and said "she has a tick" What!!!  It was nasty and I didn't know what to do never dealing with a tick before. Blah! We ended up going over to the groomer's in the store and they got it out for us, which actually made her bleed and then they had to try and get her to stop bleeding. Wow! I was just glad they were there helping me.
After all our separate stuff we packed up and headed out to go with the Stubbs out to Lake Perris to try and ride on their catamaran for the first time.
As soon as we got there Ethan got the car stuck in deep sand. At first Jeff was trying to push the car alone...wasn't helping. They finally got it unstuck when they took off the trailor and Jeff, Taylor, Ethan and two guys that were at the beach all pushed it while Amy drove. 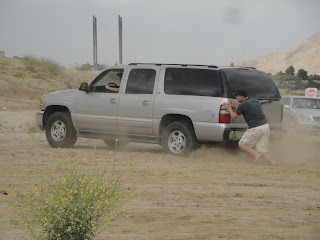 It was a fun day at the lake. It wasn't too hot or too cold and jsut windy enought for sailing.  The girls were exicted about their "fossil" find. (cleaned off fish bones) 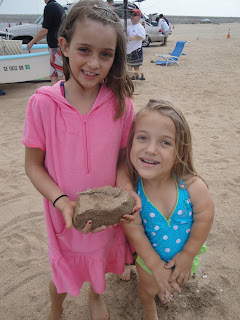 The boys were excited for their fist catamaran ride too. 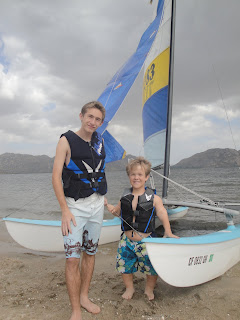 Me and boys got the first ride. I have to admit when I first saw this flat thing which nothing to hold on I was a little nervous (especially with tales of tipping over and such) but it was fine and Ethan was experienced enough to keep us from tipping ;) 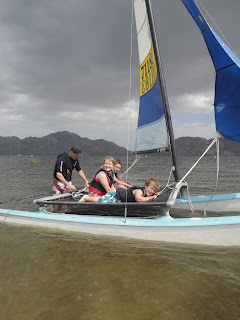 Lowen was the cutest and would smile every time the camera was out, even if he had been crying right before. He was a busy boy and kept running all over the beach, Amy had to threaten that there were snakes if he didn't stay near us (didn't help too much ;) 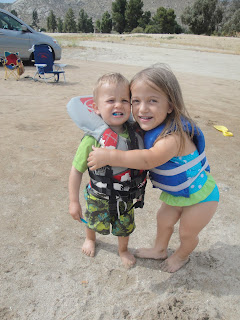 Ashley, Sole and Jeff got a nice long, fast ride and Ashley discovered she Loved it! 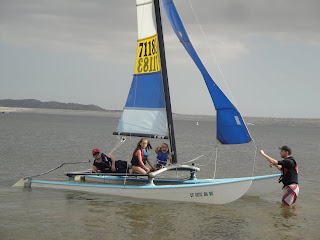 Then all the big boys got the last ride and Ethan took it fast and fun for them. My boys discoved how fun it was to stand on the pontoons and "surf". The first time Taylor was on the pontoon and wasn't holding on to anything Ethan tried to turn it quick to throw him off...he almost ended up throwing himself off...but in the end they all stayed on. 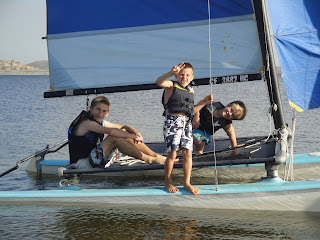 My family had a blast and are all looking forward to being able to go again sometime. Thanks Stubbs! 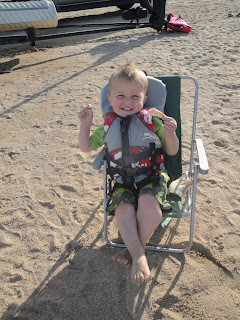 Yesterday we decided to have Steve and Tahna's family over for a memorial Day barbeque after church. It was our ward conference (I got to give my lesson in front of not only my ward but all the stake leaders as well, which was a little intimidating at first) and then Steve had a jam packed rest of the day. So we had his family coming at 4 and then he came just to make a plate after his meetings and then they were off to seminary graduation.
On the way home from church Ashley asked if she could wear jammies. We told her no because family was coming over.
Jacob likes to lay around the hosue in just underwear in the morning...so he asked if he could wear underwear.
"sure, under your clothes"
So then being smart he said "How about underwear, then clothes, then some more underwear" Sure. 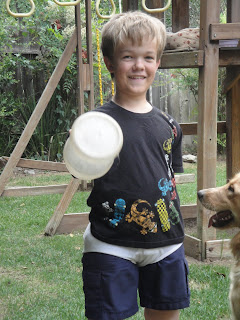 He really did it and then kept wearing it so of course we had to take pictures. 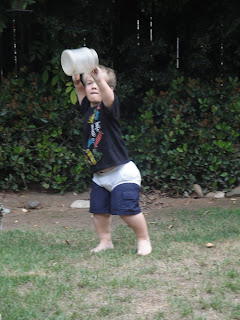 After he showed the cousins we made him take them off...I warned him this picture is going on facebook...:) 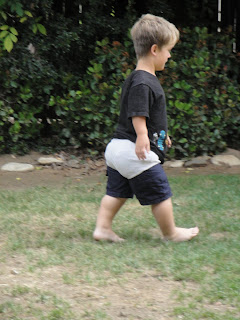 Happy Memorial Day All!
Posted by Christine at 8:06 AM

Great post Christine! Love the plates!!! They are gorgeous! I would have loved to hear Taylor play his first song, especially since we heard a rendition of it at WC. The underwear outside his clothes...Troy would have done that...loves to get a laugh.