This week has been a crazy one...
of highs like...
weeks of practicing culiminating in performances for all 3 children,  finally finishing our yearly taxes  (always a nightmare to prep for), and making yearly strawberry freezer jam with a friend.
and lows like...
doctor's appointments that took all morning, Taylor pulling something in his leg taking him out for both of his track meets this week (both his coach and I are so bummed after he did so well last Saturday and I'm hoping it isn't a season breaker)
and the everyday...
visiting teaching appointments, book fair volunteering (took it down last night), taking the dog for walks and of course trying to keep the house clean.
Taylor participated in what has become an annual piano festival down at Ramona where they perform 2 songs and 3 judges critique them and give them a rating.
He did great even though he blanked on one part of his song and had to go on.
The judges said he improved from the year before and gave him a lot of good comments. I thought he did wonderful. The highlight was to see his old band teacher from Earhart who had to stop the competition to come and hug us and see how he was doing in High School. 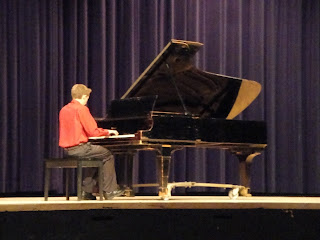 Ashley had a family picnic day at her school. I brought her a promised Wendy's lunch. 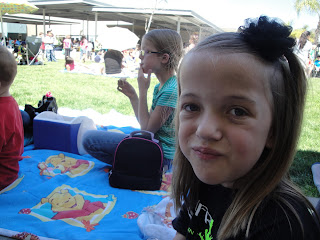 We found friends from the ward to sit with. It was crazy and loud and hard to walk but I was glad I was able to be there with her.... 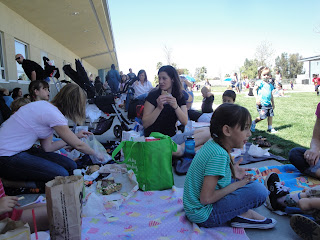 even though this crazy girl dropped 3/4ths of her hamburger on the ground and wouldn't eat any more of it, ate like 3 frys and then only drank 1/5th of her frosty saying there was hair and "stuff" in it...(even though it was fine) I don't know if I'll buy her a kids meal again. 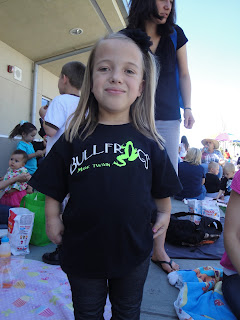 After lunch I worked at the book fair and then came out to see Ashley's chior performance.
They sang 3 songs that they have been practicing every week for 3 months. 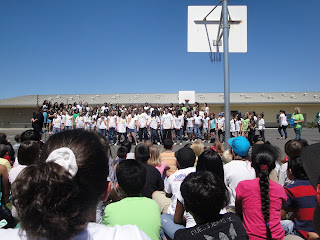 They did a great job! Ashley is all the way on the right. 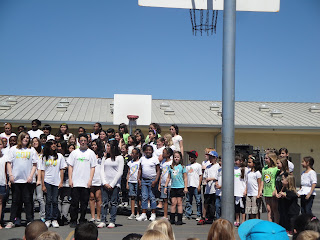 Other highlights...this week we made fish out of water bottles in Ashley's class to hang up for open house. 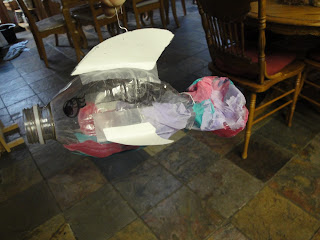 Taylor and Maddie finally found their last plant for their biology project.... 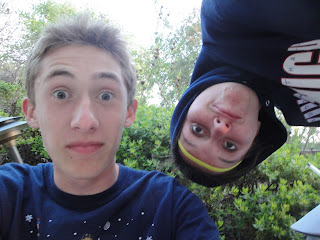 And of course the biggest highlight of the week was Jacob performing in the Wizard of Oz!
I got to help backstage with makeup.
I didn't do too much helping but I did get to watch Jacob's transformation and take some pictures :) 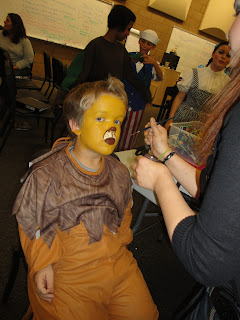 We had 5 kids from the ward in the play. These are 3 girls from the beehive class. Emily, Allie and Kaitlyn. 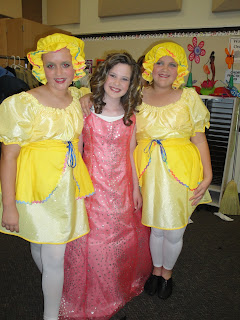 This girl that played Dorothy did a fantastic job.
(Her older sister was the one who did the fantastic job with Jacob's make-up) 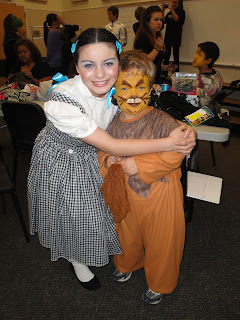 Some more cast members including David who is in Taylor's teacher's quorum now. 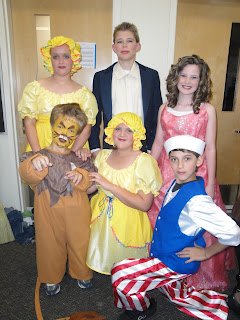 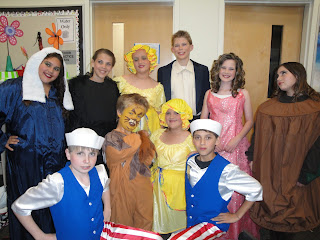 We were blessed to have all the family who could come out to see the play. Dale and his family and even Grandma Nelson drove down from Palmdale, Cheri and Ryan came from Redlands and Jenise from Yucaipa. 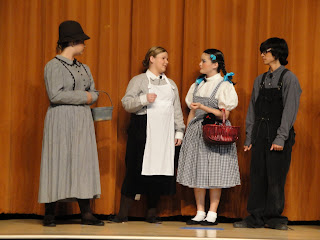 Honestly Jeff and I were worried with all of the family there how good of a play it would be...after all it was middle school.
I have to say other than some sound glitches and a couple of quieter cast members overall they did wonderful! Much better then I expected too. 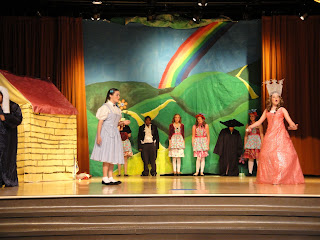 Of course Jacob did awesome as the cowardly lion. (I'm not biased at all :0) 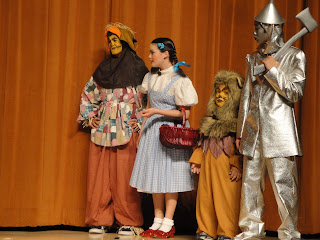 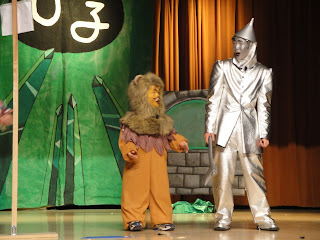 He hammed it up, got laughes from the crowd as he fainted... 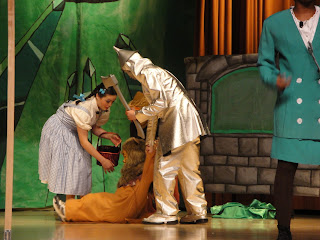 looked adorable as they pampered him... 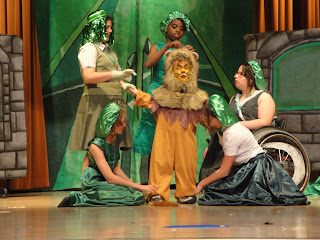 and entered onto the stage with a summersalt to give his bow. 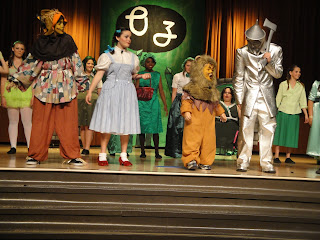 His singing was great, he remembered all of his line and he did a great job! We're so proud of you. 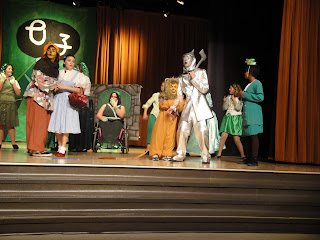 We were grateful for my brother in law Ryan who made a great montage of Jacob's singing and acting parts!
Go to this link to see it...http://vimeo.com/21758197
Posted by Christine at 1:41 PM