Hobos, smoking teenagers and a visit from friends.

This last week I have been the lucky mom to try and help Taylor and Maddie (not the dog) hunt down plants in Riverside for their Honor's Biology class.
They have to be specific plants...pictures have to be taken of both team members with the plants, and lots of stuff has to be recorded about the plants...
This trip was a quick one after track practice before it got dark. I took them up on the water tower trail behind miller.
The trip was pretty much these two goofing off with me finding the next plant that they needed to record followed by some more goofing off. (what would they do without me ;) 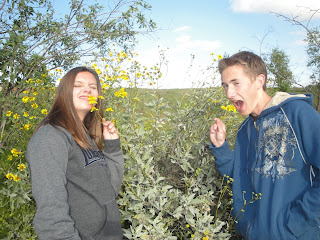 Taylor found this stick, called it Cudweed (which is one of the plants we never found) and said it was his pet dinosaur... 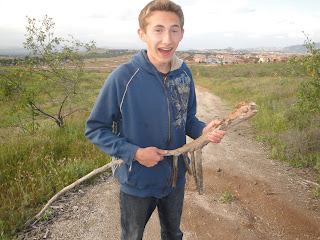 Maddie and Taylor declared this hole as a hobo hideout.... 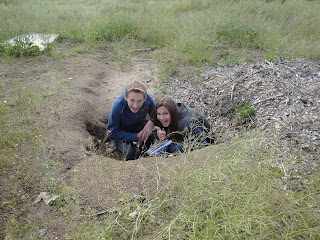 This matress was most assuredly the hobo's bed....they had to jump on it to check for comfiness. 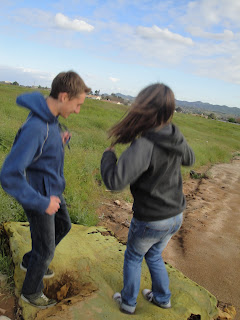 As we were walking back to the car we saw a couple with a dog walking towards us and we said "Look there are some hobos!"

We got closer and laughed because it was our friends the Elsworths who told me about this trail.
They said when they saw us from far away they said "Look at those teenagers, they probably were up behind the water tower SMOKING!"
How funny how we judge from far away! 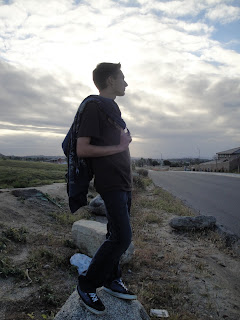 The next day one of Taylor's friends who lives across from the field asked Taylor "What were you doing up at the water tower with those 2 teenage girls yesterday???"
So I guess I look like a teenager....from veeerrry far away.
Good thing the real story is a lot less exciting than whatever other people had made up in their mind ;)

That same night we had the Nascimento family come and stay with us at the tail end of their California trip. They decided to take a break from Portland Oregon and come and do Disneyland for their spring break.
A trip with rain and snow that made them a day late still didn't curb their enthusiasm.


Audrey is their 6 year old daughter who loved to play with Ashley.
While they were here Audrey brought Ashley into the other room and asked her "Is your Dad one of the seven dwarfs???""
Ashley said "Suuurrrreeeee"
Audrey said "Which one!!??"
Ashley said "Grumpy"
Then Audrey said "I KNEW it! I told my mom he was!! 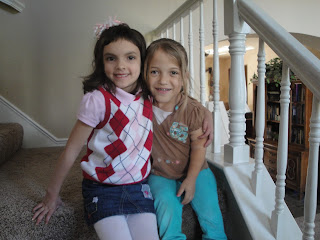 Our visit was short but long enough to remenisce and take time to go to dinner with Steve and Tahna and talk about old times.
Chris was Jeff's best friend as a teenager and Steve was their scout leader. 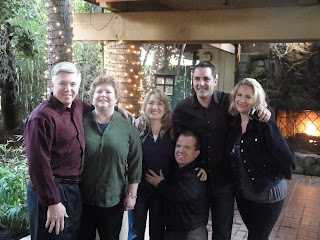 We heard all kinds of crazy stories...some of them involving Steve's younger, crazier days.
It's a wonder that they guys survived some of their "adventures"! 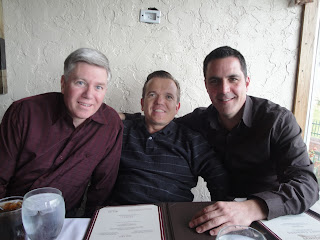 Our view from the top of the restaurant. 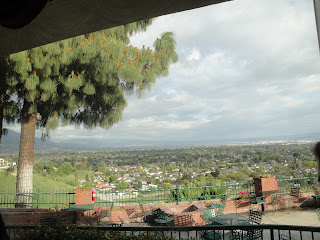 We just enjoyed the crazy stories and the good food.
We look forward to seeing the Nascimentos again sometime
(hopefully during a vacation without so much rain) 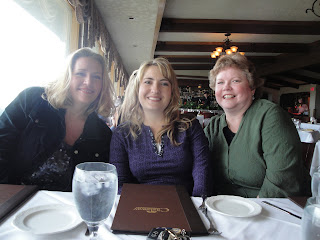 We stayed up until late talking and then Taylor and I got up at 4:45 the next morning for the Azusa invitational distance only meet.
We left the house at 5:30 to get Taylor there in time. What was nice with this invitational was that there were so many people competing they all got to run with people that were their same skill level. 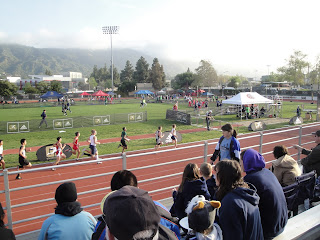 Taylor ran the 800 and was the front runner for a long time until a super fast guy passed them at the end and the number 2 guy that he battled with the whole time finally pulled past him. 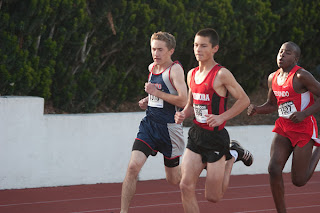 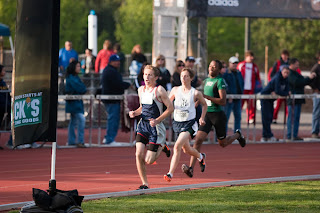 Taylor getting a snack between races (we had 3 1/2 hour to wait until the next one)
Taylor was starting to tire out as it was time to run the mile and was almost wishing he didn't have to run until he got back from the bathroom thinking they already had called his heat and he missed it. Then he was really bummed until he realized he didn't miss it. 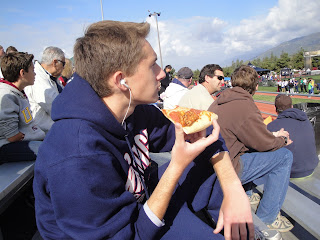 He ran hard coming from behind and taking a wide berth around the runners that had been blocking him in to run the last laps in 3rd position. Just as he was nearing the finish line he heard teammate call to the number 2 guy to hold strong to the end. He saw that the guys was slowing so he came up on him and beat him by a photo finish and .002 seconds to get 2nd place. He improved his mile time from 5:26 to 5:09!
So he ended the day with one 3rd place medal and 1 2nd place medal. 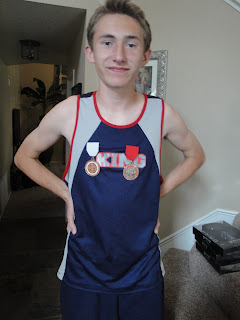 It was a fun day to spend with Taylor, I had fun and I was so proud of him.
Of course Taylor isn't the only one getting awards.
Ashley got an award for being on the honor roll. 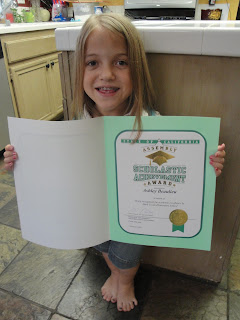 And Jacob's award ceremony for getting straight A's (way to go Jacob) is coming up next month.
Posted by Christine at 3:44 PM

Taylor is a player! Kidding. :) Wow, you are a busy woman. Can I hope my kids just never get older? Keep them young?...Well, I might not get any sleep...So what must happen will happen!