Blood! Drugs! and bad Poems! Whats our schools coming to??

Bloody Track Practice!!
I dropped Taylor off at track practice on Saturday in the cold rain (he insisted he was fine just wearing shorts and a T-shirt).
In 25 minutes he was back again, freezing and...covered in blood! 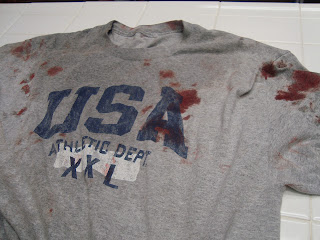 He had gotten a bloody nose about a mile out and couldn't stop it. So what else to do but take off your shirt and use it. 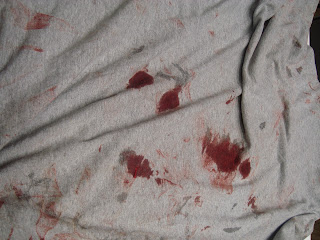 His shirt looked like a murder victim's shirt by the time he got home and his hands not much better (though a lot of it had come off in the rain)
He got some weird looks as he ran home bloodied and shirtless in the rain...at least one good samaritan stopped and asked him if he was all right.
He was freezing and bloody but after a hot shower he was OK. 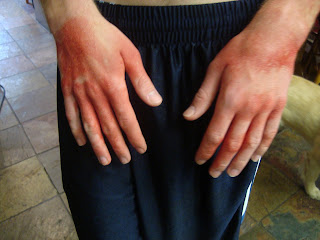 (he posted the pictures on facebook without the explanation and had his friends worried for awhile)
Drugs!!
Jacob came home from school a couple of weeks ago telling me that there was a drug sniffing dog in their 6th period class. I asked him if it was for a police demonstration. He said it wasn’t
he was sniffing for drugs.
"Scary!" I said. Then Jacob said he was scared because he had valentine’s candy in his backpack and he thought the dog would smell it. I asked him if the dog found any drugs and good thing he didn’t. Pretty sad they they have to sniff for drugs in 7th grade!
I was very glad that all my son was worried about was his Valentine's candy, however I was sad to hear that 7 students at his school were expelled for selling drugs! 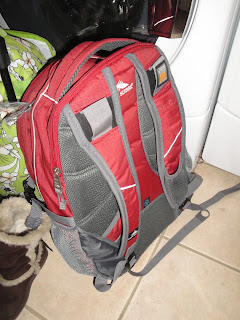 Bad Poems!
At school Taylor had to write a 10 line rhyming poem with an A, AB or ABC pattern.
The teacher said if you couldn’t find a word that rhymed with another one technically you could use the same word again.
Sooooo Taylor came up with his poem and then asked if it counted.
Teacher: Well it doesn’t fit with the spirit of the assignment
Taylor: But does it count?
Teacher: Well you won’t have as much practice for the test…
Taylor: But does it count?
Teacher, reluctantly: Yes.
So he turned in his poem… 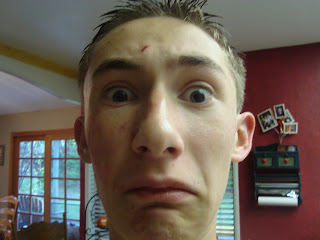 So what do you do when your son has decided to live his 5th grade teacher's motto to the fullest. "Work smarter, not harder"
Posted by Christine at 3:47 PM

7 kids suspended for selling drugs?!?! In the 7th grade?!?! Wow, that's crazy! I love Taylor's poem, and I think the motto's great! Rob lives by the same one.

I love his poem. I would not have been smart enough to write a poem like that. He must be a left brain gifted child.

Not so good about the drugs.

Taylor cracks me up! Erin told me about the drug thing today. What the heck!!! And this is the school my daughter is supposed to go to next year? I just want to put my kids in a bubble. I know everything will be fine, but still.

I read the drug part to Eli and I think we are finally convinced that pulling our kids from public school is the best thing for them. We've been on the fence for awhile now about home schooling vs public school...home school sounds better and better.

I can't even put into words every reaction I had from the post! I have GOT to meet your family one day, lol.

That is CRAZY about the drug thing!!! I'm glad they are doing it!! I wish more principals would do it though. Doesn't mean your school has a bigger problem, just that your principal won't put up with it! Love that!!!
Great poem Taylor!!