This last Friday was Ashley's 9th Birthday!!
And...for the second year in a row she was sick on her birthday.
She woke up not feeling good and with enough of a fever that I had to keep her home. 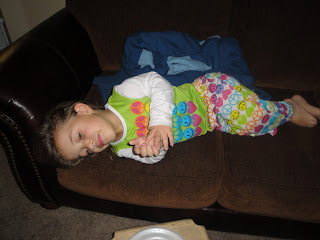 I had spent hours the night before finishing her "bullfrog" cupcakes (to go with Mark Twain bulfrogs) and now she wouldn't be able to bring them in. 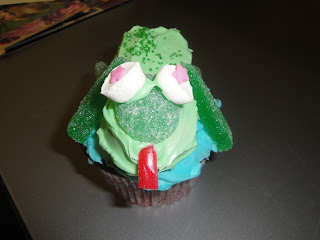 Well we dropped them off anyway on the way to the doctor's. She was set to have her party that night so I wanted to make sure she wasn't going to infect anyone! The doctor checked her out and declared that she just had a common cold and not to let people drink after her or give her BIRTHDAY KISSES (she blushed at that one).  So the party was on!
After months of dreaming up what she wants for her party she finally got her "Late Over"! 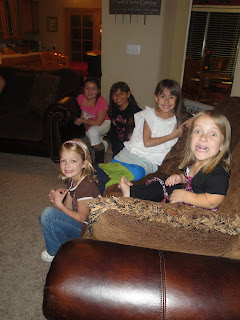 We started off the party by eating pizza and letting the girls play Knect. They started out timid but by the end they were all joining in jumping, moving and being silly. 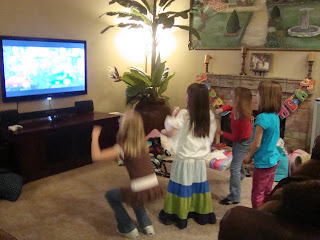 Then it was time for games. We played "hot potato" which was a favorite party game growing up. You wrap a present a bunch of times and the kids pass it around until the music stops and get to unwrap one of the layers. The last person to unwrap gets to keep whats inside. 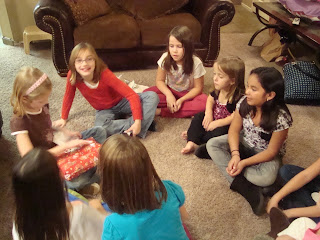 Then we played a memory game where I had a bunch of stuff in a pillowcase and they had to feel around at what was inside of it and then remember as much as they could.

"Is there broken glass in there???" I assured her there was no broken glass "Good, because if I got cut on it my parents would be very mad!" 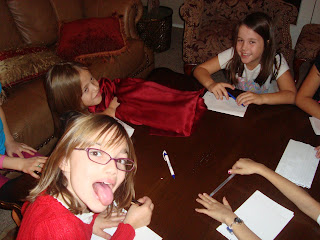 Then we played the gift exchange where you could steal each other's gifts. They kind of liked it by there wasn't a lot of stealing going on because the girls were too polite. 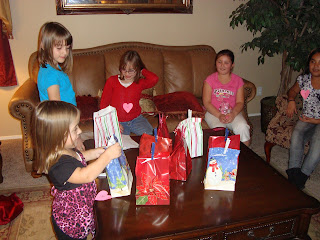 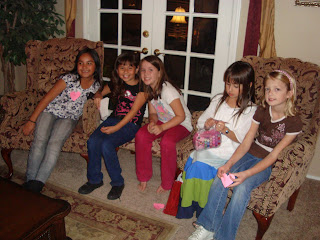 The last game was glow stick scavenger hunt. They were running all over the house to get the next "clue" along with glow sticks. By the end they all had glow sticks, candy, nail polish and a gift set from the gift games.

Ashley had requested a pinata right before the party but I nixed it..."besides it'll be dark" I said (I really didn't want to mess with it). 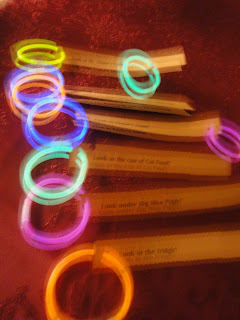 Here is Ashley's "late over" cupcakes inspired by my new Hello Cupcake book. 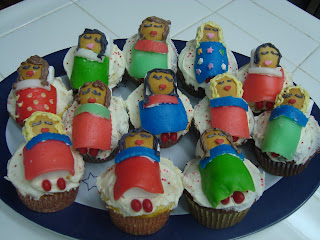 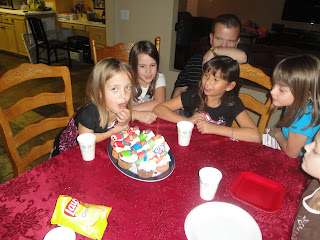 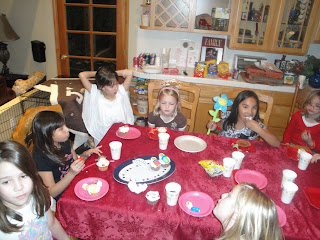 Next the girls all changed into jammies and snuggled with their pillows and blankets they brought and we watched Toy Story 3.
Along with popcorn and candy it kept them entertained until parents picked them up (except for 3 or 4 girls who went upstairs to tell secrets) 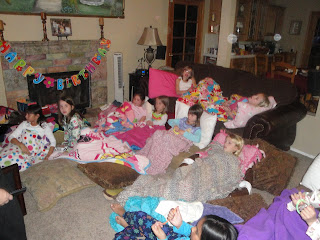 The next day Ashley's cold came on full force.
She hung out in her jammies and got to play with her new toys. 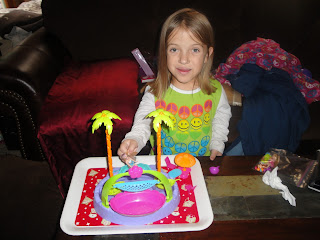 And enjoy her new snuggie thats just her size! 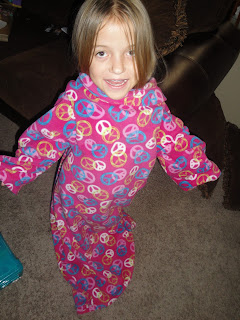 By Sunday I was feeling it in my throat. Got through my Gospel Doctrine lesson but barely my voice was going...going...gone by the end of the lesson.
Ashley and I are sicky twins right now.
It's dragging on so long I actually took her back to the doctor...just a cold he said.
Hurumph ... a miserable cold.