Feeling old ... but not as old as Jeff which gives me a little consolation ;)

Sadly, when you get older your birthday is just a day to everyone else, even more so when it’s sneaks up in the middle of the week. Friends are too busy to do anything other than wish you Happy Birthday on facebook or in passing…and life moves on.

Luckily I have a husband who was sensitive enough to realize the lack of anyone to celebrate with would make for a long depressing day. So he invited me last minute to his lunch appointment with his brothers so at least I wouldn’t be sitting home alone. 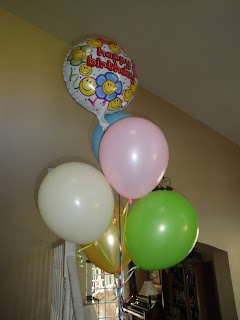 They were sweet enough to invite my sister-in-law who brought balloons and my only gift (Thank you Tahna my “car jewelry” is in my car right now and I think of you every time I see it).

The rest of the day went on like any other…including having to attend Relief Society Presidency training at the stake center. Again my wonderful husband tried to make the best of it…I came home at 9:00 at night to this sign on the garage door. 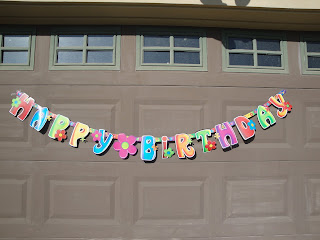 Jeff and the kids made a pizzooki while I was gone to share for dessert and sang to me. They all wrote me letters and gave me a birthday card. Melted my heart. (Especially Taylor’s, would make any mom of a teenager proud) 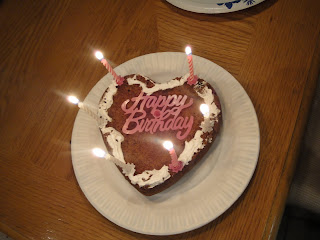 I found out later while I was gone Jeff also called my scrapbook buddies and tipped them off about my birthday too. So the next night Cindy made me a great chocolate cake. Thanks Cindy (and Jeff)
Saturday Jeff and I went out to dinner to celebrate just him and I. Jeff was willing to drive down to the Rusty Pelican in Newport even though he was tired and stressed about speaking the next morning. (He was speaking for a Jewish men’s group.) I love the seafood at the Rusty Pelican. 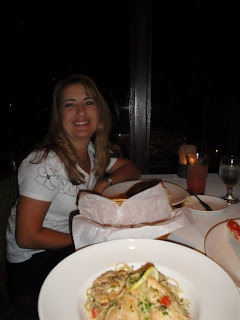 Thank you honey for making my birthday! I’m so lucky to have you in more ways than one!

Jacob went to his first dance at his school on Friday. Taylor never wanted to go to any of his junior high dances so I wasn't sure what to do when he asked not knowing wether I should let him go. We'll it was from 2 to 4 in the afternoon so I didn't think it would be too serious. 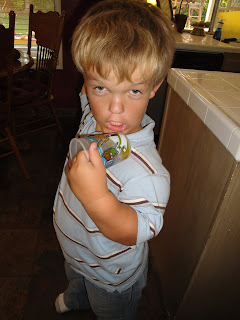 He came home tired after dancing and running around with his buddies, but he said he had fun. Jeff had tried to tell him what to do if someone wanted to have him dance slow...but I was glad to hear that they didn't even play any slow songs. He said girls wanted him to dance in their group a couple of times but he was too shy and told them he didn't know how to dance well enough. Fine by me ;)

Jacob also had his first soccer game this Saturday...thank goodness for soccer because without it he would be here all day... 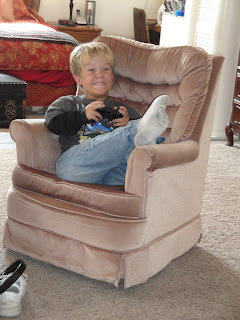 He said he did pretty good, he said the game helped him start to remember his soccer skills, but he knows he's got to get in better shape. Hmmmm I wonder why...too many video games I think.

Jeff was the only one who saw his game because the rest of us were at different places on Saturday.


I was with Ashley at a cheer parade... 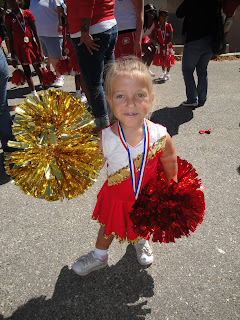 We almost didn't make it in time because I slept in too long! After getting home late from scrapbooking at Cindy's and then dropping off Taylor at 5:30am I fell back asleep then woke up at the time I wanted to be in the car since Ashley's parade was in Banning. 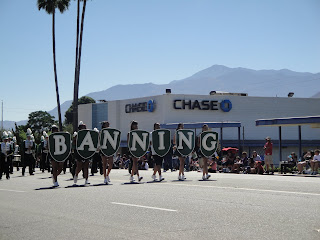 We raced through the badlands at 80 mph and got her dropped off with her group and I sat down at the end of the parade route with 5 minutes to spare. I got to observe lots of interesting people while I was there...I was glad I was there in broad daylight (just kidding it wasn't thaat bad). 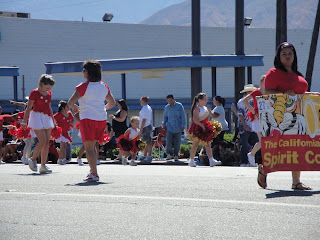 There is Ashley in the back
Honestly the parade wasn't too exciting until the cheer girls got there (I was only thinking it but the people around me were saying it). We saw lots of cars of people waving, no music, no candy throwing and no announcing of who anyone was so when the girls got there with music and dancing the crowd loved them. 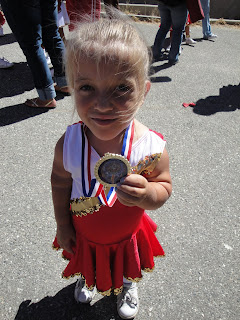 here is her participation metal
One Banning resident was clearly not impressed with their performance however. As I was walking Ashley back to the car a pretty interesting looking lady and her mom told Ashley and I in great detail how it was much harder when she was a cheerleader with Ashley's group.  Her choreography was so much harder and better. Ashley's choreography was nothing and her parades were 2 to 4 hours long and their music never stopped...and so on and so on.
So we nodded politely and I made sure to praise Ashley once we got to the car.
Ashley has liked doing cheer but we decided this week that with our schedules all being what they are she's not going to continue. Maybe next summer she can try it again ;) Her sweet teacher wasn't going to be able to teach the next class anyway so it's the perfect time to move on. 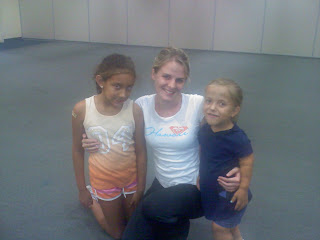 It's been interesting getting adjusted to a school schedule again and making sure everyone gets what they need to get done, done as well as getting everyone to where they need to be. Ashley can't function without a little down time...I can often find her in the backyard doing experiments or playing with the cat. 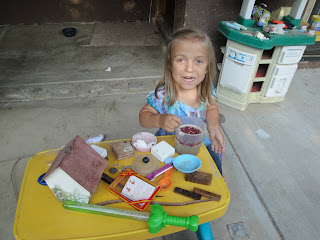 Her favorite things to play with are recycled trash (which she pulls out by herself) and nature things she finds in the yard. She found this stick that looked like a flag to her... 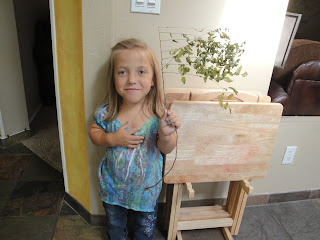 I found if I let her have some unstructured nature/cat time for awhile she does better on homework later.

Taylor has had a busy week of hanging out with friends, study groups, a church dance and a Nacho Libre viewing party.

He also had his first cross country meet!! 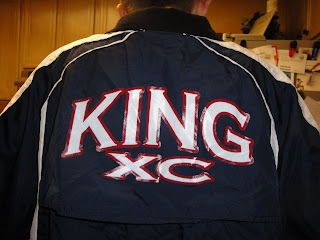 Friday night he had a spaghetti dinner at a team mate's house to give them a good pasta meal the night before. (This was in a addition to soccer practice, Stake volleyball and my scrapbook night so Jeff and I were all over town)

He got his outfit to wear for the meets on Wednesday...along with the daisy duke shorts that Taylor dubbed the cross country speedo...so Jeff and Taylor went over to Kohls to buy some spandex to put underneath his "speedos".   :)

On Friday he wore his shorts tp go along with some boy's teamate tradition...I told him to bring an extra pair of pants just in case. I think he used them at seminary when he got laughed at...(good thing he brought them ;) but then he wore them the rest of the day. 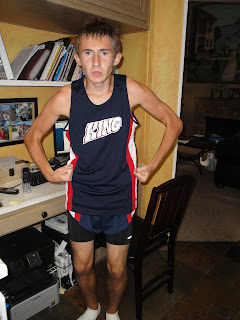 5:30 came early on Saturday! At least I got him up and packed up his lunch since niether of us could go watch his meat (Ashley's parade and Jacob's soccer was at the same time). 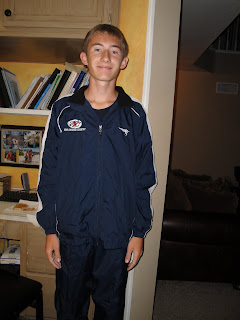 His time was 19:32 for his first race which is at least 3 minutes less than his he qualified to get on cross country with.
I was excited for him but he wasn't happy with it. He was the 3rd slowest Freshman boy and bemoaned the fact that all the boys who he normally runs with blew past him.
He says the difference was their shoes. They bought these racing flats that are these running shoes without all the padding just for races. I guess they make you feel like your barefoot and weigh 6 ounces or something. When I asked him if he wanted them when they were being sold at the school he wasn't interested...until he saw what they can do for your time.
Now they are all they I hear about. I think we're going to have to go out to Redlands this week to go buy him some or I'll never hear the end of it.  :)
I'll end my post with a story that Taylor thinks is hillarious...
Yesterday Taylor answered the phone and made his voice really deep. It was Charlotte which is an older lady from church.
Taylor tried telling her that he was Jacob and continued to have a conversation with her in his deepest voice (trying not to laugh). When he handed the phone to me Charlotte commented that Jacob sure sounded like his dad.
I laughed and told her it was Taylor just messing around.
Deadly serious she said “Ohh, I thought Taylor was very honest!” She sounded very dissapointed.
I said that he liked to joke around just like his dad. She said “Oh, that’s too bad that you have two of them in your house.” (like it was the worst thing in the world).
Posted by Christine at 12:46 PM

Oh Charolette!! You are running here and there all the time...do you wish for down time or do you love going non stop?? Happy Birthday!

Happy Birthday!! Glad your hubby made it special for you. I love the story about Charlotte, I can hear the words in my head, too funny.