Every year Cee cee Gardner orders peaches, plums and pears. It's a wonderful thing she does and I know it's tons of work! Every year I usually order peaches and can them. Last year they came in while we were on vacation so by the time I got them they were rotting.
This year Mary Ann and I decided to share a lug and just have them to eat. We weren't planning on canning them and we were just going to sit back as the rest of the ward frantically tried to process the fruit they ordered.
When the lug came we realized how many peaches 1/2 a lug was! 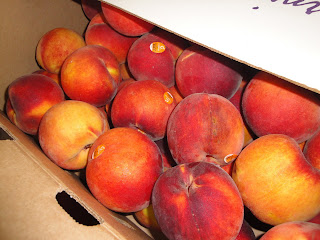 I had a table full of peaches.The first day I ate one and it wasn't ripe enough. I waited 2 or 3 days and the next was 1/2 over ripe. I quickly put them in the fridge and tried to offer them to my family. They really don't eat many peaches so I realized I had to do something quick.
So I broke down decided to make peach jam.
So for my future reference (and for anyone else that would like to know) here is the steps I took.
I washed the jars in hot soapy water and made sure they were dry before using them. 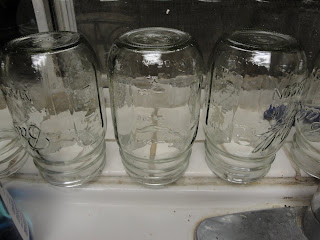 Then I dipped the peaches in boiling water for about 30 seconds and then put them in a sink of cold water to peal the skins off easily. 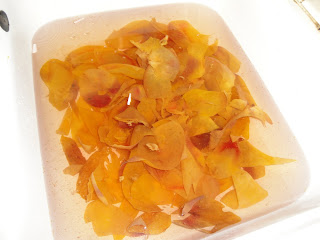 After I pealed them I put them in the other sink filled with cold water, where they waited until I was ready to slice them. 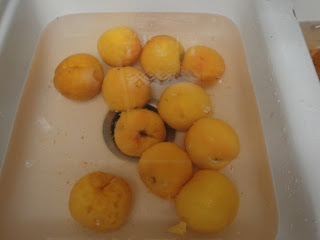 I sliced them and tried to cut most of the red stuff out (the stuff surrounding the pit). 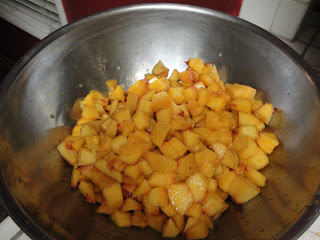 After they were all sliced up I put them in the blender and chopped them up using pulse (not puree so there would be some small chunks in the jam). 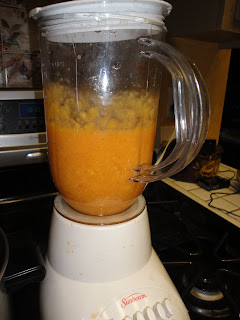 Afterwards I put in lemon juice and followed the recipe on the pectin packet to add the sugar and pectin to the jam cooking it until it came to a rolling boil for 1 minute. (I also added a little butter to the mixture to cut down on the foam)
After it was done I ladeled it in jars to 1/8 of an inch from the lid. I had the lids in hot water to get them soft and put them on the jars as soon as they were filled.
After the peaches were done I had to boil them in my homemade water bath. Since I don't own a water bath canner and the few people that did own them were loaning them all over the ward I just put a hot pad in the bottom of my largest pot and filled the pot up enough to cover the bottles of peaches. 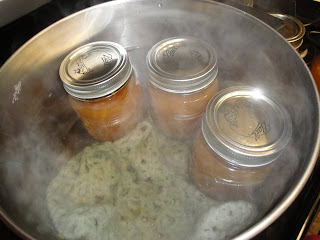 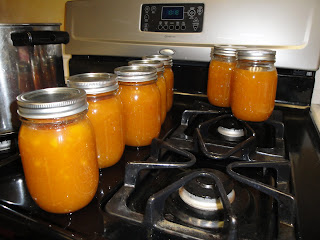 Maybe not cheaper than buying it in the store but I think it tastes better and I have the satisfaction of doing it myself. I have fond memories of my mom canning everything from grape juice, to tomato sauce growing up while rocking out to ABBA music. I'm ashamed to say I never tried to learn how to can until Cee cee showed me how with the peaches. All I was missing was the ABBA music.
Posted by Christine at 10:17 AM

Abba. LOVE IT!! That was all my first roommate in college listened to. Rocked out every afternoon after our homework was finished. :) (When I did my HW, that is!) Glad you ended up with some peach jam after all... BTW- the pectin is MUCH cheaper at Winco- we paid $3 for two packets of the liquid pectin... Jars are cheaper there as well. ;)