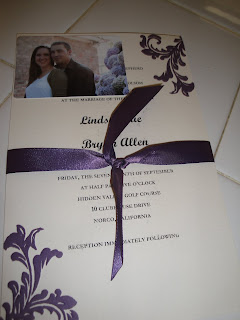 This weekend Jeff and I attended Lindsey Shepherd's wedding.
Her present was from her registry at Bed Bath and Beyond. They even wrapped it for you! When I realized that the colors matched her wedding I used her invitation to make her card. 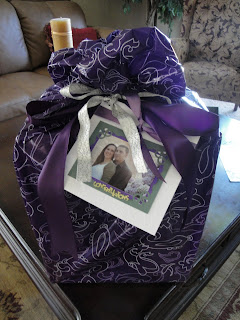 Pretty much the whole gift table matched! :)
Jeff thought the store knew her colors and wrapped the presents to match but I told him the store only had one color of wrapping and it just happed to be the right color.

Here is Lindsey and her Dad walkind down the aisle. 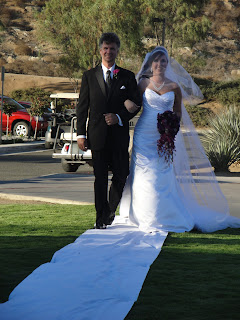 We got to meet the guy that has been making her happy for the last 3 years and celebrate her special day with her family. 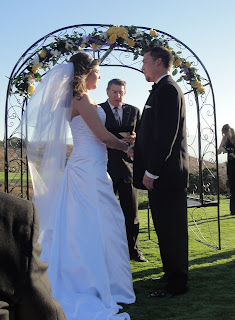 We had fun hanging out with the Williamson family at our table...both young and old...and we got to meet Doug's brother and his wife. After Jeff being Jeff during the ceremony Doug's brother said "I want to sit at your table because it'll be the fun table." (ha ha) 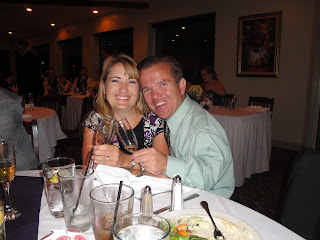 This week I was also pleasantly suprised with some post birthday celebrating. First Shawna B invited me to lunch. We hung out at Chipotle's catching up and enjoying some great food while Landon fed the birds  his chips. Thanks Shawna!

Mary Ann was hoping to join up but got held up by Mr. Repair guy but she dropped off  this... 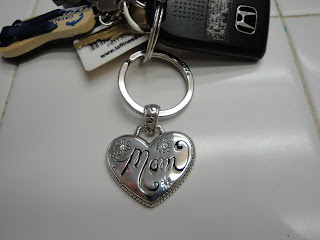 On the front it says Mom and on the back it says... 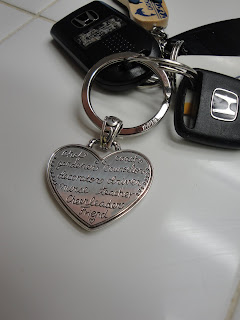 Chef, coach, gardener, counselor, decorator, driver, nurse, teacher, cheerleader, friend.  I love it! (Reminds me of my blog description).
I also got a drop off from Amy Stubbs while I was at soccer practice with Jacob! Jeff was trying to have them join us for my birthday dinner but their anniversary won out ;)
Funny story...Amy texted me at back to school night and told me that she had put a plate of stuff on a table in the front yard to keep it away from dogs. I texted Taylor (who was home) and asked him to get it from the front yard. When he located it he texted me "what do you want me to do with it?" I told him to bring it in the house. 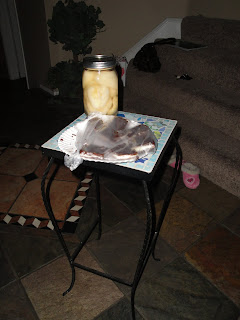 So he brought it in the house...patio table and all.

Jeff and Ashley and Jacob got back from soccer before me and were waiting impatiently for me to get home so they could try a brownie. They didn't want to eat any before I got home since it was supposed to be for me. Taylor announced that they were really good as I was passing them out (he already had helped himself).

This Saturday the house seemed empty for most of the day. Ashley was off for the day at Knotts Berry Farm for her friend's birthday and Taylor was at a Cross Country race in San Diego. 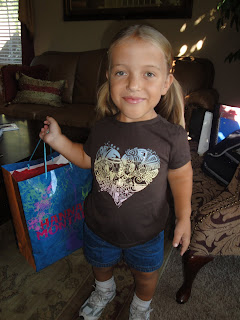 They invited Ashley before they knew she already had a pass to Knotts, including free parking.
Lila's mom was happy ;) and Ashley had a great time.

It was weird for Jeff and I to go to Jacob's soccer game by ourselves! It's going to be lonely when the kids are gone some day! The good thing is Jacob got some one on one time with us and it was fun to focus just on him. 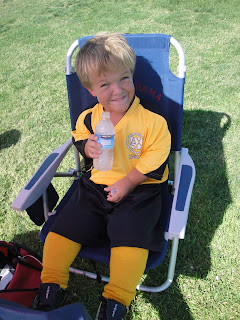 ﻿
Despite frustrating reffereeing Jacob's team won 4 to 3!
(Jeff's going to referee class next week, I'm curious to see how he'll like it.) 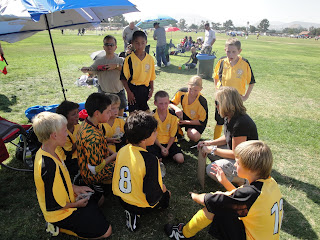 Later that afternoon we found out how Taylor's race went this week.
I was curious because last week he was pretty bummed about not having the "right shoes" and felt like it affected his time. I think the race also gave him an idea about the real competition that was out there.
He has really stepped it up at practice this week trying to push himself more. Part of the reason he's pushing hard is because the coach hasn't moved him up with the rest of the freshmen boys to the faster running group. Because of it he's training with a slower group of runners (pretty much all girls) and he feels the work outs aren't challenging him enough. He approached the coach about moving him up but he said he'd have to be more consistant. On their slow days he was running with his friends to chat (girls) and asumed those days didn't matter. Well now he realized they did so he determined to work hard to prove himself.

I designated the only day that we didn't have anything going on in the evening and we went out and bought Taylor his racing flats. He was so excited about them he wanted me to take him out to try them out after practice (even though he had just ran 5 1/2 miles) 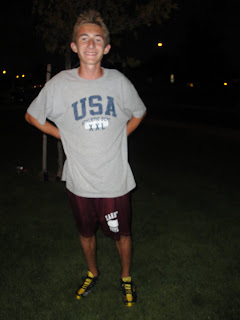 He had beat his personal best time for the mile at practice and wanted to see if he could beat it again. He didn't but he was still happy with the shoes. 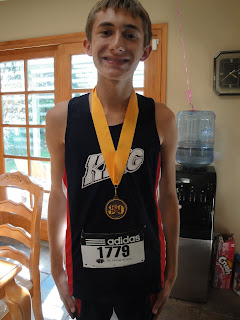 We were pleasantly suprised that Taylor won a medal in his race!
He raced against about 200 other boys and you have to be in the top 60 to medal. He was 59 but he was happy because there were two of his teammates that were 61 and 62. 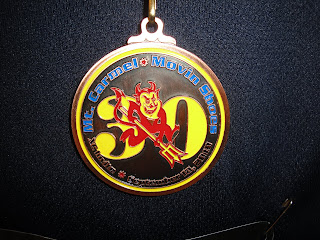 His time was about the same as the week before but the course was full of hills so everyone else's time had gone down. Way to go Taylor!
Saturday night Jeff and I saw Joseph and the Amazing Technicolor dreamcoat at RCC. They always do a great job. If your into musical theater it's a great place to go!
This week Taylor tried giving me a heart attack when he sent me this picture from his phone telling me one of his friends had pierced his ear during lunch with a pin. 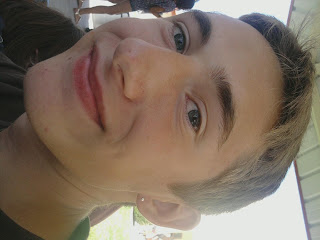 I asked him if he was kidding and he said...
...but don't worry they sterilized it with someone's lighter.
About a week before Jeff had been telling the kids a story about him piercing his ear when he was a teenager for fun. He said he pierced it but then took it out later that day because it hurt and his ear was red. The kids were in shock! I couldn't believe Taylor would do the same thing!
When I got home I realized he didn't. It was some rhinestones that fell off of one of the girl's pants.
This week I've been cleaning out closets and cupboards to try and do some cleaning. I worked at DI and it's gotten me in the mood to go through our "stuff" and de-clutter.
When Jeff's electric razor starts getting dull he always gets frustrated at how much the blades cost. They are usually a similar price as a new razor (especially if your getting it at Khols for 30% off), so he'll get a new one and put the old one under the sink thinking it's still good and maybe he'll get blades for it later.
This is what I found when I cleaned out the sink... 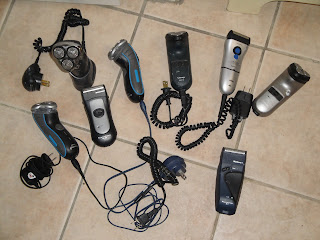 Ashley and I laughed when we counted 8 electric razors!!
Posted by Christine at 3:41 PM

That pile of razors is funny :) It looks like something I would do.

I just have to say I am glad I am not the only one with hidden piles of "stuff" around the house. Now, gaining a desire to get to them, that's another story;) Good for you!

Love your blog Christine! You are such a neat lady, sad you guys moved right after we moved into the ward. I guess we have the tendency of making people do that!;-)
You guys, Haun's, Cheeks and McAbee's!;-)