At our house the week didn't start out so great...I missed the first day of seminary!
I had set the alarm at 5:45 to get up and see my first child off to seminary. I wanted to make sure he had a lunch and give him a big hug. Well I guess I never turned on my alarm after I set it and I woke up to Jacob saying “Mom can you hem my pants?”
"What day is it??" I ask (I thought it was Sunday). No it was 6:30 on Monday and we had to get him and Jeff out the door in 25 minutes! So we scrambled as I hemmed, Jeff showered and Jacob started on his lunch.
I was sad that Taylor was picked up by the Paiges on his own without anyone to even say goodbye to him.
When he got home about 5:00 I felt horrible when I asked him how his day was he said “I didn’t have a lunch and we ran 6.7 miles today!” I guess his ride came as he was starting to pack his lunch and all he got was a yogurt before he ran out the door.
So the rest of the night last night he was hungry, cranky and feeling sick.
So sorry Taylor :(...I felt so bad.
I think he forgave me though because today I packed him a HUGE lunch and in 6th period he sent me the best text..."I love you mom! You're my favorite mom!!" What a way to make my day :)
So I had to show him some love by making brownies today.


So after the razzing we all gave Jeff about Brad Wilcox, he thought he'd send him a nice e-mail to show him he wasn't blowing him off.
Brad was VERY nice and sent one back the next day giving Jeff compliments and letting him know he wanted his contact info to give to the guy in charge of EFY. He thought that Jeff's story, style and delivery would be great for EFY. We'll see if anything become of it, and even if not it was nice of him to say :)

Ashley was feeling the love with the "friendly letters" they exchanged at school yesterday... 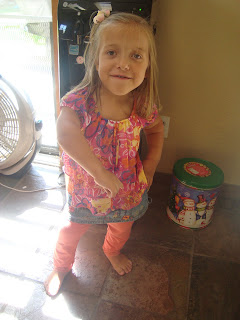 "Dear Ashley, Hi I just want to tell you hi. And try to be good in school and home but I all ready know you’re going to be good and stay that way and you look good today and this is your friend Mikey.
Your friend, Mikey”
Ashley thinks Mikey likes her a little because he's always trying to hang out with her at recess and he always makes comments on her outfits....he said he liked this one yesterday :)
My nature girl was also showing love to this leaf bug we rescued after it somehow took a ride on Jeff's car for at least 4 miles without blowing off. (Some of his ride was on the windshield and he still hung on) 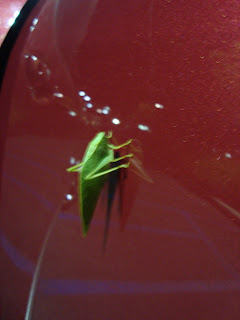 When she found that he flew into the garage she made sure I rescued it right then! Love my nature girl! 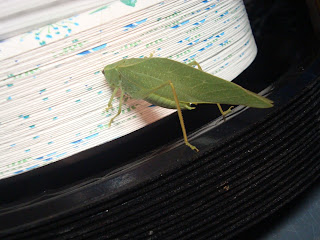 Jacob was feeling the love at school again when 3 "hot" girls came up to him at lunch today and said “I heard you were really cool, can we have a hug?”... 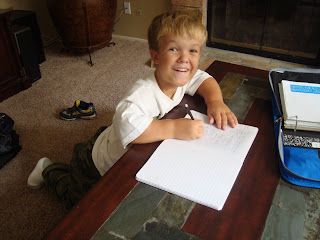 He’s a hugger so he agreed.
Then one of them asked him to hold her hand to class. This was out of his comfort zone so he told her to hold his friend’s hand instead. She said “But he’s not cute like you are.”
He didn’t hold her hand but he says he now wants to get a shirt that says “Free Hugs” on it.
Taylor has been checking himself out since cross country watching to see if he'll get a "six pack". So he finally has one (I can see it if he flexes...from the side...if I look hard :), a combination of running and probably losing the little body fat he had.
So humble Taylor was commenting on his 6 pack and his reaction from the girls was laughter and the declaration... “No, those are just cancerous bumps.” The other one said “They are infected bug bites.”
Feelin the love...
So Taylor got to show some love back...
Remember that toilet that Elise Bradford so generously gave us when she TP'd our house. 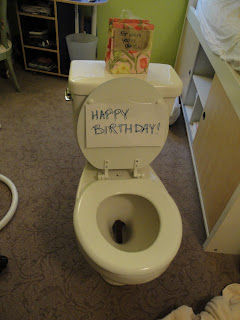 Taylor finally found a use for it. It was Alise's birthday yesterday. What a better birthday present could a girl have??!! In her bedroom no less...complete with an unwrapped candy bar representing gross items that usually reside in a toilet.
Not wanting Taylor to look like a complete troll, mom included lotion and a body spritzer for when shes done using her personal bedroom toilet hee hee hee.
Needless to say this prank was the talk of the "mormon friends" today.
I have heard from Simone Bradford that war has been declared...I'm scared.
Posted by Christine at 9:12 PM

Summer was pretty impressed with the toilet prank :)

I was wondering what was in that toilet. Good thing it is just a candy bar! And a total "girl" touch to add body spray. Love it!

Ack! I am totally behind on following blogs, but I loved reading this!! What a neat family you have.