Yesterday was the first day of school for all three of the kids.
Well technically Jacob and Taylor has a freshmen first day at the Junior High and High School that was like an orientation last friday...
So once I was able to enjoy freedom and peace and quiet I ...did lots of laundry, cleaned the house, went to the gym, got to talk on the phone with friends and before I knew it...it was time to pick everyone up from school and find out how their day went. (Boy my free time sure went fast!) 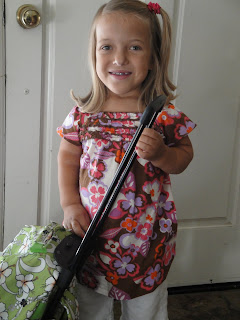 Ashley was the first one home. She came home and reported that her teacher wasn't too bad (she was worried about having a man teacher this year) but she did inform me that when the teacher did a poll to see how many student had pet dogs at home she was "very embarassed that she was the ONLY one that didn't raise her hand"...."See Mom EVERYBODY has a dog!"
I told her that if they asked who had a chinchilla, she probably would've been the only one to raise her hand. 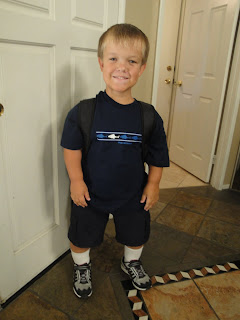 Jacob was the next one home, from junior high. I asked him how it went having to switch classes. He said the day was long but it seemed to go fast too.
He said at lunch there was two boys who were looking at him and snickering and then his fellow deacon Trevor from the ward came up and said "Hi Jacob!" and started talking to him. I guess the boys that were laughing knew Trevor and they got quiet and after watching Trevor with Jacob they were cool with him. How nice for friends :)
Taylor still wasn't home but we were invited to go to Frozen Yogurt with some other first day of school Mom's. I was pleasantly suprised that it was buy a mini get one free (every Monday from 1 - 4) so it wasn't even as expensive as I thought it might be. 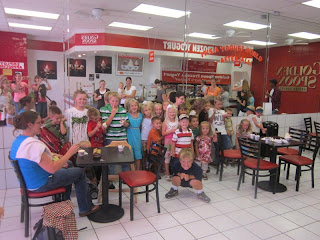 I guess these moms have this as a first day of school tradition but it was the first time we joined them. Fun! (Even though Ashley decided her combo that she got to pick all by herself and eat all by herself wasn't good and she threw 1/2 of it out)
When we got back to the house all Ashley wanted to do was try and get cool.
I don't know what it was but this summer didn't feel like summer until the first day of school! It was blazing hot today and of course all the kids have to be out in it!
Since we dont' have a pool we had to get creative...I turned on the sprinklers for awhile but since we have a Riverside ordinance prohibiting sprinklers before 8:00, and only on odd days, depending on the side of the street you live on...I didn't feel like getting written up so we improvised... 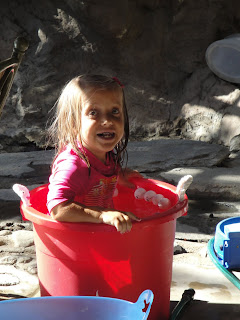 Finally at 5:30 Taylor came home from his first day of school. I had been waiting all afternoon to find out how his day had gone!!
I guess this is going to be his new life...gone most of the time busy with all his stuff going on :( ... I'm already missing him. 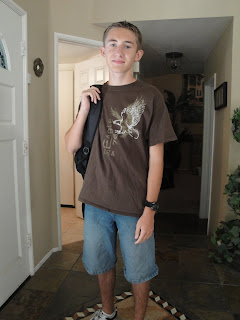 He had his Cross Country right after school was out so he had to run until 4:30 (in 100 degree weather) then wait until almost 5:00 to get his stuff out of the trunk of someone's car who was still running, then he stopped off at Juice it up, then he called me and said he had to stop at Cameron Paiges.
Cameron Paiges??
I guess he asked to come over and jump in their pool on the way home...no swim trunks...so he jumped in with his gym shorts and came home dripping wet and happy (no towel either)
I asked him if a group of them had gone to Juice It Up. (wondering why he would want to go)
"No I went by myself. I thought I would treat myself for the first day of school."
"How much was the smoothie?" I asked. (he had used his own money)
"Five dollars" he said
"Did you know it would be that much?"  "No I thought it would be like $2.00."
Welcome to real life son :)

This morning Piano lessons started...and now the year has really begun... :)
Posted by Christine at 3:20 PM

I love the first day of school ~ always have. Next year I'll have one in high school, one in middle school and one teaching college. Crazy!