Pumpkins and apples Oh My!

Nothing says fall like pumpkins and apples.
Jeff likes pumpkin seeds so he wanted to cut up the pumpkin I just bought so he could cook the seeds inside. I asked him why didn't he just buy a bag of seeds, but he said it wasn't the same ;)
I didn't want to waste the pumpkin so I thought I'd attempt to use it.
My roommates and I tried to use fresh pumpkin to make a pie once in college once and regretted it, it was so much work! ... but after processing the pumpkin this time I thought it wasn't too bad and I wouldn't mind doing it again. (Part of our problem in college was not having the right kitchen tools;)
So I cut up the pumpkin and cooked it (found out later that you can just cut it in 1/2 and cook it in the oven rind and all and then scoop out the stuff. 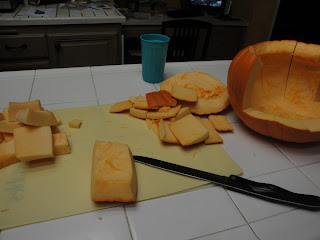 After it was cooked and soft I just put it in the blender.
It came out perfect! My small to medium pumpkin made about 5 cups of processed pumpkin. 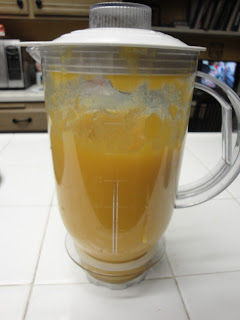 I used it to make pumpkin muffins.
They are the easiest in the world
1 can of pumpkin (or 1 1/2 cups fresh ;)
2 eggs
1 box of spice cake mix
Stir it up and cook at 350 for about 20 minutes.
I froze the extra pumpkin in a ziplock bag for later and I have to say I think that fresh pumpkin was better.
Yummy! 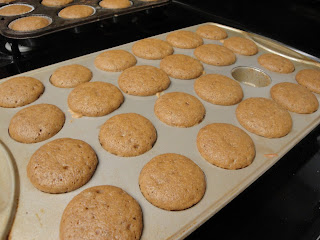 So on to the apples. We were coming out of our ears in them so first priority was to give them out for Home teaching and visiting teaching. I found these baskets at the dollar store (along with the leaves to make the cards) and we made some deliveries before the apples started going bad.
We got most of our people that way. Sweet! 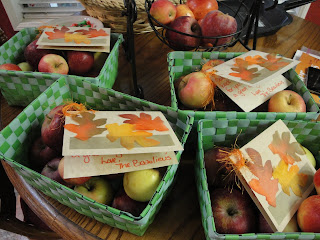 So on to the rest. The sweetest apples we brought home unfortunately were the first to start getting mushy. I decided to get brave and try canning applesauce and apple pie filling (heard about the other sisters in the ward canning them.) 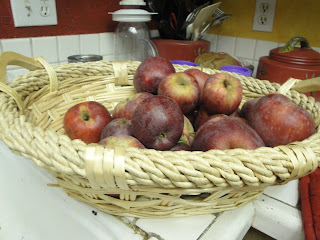 This device here was my life saver (Thank you Amy!!)  This was her apple corer, peeler and slicer. When it worked it was fabulous, though sometimes if the apples were too soft it would push through the center and just become a mess and I would have to cut them up by hand (much harder).
As I was cranking the apples through this little hole I was thinking how it was like us in life trying to follow the straight and narrow path. For those of us who can handle staying on the path the whole way through life things progress much smoother. There might still be some bumps and rough spots but generally the life ends up much smoother overall and our potential is realized more quickly. (The apple comes out cored, peeled and almost perfectly sliced)
For those who aren't able to stay on the straight and narrow path, maybe because we're soft in the middle and a little beat up from life they end up sitting on the sidelines for awhile and are only 1/2 complete until they have some help. Some times it worked to turn them around and try again. But for some even this doesn't work so they have to be dealt with individually, slowly, by hand. There results might not be as uniform or look like the others but eventually their potential can still be realized.
I thought about some of the people that I had the opportunity to serve in my calling and some seemed to need hardly any help at all and went through life without much need for anything but a smile and a kind word while others needed so much more individual care and attention. I guess thats why the Lord knows us best and trys to put people in our life that can help us on our path...whatever that ends up being.
OK sometimes I get a little philosophical when I'm doing repetitive chores for hours :) 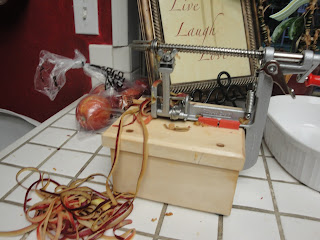 End result was jars of applesauce and Apple Pie filling.
Note to self: Use a potato masher instead of a blender when processing the apple sauce...I tried Piper's and liked the texture better.
Leave more space between the apples when pouring the syrup in for the pie filling...and it takes 2 jars to make a pie...using one jar for apple crisp was not enough apples
(one jar never sealed so I used it right away) 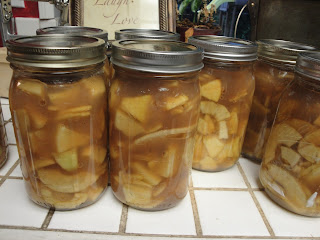 Besides processing fruit I've been working on jewelry...while catching up on conference that we missed when we were in Florida. It's been nice to listen to talks while creating.
Simone Bannister is having an open house and I'm going to attempt to sell some jewelry. I've given it away for years for free so I might as well try to sell it...we'll see how it goes. 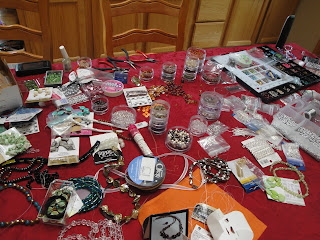 Fast recap for this past weekend...we decided last minute to take the kids to John's Incredible Pizza because we haven't been able to hang out with them much with all the busyness going on. (My kid call it JIP) We haven't been there in 2 years so I wasn't sure if they still would like it. It actually ended up being a fun night. Even Taylor enjoyed it. He complained about his ankle the next day but I reminded him it was probably from the jumprope game he was playing! Ashley was thrilled that she was finally tall enough to go on the "spinning ride" she loved it.
After we got home and put the kids to bed we ran over to Jeannie Williamson's birthday party. We were late but we wanted to show our support and love for Jeannie. Her children did a great job giving her a nice surprise party.
Saturday Jeff and I both left the house at 8:30. I drove over to the soccer fields and he drove to the temple to be an escort for Scott Vincent. Such an exciting day!  Jeff went through the session with the Vincent's and I drove out with Erin after the soccer game (got home with 15 minutes to change). Erin always makes things more fun so the fact that we had to wait a looongg time for the to start wasn't a problem at all. :)
It was so sweet to see their family sealed together. We were very glad to be able to be a part of their day.
After the temple we raced home and Jeff had 15 minutes before it was time to leave for Stake Conference Priesthood leadership. He got home in time to eat dinner and then him and I were off to the adult session about an hour later.
Jeff was fighting a migraine after marathon church day but it was really nice that at the adult session it focussed on a lot of musical numbers. We heard some amazing singers with a couple of talks thrown in between. It was a nice change. Afterwards we hit dessert with 3 other couples. Fun...looking around it was almost the same group we hung out with the week before!!  Ha ha!
Sunday after conference we offered dessert to the Steve and Tahna bunch and they said to bring it over to their house so we could meet Jenise's baby... 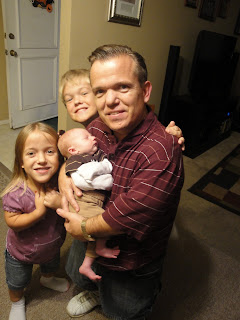 So cute!! We all took turns holding him...even Taylor who wasn't quite sure what to do with him and gave him back when he started crying. 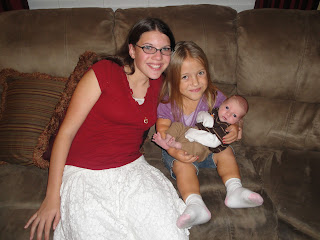 Posted by Christine at 9:12 AM

Thanks for sharing, you're such a wonderful Homemaker! I love those cookies you posted about, they're one of my favorites!

I have been pureeing everything else lately, so I think I am totally going to follow suit and tackle a pumpkin. Those muffins look great. I don't know how you keep up with it all! :)