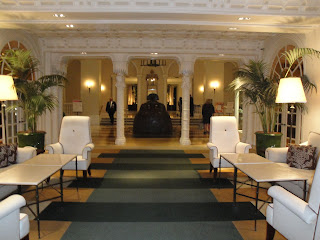 Day 3 came early as I woke up to go with Jeff to his meetings. (Figured since we didn't have kids with us I had no excuses;)  Really I didn't mind. I like to hear some of what Jeff is hearing and he says that the best speakers are on the first day. The company is nice enough to reserve Jeff (and me) a front row seat so he doesn't have to peer over anyone else. They even had a stool for him to rest his legs on. How thoughtful. 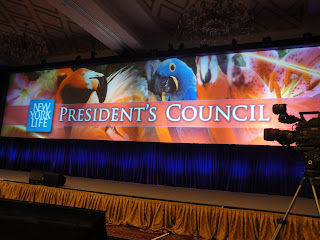 After all morning of meetings we were ready to get out of the hotel and DO something. We thought we'd go down and check out the beach. The water was warm but choppy from the wind. Jeff got in a roughed up a little and I just enjoyed the sun... 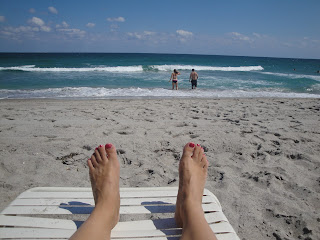 and the wind surfers (I think that's what they're called). 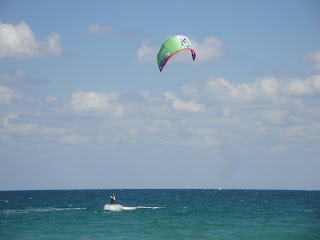 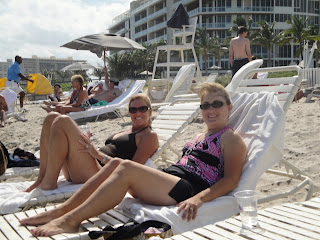 As we were getting ready for dinner we tried to take care of some "home stuff" that we couldn't escape. I thought I had taken care of all the food orders...I guess there were more needed so I was trying to get that arranged...Jeff had some work things...Taylor was sick and stayed home one day...and we were asked to be the leads in the road show...they even thoughtfully e-mailed us our script so we could get cracking on it right then. I have to say I was longing for the days without cell phones...when you could really go on vacation ;) 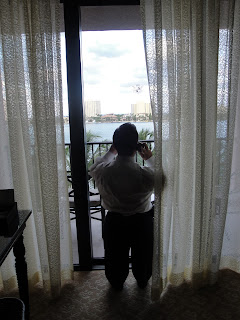 That night was the honor dinner, where we all dress up nice and have a nice dinner while hearing all the awards all the big guys have won that year. I don't think you could see this very well but all the waiters are in a  line just waiting for us to come in and serve us. 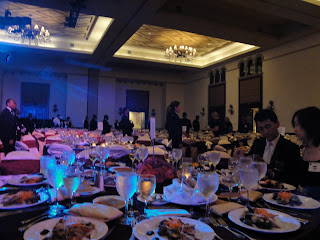 We got to sit at the table with the retireing CFO and his wife. We met them when we went to dinner with them in Spain two years before. This was the guy responsible for steering New York Life through the financial crisis due to his conservative investing. He's the hero that we never would've known we had until the crisis happened. 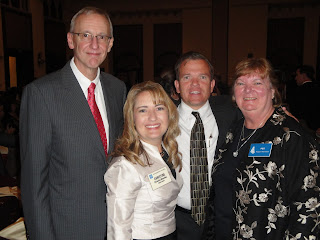 The next day Jeff went to meetings and I took a trip to the fitness center to try and work off some of the rich food we'd been eating. They had a really nice gym on site which included personal trainers for $80.00 an hour. I opted to lift weights alone and was probably only one of 2 or 3 that didn't have a trainer. It was definately different than LA fitness. The client next to me was an older gentlemen that probably hadn't worked out in years if ever and he trainer kept worrying if he was OK. (The guy didn't look to good). I kept worrying if he would fall over but he wouldn't give up. Finally his trainer tried offering him a Pirlosec he carries in his pocket...I don't think that will help.
After Jeff got out of his meetings we left for the airboat ride tour that we signed up for with New York Life. Our bus was 20 minutes late because they had to wait for the drawbridge (every time boats need to go through traffic stops). Our guide was German and told us all sorts of interesting things about alligators, snakes, birds the everglades and even showed us a picture of the turtle that bit his brother's nose clean through (he also had a picture of his brother with his bloody nose). 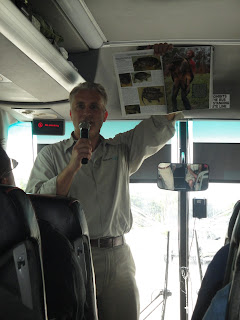 Our airboat ride was at the Sawgrass Recreation Park. 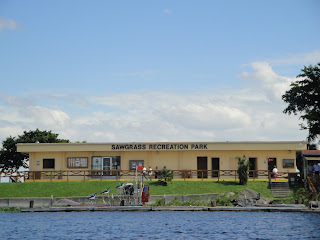 We were looking forward to this. 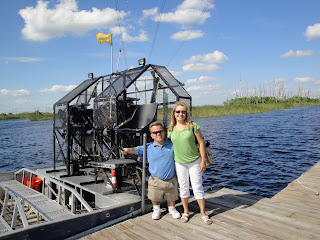 Here's us driving straight out over the water through the sawgrass. I guess the boats can drive on 1 to 2 inches of water (though they can't slow down when it's that shallow)!
I know there isn't much to see in the pictures....there wasn't much to see there. We drove for 5 to 10 minutes out straight and then stopped...why did we stop... 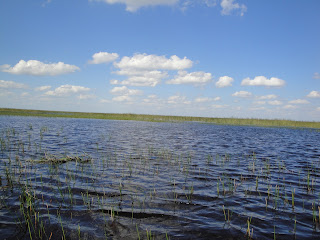 The boat driver moved a little and said. There he is...
And we saw this alligator trying to escape into the sawgrass. 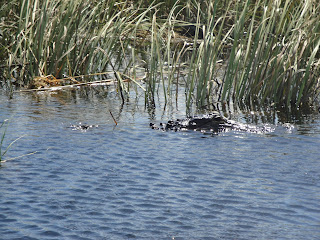 The boat driver didn't say anything about him other than the fact that they are nocturnal and we're lucky to have seen this one. When the passengers asked him questions about the alligators he didn't know much. He did let us know that for $40.00 each we could come back at night and go on a boat tour and see a lot of alligators...we sat there for a couple of minutes and he turned around and started back. 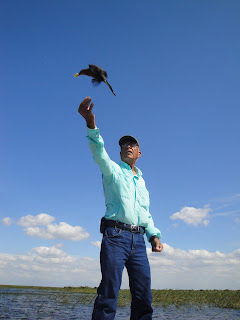 Right before we got back he stopped the boat again and pulled some cheese-its out of his pocket and fed some birds that were used to eating from his hand.  Then he drove the 3 minutes back and we were done.
Not to impressive.
The better part of the experience was there little zoo area that had native animals on display. Here they fed some really big alligators. 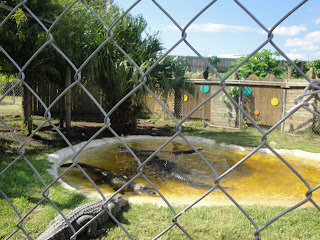 And this guy pulled out some "baby" ones to show us. 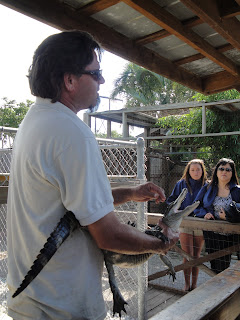 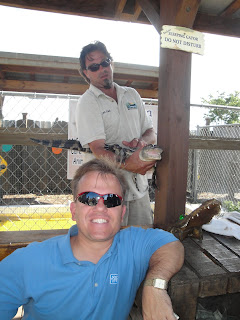 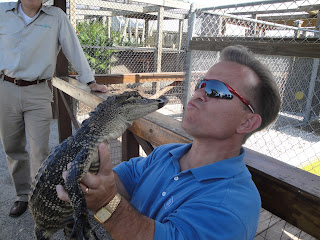 It's he cute. After he showed how brave he was everyone else started getting in on the action. 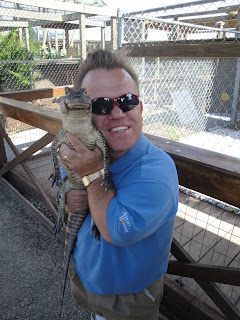 Including me. I passed him on when he started wiggling all around... 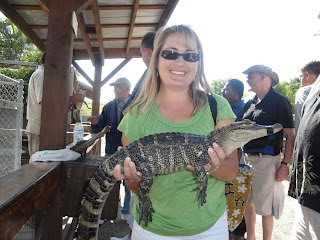 Further on we found some of those destructive vultures they were talking about earlier. 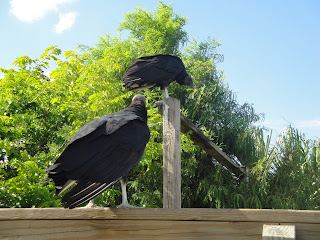 Here is a Florida Panther (like our mountain lions). They are almost extinct in the wild so it was cool to check him out up close. 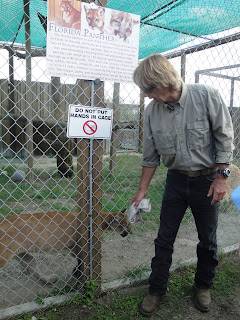 I cracked up at this bird feeder that was full of what looked like someone's pets. There were parakeets in a cage for the zoo and then right next to it are these ones that are in the wild. Funny. 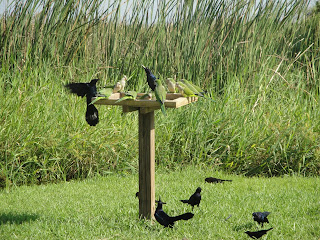 That night we were on our own for dinner so we decided to ask Doug and Jaimie if they wanted to join us and get some use out of our rental car. We drove up the coast admiring the super huge homes (that looked like they would be right in the path of hurricanes on the coast) to get to downtown Palm Beach. 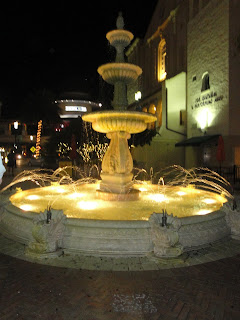 We ate at this amazing restaurant...Il Bellagio...where Jeff liked using his Italian. 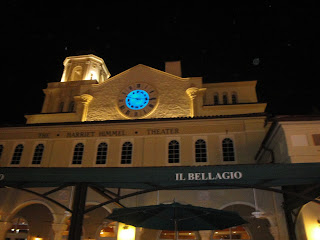 Dinner was yummy and we had fun sharing our entree's all around. Of course we kept enough room for ice cream on the way out. (It was a all homemade ice cream shop and it was yummy too) 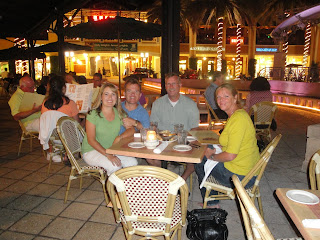 Posted by Christine at 1:23 PM