This week was a busy one. One of the fun highlights was a girls night out at Claim Jumper. Before I went I tried to do a little research so I wouldn't unwittingly eat enough calories for a week with what I ordered. I found out that the bow-tie pasta dish was almost 4,000 calories. Whoah...steered clear from that one. I got the Salmon instead. Yum!

When I got home I came home to find a sad family. I guess when they went to put Churro back in his cage after running around he looked like this. 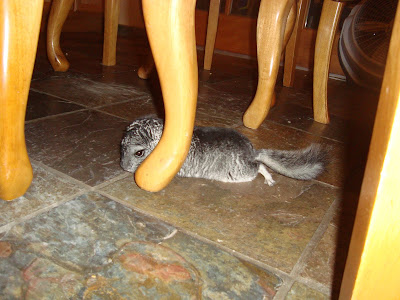 He was floppy and unresponsive and wouldn't eat or drink anything or stand up. Taylor thought to call Melanie Mitchell who is a vet in our ward. She said that he could be having a hypoglycemic reaction. She told him to try maple syrup. I guess he ended up lapping some up and after a little time for it to digest he was up and running around as good as new.

I asked her later what could've happened if they hadn't interviened. She said he could've died. Scary!

On Friday morning Jacob got a character award for citizenship. Yeah Jacob! (You can tell how excited he is.) 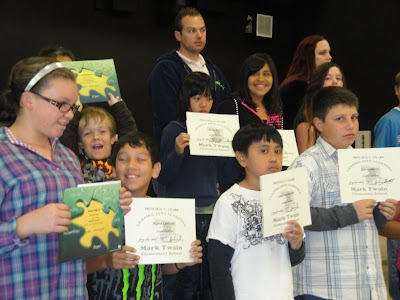 Friday night Jeff had his teachers quorum over to rent their stuff for their snowboarding trip the next day and to put together their special recipe for the chili cookoff. (I was in charge of heating it and getting it there the next day.) 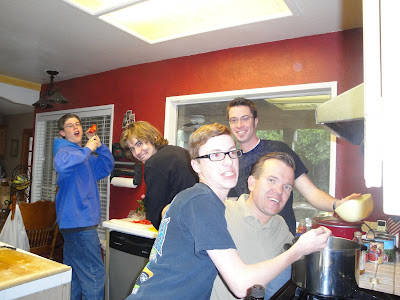 While they were out and about I took Jacob and Ashley to the cub scout Blue and Gold dinner so Jacob could help greet the new boy scouts as they came across the bridge. 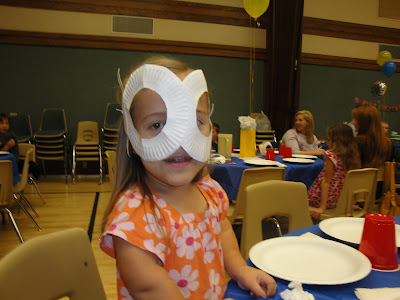 The next morning the boys got up bright and early for their snowboarding trip!

Saturday was Taylor's first trip snowboarding. At the end of the day Jeff said he did really good for his first time.

Taylor said his only complaint was that nobody showed him how to stop, and the snow stinging his face as he was coming down the mountain wasn't too fun. He's ready to go back on a better day and try it again though. 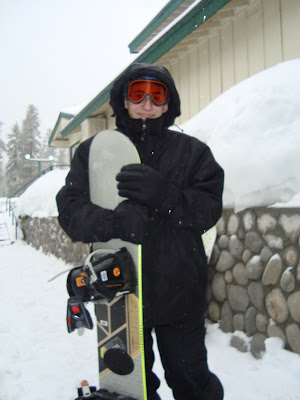 The teacher's quorum. Jeff was so proud of them. They all made it up to snowboard and had good attitudes about it. 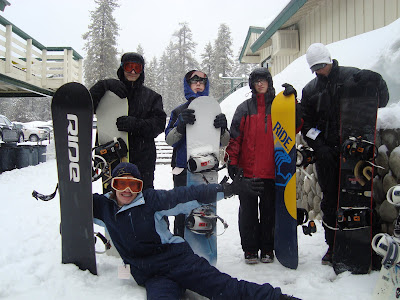 The road conditions getting up to the mountain were a little hairy scary. While it was raining all day down in Riverside it was snowing all day up in the mountains. It made for some pretty crazy skiing conditions and some even worse driving conditions. I now own my very own set of chains for my van. 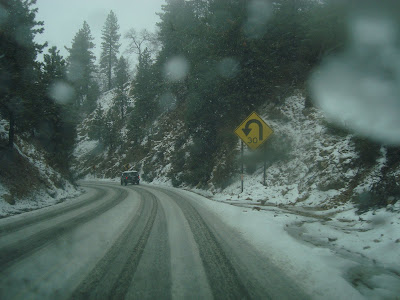 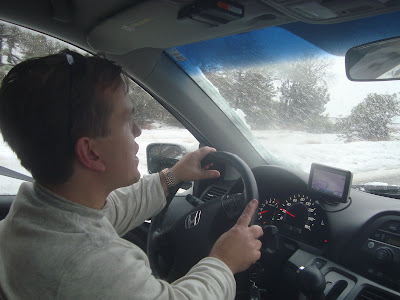 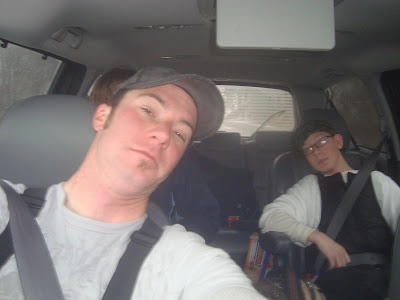 While the boys were snowboarding it was Stake Achievement Day activity for Ashley. Sadly it was a daddy daughter day, so nice Uncle Steve filled in for Dad. When it came down to the daddy/daughter pictures Ashley opted to have one taken with Jolene instead.

She was also very happy to have Jolene and Jenae able to come over to play at our house all afternoon. 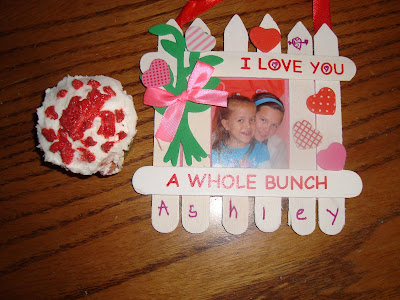 Ashley was in a good mood despite the fact that she was suffering from a cold all weekend. 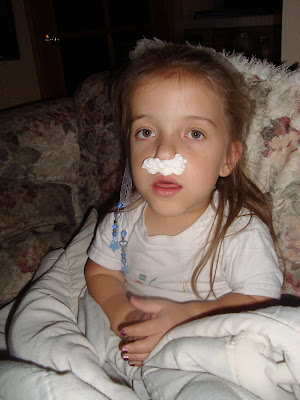 On Saturday while everyone else was out and it was raining and cold. Jacob and I worked on his GATE project for the trimester. Behold Jacob's version of the great wall of China. 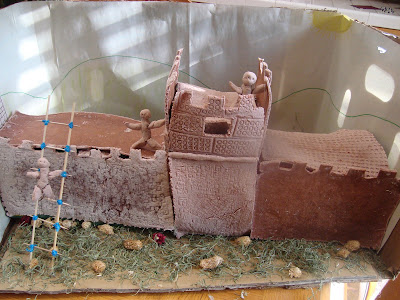 How did we make it you might ask?? By getting inspiration from Cake Boss :) 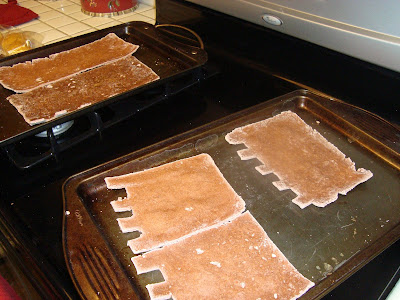 After the cousins were picked up that afternoon it was time to load up the teacher's quorum chili and get down to the church for the Chili Cookoff.

I got to hang out there with the kids because as soon as Jeff got down off the mountain he went home to go to bed. (He slept until 10:00 the next day and wasn't feeling good after a long week.)

Here is Jacob and Ashley eating their dessert. In the foreground is Jacob's bowl of chili just as he requested it, with cheese and sour cream on top. There is exacally one bite out of it. 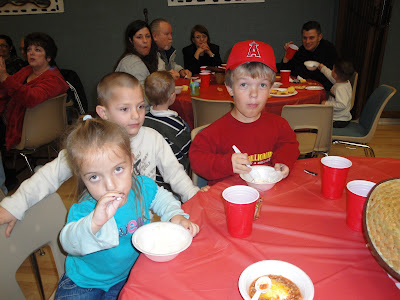 The teachers didn't win anything for their chili but I was happy and suprised to win second prize for my cornbread muffins. 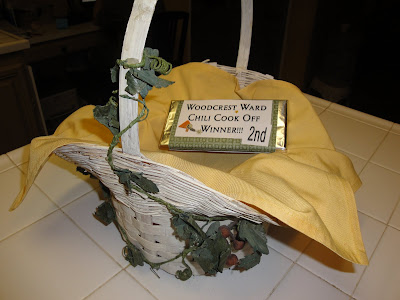 This whole week I've been getting ready for Ashley's baptism and the after party. I've finally fixed the chairs that have needed fixing, replanted the pots in the front yard and put together the underbed drawer thats been sitting under Ashley's bed for like a year. 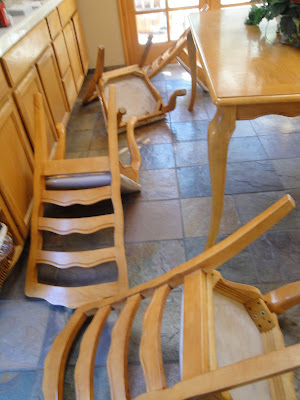 I even had a reason to pull out my stamps and embossing stuff to make invitations for Ashley's baptism. 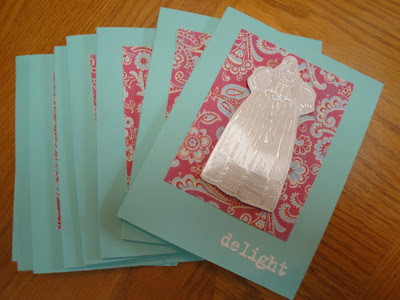 And the last highlight of the week. I was having a rough couple of days (maybe too much craziness) and Jeff did his best to brighten it by bringing me these... 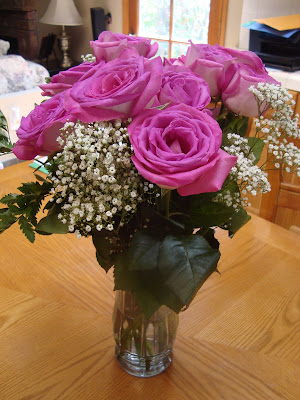 You guys always look like you are having fun! I am glad the pet made it! I am so excited for Ashley!!! You invites look perfect and I am sure the day will be too.

Congratulations on the baptism! The cards you made are beautiful. I hope to see you during Women's Conference. I don't think I will be attending but maybe I'll come down and visit or something one of the evenings you are there.