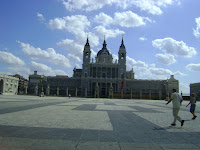 OK so we came into Madrid with no baggage. Not having this predicament before we were not smart enough to bring anything extra. So we had nothing but the magazines that we brought to read on the airplane and our wallets and passports (though I was very glad I had thrown my camera in my purse) So we request an emergency kit from the hotel for toiletries. They gave us this... 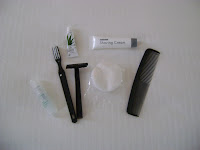 Obviously it's geared for the typical man whose on a business trip. It included toothpaste that was aloe Vera flavored and deodorant that was like a cologne spray that smelled like mouthwash. Nice.

Not wanting to smell European in less than 24 hours we decided to go to the store and try and get a couple of things on our own. I figured we needed a few things to look somewhat human. We went and bought the cheapest deodorant, brush, hairspray, eyeshadow, powder and mascara we could find. We got the bill and it was $65.00. Such a deal. 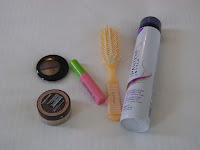 The upside was we found a great little restaurant to have pizza in on the way back to our hotel. We looked at the menu and then asked the waitress's recommendation. She recommended the pizza that was topped with apples. Somehow I didn't imagine that tasting too good with tomato sauce so we decided to go with our own instincts. I noticed that their version of tropical pizza had the ham and the pineapple but it included bananas as well. We went with ham only and barbecue which was actually really good.

Well Monday morning we woke up with nothing to wear so dressing was an uncomplicated thing. We went down to ask someone about breakfast and we were offered a seat at the hotels breakfast buffet. We decided to go for it and didn’t even ask the price. I guess breakfast in Europe is not usually a big thing but they looked like everything was overboard for the breakfast buffet. They had everything from salmon, to fruit, to every kind of bread you could imagine as well as cereal, eggs, bacon, cheese sliced and cold cuts and more. I got to try their hot chocolate which was much thicker than ours and somewhat bitter. When I first started drinking it I wanted to throw some milk in my cup but I stuck with it and actually got used to it and thought it was pretty good. We weren’t overly surprised when we got the bill and realized we just spent $110.00 dollars on breakfast. Such a deal! 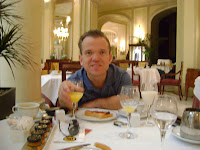 After breakfast we went with a couple of other New York Life people and bought a two day bus ticket for the double decker bus. We got to see all of the older parts of Madrid while listening to a narration over headphones. Jeff and I got off in the middle of the city and walked around and explored. We checked out the Plaza Mayor and some of the little souvenir shops that are all over looking for something for the kids. We found out that a lot of the shops offer the same things over and over again without much variety. We haven’t found anything too exciting yet. We felt sorry for the beggars in the street. There was one guy sitting on the ground with no legs and another guy with no arms who holds a cup of coins in his mouth shaking it up and down. Jeff threw them a couple of coins feeling sorry for them. It wasn’t until a couple hours later that he realized the couple of coins he threw him was worth $3.00, he made sure to check what coins he was throwing in the future.

The buildings were all beautiful! Our view from the bus... 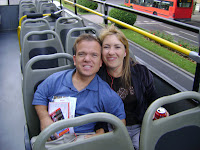 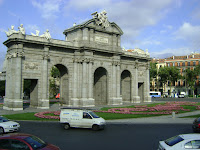 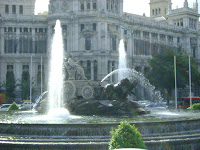 On the way back to the hotel we saw a cathedral that was open so we thought we’d go in for a visit. In Italy all the churches were open so people could visit any time they wanted. We walked into the end of a mass. We sat in the back to check it out and as soon as mass was done we looked around a little and then left. Sure enough there was a guy at the door ready to lock it up. We found out later the cathedrals aren't really open to the public, you have to pay to get in. Well I guess we got a free peek.


After we came back to the hotel to each lunch and register (and check if our bags were here yet) we found out that the tour we were supposed to take had been changed. We had signed up to go to the Palace Real, which was the royal palace but it was going to be closed for the next couple of days for visiting dignitaries. The only day we could visit it would be today. We decided to use our bus tickets and ride over for a quick visit. 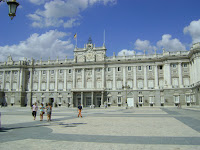 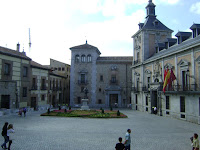 I was excited because I have never visited a palace before. We paid to go in and started our walking tour. I found out in the first room that we weren’t allowed to take pictures, even without flash. We did snap a couple however before we got caught. The armory was fascinating and housed ancient suits of armor, and jousting outfits, swords, staffs and guns from hundreds and hundreds of years ago. When we first walked in the palace we saw the guard towers and courtyard and could imagine the protection that the kings used to get. 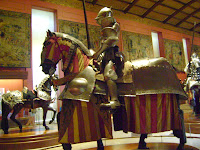 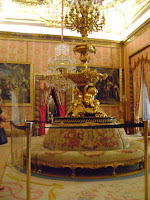 Inside we walked up a set of the royal stairs to the throne room, the dining hall, bedrooms and all sorts of rooms to entertain guests. They were all decorated in different styles which I could appreciate after taking Art History in high school and college. It was fascinating to hear of all the work that went into the designing of one room. The Rococo style seemed to be the most ornate and each ceiling was filled with frescos of scenes from mythology and religious themes with royalty thrown in there in strategic ways. I was surprised at how tied Spain was to ancient Rome and even the mythological origins of Spain were somehow tied to Hercules (of course with cherubs and angels thrown in for good measure). We couldn’t see the chapel that was in the palace because it was being renovated but this is the cathedral that lied directly across from the palace. Obviously church was a big part of their lives. 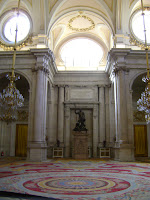 In one room there were no less than 3 very ornate clocks sitting on 3 different tables. I guess clocks were all the rage at the time, so of course you need more than one on display. One room that stood out was a room that was completely paneled in porcelain which was very popular at the time. In one of the more recent rooms they had made a billiard room and had covered over everything with wood paneling, including the fresco painted ceiling. In the next room a bomb blast had damaged the room and had destroyed the ceiling that covered the fresco and they chose to leave it exposed for view. The pharmacy was also very fun to see. I guess every palace had one and they said the king never went anywhere without his pharmacist and a medicine cabinet to go with him. I guess it makes sense that you wouldn’t want the King or his family to be have some disease take him out. It was fascinating to see all the glass and porcelain jars of extracts of everything that you could imagine lining the walls of this old pharmacy, some of them still containing liquids.

We got back to the hotel hopefull that our luggage arrived. The airline found our luggage in the morning and promised to have it delivered to the hotel, but it still wasn't there. Every couple hours they promised it would be there. That night we went to the opening dinner/social in our traveling clothes as everyone was in shirt and tie and dresses and heals. People were nice and we laughed and joked but inside we both felt uncomfortable. We slipped out when we saw the CEO of the company. Jeff didn't want to present himself not dressed appropriately and I didn't blame him.
At 11:30 we tried the front desk again, still no luggage. Jeff mentioned his frustration at the airlines promises with no results finally the concierge guy told us "They lie." Nice.
Posted by Christine at 11:53 AM

WOW! Thanks for sharing your photos it looks so pretty there. I love the garden photo. And I am glad you did get your luggage back:)