So we ended up with an unexpected day at sea because of the Coup in Turkey.

We already had to change ports because of unrest in Turkey and now that they were having a coup they cancelled our stop. The airports were all closed too and there was some question if it would disrupt Scott getting home since his flight went through one of the closed airports but by the time he was coming home it was all OK.

So we just tried to enjoy the ship this day by hanging out at the pool and trying the waterslides and some of the other things that we hadn't had time to explore. 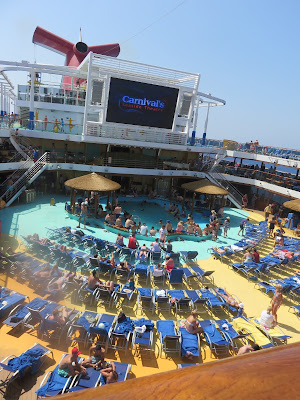 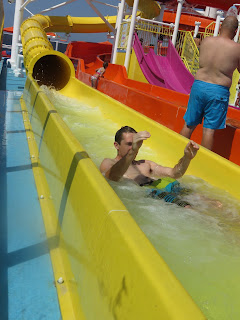 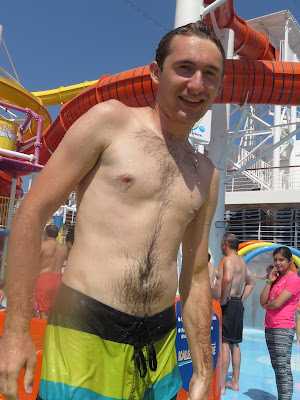 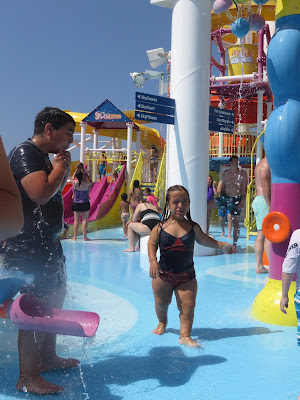 We watched a juggling show and enjoyed a nice dinner that night. 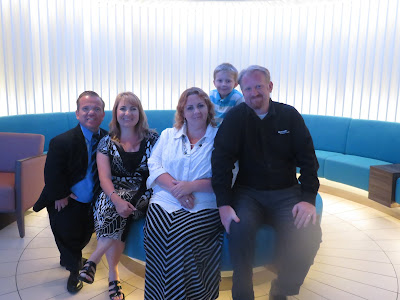 The next day we debarked in Crete, Greece.

We ended up hiring a driver with a nice car and inflated ego. Ha ha he was very proud of his island and wanted us to enjoy our day on it!

I have to say the climate reminded me of ours at home. Not much green and brown, dry hills and a heat like ours. Unlike Riverside I noticed that the buildings were run down and full of graffiti. I know there economy had seen better days and I felt like we were observing the after effects of it. 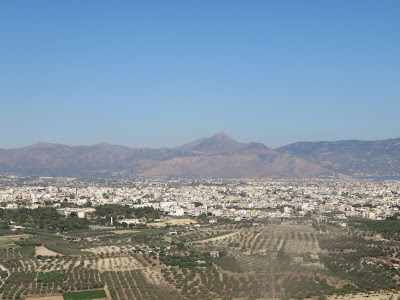 One of our first stops was the Palace of  Knossos.

The ruins were pretty cool and I couldn't believe that the paint was still vivid on part of it! 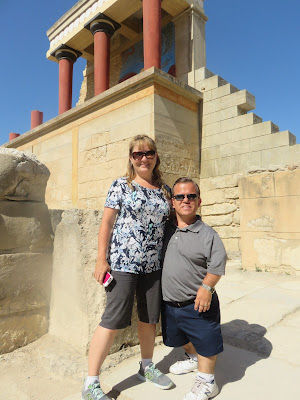 There were a lot of people there with us. 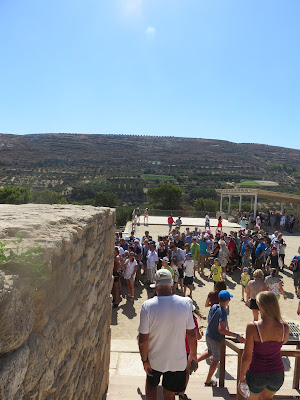 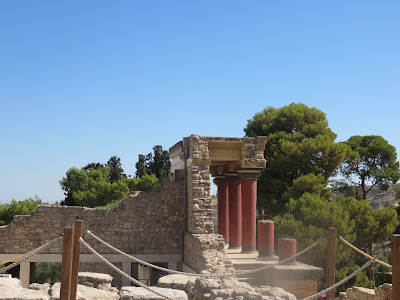 Some of the inner portions. 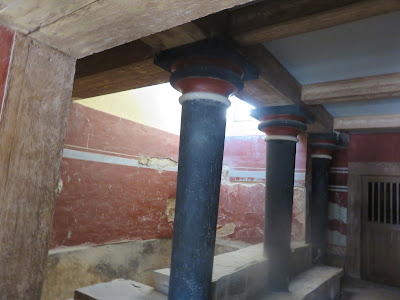 The line to get to see the inside of the palace... 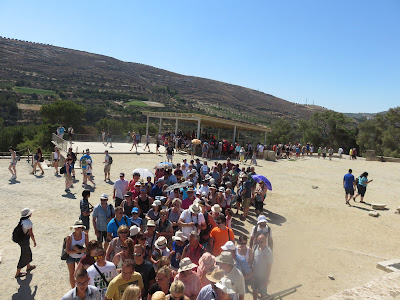 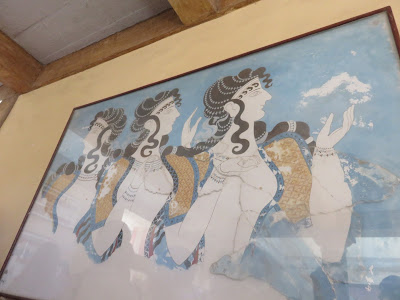 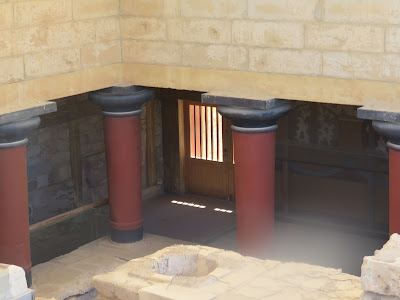 After the palace we stopped at another church. 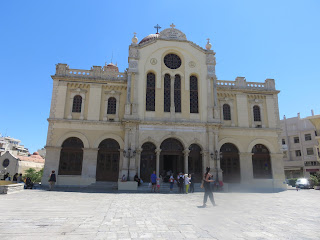 The decorations and paintings on the inside were a little different than we had seen since it was a Greek Orthodox church instead of a Roman Catholic church. 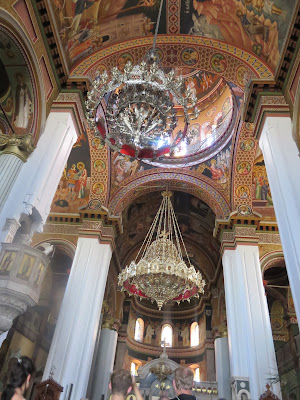 Christ looked pretty stern to me in this painting but the painting was impressive. 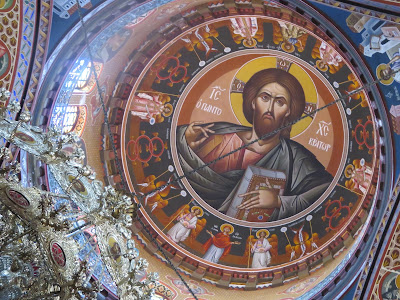 Our next stop was the archaeological museum.

I loved it and thought it was very interesting but the rest of the family was more excited to get to the beach instead. 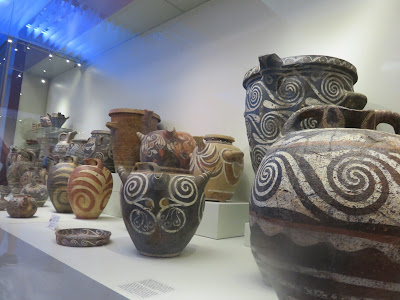 This bull motif was everywhere on the island. 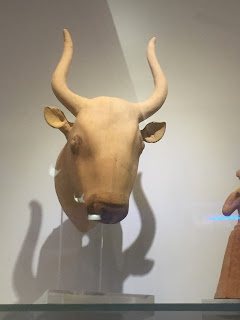 Even the stance of the people looked like they were mimicking bull horns. 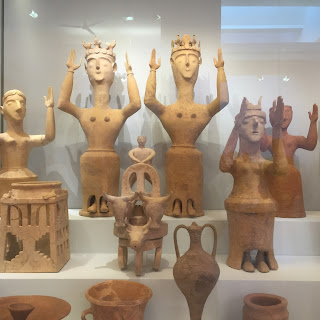 They had some giant vases there. 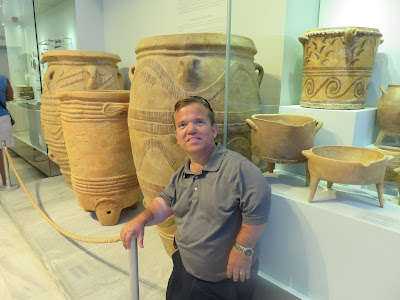 After the museum the driver wanted us to make a detour. We were taken to his father's house close to the water where he likes to hang out most days. There was a garden in the front of the house and he invited us to sit on the porch and eat cucumbers and tomatoes from the garden. They would put a little olive oil and salt on them.

I liked the cucumbers but I'm not a fan of tomatoes, especially by themselves. We tried to politely eat some but I felt bad that the dad kept picking more and more from his garden and offering them to us.

He also wanted the adults to try some of their special alcoholic drink. We politely declined and tried to explain our religious beliefs. I don't know if he completely understood but he didn't seem to take offence. We were flattered that he was so hospitable to us. 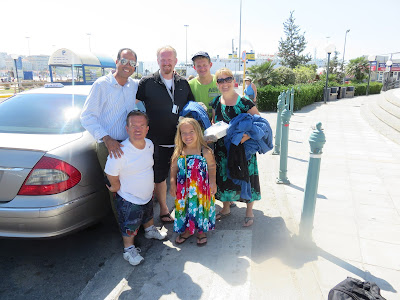 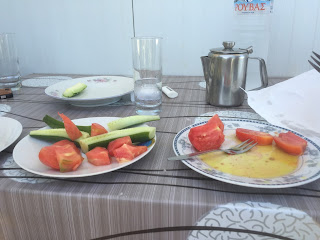 We finally ended up at the beach. We got some great food right next to the water. Great food! 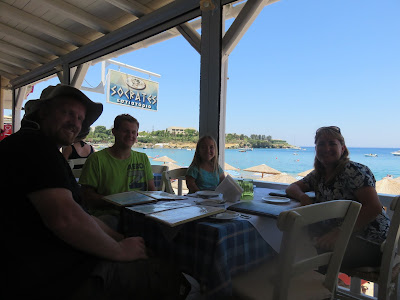 We were all happy to finally get in the water. 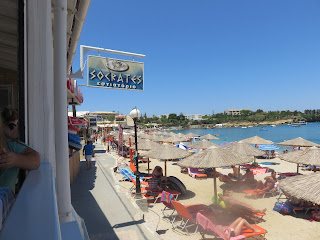 At the end of the day Jeff told me me " More beach, less archaeology tomorrow" Ha ha. 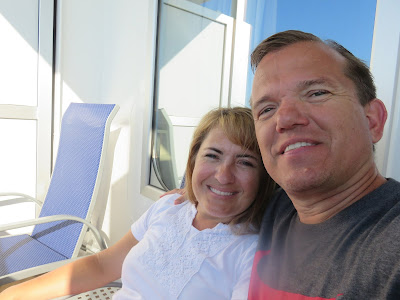