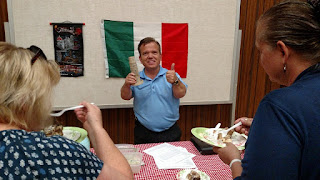 Some snapshots of summer so far...

Jeff had an opportunity to speak at a Relief Society night about Italy.

He was supposed to talk about the culture and have something to taste. As part of his taste of Italy we decided to tackle a tiramisu recipe using chocolate instead of coffee or liquor.

I was optimistic at first but realized I was working with ingredients and doing things I had never done before.  I did a practice one for mutual and realized my marscopone cheese was too cold to spread, my chocolate custard hardened too quick while making it and wasn't smooth like it was supposed to be and the ladyfingers soaked up the hot chocolate they were being dipped in and became a mushy mess.

I served it at mutual (which I am embarrassed about now) and when I got home Jeff was home and he said "What is this? This doesn't look anything like Terimasu, you can't even see any layers"
(That was because it was mush)

Eventually we realized that it was because the ladyfingers I bought at Alberson's, which were the only ones I've ever seen before, were like spongecake and the ones you are supposed to use from Italy are a hard biscuit.  Who knew.

Once we got the right ladyfingers, and we tried again the second version turned out much better! We redeemed ourselves and everyone liked it and Jeff even said he would make it again. :) Now that's its summer we've been able to enjoy the pool more and to enjoy it with friends. Ashley's friend Abbie is moving back to Utah soon and we were able to have a girls day over at the house before she left.


I warned the boys that girls would be taking over the house for the day. 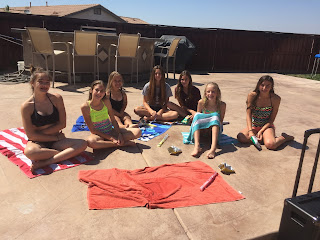 Ashley had been wanting to tie dye t-shirts so I bought all the stuff and we had a tie-dye activity, swimming, we all ate dinner and then went to see Finding Dory the first day it came out at the luxury theater with the nice seats.

It was like a 10 hour party by the time it was all said and done. After our movie I came home to rinse and wash all the t-shirts so they would be ready for the next day... 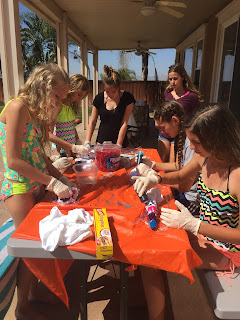 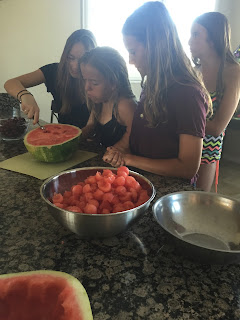 The next day was a swim party for both Abbie and Nathan since both of them are moving away this summer. 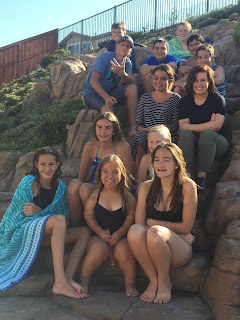 I was cracking up because it took awhile for the girls to get in the pool....and when they did they stayed right here on this side... 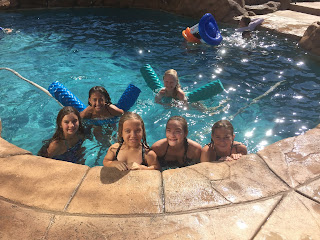 The boys were taking up the rest of the pool but the two groups didn't intermix at all. 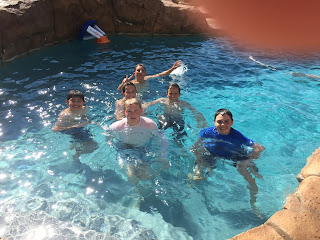 Girls on one side and boys on the other... 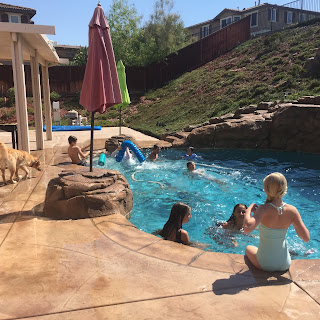 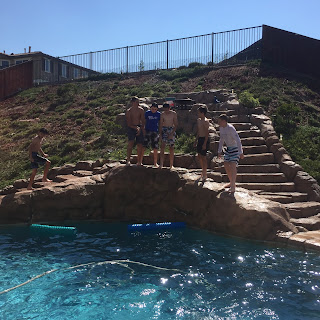 I realized that I had to tell the boys to not jump on each other, put each other in headlocks underwater and other such "suggestions" that I never have to worry about with the girls when they come over. 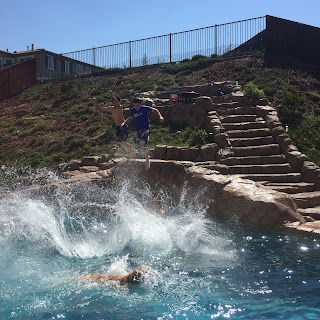 In the middle of the party Jacob had invited Elsa to come spend a couple of days and Ashley had Jenna spending the night. There was a group of people that were playing games inside for awhile. 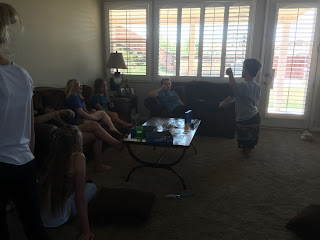 Then Kelzey stopped over since she was home for the weekend and we got to visit with her for a bit. I love that they have time for family and friends in the summer that is so hard to come by during the school year. 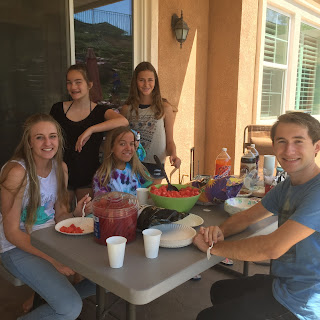 Once the party was over we got to spend time with Elsa and enjoy having her down. The next day we planned a shopping trip at the mall. Jacob declined our invitation, ha ha so just us girls shopped. The kids were going to a dance that night and Elsa was able to buy a dress, a Father's Day present for her dad and more. We ate pretzels (a tradition) and ended the trip with a visit to the puppy store.

Yes the puppy store is a dangerous place.

Ashley and Jeff have a deal or bet (whichever you want to call it) that if she can keep her room clean for a year she can get another dog. Jeff was so sure that she couldn't do it he agreed readily. Well she's been actually doing it...pretty much...it's not perfect but its a lot better than it was. Going to the puppy store hardened her resolve.

Now I'm being taught by her about every breed that is out there and peppered with questions about what kind of dog I want. Meanwhile I keep telling her just enjoy the one we have! Ha ha.

That night the kids had fun at the dance...and Elsa was able to wear her new outfit 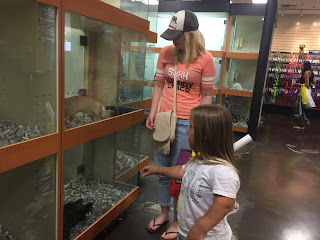 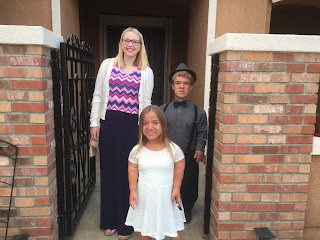 The kids were off to EFY the next Monday. Ready to go. Jacob's 5th year and Ashley's first.

Jacob's roommate was Shaun Thompson...and in honor of that he wore the t-shirt Shaun gave him during his campaign...Shaun and his mom thought his shout out to Shaun was funny. I guess he was the life of the party at EFY and had a great time. 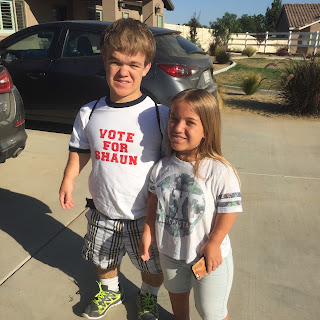 While the kids were gone I didn't do anything exciting. Actually it was lonely and boring for the first couple of days. One day I had to drive out to Los Angeles to UCLA to pick up Jacob's medical records. Long story short it was 2 hours at UCLA getting everything I needed and 6 hours of traffic nightmare getting there and back. Who knew that leaving at 2:00pm would still put me in rush hour coming home...an hour and a 1/2 drive turned into over 4. I am so grateful I don't commute to LA every day!!! 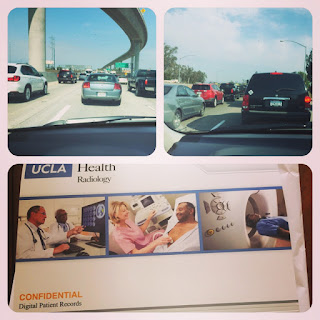 Posted by Christine at 8:18 AM

Sounds like a fun summer...except for the traffic part :)