Earlier this month I was able to go with Ashley's class to her field trip to Riley's farm. We haven't been here in a couple of years and I realized how much I missed it. Especially during the apple picking and pumpkin buying season. You can imagine yourself stepping back in time when you visit and it reminds me of when we went back to Virginia to visit my parents and roamed through historical sights.

At the beginning of the day you could put in an order for a pie at the window and it would be ready by the time we were leaving. I have never done it before but I decided to order one...I was glad I did because the rest of the time we could smell pies baking and it would be hard not to have one to bring home after smelling it all day :) 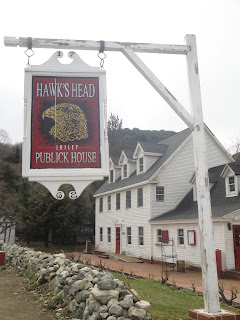 From the time the students got off the bus there were period costumed characters lining them up and giving orders. Every class was put into a group and led by one of their own carrying a flag. 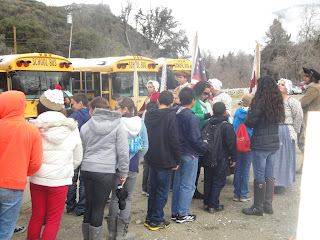 I noticed posters up when we got there saying that Riley's farm had written and produced a movie recently shown on PBS recently named "Courage". You could buy the DVD's when you were there. This "house" shown on the front cover is actually their bathrooms (hee hee) 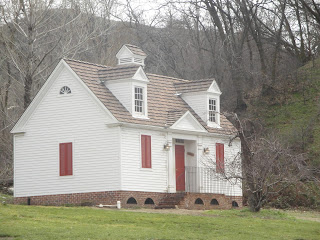 I was impressed with the costumes, dusty, somewhat homemade looking but detailed. 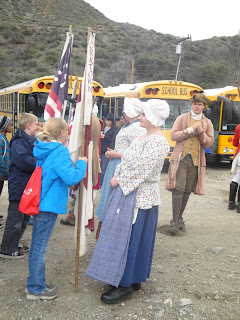 The students all had to line up and were given orders. 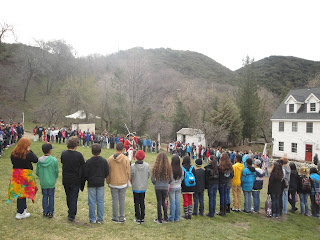 This soldier's threats of corporal punishment in his English accent seemed to only elicit giggles from the crowd :) 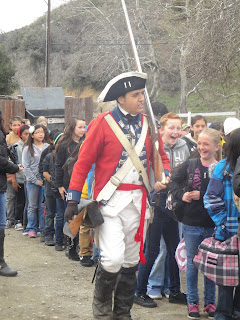 Before the rotations started the mood sobered up when there was a mock shooting of a colonist by the redcoats. The students were just starting to get a sense of what life would've been like around the time of the revolutionary war. 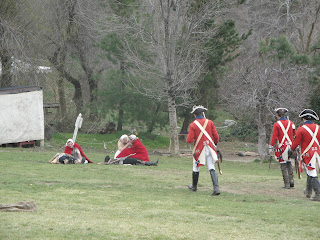 This man taught everyone about all the accessories a soldier would need. 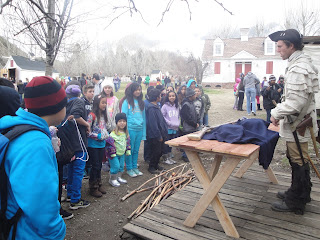 Of course a gun, bayonet, gun powder and things to eat and drink with. The one that surprised me was the paraphernalia and mold to make his own musket-balls out of lead. I guess they had to make their own ammunition too. 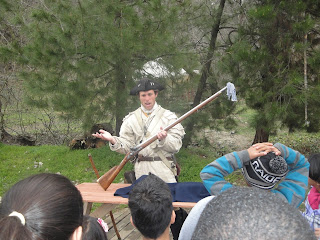 In here they learned about the stamp tax and all the things that had to have the special stamp...hymn books, legal documents and such... 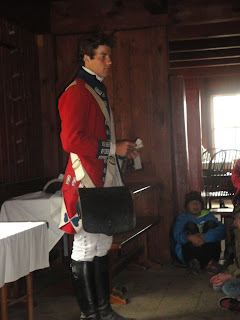 The class found it funny when two of the volunteers had to pretend that they were getting married and needed a stamp for their marriage license. 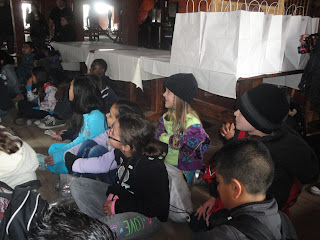 In this station they learned how much work a typical household had to do just to eat and also the unfairness of laws that said soldiers had to be fed and housed in not only times of war but times of peace. Poorer households could barely feed themselves let alone all the soldiers that would want to be fed. 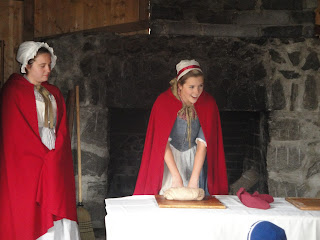 This is a wheat grinder, wheat had to be ground at least 10 times to make flour! 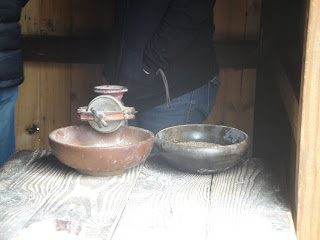 To churn your milk into butter?

They also wrote with a quill and ink and realized how hard that was.

All in all I think it would take a long time to do what we do in minutes now.

One of the teachers commented that at first she was thinking "how nice to live in a simpler time" then to see the realities you realize it wouldn't have been so great. 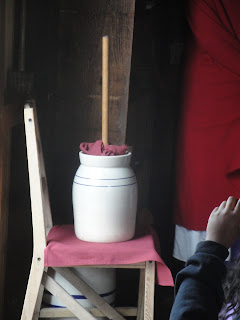 In here they learned the unfairness of the courts at the time. Basically guilty until proven innocent. The person presiding was also judge and prosecutor and received a percentage from the fines he charged people with. If they couldn't pay the fines, he could put them in jail and sell their property. You could imagine how hard it would be to get yourself out of trouble without being rich enough to bribe people in that sort of court situation. 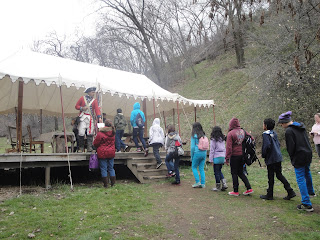 Here they learned about carding wool and spinning it.
(Another long and tedious process I'm glad I don't have to worry about) 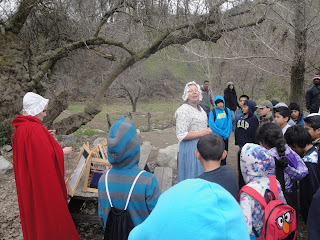 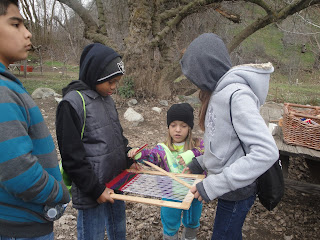 Here they are playing games...none electronic games with sticks and hoops and such. 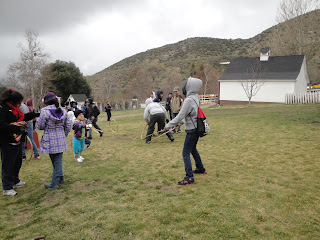 Throughout the day it was getting colder and colder and was raining off and on. The students didn't seem to mind but us parents were just observing and we got chilly.

After lunch of soldiers rations (and the ones they brought as well) they lined up for the final battle. They had been learning about the reasons the colonists were willing to fight for their freedom and now this was their chance to reenact a battle. 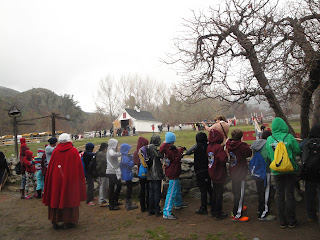 The calls to action were made and with their rifles (big sticks) the students all loaded their gunpowder, waited to see the whites of their enemies eyes and fired. 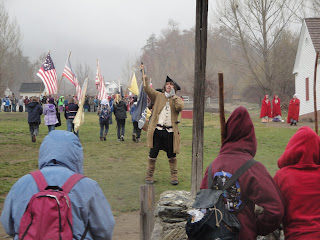 Since it was raining the ground was muddy.

One of the moms noted that this would make a nice Tide laundry detergent commercial.

Ashley was happy that she wasn't one of the ones that died. 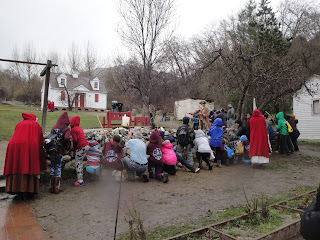 After the battle there was some final words and a story of a young man who was tragically shot in battle. As he was dying his plea was "Do not let freedom die with me"

I am hoping that the students got a sense that freedom isn't free.

It was a great field trip and even greater to get back in a warm car and get out of the rain. 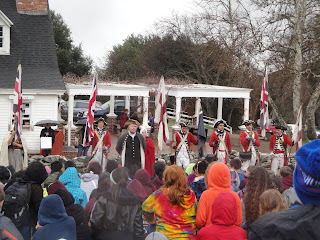 The next day I went to Ashley's school and I did an art lesson.

It brought back remembrances of my Art History days. (I was an Art History minor in college)

What fascinates me about art is that it is history at the same time. You can tell about what is going on in society, points of view at the time and how the artist manipulates subject matter to show a version of the world that they want you to see.

In earlier colonial history the view of family roles was more rigid. This family looks very stoic with the father aloof and above his family members. He stands at the head. Children are attended to by the women and look very subdued as well. A little later the view of family changes. Women are looked to more as partners, children are seen no longer as miniature adults but children, to be loved and played with. Men are more attentive to them and this example shows a much more relaxed family.

The art reflects the prevailing views of the times. 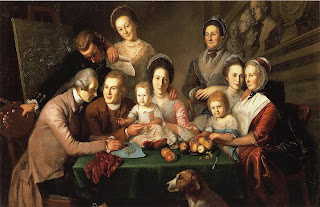 This person who was commissioned to paint George Washington had the task to present him in a favorable light, but how. Paint him as a general in charge of an army, or as the president of a small, struggling nation?

He painted him in the grand style typical of royalty with solid columns and sweeping drapery tying him (as other royalty does) to ancient societies in Greece and Rome. In the table and chair are symbols of our nation and the books under the table bear titles alluding to revolution and our new government. It was interesting to learn the artist only had one sitting with George Washington and worked hard to replicate his face but his body was modeled by someone else. 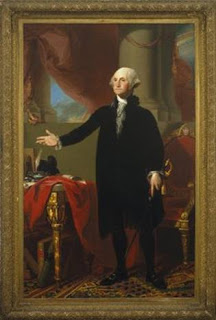 The task Ashley's class had was to draw a picture of themselves as if they were in this colonial time period. Everyone ended up making a good effort, even if a couple of them started out drawing themselves as a Mexican with a sombrero on his head and Elvis.