In the last couple of weeks I've inherited a couple of big notebooks to add some more on my plate. I've agreed to co-chair being 6th grade science camp fundraising coordinator for next year. For the next year a friend and I will be overseeing all kinds of fundraisers to raise thousands of dollars for next year's science camp. This is in addition to being room mom this year, volunteering with 100 mile club and book fair, possibly still doing red ribbon week this next year in addition to all of my church assignments. We've already started taking over doing the Friday snack sales, we have 3 events to sell things at this year and that's before Ashley is even in 6th grade! Most days I just try and take one thing at a time and one assignment at a time.

So for an update on the kids. Taylor is doing pretty good in school this year. He got on the honor roll this semester and we are so proud of him! He is taking his SAT's this Saturday so we're all a little nervous for him and hope he'll do well. He has been enjoying going to his rock climbing gym still and has started taking a Lead class to learn some more advanced rock climbing techniques. He's looking forward to taking his driving test next month. I'm looking forward to him getting his license as well, I'll be ready to send him on errands ;) 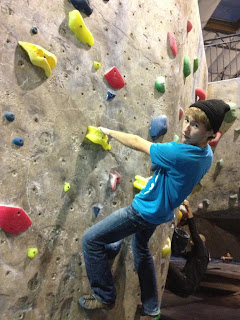 Jacob is figuring out high school and how to stay on top of his work load, he's realizing it's not very easy. As for his personal life, it's pretty much a mystery to me. He's pretty closed lipped but I'll hear a few things here and there. He'll talk to Taylor and Ashley a bit more and he seems to come alive when he's with his friends. I get the quiet, grumpy version unless he needs something or is hungry.  He is working on scouts and is a few merit badges and a project away from Eagle! One thing Jacob is very good at is the piano. He is awesome! He will sit at the piano and play for the pure enjoyment (or to put off doing homework). He'll print out a song from the internet and go to town with it. The newest one he learned was  "Just the way you are". I'm glad he's keeping with the piano, it's nice to hear him play beautiful music.

Ashley is more of our social butterfly and loves to have friends over on Saturdays when it's pretty boring around here with Jeff and I getting errands and stuff done. She tells us she wishes she had a sister, since we don't have one we borrow one for a day :)  This day Soli came over after her soccer game and I took the girls and the dog to Sycamore Canyon. They both loved it. Ashley's new favorite thing is her Kindle Fire. It's like her own mini-Ipad that she doesn't have share, ha ha. She also likes going on the trampoline and will try and get the boys to go out with her even if its cold. Ashley is doing pretty well in school and is doing really well in math. 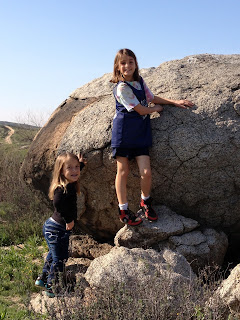 A couple of weeks ago Jeff and Ashley went to the Father-Daughter Hoe-Down at the church. They looked great in their outfits and matching bandannas.

Jeff even brought Ashley out to dinner before they went which made her happy. 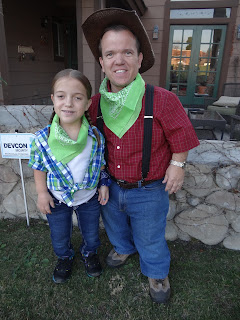 Once they got there not only did she get to spend some quality time with her dad... 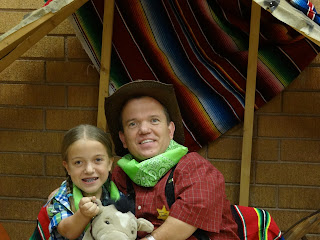 She got to hang out with her church friends... 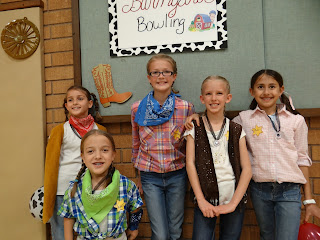 and be a little silly. 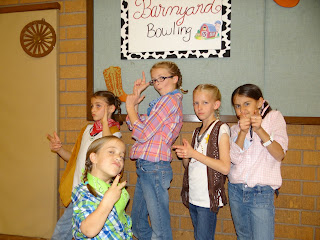 They did games, and dances ... 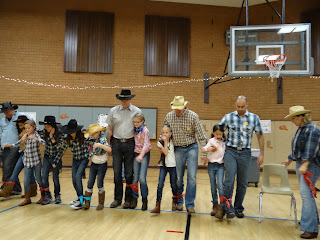 and had dessert together. 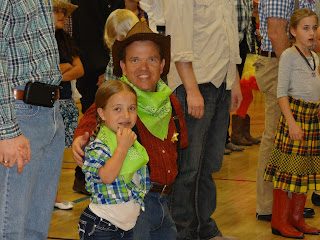 She had a fun night!

While they were gone I did some mother/son hang out time at the mall with the boys. We lured Jacob there with promises of pretzels and Taylor got to shop for himself to pick up a new hat and shirt. 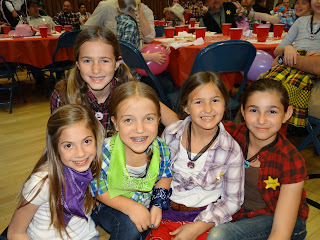 This last Saturday a lot of the day was spent with Jeff and figuring out his car situation. Jeff is ready to sell his Lexus and buy a new one. So I dropped him off early to get his car detailed and then after grocery shopping it was off to the car dealership to go with him to test drive new Lexus's.  He tested 3 cars to make sure he knew what he wanted. That's 3 times of hanging out with the car salesman chit-chatting while Jeff took off and put on his pedal extensions.

He was considering the hybrid that gets 40 miles to the gallon and takes regular unleaded fuel (rather than the expensive stuff). I liked it, it was a smooth ride and I could imagine Ashley would never complain in the back seat about motion sickness. You can't even feel the gears shift because there isn't any, you also don't feel the punch when you step on the gas. I would be fine with that and I loved the money that you would save on gas.

Then he drove the GS which is what he really wanted. It's more sporty and you definitely feel the punch when you step on the gas. As my head is being pushed back on the headrest as he's trying it out I thought to myself "there is no way he's going to buy a hybrid, this is more his personality" I also know with a car like this Ashley will be doing some complaining from the back seat, ha ha.

After hours of dealership, and calling around and trying to get the best price for his old car and researching and talking about it all day...nothing happened. It's midweek and he hasn't had the time to post his car on-line yet to sell it, and he hasn't given the go ahead for the new car. I'm staying out of it. I guess he'll figure it out when he's ready. 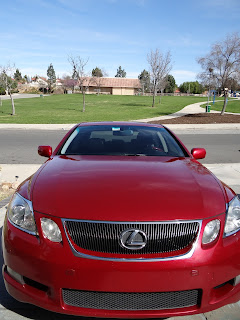 That night we were meeting up at King to watch the color-guard competition that my niece Liesl was part of. We were trying to get there in time to see King perform too but since Jeff and I were racing back from our "pick your Amazing Race teams" dinner we missed it by 2 or 3 minutes. They close the doors between performances and even had the windows taped up and we got there as King was performing and we couldn't go in. Taylor was hoping to cheer on his friend Kelsey but he at least was able to wave to her after she was done. 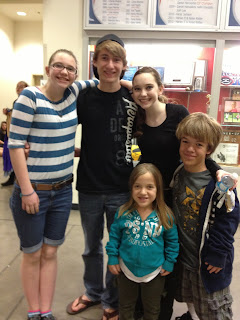 Liesl and her team did great! They actually won 2nd place in her division and the next day when she went to church with us she was able to meet Kelsey and become friends with her. She said they talked about color guard all during Young Women's. 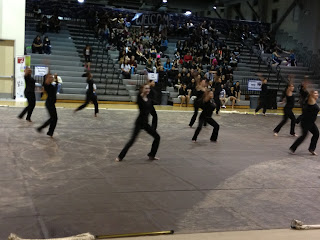 After she was done with her competition that night we went with them to Taco Bell and then came back to the house to hang out and relax. (Washing her dirty feet after all her dancing) I watched a movie with the kids while Dale and Liesl went back for their awards. It ended up being a late night for everyone but we all woke up for 9:00 church in the morning. 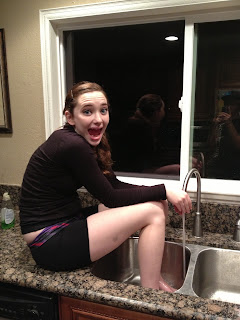 After church I found these two fighting over the couch to take nap. Neither one of them won and they both ended up falling asleep on the couch. Liesl is way under the blanket and Taylor is falling off but they both got a nap in. 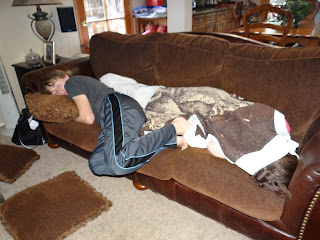 These cousins found a game to keep them busy.

We actually had a nice visit with them. It was nice to catch up with Dale and enjoy the girls. Normally with the big family events its hard to have much one-on-one time to hang out with family members. 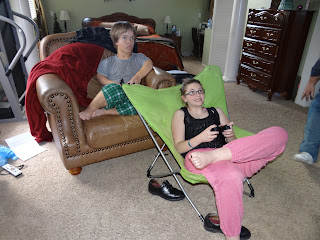 As soon as they left to go home it was time for Jeff and I to start cooking to get ready to have the missionaries over. We enjoying talking to the one elder from Mongolia who is getting ready to go home soon. We asked him about his family, his future plans and about life in Mongolia. It was fascinating. He lives in the city but he has family that lives in the country in the traditional round tents. He says they have electricity provided by windmills and live a better life in the country than most people live in the city because they are self sustaining and have more to eat. Interesting.

Holy Moly, woman you are soooo busy! You are the queen of the volunteers. I liked hearing little updates about each of your kids. Your descriptions of Jacob always make me laugh. He just seems like the ultimate, typical teenage boy :) Oh, and every year I think I want to do the "Amazing Race" teams the way you guys do it. One of these years, maybe I'll give in and be the hostess!