Playing catch up on the blog.... so rewind before our trip I went with a group of ladies up to Oak Glen to do some apple picking. I have a friend with a connection and we can pick a laundry basket full of apples for $10.00. Thats a great deal.

So we loaded up in the morning after kids were at school (Ashley was sad that she didn't get to go) and I got to pick lots of apples. There were plenty of moms that had their crew of younger kids "helping" them, I think I had an easier job. 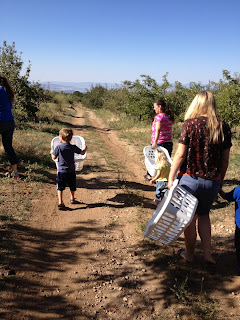 These apples were all organic...meaning none of them have been sprayed...

which means we had to look for worm holes and birds that had eaten them. 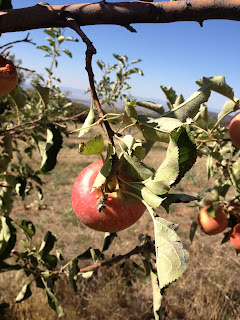 I was very happy with all our yummy apples... 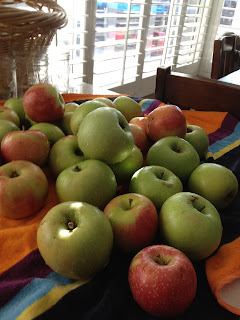 Even though I missed a few bird pecked ones.

My dilemma was that we were leaving for the Bahamas and I didn't have time to process them all before we left. So I cleaned out the fridge and filled it full of apples.

When I got back I decided I'd better do something with them. Some went to friends, and I donated 24 for the young women to make caramel apples and I canned the rest. 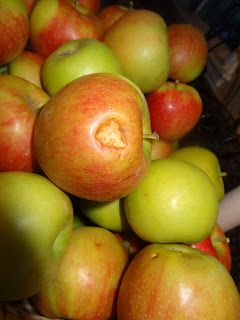 My new favorite toy is our apple slicer/peeler/corer. This is a must when you are canning apples! I picked it up at Bed Bath and Beyond and was so happy at how easy it was to get the apple ready for the jar. 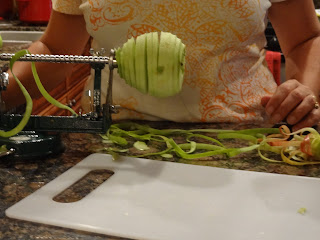 Ashley loved our slinky apples...Jeff was pretty impressed too :)

Great for getting uniform slices. 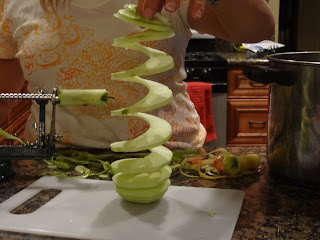 At home I filled up the rest of my jars with homemade applesauce. So far I'm the only one eating the applesauce but that's OK because at least I like it. 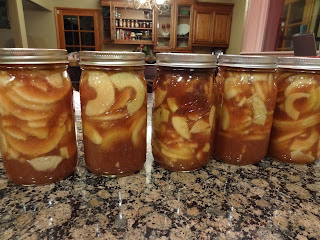 Last Thursday Taylor went to feed the chinchillas and WHOA he saw something dark and little running around.

Momma had babies again! She had 2 kits, one larger and one really little one.

So we separated everyone and rearranged the cage even though it was the middle of the night. Then I put the older babies on Craigs list at 12:30 in the morning. We had been meaning to sell the kits for awhile but I just hadn't gotten around to it...this pushed me into action.

There was a chance we were going to be out of town that weekend so we were glad that plans didn't work out and we were there when the babies were born! 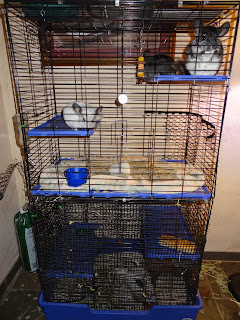 It's now been a week and the really little kit is doing great and they are both similar size now.

Mini-chimi has found a new home with a really sweet college student who has another chinchilla. She lives in an apartments of 4 college girls who come home and love to play with the chinchilla, now they'll have two. I'm sure he'll get spoiled.

I knew when she drove from Irvine in Friday traffic and then came in our house with a specially made chinchilla carrying case/backpack that she had just bought that day to bring him home in, he would be well taken care of. 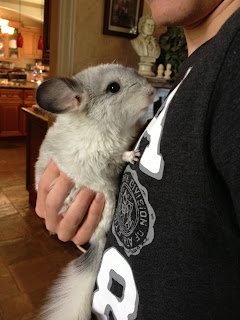 Mini churro went to another sweet family who also has another chinchilla, so he'll have a buddy. Their chinchilla is a female though so he might be having a family of his own! 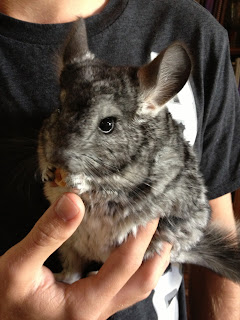 The same weekend I went to Stake Conference and was given a new calling. (Another good reason I wasn't out of town that weekend).  I was called to be the Stake Relief Society Secretary.

I am sad to be leaving the Young Women's program, but I'm happy with the women I will be working with and the new challenges ahead.

People comment that I get moved around a lot with my callings. Ha ha. I don't know if thats a good thing or a bad thing ;)  I just go with whatever I've been asked to do and hope I do my best.

One thing I got to enjoy was the Young Women's sleep over/Standards night. I have to admit I didn't actually sleep over, but I had fun participating with the girls and staying over late with them.


We made foil dinners... 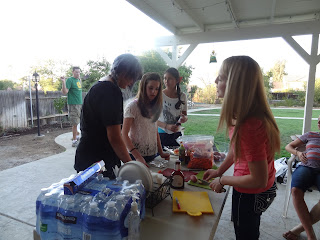 Mine was a little overdone but edible 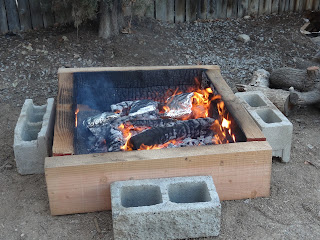 The girls put up their own tent, thanks to Nina Rioux's expertise (lots of family campouts) they were able to get it up and ready to sleep in. 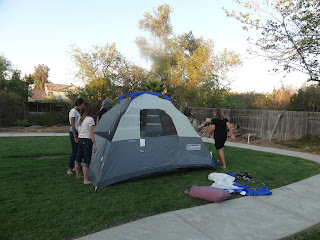 Jeff spoke to the girls and then Tara Turley and I did a little class with them. They made Personal Progress books and I had an insert that I made up for goals and to make a list of attributes they would like in a future husband. Our Young women leaders did that for us when we were young and its fun to look back at your 12 year old self and the things you thought were important in a husband. 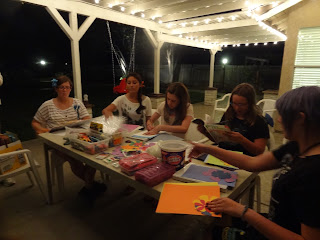 The final activity was the girls picked women in the ward that represents each young woman value and then we heart attacked their house.

It was fun to see some of the people whose house they decorated thank them over facebook and be touched that they were thought of.

I'll miss the girls but I guess I'll be there to welcome them into Relief Society when they get there! 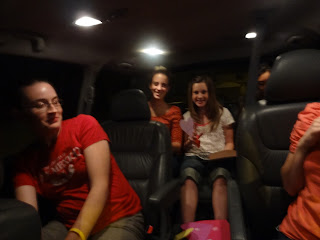 The week we got back from our trip it was parent teacher conference for the boys. I can't believe they just had a week off and then they got another day off. What was good that I was able to go over with the teachers the things the boys still needed to make up because of our trip.

Parent teacher conference is set up in the gym with all the teachers. You wait in line to talk to the teachers but you don't have to go to each classroom which is nice but it still took me 3 hours to get through all 12 teachers and I heard it from Ashley because I was 5 minutes late picking her up because of it. 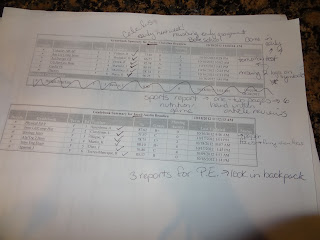 The next day was the Powder Puff game at the high school, Ashley was excited to go.

The girls play football and the boys are the cheerleaders. None of the boys wanted to go so Ashley asked a friend and we picked up Maia and went to the game.

The funnest part to watch was the cheer-leading. I have to say the 1/2 time show was worth the price of admission alone.

These guys just didn't stand there clapping and throwing some pom-poms around they were doing stunts and  lifts and all kinds of stuff. It was fun and even the girls got a couple of touchdowns. 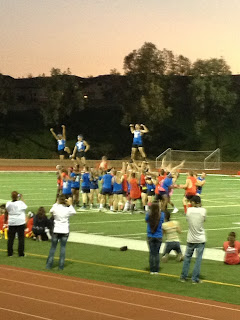 This year I finally stepped up and decided to chair something for PTA at the school. I don't mind helping but I never wanted to be in charge of anything because I'm usually busy doing all kinds of other things. This year I said I would do Red Ribbon Week, which is one week then you are done. I was basically given a budget and was told "Go for it".

Anything I wanted to do, just do.

So I started ordering and collecting stuff for Red Ribbon week at least a month before. 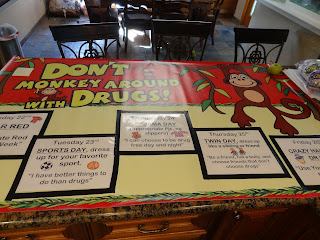 Jeff was patient with my messy preparation. 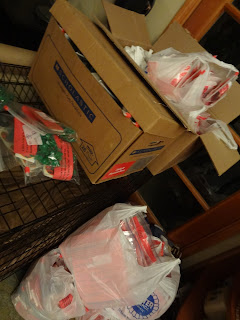 Friday after school we got a committee of students together to help decorate the school for the coming week.  (Ashley did not want to be part of the picture)

The student council were helpers throughout the week too. 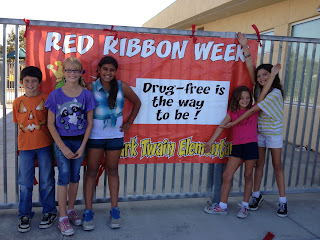 I liked having the students help because they had a lot more energy tying all the ribbons everywhere and they were very excited about it. 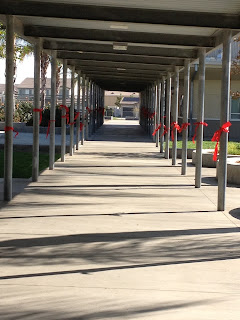 All week they got to do things like have pajama day, twin day, wear red, sports day and crazy hair.

Each day you participate you got a raffle ticket and at the end of the week we drew the tickets for prizes.

Ashley only let me take a picture of her crazy hair.

All in all I think it went good and I wouldn't mind doing it again next year. The day I cleaned up the ribbons off the poles and trees...I made and executive decision not to reuse the ribbons. I got tired of trying to untie the tedious knots on the frayed ribbons and the ones on the trees had bird poop and ants covering them. I cut those ones off quickly! 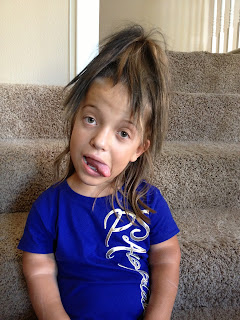 This last week Taylor got his driver's permit!

It took him about 5 minutes to take the test and it took them about 45 minutes before they graded it. Even with an appointment the DMV trip took over and hour and 1/2.

We were both glad he passed it on his first try!

He'll start his behind the wheel training in a couple of weeks. 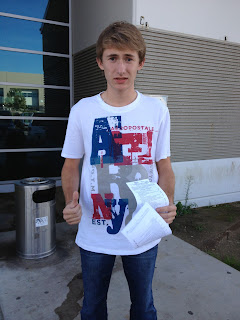 Before our trip I was asked to help paint some backgrounds for a stake activity.

I thought I would be too busy this month and I asked if she could see if anyone else could help her.

Since our out of town plans fell through I now had a bit of extra time so I repented and offered to help.

Jeff has a part to play on the actual night. Its some sort of mystery and dinner that she is concocting so I can't wait to see what she has come up with. 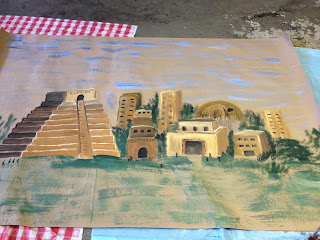 Oh and we're getting ready for Halloween over here. 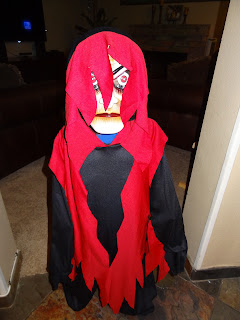 Posted by Christine at 2:53 PM

Congratulations on your new calling! I was excited for you when I heard your name :)

Wow! Out of Young Womens? Wouldn't have known that if I didn't read your blog. Good thing you keep everyone up to date on your life since we are all so busy to talk these days. They do move you around a lot but then you can't ever say you're bored. :0) Madison LOVED Red Ribbon week and looked forward to each days activities. Thanks for helping with that school event. The kids loved it.