Since Jeff and I have been out in New York I haven't been able to do my blogging so I figure today I'll make up for lost time.

Our boy who isn't so little any more turned 16 a couple of weeks ago!!!

He's not one for much attention or being in the spotlight and so when I mentioned a party a couple months before his birthday he didn't seem interested...so I said to myself "Fine I'll plan a surprise party and he can't say no"

So as Taylor was on the trek I secretly mailed out invitations to his friends, found facebook friends to invite if I didn't have their addresses and snaked one of his friends phone numbers off his phone to text her for help. She brought a stack of invites to his school friends.

This was all well and good but honestly I had no clue how many people would be able to come and who would come. It didn't help that I found out one of his friends was having a 16 party on the same night at the same time!

So I snuck around making party plans, even getting his cousin Liesl to make the trip down from Palmdale to celebrate.

I cashed in my gift certificate for a cake that I bought at the girls camp fundraiser and Nickki Bell did another awesome job with a "rock climbing" cake for Taylor. 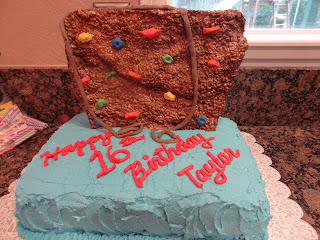 She delivered the cake as Jeff got Taylor out of the house by getting him a massage (to loosen up his muscles from pulling all those handcarts) hee hee. He then took him suit shopping which normally he would've hated but since dad had just got him a massage he didn't complain a bit.

Meanwhile I was decorating and setting up the house...this was the candy bar. 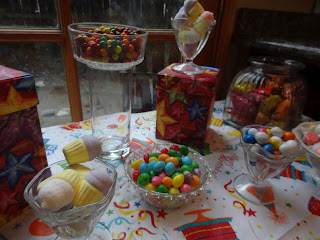 The massage place and the pizza place almost totally blew the surprise but somehow Jeff managed to cover it up.

When Taylor walked into the house he didn't have a clue! He was surrounded by friends who covered him in silly string as he was carrying in pizzas that he thought we were bringing to someone elses house that night :)  Even though Taylor came in the wrong door his friends figured it out and got him good. 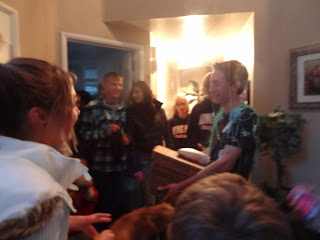 I was so happy that lots of people came! Probably 35 throughout the whole night and about 22 stayed all the way until the end! 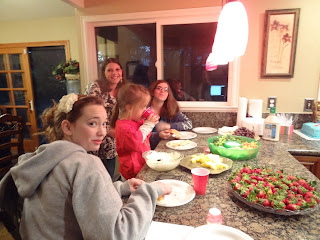 The 5 pizzas went quick and Jeff went back to get a couple more as well as exchange the dance video game we rented for the  party and didn't work. Nothing worse that a house full of kids that want to play a game that won't work. 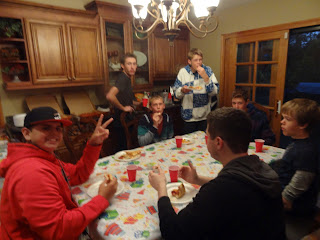 I planned games for the night too. Jeff thought they were cheesy and too young for the crowd but I persisted thinking that if they didn't like them I could be considered the nerdy one and Taylor still wouldn't look bad. 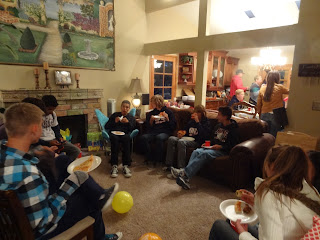 One of them was "16 candles" I hid 16 candles in plain sight around the house and gave them a paper so they could list where they saw them all. I was surprised that some of them really got into it! 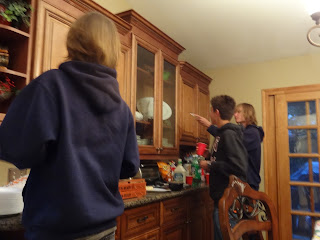 Especially when they saw that I had candy bars as prizes. Ha ha, who knew it would be that popular. 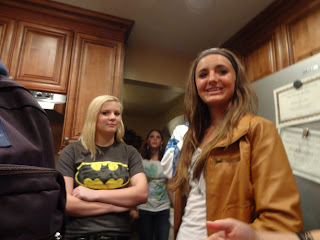 The next game was a money egg hunt that I was hoping to do outside ....but since it was pouring rain the whole day I had Ashley and Jacob hide the eggs upstairs in the bedrooms.

So we split the kids into groups of no more than 6 and then Jeff had them ready on the stairs and then released them to find as many eggs as they could. Some eggs had a few pennies, some quarters and a few had dollar bills. 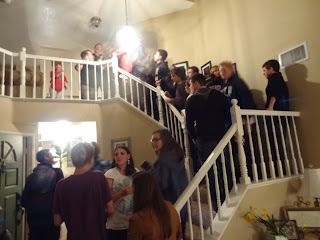 Once everyone was done the groups counted their money. The group with the most money got 2 dollar bills and the runner up got chocolate bunnies. 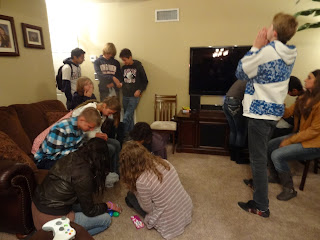 We also played "if" and "then" and "I have never" which actually stayed clean and mild...probably helped that I was running it :) 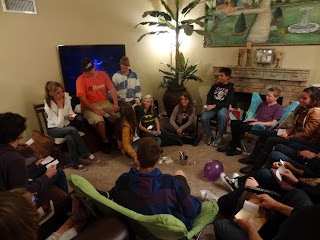 Taylor loved the party, got some nice presents including i-tunes cards, favorite candy and soda and most importantly lots of friends to celebrate with! 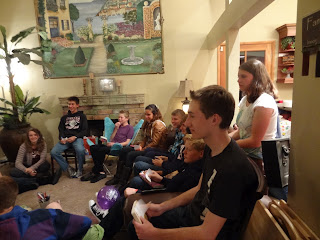 Happy Birthday Taylor!!! We love you!!! 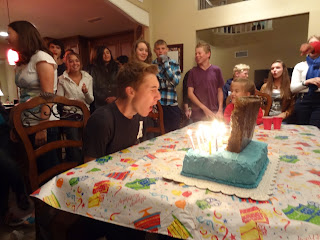 And in other news Jacob had an assembly to celebrate his grades. 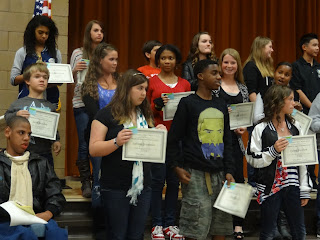 Funny story about Jacob. His science class was doing PH testing and they had to bring a liquid from home to test. He joked around that he would bring a bottle of pee. I thought that was gross but sure enough the night before he was bringing it in I see him walking around the house with a bottle of....apple juice?...no pee. He had drank 3 water bottles trying to produce enough pee to fill his bottle. He filled it and was brave enough to bring it to school.

I was a little mortified but he was the one that was going to have to deal with it. He asked his teacher if he could use it and she said yes. I asked him if anyone in his class was grossed out and he said that everyone was around him when he pulled it out to see if he was really doing it. I said "what were the results" he didn't remember, he wrote the number down and forgot all about it.

I asked him what he did with the pee. He carried it in his backpack all day, brought it home and dumped it in the toilet and then threw the bottle out. I asked him why he just didn't dump it out at school.

He told me "No, that would be gross" 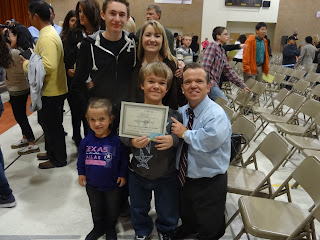 Ashley loves babies. She keeps asking me to have another one...I tell her just enjoy everyone elses :)

Baby Violet was so sweet! 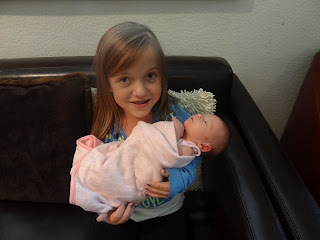 Since Ian and Liesl were down we made sure they came out with us so they could see Cheri and Ryan and the kids. They spent more time on the piano than holding the baby.... 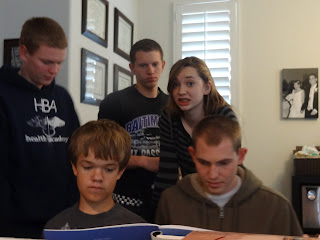 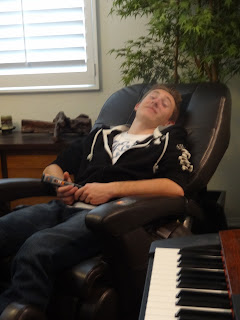 We're so happy for you Cheri and Ryan and Olive. 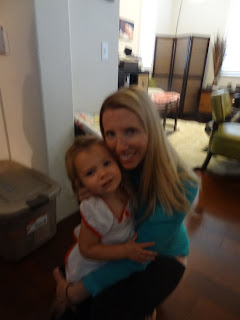 Posted by Christine at 9:29 AM

Really loved your blogspot. What fun the party must have been. It's been ages since I turned sweet 16 -
70 years....

What a fun party!! I love all of your game ideas. At 23-years-old, I would still have been into them ;) So I'm not surprised that the teens liked them.