So after we got back from New York Jeff was off a day later to another convention for New York Life...(who planned that I don't know)

So let me explain this picture. Sweet husband that he is he brought me flowers even though we celebrated it that weekend.

There are cards on the left...they were supposed to be sent to my visiting teaching people since I was a slacker and didn't get visiting teaching done before our trip...then I didn't mail them in time and got fat 0's for the month. Well it always makes me try harder the next month.

The bottle is the medicine that Jacob has been ordered by his ENT to take. He failed the school hearing test....twice. His ears are full of fluid, so it's either try and take this medicine and see if they get better or get tubes again. He has to take 6 pills a day...the bottle says don't take more than 1 in 24 hours : /

The cigarette looking boxes are candy cigarettes. Jeff picked them up and brought them home from Vegas for the kids after his convention. He likes to tease Ashley with them. he also likes to tease other people apparently. Jeff walked into his secretary's office with one of them coming out of his mouth and shocked her until she realized what it was and laughed about it. 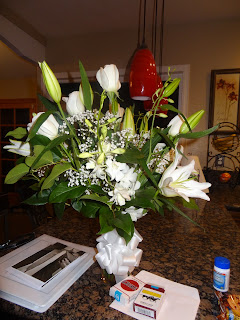 After Jeff got back from his convention we got ready to host family for a combined early mother's day and celebration for Taylor being ordained to the office of a Priest. He turned 16 and can now start blessing the sacrament :) 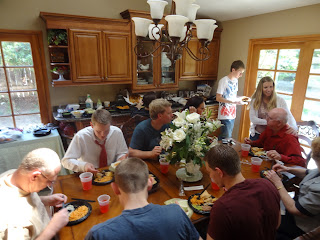 It was fun to have the babies around and have lots of people to play with them. 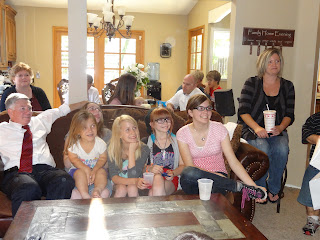 Grandma getting her presents for the day. 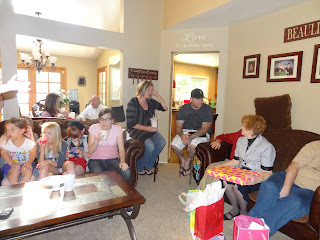 We also played Maffia and other games. My kids have played Maffia at other parties and they said its boring because the only ones that are loud and crazy like our family...is our family. They always love game time. 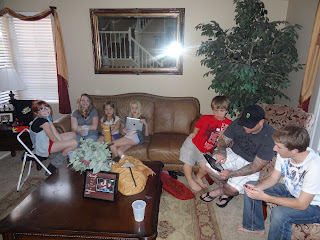 The next day Jeff left for ANOTHER convention.

The next day the rest of us went to Scott and Jenn Williamson's to watch the finale and find out that we are officially the winners of the Amazing Race this season...well not us personally but we picked the winning team.

So now we are the temporary guardians of the Roaming Gnome! We are so proud ;) 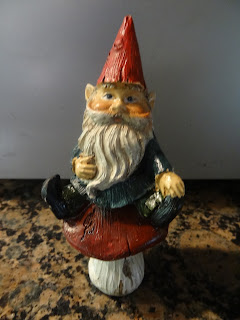 This weekend Ashley lost a tooth.

She said she has officially lost 18 teeth now.

The problem is they are stuck on her wire because of her braces. It's a pain because we have to call and find a time to go down to the orthodontist's office to have them use the tool to get the little rubber band off and unleash her tooth.

I didn't really want to do that...besides it was Saturday and they weren't open.

I tried different things and nothing was small enough to get that rubber band off.

Then I thought about it and grabbed a sewing needle.... 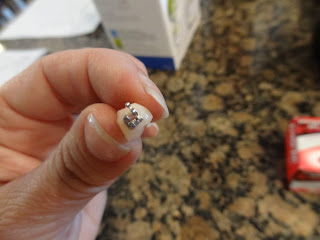 pulled out my jewelry making tools and created my own little hook and got the rubber band off and the tooth free! One less trip to the orthodontist! 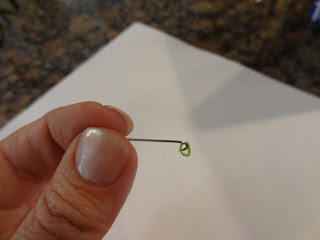 Saturday at 6:30 I was over at our Young Women's yard sale helping sell stuff so the girls could go to girls camp. We were also making cake balls (the brown and white chocolate covered things).

They had a LOT of cake balls to make that day. I helped decorate the boxes (in the background) and then I had to leave because Jeff and I had a wedding in San Diego. Luckily all the kids had plans or a friends to stay with that day. Taylor went to the mall, we dropped Ashley at her best friends in Murrieta (she moved and Ashley doesn't get to see her much) and Jacob's friend invited him over and they swam all afternoon.

We got to the reception and it was a luncheon right by the beach. It was a beautiful day and afterwards we walked along La Jolla just to enjoy it a bit before the long drive back. The purple and blue chocolates are shells that someone made as party favors for the wedding. That would've taken a lot of work! 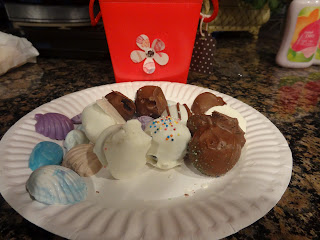 My mother's day was wonderful!

As soon as Ashley got up out of bed she brought me Mother's Day card she had made me.

The boys both said "I love you mom" on  their cards. That was enough :)

Jeff got up and made omelets for breakfast (with the new pan in the back) He bought be an attachment for the KitchenAid mixer. Don't know how often I'll use it but it looks like it does cool stuff.

My favorite present was the lotion that was given to me by Taylor! His first present that he gave to me that he bought by himself, with his own money, without being asked ;) 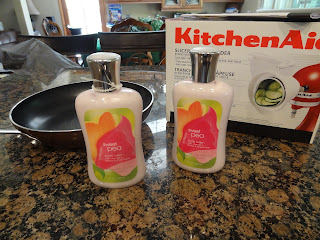 I loved even more the story he told about how he bought it and then had to hide it as he came home. His friends were assisted by an overly helpful sales assistant that had them try products in an attempt to get them to buy.

Taylor told me that she had him try this one lotion and after it was on he saw that it was sparkly! She said "This lotion leaves sparkles on you!!" (probably not a good idea to try on a 16 year old boy)

Then she had him try this hand soap that was supposed to make your skin all soft. He said it felt like sand was in it. Ha ha, it probably was. He didn't like it and thought it was weird.

The fact that he endured the Bath and Body store and came out with something for me was the greatest mothers day present ever.

Being a mom myself makes me appreciate my mom that raised all 5 of us girls! Thank you mom!! Love you!!

Posted by Christine at 2:02 PM

That story about Taylor is too cute...what a thoughtful son! Whose wedding did you go to?? We were in San Diego for the first part of the week and would have stayed for Kyle's cousin's wedding, but Steve got married that same Saturday in L.A. The cousin got married in the SD Temple and then had a reception by the beach, so I'm curious!

Oh it was Nicole Sadeghi's wedding. Do you know her maybe?? They met in Utah and her groom was from New Mexico. Sounds like a popular week for weddings!!

You will love the KitchenAid attachment. I have borrowed the same one many times (before my kitchenaid died) and used it lots. :)

So proud of Taylor! That's a pretty big deal. Rock on, Taylor. Rock on.

Whoops, I never checked for your answer! Nope, different ppl...just a great coincidence I guess :)