This Easter was a pretty low key affair. Jeff and Taylor were recovering from the trek. I was speaking in church and other than our combo Easter basket for the kids there wasn't really evidence around the house that it was truly in fact Easter.

At one time we were entertaining the idea of inviting family over but it didn't really work out (including one of them having a baby that day) and good thing because that day we were all tired.

Then the Merrills came over and brought us this...wait let me unwrap it.... 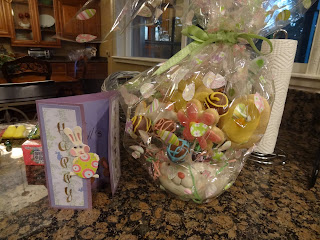 How adorable. Home made cute decorated cake pops and cookies. Anna is so talented! I've been meaning to send something back in return....it's been a week...I guess I should get on that. 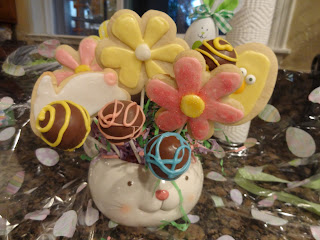 So the week before Easter was spent getting ready for, participating in and recovering from this years Pioneer Trek. I didn't get to go but I got to hear about it, helped a bit and enjoyed the stories.

Jeff has participated in some way since the stake started doing the treks up at Riley's farm.

The youth were up in the back woods of Oak Glen for 4 days. Camping under the stars, pulling handcarts, eating their own dutch oven cooking and getting what sleep they could in the cold nights.

They have some real authentic looking old timey pioneer types up there at Riley's farm. 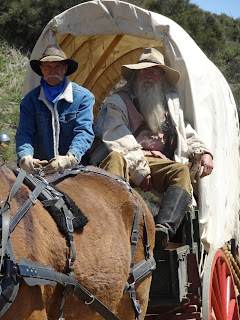 Covered wagons and horses pulled some of the gear. 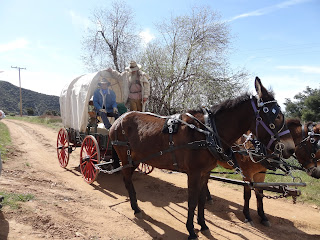 Everyone else had to pull their own. 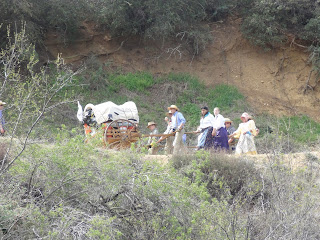 There were about 120 youth that participated and with adult leaders the group was up about 180. 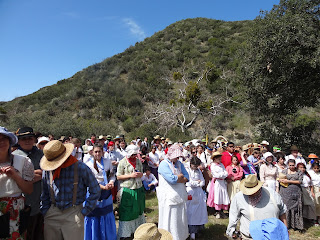 Hee hee hee the camera caught up to you Taylor :) 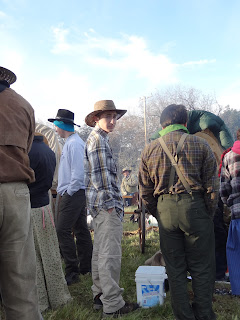 Can't believe some of the hills these guys had to pull the carts up. 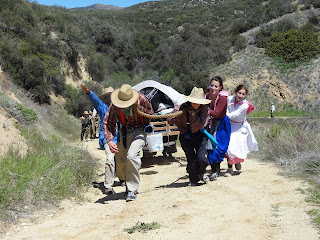 This reminded me of the primary song...."Some may push and some may pull as we go marching up the hill...."  I don't think these guys were singing at the time though ;) 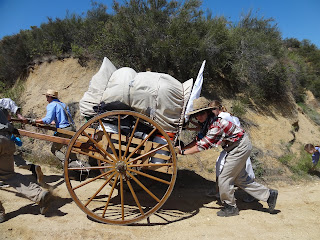 For breakfast every morning and dinner every night the families would get their dutch ovens out and start cooking.

Taylor said by the end he was tired of 1/2 cooked potatoes. They would get their stuff 1/2 done before it was time to move on. (I wonder how many pioneers would get 1/2 cooked food too) 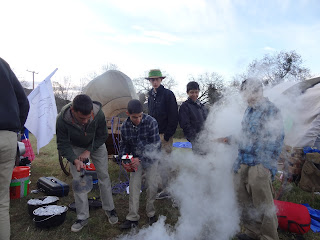 I'm sure these guys got pretty skilled by the end. 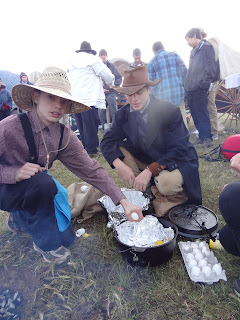 Ohh I forgot each family had a "baby" that they had to carry the whole way. It was a sack of flour, but it couldn't touch the ground while they were walking they had to take turns holding the baby. 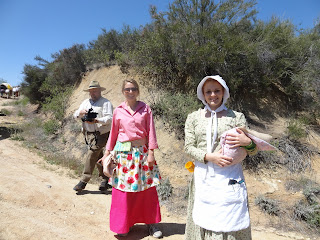 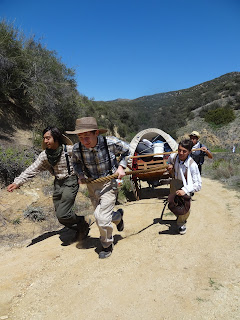 Some much deserved rest. 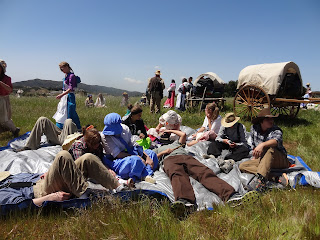 I bet there was some flopping on the ground to rest way back in Pioneer times too. 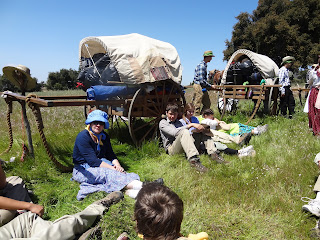 Savannah (one of my Laurels) and Jacob. 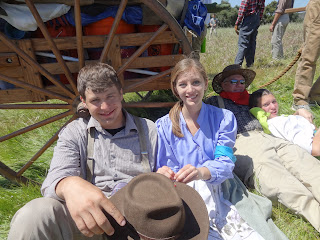 Taylor hanging out with Alex Vega and his other youth conference brothers. 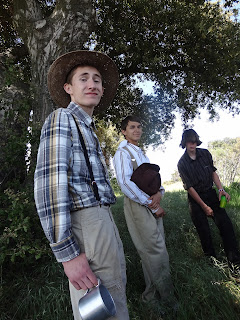 One of the days they had to take the carts across a "river". Someone had to get the rope to the other side to pull the raft so someone ended up volunteering and jumped right in and swam to the other side! 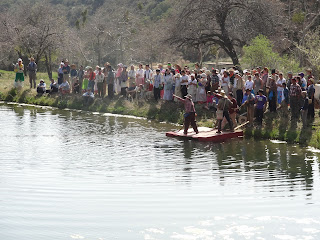 Jeff said there were times the raft would take on water and look like it was going to sink. Jeff mentioned his concern to one of the other leaders and he said 'It's fine if it sinks it would just add to the experience"....luckily nobody sank. 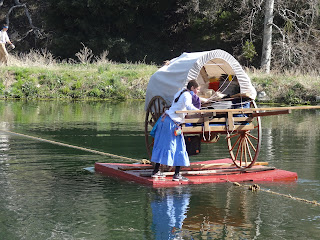 Here is Jeff and his crew. He was working with Jeff Loveland and the emergency guys. Jeff drove the Rhino (to his left) the whole time....the WHOLE time. He would drive people who were struggling to the front of the group or the drop off point. He drove speakers around, drove people to their car, picked up the trash and drove it to the front...and on and on. He came home each night dusty and tired and then woke up super early every day to do it again. Even though it wiped him out he had a fun time. 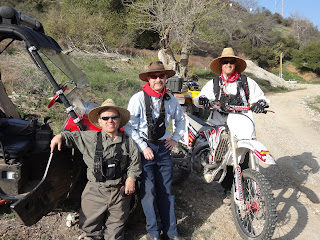 Taylor and some trek buddies. 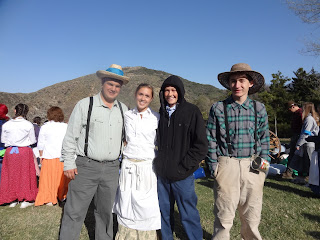 Throughout the trek they had vignettes and got to listen to historical figures tell their story as well as reenact events from history. 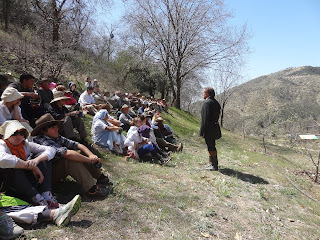 They got to hear Joseph Smith, Brigham Young and others and the boys at one point went off to join the Mormon Battalion leaving the girls to pull the handcarts up a huge hill. 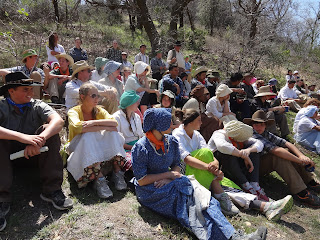 The last day was the most strenuous of all and I was proud to hear that Taylor went up and down the hill and helped 8 out of the 12 handcarts get up the hill to the top. Then he went over the ridge and saw lots of people just sitting around not doing anything. (So like life) 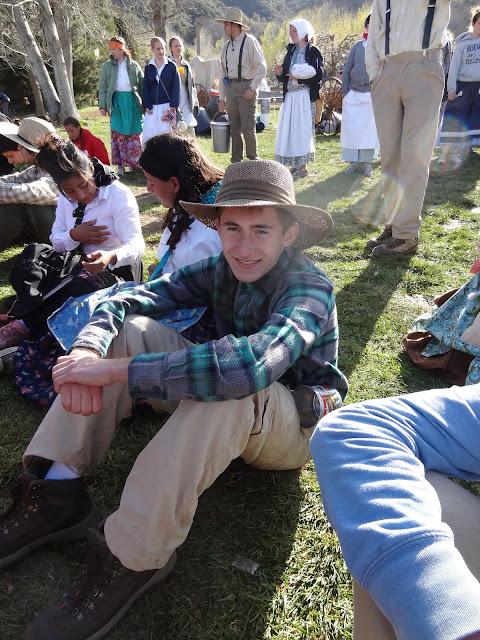 In the end I asked Taylor what he learned. Pretty much a deep respect for what the pioneers did (I don't think he'll ever listen to a pioneer story the same way anymore) and an appreciation for a roof over his head, a bed and clean water.

(He said that the water ALWAYS had stuff floating in it and after cleaning everything out over and over he realized it was coming from the water source which was a big water tank! :)

Posted by Christine at 5:55 PM

It's great to see photos from the famed trek. It looks like such a great experience. Taylor looks great in his outfit!

Wow, that is just too cool. And it sounds like a lot of hard work too! I thought it was funny that one of the leaders said if the raft sank it would just make the experience more real, ha ha.

Taylor experienced the same thing the youth in our last ward did- our ward helped pull every wagon up the final, killer hill then got to the end to find everyone they "helped" by pulling their carts just hanging out.

The one good part is I can say those who helped can feel the pride in a job well-done!

Therefore, well done, Taylor! I know the final hill can wipe out some of the strongest and you helped others get there!

I love the trek. What a sweet experience!