I have a tracker on the side of my blog (to the left). I put it in to ward off discouragement from the lack of comments. It helps me know people visit...even if they don't comment.
(lurkers and others feel free to comment any time :0)
What gets me is how in the world do I get people from far off countries visiting my blog?? Well the tracker tells me what kind of search they did to get here. I have NO IDEA how some of these searches led them to this blog but I think it's pretty hilarious that they did. They got here by searching for...
﻿o Artist spry caricatures
o Wat bulie pits eat
o Tadpole costume ideas
o Loose baby molar stuck by root
o Caricatures crazy
o Nacho libre the part where he says your mama liked it she said it was fine
(and my favorite)
o How do you sell your soul to the devil for soccer
Anyway on to the week. The boys have had so many of their own activities that Ashley hasn't had much going on for herself since we quit her cheer class. So this week she was thrilled to start Activity Days again (and came home with this plate of yummy cookies)... 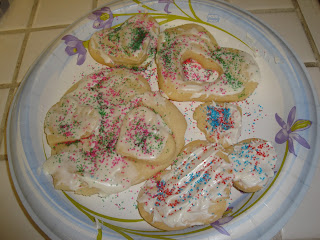 ...and she's starting choir at her school. Its the first time they've tried doing this and they had probably 160 kids there for their first rehearsal. I'm thinking it'll be a logistical nightmare for the 2 teachers who volunteered to do it but I'm sure glad they did. Our ward Primary chorister was there too and I wondered if she was glad that she didn't have to lead this many kids in Primary :)
(This pictures is of one little group, there were kids lining both sides of the gym too trying to do a "Row Row Row Your Boat" round. 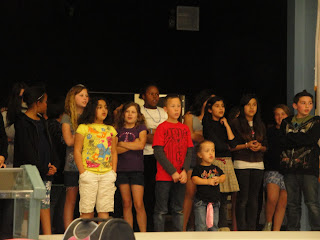 As for Jacob he is loving his rehearsals for The Wizard of Oz. He is playing the part of the lion and is hamming it up. He got everyone laughing at his fainting scene and is having a good time. They cast 2 of each of the main characters and they will play in one of the two performances (to give more kids a chance). The other lion hasn't come to the last couple of rehearsals so Jacob is getting double time and double the laughs.
On Friday   I was walking with the dog to pick up Ashley and all the sudden Kristin Paige and Jacob pulled up when I was 1/2 way to Ashley's school. I guess Jacob decided to go to the after school dance last minute so they had tracked me down to sign the permission slip to let him go. Poor Kristin had to drive him all the way back to the school (and her daughter was home sick the whole time). We told him he couldn't do that again, Kristin was a sweetheart about it though.
Taylor is enjoying running again. He has started training for the track season and I'm glad he's back out there getting exercise with friends. He is also excited to have a game night over here on Friday with some friends. He's going to borrow some a couple ideas from the game night Jeff and I went to last Friday.
At the Williamsons fun game night they played a "Who, what, when, where and Why" game. You make up each section, fold it, and pass it to your neighbor. The girls were on one side of the table and the boys on the other, lets just say the papers that rotated on the boys side were much more colorful than the ones on our side. 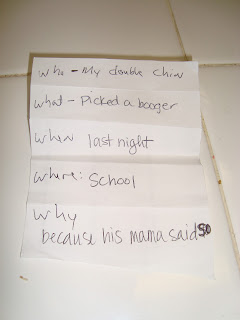 Taylor also had a friend at school selling girl scout cookies. He asked me if we wanted any and I told him to get a box of Caramel delights and one Thin Mints. When he got home yesterday he only had the Caramel delights. He had given the Thin Mints away. What!? He said he thought he was buying them for himself and since he didn’t like them he gave them away to a friend who likes them. Puzzled I said “why didn’t you just give him some of the cookies?”  he said “Mom, that’s like having a happy meal for a homeless person and only giving him the fries!” OK.  Anyway he said he’ll buy me another box with his own money. Crazy kid.
On Saturday we worked on rearranging our loft, switching the computer out, moving around furniture and cleaning out JUNK. It's still not pretty so I won't post pictures yet. ;)
That night we went to dinner with couples in our group of RCC season ticket holders to see The Sound of Music. They did an excellent job and the kids who were acting in it did great! We had originally wanted to bring the kids but they weren't really interested.
At first Jeff lamented that they weren't there...until we realized that the whole thing is pretty much just singing. We loved it but they might not have. 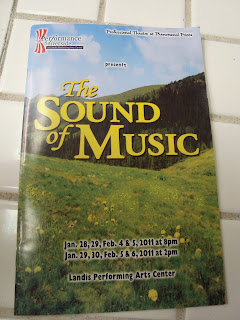 Sunday we were invited over to the Williamsons (different Williamsons) for Hometeaching, dinner and Superbowl. They were very nice to have us all over and had a taco bar for dinner along with our dessert we brought to contribute, we had quite a variety. The kids all played upstairs except Taylor who stayed on the couch the whole game and watched every bit of it.
I realized this was the first time he'd ever watched a game other than a couple of minutes of one. We don't normally watch sports on Sunday and Jeff hates watching TIVOed games (once the scores are available it's no fun for him). Taylor actually liked it.  I was in the living room for the end of the game with the other moms watching our girls performing their made up song and dance routines. There were dances, raps and all kinds of variations of playground songs.
Tim and Andrea had a game to guess different aspects of the game. Jeff guessed the total points by half time (on the nose) and I guessed closest to the total points by the end of the game (a total guess) and we got candy for prizes!  They did a great job. 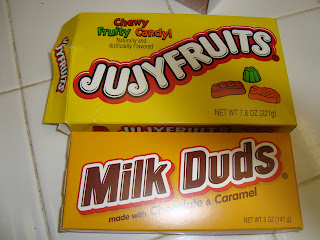 This week my cousin sent out a plea on facebook asking for advice on their decision to get a dog for their family. I told her that my kids have been in heaven with our dog...especially Ashley. 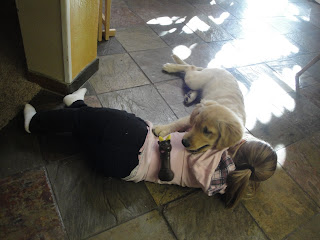 I've started walking to Ashley's school to pick her up with Maddie and Ashley's has enjoyed it. It gets us both out of the house more and it lets her friends see her puppy. While she's walking the dog has a habit of picking up trash with her mouth. Usually she puts it in her mouth for a minute and then drops it. The other day she found a vodka bottle and held it in her mouth for ½ a block. I wished I had my camera!
Later on she spilled out her basket of toys and started chewing on the basket. She ended up with it hanging from her middle looking at me as if to say “Now what am I supposed to do??” I did have my camera for this one. 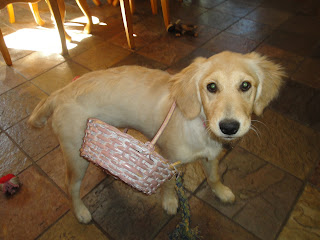 We've had to stop putting the cat food on the table because now she knows how to get up there. (Here she's eating the table cover) 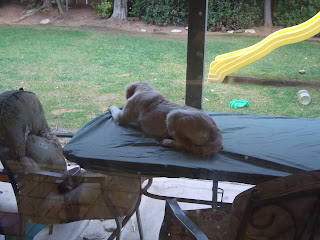 One of her favorite "toys" is the coconut Ashley brought back from Mexico and forgot she had in her room. She's chewed off the fibers from it and whips it around hitting herself with it and throwing it all over the yard. 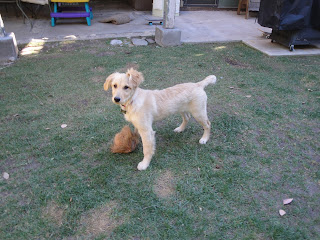 On Thursdays I've been trying to bake for Jeff's Friday morning meetings with his guys and for Taylor to bring something to seminary. I tried making coffee cake muffins for Taylor for seminary using a yellow cake mix. It turned out OK but all the topping sunk into the cake so you couldn't really tell it was supposed to be coffee cake. I handed him his tray to bring with him and he gives a grimace and says “What is that black stuff?!” (I don’t think he really wanted to bring them). I assured him it was bits of brown sugar and cinnamon that was supposed to be on the top. He hesitantly took it. He told me later though that it tasted fine J.
I was so good about getting it out of the house that morning (so I wouldn't eat the rest of it) that Jacob came home disappointed "There isn't any left!?" I guess I'll have to find some way to lock tempting food away from myself when the kids are gone from school other than getting rid of it :)
Posted by Christine at 2:04 PM

No body ever comments on my blog either except for weird people I don't know. So I thought I would take the time to say that I enjoy reading about all the fun adventures your family has even if I don't comment much :)

I've been awful at following blogs since Gwen was born. Got my hands blissfully too full. My little Reid absolutely loved the pix of your pooch! :)
Happy to know all is well. It looks too sunny in your pictures...

I totally understand the discouraging thoughts with lack of comments- but I just have to remind myself that I do it for my family as a journal more than for anybody else... But it is still nice to get them. ;)

I read your blog every week. I don't leave you comments because I would rather call you :) . so just know I am reading. Mary ann

So funny. What random key words to look up. Funny. Well Maddie is getting soOOOOOO big. The basket picture made me laugh out loud. AND>>> I didnt know jacob is in wizard of oz....thats what i get when i dont go to the gym for a few weeks. But Im ready and we can get caught up now. :)

I didn't want to leave without leaving a comment. Nice to meet you!