This last week the boys had haircut appointments. The hair stylist is across from Trader Joes so I thought I'd go shop while the boys were getting haircuts.

I thought better of it when I walked into the salon.

Taylor - "I want something different. I want it short ... like a buzz cut."

What!! I had ended up having to stay and carefully oversee the haircuts. Poor Norma's head was spinning by the end trying to follow conflicting directions the whole time.

Jacob got enough off his hair to look like he actually got it cut and we compromised with Taylor to not get it too short. He got it short enough to spike. (Except for church:)

He now has a kid at school that keeps rubbing his head every time he walks by, he said it bugs him because he takes all the gell out of it.

One kid said "He looks like a peacock that escaped from the zoo!" 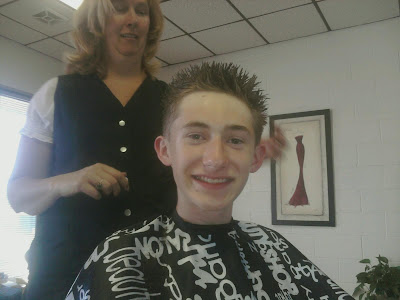 In case your wondering the baby chinchillas are doing great. 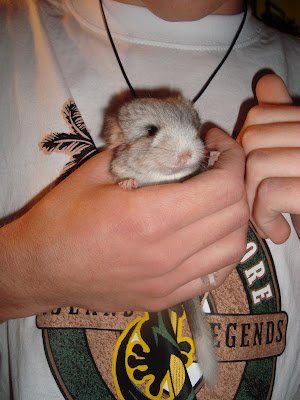 The Scotese girls came over last week to see how they were doing. They were their rescuers as they escaped and were running all over the house while we were in Hawaii. 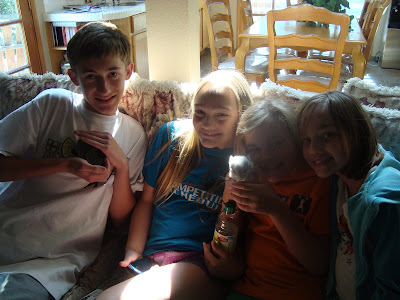 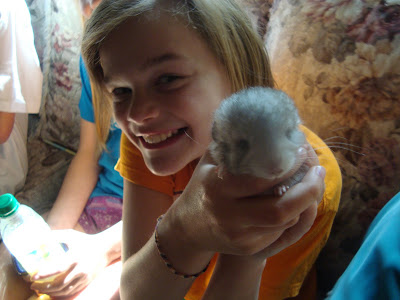 Two concerts, same place two different times. We were at King for a looooonnnnggg time on Wednesday (no time to go home). That's OK Jeff met us there and the kid had snacks so they were fine. 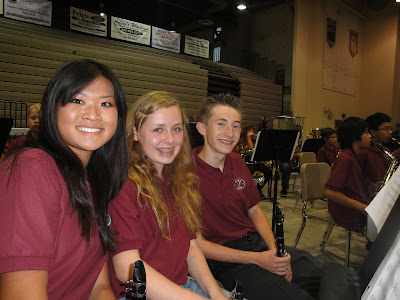 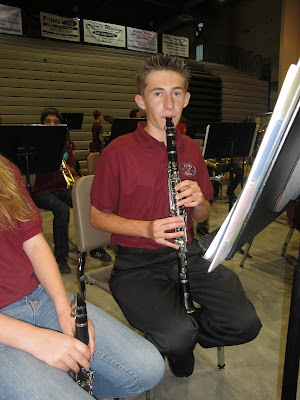 Jacob is part of advanced elementary school band. Boy you could hear the difference from the beginning band, to the junior high band to the high school band. It's fun to see the progression. 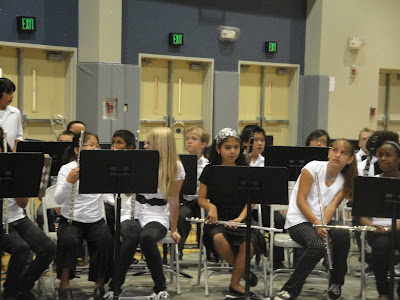 On Saturday Taylor started the first of his book deliveries. He had about 4 or 5 boxes for the Woodcrest library. These were books that didn't fit his criteria for the other places. 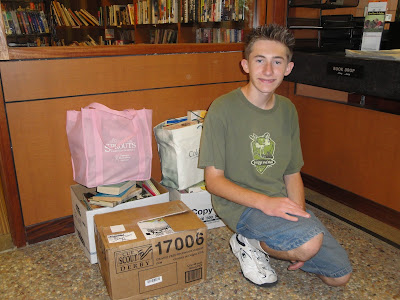 While the boys were doing their Saturday Ashley and I went to Cheri's baby shower. 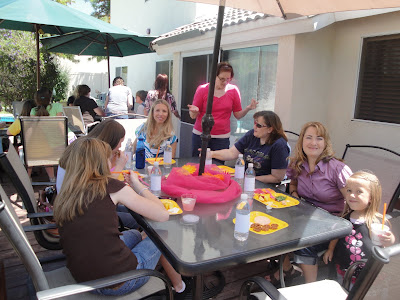 Yummy cupcakes on the cake tower. 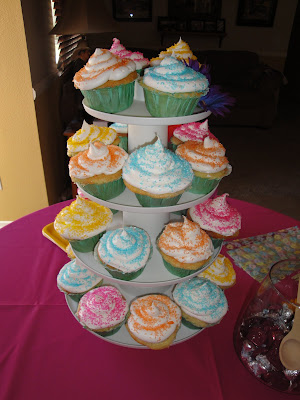 Cheri's friend and Sarah did a great job with the shower. They had great food, the decorations were great and they even had games!

Ashley ended up winning the "don't cross your legs or I'll take your safety pin away" game. I was actually suprised that she won but I heard later that she had a lot of helpers who would secretly cross their legs in front of Ashley and then give her their pins. Ashley was very quiet about it and sure enough every few minutes I was shocked to hear she had gotten more when I hadn't seen anything go on.

I thought it was funny that so many people wanted her to win but I don't think she made any friends with the other cousins that were trying to win the game too. Ha ha.

It was fun to celebrate Olive's anticipated arrival with all the family. We're so excited for you Cheri and Ryan! 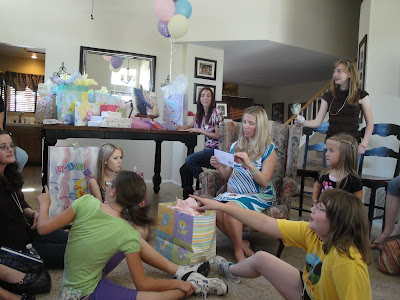 After the shower Liesl and Elsa came over to the house and hung out with us so Lesil could go to the Stake dance that night with Taylor. As I walked in the door I found out that we had been invited to a BBQ swim party as a family...happening in less than an hour. Jeff was out buying hotdogs and buns for it and I scrambled to find some sort of bathing suits that the girls could wear. Luckily I found something and we had a great time at our friend's house for a couple of hours before it was time to get ready for the dance.

Here are the 3 cousins ready to go. Taylor also actually had a non-member friend come with them too. Taylor and his friends had told him about the dance and at first he didn't want to go but the day of the dance came and he frantically texted Taylor 4times saying he wanted to go. So from what I hear they all had a great time that night.

Ooooh about that texting. We ended up getting Taylor a new phone for his birthday complete with texting. It has a keyboard and a touch screen and he's really happy with it. The problem was we had to change our plan to unlimited texting after he texted over 300 times in 3 days (his limit was 250 a month). He actually was embarassed that it was that high...he said he had no idea.

We have his screen protector on order but until then...he puts it in his pocket with a Kleenex around it :) 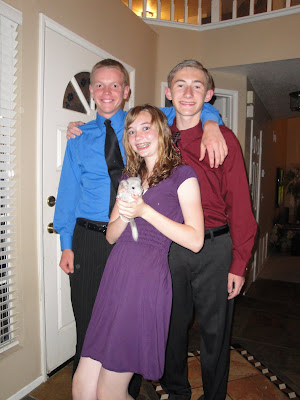 The next morning was Mother's Day. It sure came early after staying up late getting everyone home after the dance the night before. Well with no meetings and later church we all slept in. Nice.

We made breakfast burritos for...brunch...it was like 10:00 or something and enjoyed hanging out as a family.

Presents were given along with cute handmade cards... 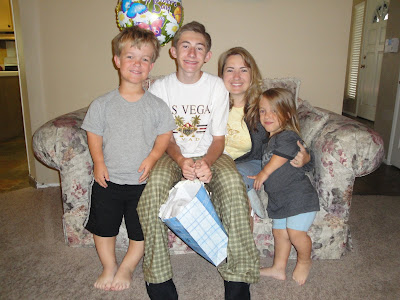 and I was proud to wear the beautiful corsage that Jeff got. (Thanks honey!)

Jeff also got me the chocolate covered strawberries that young women were selling. I think this was the first time they attempted it because the girls made them a couple of days before they delivered them, sealed them up completely and I'm not quite sure if there was refrigeration going on the whole time. One of our bags ended up with 1/2rotten strawberries swimming in a sea of juice with the chocolate falling off. The young women were kind of embarassed and would've understood if we didn't buy them but they had already put in the work and our name was on it. Have to love a husband who supports the young women anyway!

I shared what we could salvage with the kids after diner and then we threw out the rest :) :) 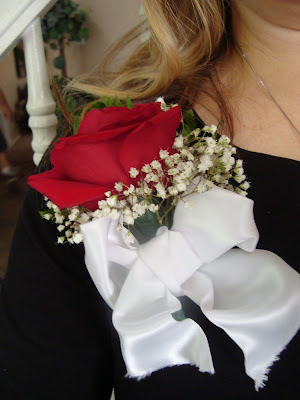 After church I enjoyed time with the kids and even got to play a monopoly game with Jacob and Ashley...after she cleaned up a little. It was her first Monopoly game and she was playing the banker too. Jeff started the game but got too busy helping make dinner and cleaning up so she had to fill in...maybe that's why I don't normally get to play games with them :)

It was a wonderful Mother's Day honey! 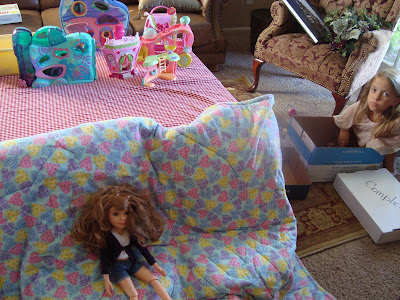 Monday night we had a lesson and went around delivering goodies. Since I've been back from women's conference I've regained that desire to serve more...love it! It's amazing when I am more spiritual I do so much better in life in general, I'm so much happier and am more willing to reach outside myself. Easy to know...sometimes hard to put into practice :) 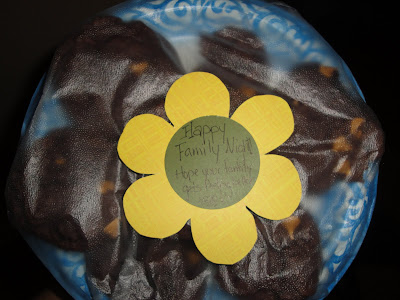 Wednesday Cheri came over and and we got to scrapbook. How fun! I haven't pulled out scrapbooking in a long time. I always have something more pressing to do...or something I should be doing...some excuse not to pull it out and just create. It reminded me that I need to take the time to create more. I loved looking at the pictures of the kids when they were little and oh so cute but I most especially liked hanging out with Cheri and getting to talk to her one-on-one.

When she walked into the house Cheri commented on how quiet it was. She's only ever been over when there are crazy family things going on and every time she's on the phone with me the kids are home she hears all kinds of piano pounding in the background. Ha ha. It was a very nice day! 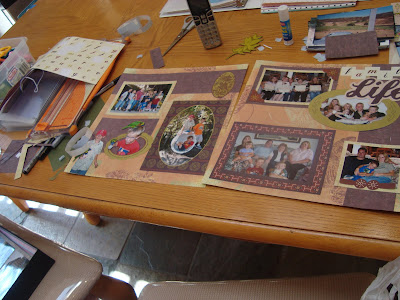 Posted by Christine at 5:47 PM