THE BEST KIND OF THANK YOUS!

The best kind of thank you's are ones like these. Jeff brought back these boys a souvenier from Hawaii and look what he got. So cute! Just made his day! 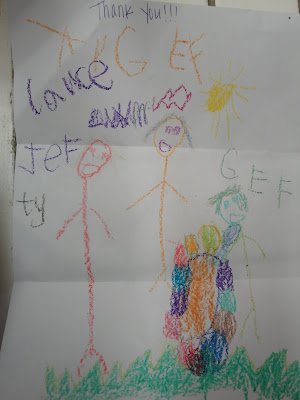 HELPING HANDS AT THE BISHOP'S STOREHOUSE

Our ward was supposed to have 6-8 people come help at the bishop's storehouse this last week. This is the crew that showed up!

Along with the other volunteers we were done in record time. They said they had never have gotten done that quick in the morning! 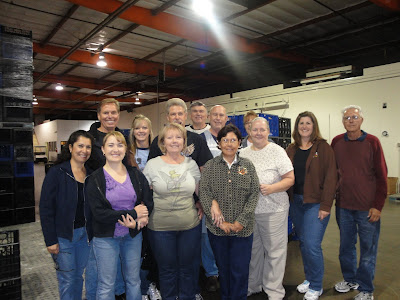 A few of us stayed longer and got to help up front in the store and then they fed us lunch at the end. Nice for a change of pace and to feel like you are serving :) 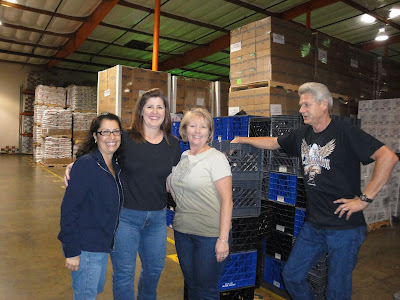 The next day I was stuck home all day manning the revolving door of repairman. The bug guy came, the gardeners, the piano tuner and a tree trimmer.

The tree trimmer was a new guy that talked Jeff into letting him come while I wasn't home. He offered to come take out our dead plum tree in the front of the house and clean up our forever growing Eucalyptus. (We just had it trimmed last year)

Jeff told me "You know that tree in front of our house is dead?!" (I've been telling him that for months!) He asked me "How did you know it was dead?" Well I pointed out it hadn't grown leaves in over a year and a half, it's almost black and all the limbs are splitting.

This wasn't our normal guy but I was just glad to get rid of the dead tree. I could see why Jeff was talked into it when I met him. Boy was he a talker!!

He talked and talked and talked too much telling on himself...so much so that I started thinking he was making himself sound suspicious. He told me about our gardener who just got his brand new blower stolen (he said it had already happened when he pulled up), he told me the whole story about how his license expired and it wasn't paid up (after the job was done) and how there was a hole burned into the invoice...and on and on.

Well in the end he worked hard and did a decent job. I had to resist his attempts at getting me to pay more money though. He had to tell me at least 10 times that he did WAY more work than what we were paying him for. He kept hinting at an amount twice what we agreed on. So I gave him praise telling him his efforts would earn him referels in the future for working hard and then gave him the amount we previously agreed on.

I didn't think he was too bad until I saw our ladder that he didn't put back.... 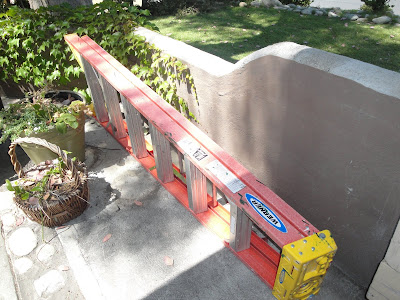 and all kinds of bush pieces left all over including his soda can from the soda I gave him! 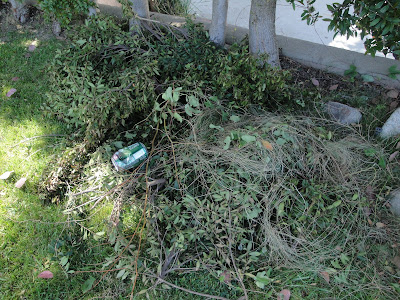 When Ashley got home she was very upset that we had cut the tree down. Despite the fact that it was dead and dangerous to have around. She cried and pouted and was very mad at me. By the next day she realized it was her new sitting spot.

I had to laugh when literally two days later I had a different tree guy try and tell me the Eucalyptus needed to be trimmed. I was on the phone at the time but he still handed me his card and tried to go on and on about trimming it. I tried to tell him we had just got it cut. He insisted and went on to tell me how dangerous it was and it needed to be cut. 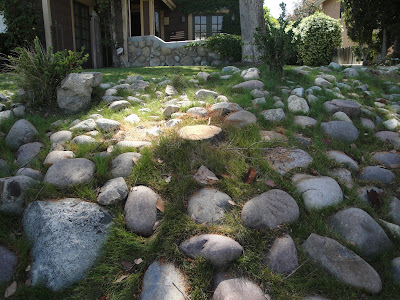 The next day I attended the volunteer tea after school. This is the time where we get our preprinted certificate printout for all the time we volunteer in the classroom. There were snacks and soda and the teachers hanging out with us giving us long stemmed carnations. I just realized I should've taken a picture of Jacob and Ashley's teachers!

I love it when a teacher gives a personal hand written note expressing their appreciation that always means a lot to me or something that is unique from them. Mrs. Bowyer painted me this canvas that has the Korean words for thank you on it. 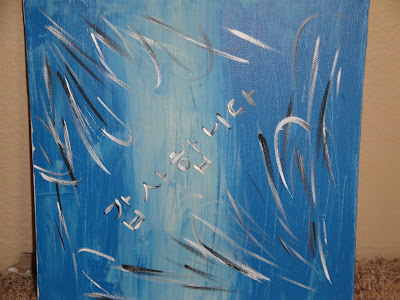 Mrs. Hall invited Jacob to play the piano for the event. He was flattered that he was the only one asked out of the school. He played his two recital songs over and over for about an hour. He got a lot of practice in that day and this morning his teacher was impressed at how well he was doing on them. (I'm sure it was all that practicing) 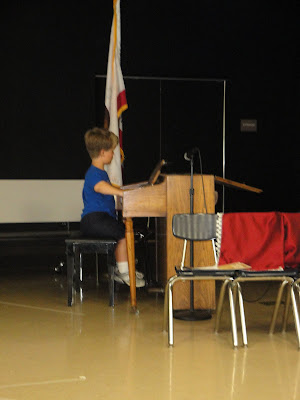 Jacob, his friend Adam and Ashley have officialy started their snack store. They call is "J and A Snacks" (For Jacob and Adam. The A is for Ashley when Adam is not around)

They are selling slushies, gum, chips and popcorn from the campout that wasn't used... 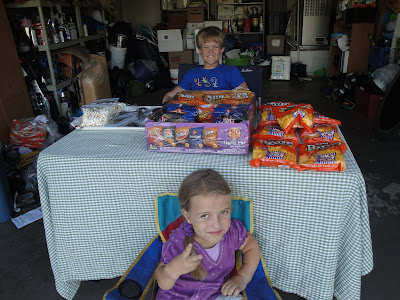 Kettle corn (thanks to Piper's recipe) and brownies. They keep adding items that they find in the garage that I've bought from Costco. I think I need to start taking a cut! :)

So far Taylor has been their best customer since I gave the last of the brownies to their store and he had to buy them to be able to eat any more. 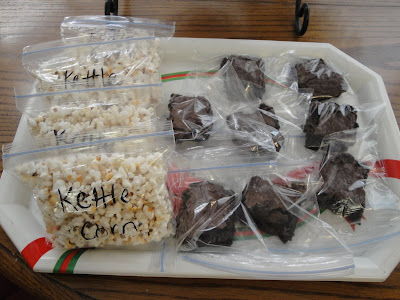 "SERIOUSLY?!?" This is the line I was met with as we got to soccer sign ups. I got there at 9:00. It opened at 9:00. And the line was already forever long. That building way in the distance is where we had to go.

Jeff and I had a temple session at 12:00 for his cousin that was going through for the first time. I immediately started stressing. Am I going to make it? I said a prayer that somehow I would be able to make it to the temple.

This was the last day of sign ups so I was stuck. We waited and waited and it wasn't long before Jacob told me the line went all the way back to the fence.

Almost 2 hours later I finally got inside but then there were two more lines. One to look at your paperwork and another to pay. I quickly had Jacob run over to the pay line to hold our place.

I'm stressing at the time. It's now 10 minutes before we are supposed to leave our house for the temple and I'm still here at the soccer field stuck the pay line.

Jeff is calling me asking me where I was. I tried to tell the helpers I had to go, Could I mail my check in? That would cost an extra $40.00. She said "The line will go fast now that I'm here".

Ok that was a joke it crept along and it was now 5 minutes before I was supposed to leave my house. There was a good 20 or 30 minutes left in line. My mind is racing...all the sudden it occured to me to ask if I could have someone else pay for me. They said I could. I spotted Cheryl Kretz I gave her my place in line in exchange for her turning in my checks. Score!

We made it just in time for the temple session! 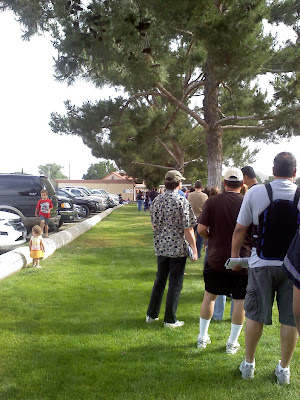 Jenise had this great idea to have us all over to her house for a swim party and BBQ to find out the sex of her first baby. Since we always get together for someone to open their mission call she thought it would be fun to get together to celebrate her big news. I thought it was a great!

(I had to try hard not laugh when Steve kept innocently calling it Jenise's Sex party.)

Her plan was to get the sonogram have the results in a sealed envelope, Tahna brought these results to the cake baker. She baked a cake with either pink or blue and none of us found out what the gender was until they cut the cake. What a cute idea! 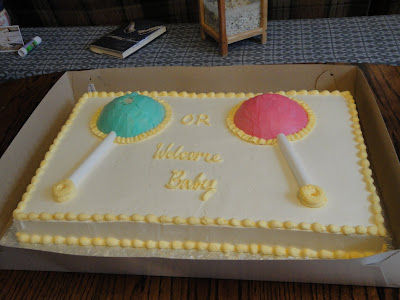 We started the party with some good food. (Steve and Tahna doing lots of hamburger flipping.) 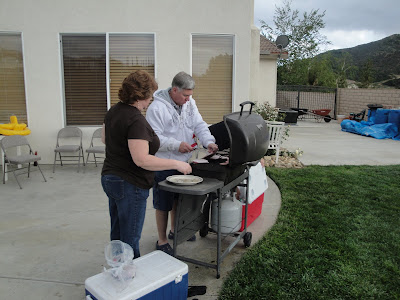 Pretty much only the kids were brave enough to hang out outside. It was cold up in Yucaipa! A lot colder than Riverside. 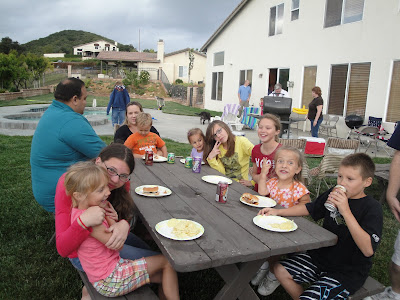 It didn't keep these guys out of the pool however. They had a blast. Crazy kids!

(They said the water was warmer than the air.) 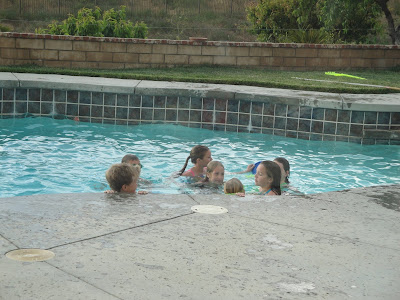 We also got to observe Jared's haircut. Hey grandma and Jared were at the same place so why not do a haircut.

The only disadvantage for doing a haircut at a family thing....you get comments about it from the whole family. Lots of people suggesting how it should look. Ha ha ha. 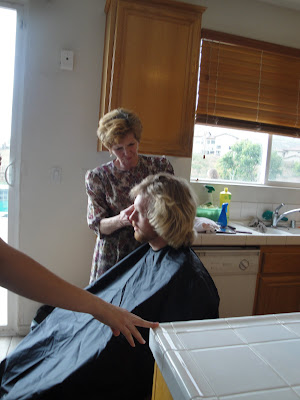 I think Jenise was worried about how many people would come. There ended up being a lot of us. Not just family from our side and Shawn's side but friends, and a couple of families that she babysat for. I think she was happy with the turn out. 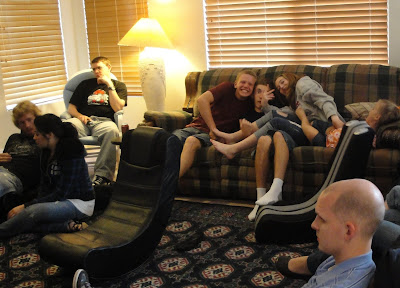 Of course the most exciting part was the cutting of the cake! It was the most anticipated cake cutting I've ever seen :) 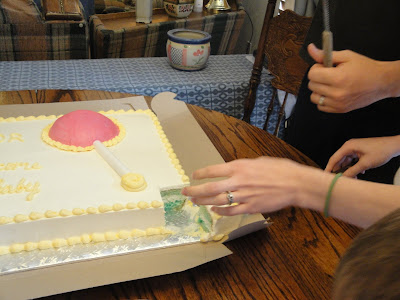 Whoo hooooo. IT'S A BOY! 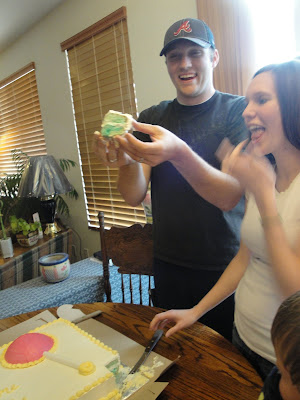 Monday I was set to chaperone at Jacob's end of the year skating party.

We've been skating before as a family at the roller rink but most of the kids there didn't know how to skate. It was so fun to watch them try. There was a lot of falling going on for awhile and nervous laughs as they hastily tried to get back up again.

I didn't see any serious injuries (suprisingly) but a lot of kids had a lot of fun.

Of course as a chaperone I am primarily a wallet...so Jacob can get things like Slurpies. 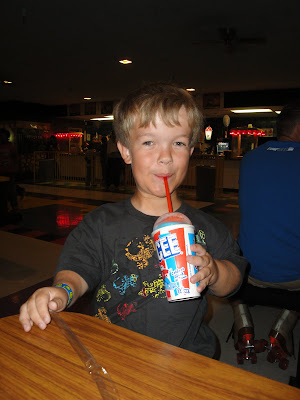 Actually he was really good and came and ate lunch with me and hung out some. 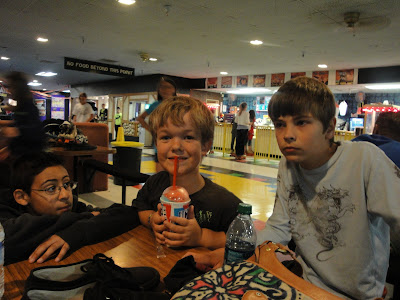 Most of the time he was out on the floor skating. He did great!

This was the wipeout game where they would tell you to wipeout and everyone would have to fall to the floor. He thought this was the most fun. 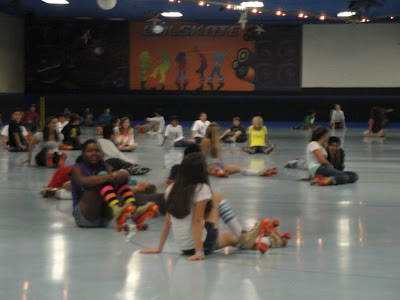 This was red light/green light. (looks like the same game :) 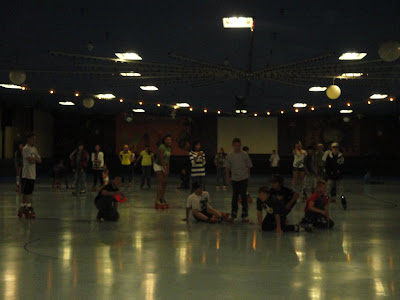 They all had fun and talked about it the whole way back to the school. And then they got to watch the family life video. 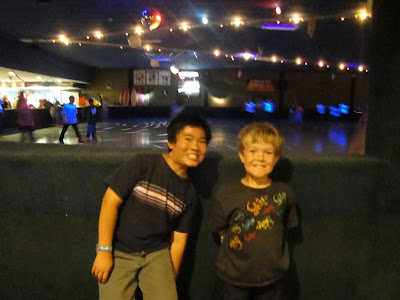 I asked Jacob how the family life video was.

Wow, you've been busy! I love the "sex" cake. What a great idea.

I love the gender reveal party- so fun!! Glad you were able to make the popcorn from the instructions. :)