For having a pretty boring Thanksgiving week things started picking up once the weekend rolled around.

On Thursday we hosted Jeff's family for Thanksgiving. It's always big, messy, loud and crowded but lots of fun too. After our count at the end of the day we had 42 brothers, sisters, grandparents, aunts and uncles, cousins and grandkids. Mix them all up and tell them to bring some food and voila you have our Thanksgiving celebration.

This year we had a new addition. Since we were having so many over we thought we'd make a second turkey, since we only have one oven Jeff got the idea of getting a turkey fryer. So after racing all over town the night before to find one and then racing back to the store on Thanksgiving day to get a missing part we were ready to fry our turkey. 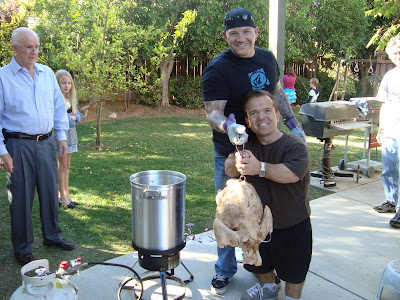 We've seen enough Funniest Home videos to know to be careful. Kenny did the honors of putting it in and Rueben and Robert hung out in the backyard to "watch" the fryer. After one hour...here were the results. 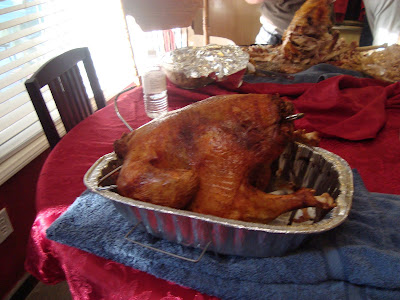 Not too bad but I have to say it was dryer than the oven roasted turkey and I would say in the future I would cook it less time. Though one hour to cook vs. 5 hours was pretty hard to beat.

Here is Cindy pulling out her famous potato rolls (she's the one who taught me how to make mine). They were in a box sealed with packing tape until we were ready to eat so there would still be some left by the time dinner was ready :)

(I've learned to include pre-dinner snacks in the food assignments) 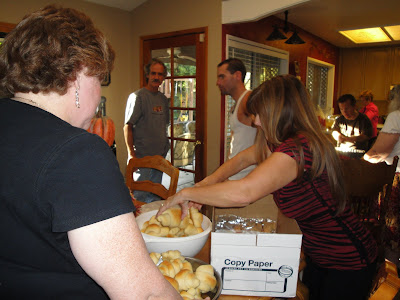 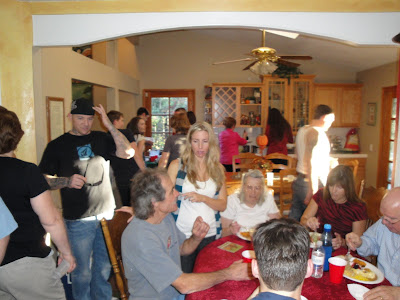 Yum. If you can notice the names written on the cups. These were supposed to insure that the owner of the cup would be able to return to their drink later. This isn't likely since the host has a habit of throwing cups away as soon as they are alone. Then when I let the host know that some people were complaining about their lost cups he left them alone. Well...sure enough at the end of the night there was a table covered abandoned cups full of drinks maybe the names didn't help :) 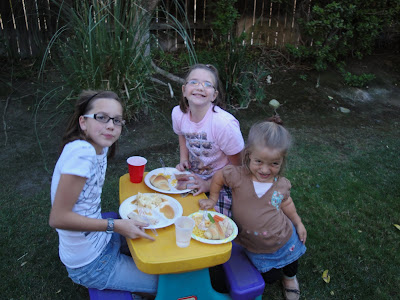 Luckily it was a beautiful day outside and we were able to sit a lot of people outside. 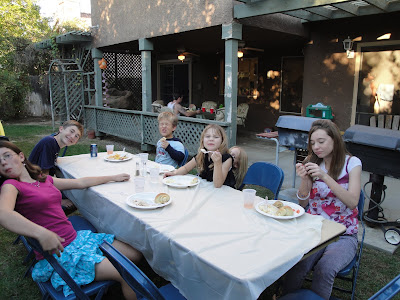 And after dinner what would a family celebration be without some video games. 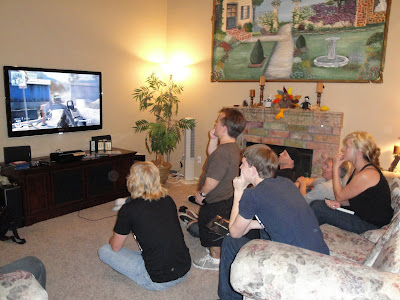 It's amazing how many people congregate when something exciting is going on :) 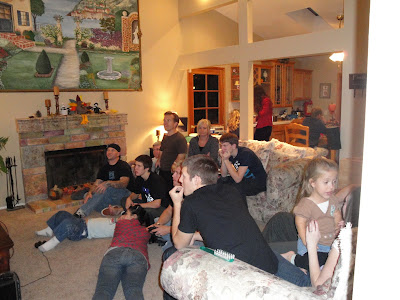 And to test the room capacity of our family room lets have as many people as we can come in to pose for a picture. (And this wasn't everybody) 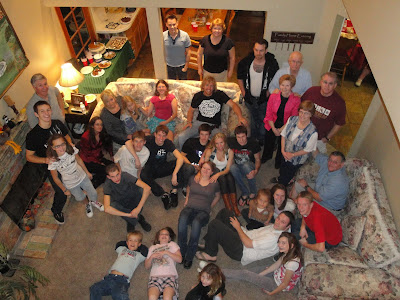 Probably our favorite part (over eating) was getting together and playing games. Steve started a rousing game of Murder and another group was in the kitchen playing Trivial Persuit. 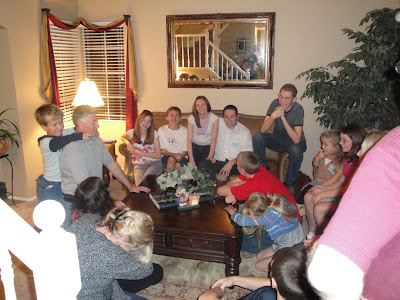 At the end of the day it was a lot of fun, tiring but fun. The kids were all still up late when the last of the family left and we sat around and talked about the day and just enjoyed being together.

Friday we skipped all the early morning Black Friday deals (not worth it) and took the kids skating and recovered from the day before. I admit it, I did go to a couple of stores but not until after 11:00 :) We spend the evening with Angela and Robert and had dinner and the boys bonded over video games while Angela and I got to talk.

Saturday we went to the Redlands temple to be with Ian and Josh as they took out their endowments for the first time. 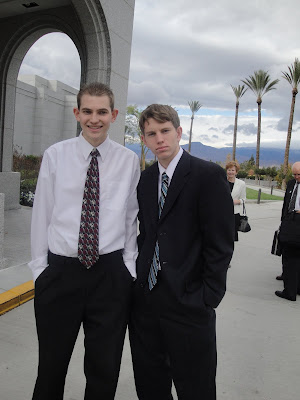 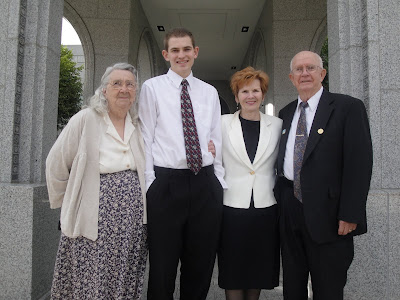 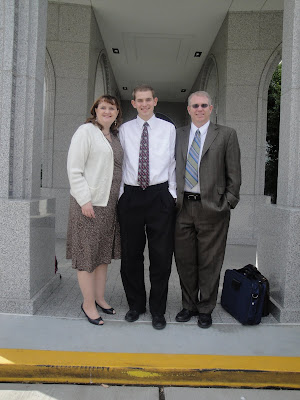 And proud parents and grandparents sending Josh to Balitmore, Maryland. 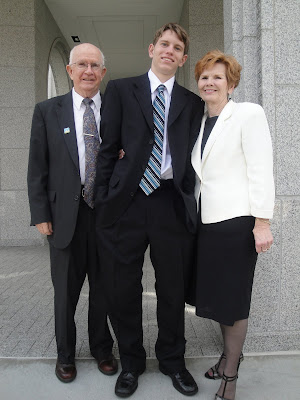 The temple was great, and even better because of all the friends and family that were there. 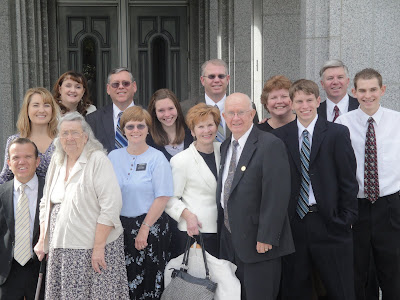 Of course we had to end it with lunch at chili's :) 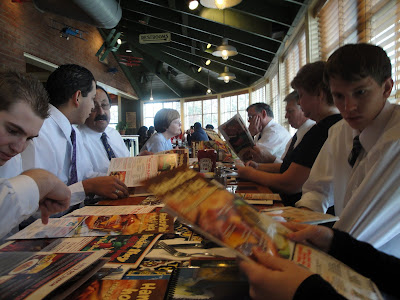 We ended up getting home at 5:00 with just enough light to pull out our Christmas stuff from the shed into the garage and hastily decorate since we were too beat to do it the day before.

Sunday we did church, chior and then went to celebrate with a Monica Bullock at her baptism and at the after baptism potluck. Lot of fun, so excited for her! Another late night for the kids and trouble getting them back on their school schedule.

Now it's off to officially start the Christmas craziness.

I have to say that part of me is sad to leave Thanksgiving behind. We spend a month feeling thankful for everything we have and then the next day we turn on a switch to get our children thinking about all the things they "want" (but don't need) to put on their Christmas list. I am sad to leave the "gratitude" feeling behind when I feel like we are forced to embrace a "gimme" feeling to replace it. Like I tell myself every year (but hope to stick to it this year) I really want to keep Christmas more simple and focus on the true meaning. We'll see if it works ;)
Posted by Christine at 12:56 PM

Looks like a great time. It must be nice to have all that family!