Ashley hiked up to Flat top with her Young Women's group 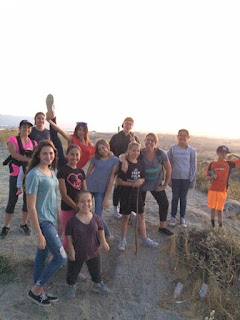 Here is Ashley's seminary class. She had a great teacher this year. 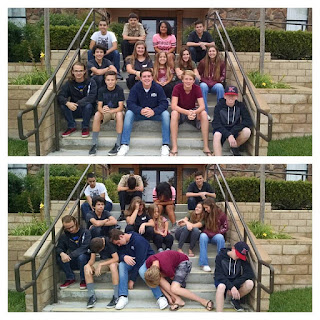 On May 1st Jeff and I celebrated our 24th Anniversary

Ashley celebrated by trying on my wedding dress and I was surprised that it fit her!! (If she could cut the sleeves and hem the bottom. It was eerie. 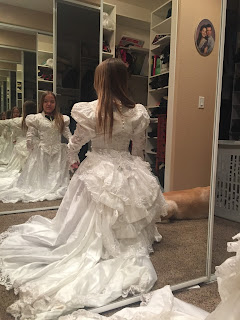 Ashley and Dad and I went back to Disneyland to meet up with Dale, Elsa, Liesl and Elsa's boyfriend. We found out that they were going to be there so we went after school and work and met them. It was pretty busy when we got there and we ended up waiting 2 hours in line for Toy Story!! crazy! The rest of the time we only did fastpass or short lines. 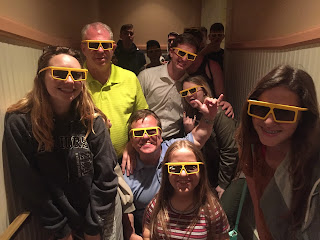 Our favorite ride was cars. It was the first time we had ridden it. 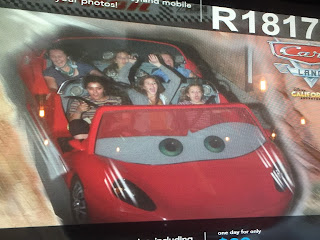 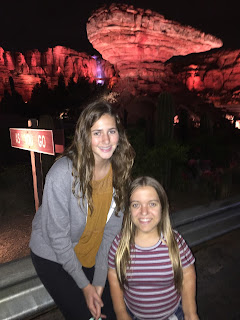 Clam chowder in a bread bowl. Yum! Our favorite. 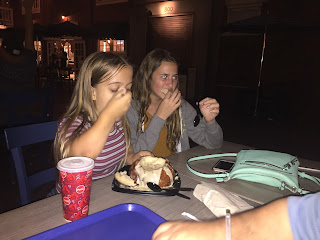 We stayed until it closed and then hit Jack in the Box on the way home with Dale. The picture of dad was Ashley laughing that dad pulled up a chair to get himself some coke at the machine. They had one of those machines where you could pick your flavor but he couldn't reach it. When the homeless people started coming into the Jack in the Box we thought it was time to go home. We got home at 2 in the morning. Way past our bedtime! We spent the next day pretty much just recovering. 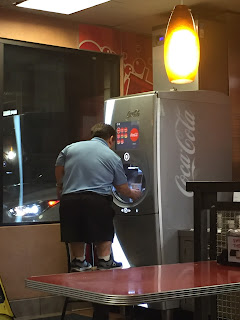 Taylor went up to a cabin with his running club friends and stayed in Big Bear and it snowed while they were there on the second day. They even had a bit of a snowball fight. The roads weren't too bad until he was driving through Arrowhead then he said it got sketchy. He skid a could of times a little and a car going really slow in front of him was making it hard to keep his traction and his wheels were spinning. Glad he made it home OK last night! The picture of Taylor hiking was the day before when there wasn't any snow. 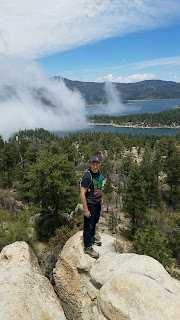 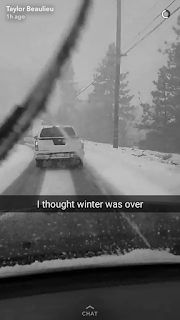 My highlight of Mother's Day was Jacob's phone call. The details are more on the blog post of Jacob's update for May. The flower Jeff got me for church and the cards were the ones I got that day including a hand written one from Jacob, which was the best! Mother's Day was good but quiet. We just had grandma, Dale and Elsa over and had dinner and played some games with them. 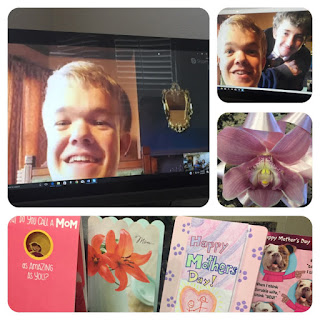 A close second for my favorite thing of Mother's Day was this pampering night hosted by the Young Women and performed by Ashley.

Ashley had a mutual night that was a mother/daughter pampering night. I loved it. Ashley had to give me a pedicure and you know she was trying to not think about having to do my feet and gross out but she did good. It was such a nice night. 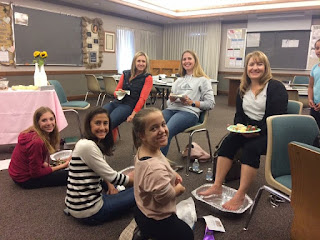 Ashley and her friends playing Mario Kart. They came over after school one of the days this week and they actually were doing personal progress. We have the rule that she can't get her license until she gets her medallion and Anna Hales has the same rule so they actually started trying to do some of it. After they were done they pulled out Mario Kart. Ha ha, whatever works. 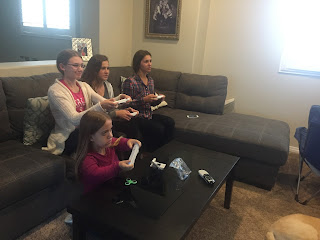 we went to Disneyland to celebrate Dean's birthday with him. We decided to play hooky one day and go before we are blocked out the rest of the summer. 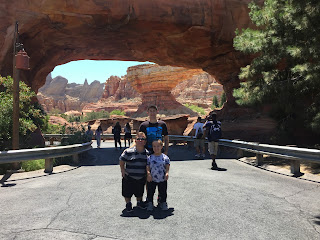 It was a busy day because I guess that people who had a special southern California pass had to use it by this week so the parking lot was closed by 10:30 and we had to park somewhere else, crazy. 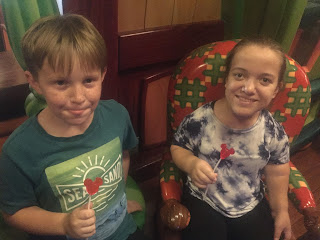 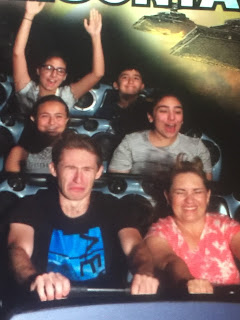 Dean seemed happy to have Ashley with him that day. 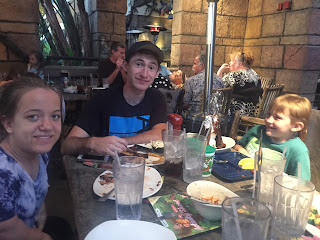 It was fun to celebrate his birthday with him! 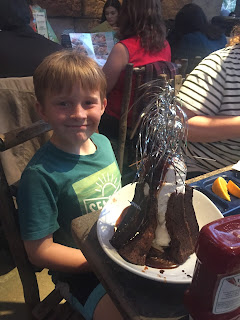 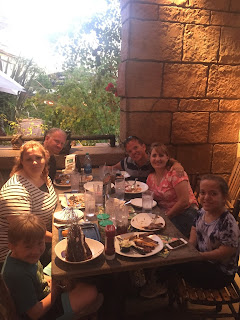 Ashley had the spring show for cheer. 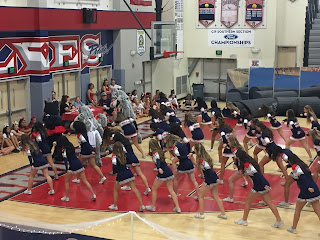 They did their performance they did for competition. It was a long show and we didn't get home until almost 10 at night (on a school night :) 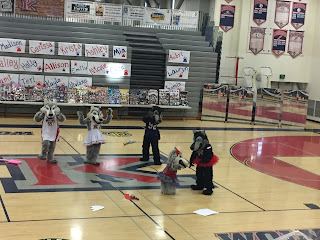 This picture is of Cody who opened his mission call. He is going to ......Honolulu Hawaii!! So exciting. He leaves at the end of September which is around the same time Jacob did. There were a lot of people there to watch him open it. So exciting. 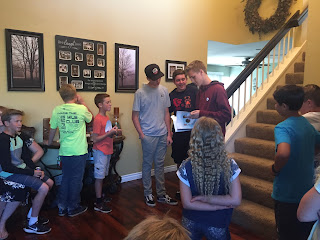 memorial Day and we are having Steve and Tahna's family over along with Jenise and the kids. We really didn't have any plans previously until Steve called and asked...."So what are you doing memorial day..." We knew he wanted to come over to swim, ha ha. We didn't mind and just made it our plans and it ended up being a fun day. 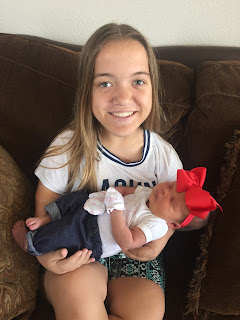 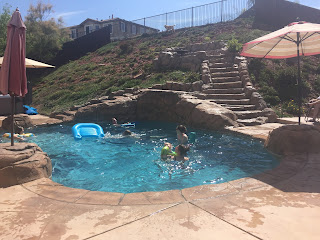 Making cotton candy for the kids... and himself. 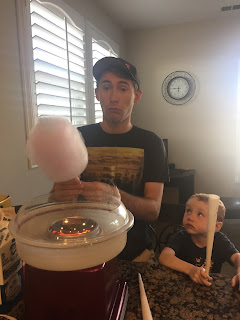 Ashley also gave a talk this week in sacrament meeting. She had to have every sentence perfect and she wanted to have help as she wrote it and she would re-read it over and over until it was perfect because she wanted to be able to read it from her paper from the stand. She did good though and she said she was less nervous and it was less stressful than doing a speech in Mr. Shauer's class.

Taylor left early in the morning on Saturday and we didn't see him until the next day because he didn't get home until long after we went to bed but he was up early with us to watch Ashley at church give his talk. He's been doing a lot of things with his running club friends and they went into LA on Saturday. I guess they went to an art museum and took pictures next to a pink wall, and went to the Griffith observatory.