The measure of how long it takes between post is the measure of how busy I am. I just got through a week that basically I took hour by hour...and I'm heading into another so I found a little bit of time on a Saturday where most everyone is still asleep so I can update this blog. (These pictures have been sitting here ready to go for over a week and 1/2)
So to celebrate Daren Gunnel making council this year (and last year) we took them to a nice dinner. Jeff works with Daren and brought him into the business. He is doing a great job!
We went to Ruth Chris, the best steak house! The food was excellent as always. 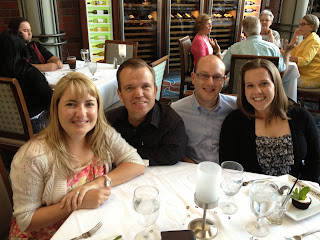 We were still in our anniversary month so Jeff decided to work it again ;)
He wanted to go here on our anniversary anyway and we picked somewhere else and his steak was a little disappointing so this time he got a good one. 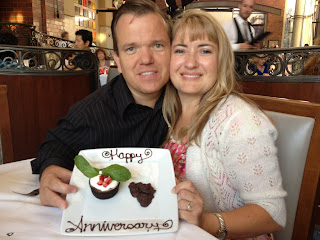 Afterward we drove down to Newport and took a walk on the pier. 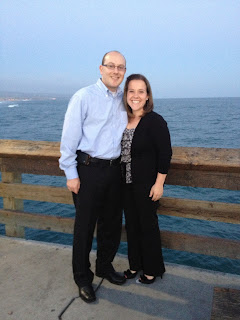 It was a nice night and a perfect day for a walk on the pier. 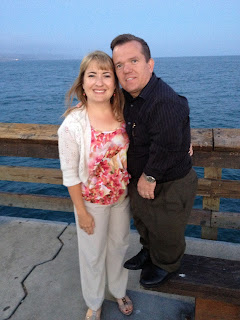 Memorial day and the kids are off of school and we have no plans. It seems like those school holidays seem to creep up on us and then we are scrambling to find something fun to do. We were going to just take the kids to Sky Zone trampoline park that day and maybe hit a movie or something when Steve and the kids called and wanted to go to Manhattan beach so we plotted a plan to do both.
Kelzey happened to be available that day so happily Taylor was able to invite her on our day long family outing.
The cousins at Sky Zone. 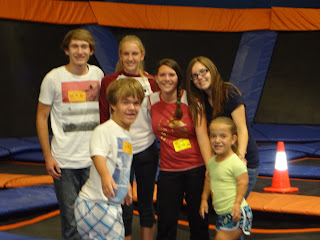 This place is wall to wall trampolines! 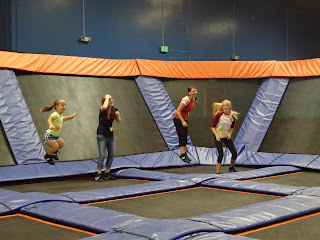 The foam pit is always a favorite 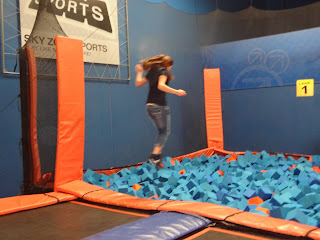 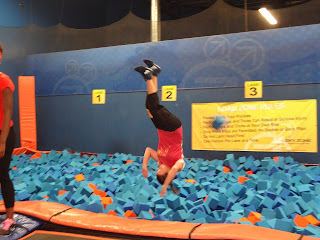 Jacob has a love/hate relationship with the foam pit since it's so stinkin hard for him to climb back out. He learned not to jump too far out into the foam. 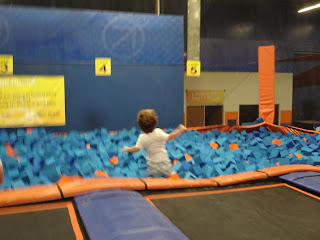 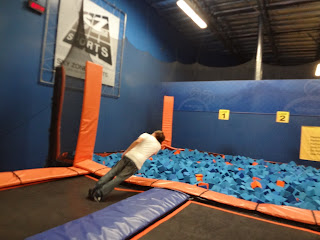 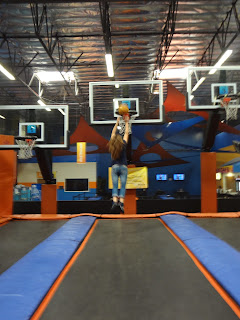 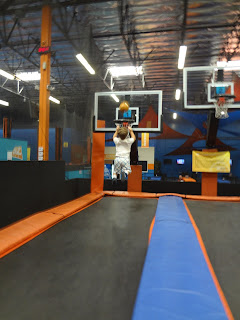 One of the other favorites is called 3D dodgeball where you play dodgeball on the trampolines. 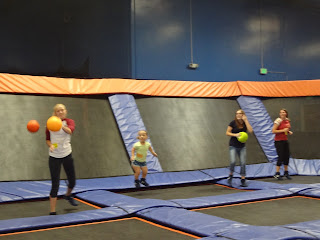 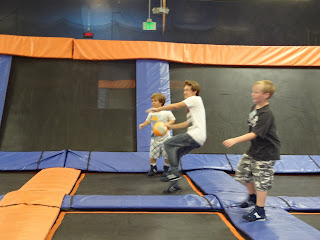 Afterwards we hit a Wendy's for lunch. It seems like all my kids are set on showing us what they are eating for lunch. 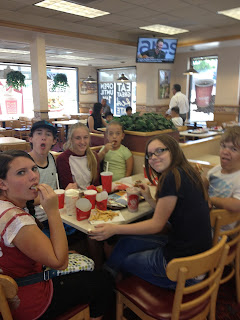 The next stop was Manhattan Beach. It was quite a drive with traffic. At least the traffic didn't get too bad until we got close to the beach, once we did though it was horrendous. It seem like a lot of people wanted to be at the beach that day.
It was a nice day for it and the weather was great. 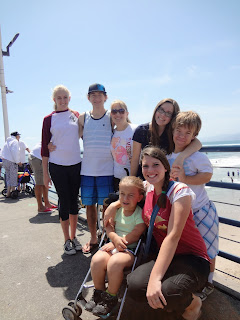 We weren't really planning to hang out in the water, good thing because the sand was packed. But we brought skate to use....after getting there and seeing the crowds we decided to save that for another day too. 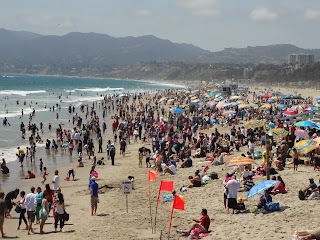 We walked on the pier and checked out the street performers and let the kids go on one of the rollercoasters. 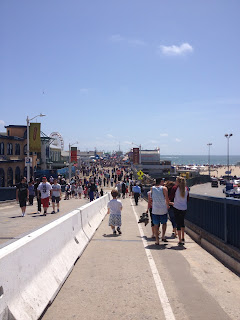 They went on this yellow one. One was enough because the lines were pretty long. Us adults were hanging out in the shade waiting for them. Since Ashley couldn't go we got her a funnel cake all to herself (until they came back of course) 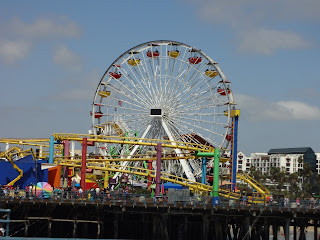 Since there were so many people there was a lot going on. I thought this was a nice tribute for memorial day. Kind of it was a protest and a demonstration of the American military members that are still being killed oversees. At least it was silent and a reminder of the holiday. It was much better than... 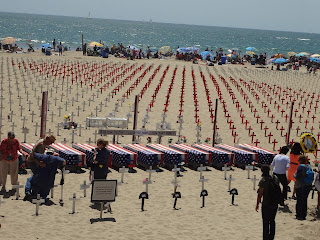 This guy in the orange prison jumpsuit carting a seven foot bible with Jesus Saves on his back.
The problem was as soon as you got anywhere near him and his posse it felt more like Jesus condemns, hates and will thrust you all in hell. This "ministry" was accompanied by a very loud bullhorn yelling a list of sins and people who are on the list to go to hell. One guy was standing behind a booth with the list in plain site, of course being Mormon we were on the list, nice to see the Methodists were going to be right there with us. "Drinkers, fornicators you are all going to hell!!!" Over and over. It was pretty bad. I think people like this give religion a bad name and it pushes people away. Christ was loving, kind and invites people to be better. What they were doing seemed to be the opposite.
As we were leaving the beach to go check out the outdoor mall these guys were moving their spectacle right along with us. As we were walking we had bullhorn guy in our ear yelling about the kinds of actions people shouldn't be doing until they are married. Very uncomfortable... 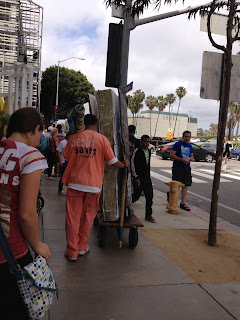 So we sat down and waited until they passed us by. 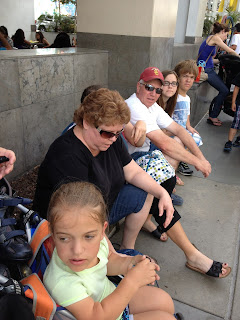 At the outdoor mall we saw more street performers of the much more uplifting kind.
Giant transformer guy and some pretty talented singers were fun to watch. 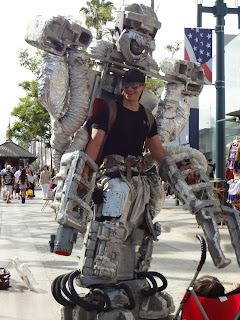 The area was pretty too. Here is a dinosaur fountain. There were lots of dogs, people and a festive spirit.
After walking around for a little while we were ready to head back home. We hit some dinner on the way back and then got home about 8:30 or so. 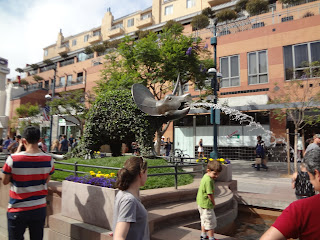 One more piece of good news. Ashley got the principals award this last week for improvement this year. Way to go Ashley. 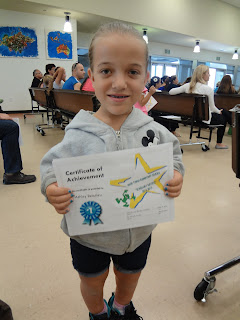 Posted by Christine at 7:37 AM

I want to go to that trampoline place! So cool. And I will be forever jealous that you live so close to the beach.