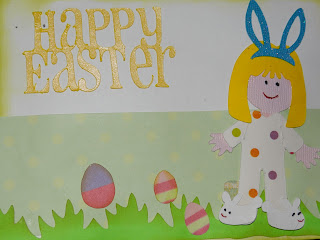 Hope everyone had a Happy Easter! I don't have any cute Easter family pictures...the morning ended up being crazy and the church clothes came off before Jeff was even home from his after church responsibilities so....this is our Easter picture.

(I am secretly very jealous of everyone else's cute dressed up perfect family Easter pictures. Maybe next year )

To back up a bit...the Friday before Easter we went to what started out as a get together to see my two nephews down from Oregon and to be introduced to Jarek's girlfriend. 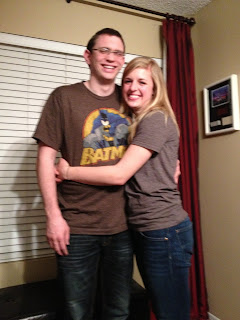 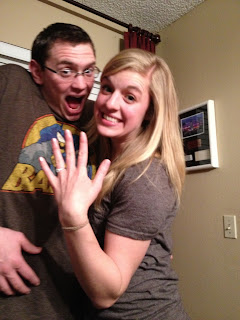 Here we are watching the video of Jared proposing at Disneyland with the help of a barbershop quartet. Very cute and a fun way to celebrate with both of the happy couples.

I have fond memories of going to BYU with two of my cousins. We all ended up getting married within a few months of each other and it makes it a lot of fun. 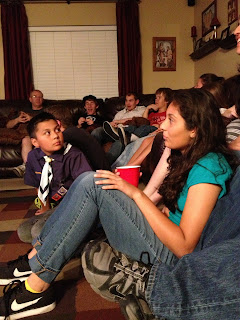 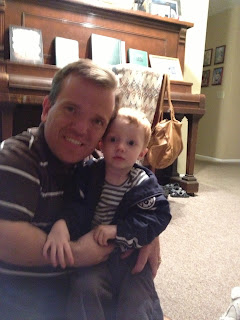 The next morning I was up early cooking for our annual ward Easter Egg hunt and brunch in the park. It was well attended and even graced by Brayden Bagley dressed up in a pink bunny suit. 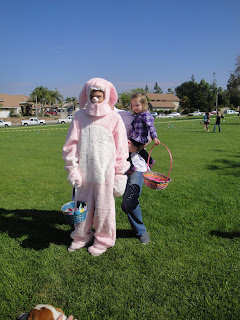 There were tons of eggs and candy and even boxes of peeps out for the kids to pick up. 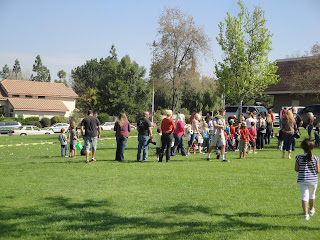 Everyone got plenty and I even had a couple of neighbors come out and enjoy the party with us. 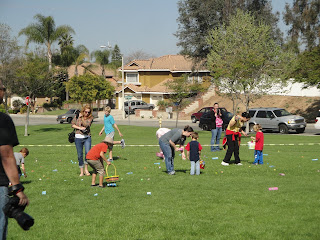 Thanks to some donations from a charity group that had leftovers we also had a prize table for the kids. We took an idea from our LPA parties and put a ticket in eggs and they could redeem their ticket for prizes. It was a big hit. 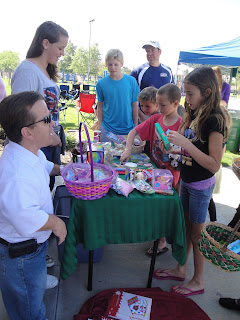 That night we went with a couple of families to Ferrells for ice cream to celebrate their daughter's birthday. Maia got the coveted giant balloon hat.

I remember Ferrells from when I was growing up. It went out of business and now that a new one opened up its very popular with lines wrapped around with people waiting to come in.

It was a very fun, and loud experience. I have to say the servers have to have a lot of personality, energy and vocal chords of steel. 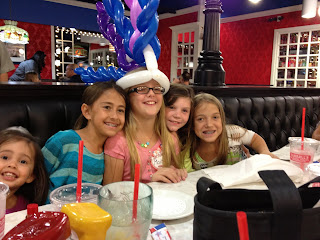 Sunday morning I set out my well thought out Christ centered Easter baskets with scriptures and quotes about the atonement and Christ's mission attached to all the contents.

It went downhill from there.

I woke up and came downstairs to find that Ashley's "pet" slug had escaped in the middle of the night. It needed to be found before everyone else came over later that day!

As we were getting dressed I realized my brand new pumps I bought didn't really fit. They were too big...back in the box and I had to put on my old ones with the strap that is ready to break at any minute :(

Then we realized that Jacob didn't have any church clothes! He had brought his suit and church shoes to school to do a play in his classroom...and left them at school.

It's 1/2 hour before church and he doesn't have anything to wear on Easter Sunday. Really! You couldn't have told me this the day before so we could've done something about it!?

So he ended up wearing Jeff's too big shoes and we found an old pair of Taylor's slacks in the closet that I am now hemming right before we are trying to get out the door.

Ashley's 1/2 off black nail polish didn't get off, my make up barely got on and forget about breakfast.

When we got home I found candy remnants from their baskets I asked "did you read the tags on the candy" I got silence in return. So much for an ideal Easter....everyone's perfect family Easter photos on facebook just accentuated that fact. 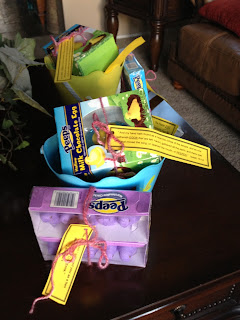 I spent the rest of the afternoon getting ready for an Easter gathering with Steve and Tahna's family and at the last minute Angela and Robert!

I was in church and thought about Angela and her spring break. I texted her and sure enough she had been in San Diego all week and they were driving back home. We are pretty much on their way home so they ended up coming over as I was getting ready for dinner and hanging out with us for awhile. 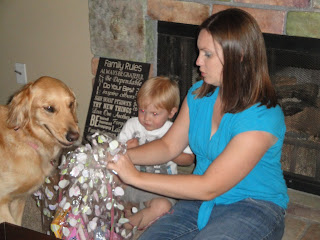 and the trampoline with Ashley.

The last time he was over he didn't like the trampoline but this time he seemed to like it a lot more. 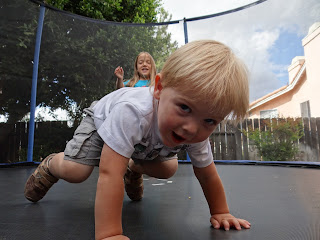 We enjoyed lots of food and visiting with family. The kids were pretty quiet upstairs... Jeff snuck up to see why.... 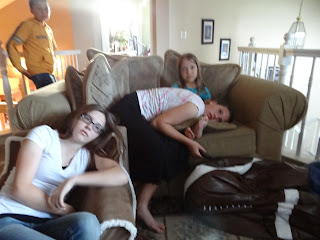 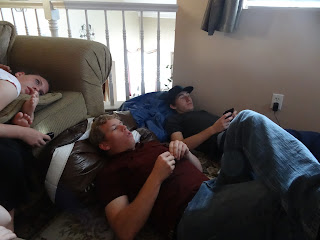 So thats why they were so quiet. 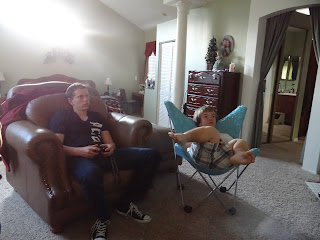 The first day of spring break Taylor was invited to go to Knotts with Kelsey and her family and friends. They ended up having quite a group and he had a lot of fun! The Cowdens were very brave and generous to take all of them! 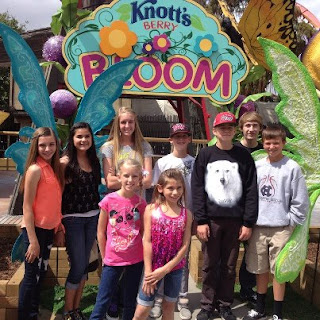 Taylor and Kelsey recently have opened up and have let us know as parents that they like each other. Since Kelsey isn't 16 yet they have been allowed to have supervised time together with each other's families.

Since Kelsey and Taylor are both our oldest child this is all new for us. 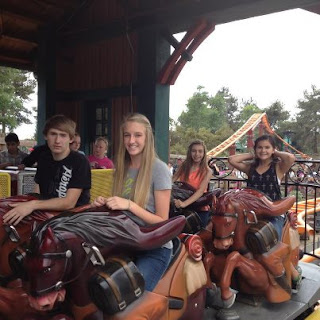 The rest of us didn't have such a fun first day of Spring Break....this was it...laundry. Jacob stayed in pjs the whole day and didn't go anywhere.

Ashley ended up going to a friends late in the day...but other than drive her to her friends...all I did was laundry and clean the house. 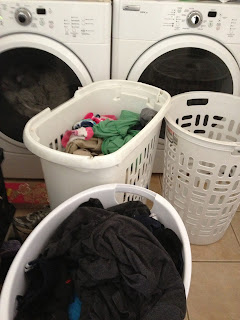 The next two days haven't been much better.

The kids are much harder to rally to get out of the house and do anything. A huge group went to the beach yesterday...did my kids want to go? No. They said they'll go in the summer. Everyone went to the beach had a great time. We were home. Again.

So we worked on Jacob's plant project and I did boring errands and more house cleaning stuff. 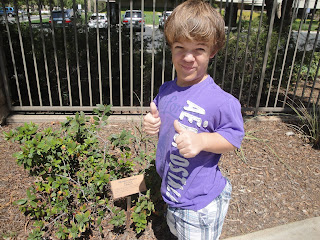 Last night we finally took the kids out and went to the drive in.

Jacob wanted to hang out on the roof of the car.  That lasted less than 10 minutes. He realized how uncomfortable it was. 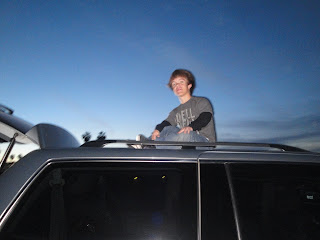 We brought Kelsey with the family to the movies. 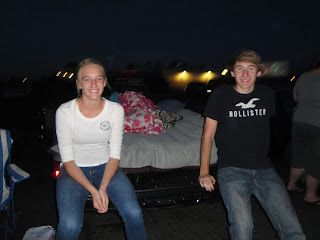 All the kids were watching the movies in the back of the truck. Jeff and I were in the van but we didn't stay there long...we kept checking on the kids and couldn't relax and ended up sitting in chairs right next to them. 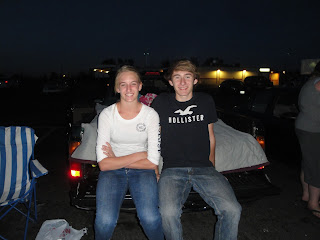 Posted by Christine at 1:12 PM

Wowza, having little kids is so different than having teenagers. I'm going to have to prepare myself for that one. Lydie is bursting to get outside at all times. I've thought to myself a few times how nice it would be if she could entertain herself in the house for awhile. I guess every age comes with it's joys and trials. I love the pictures of Taylor and Kelsey...they look like they're afraid to touch each other, ha ha!

Even though my husband posted pics of nicely dressed Easter outfits, I had a slight melt down on the way to family dinner bc our morning hasn't been purposeful enough. You are a great mom! Did you find the Easter basket stuff online or make it up? Just remember the nice photo always leaves out all the other difficult moments of the day:)

Christine, you sure have lucky kids who have you as a mom! I am so impressed you got a kid without clothes to church. That's more important than pictures :)