Memorial weekend started out with a teen scary movie night.

One of Taylor's friends from seminary started talking about scary movies...then Taylor said "you haven't seen scary until you've seen Woman in Black" and then the movie night was on. We saw the movie as a family and it was suspenseful but not too bad...perfect to make friends jump in the night without grossing anyone out so we knew it would be a good one for them.

Taylor texted a couple of people and told them to spread the word and we ended up with a crew of teens to eat snacks and snuggle up watching the movie. I was in the back in the other room watching it and the most entertaining part to me was the screams and jumps from the kids. We had the back window open so it was cold too. The TV messed up at this part so while Jeff is fixing it everyone crammed together to watch the end of the movie and of course I had to sneak a picture in. 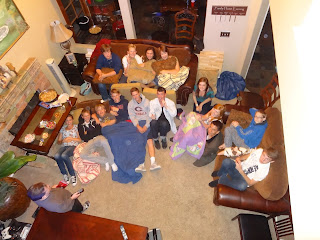 Monday was a fun family day with extended family visiting Yucaipa Regional Park. I told Ashley that she could invite her friend Jenna and lucky for both of them she was available to come with us. Both girls were so happy. (It's helpful to borrow a sister for Ashley sometimes since we don't have one for her) 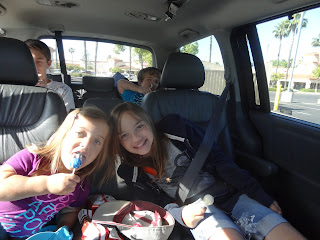 Sure the chair is big enough for two. Caden was fun to play ball with and hang out with the girls. 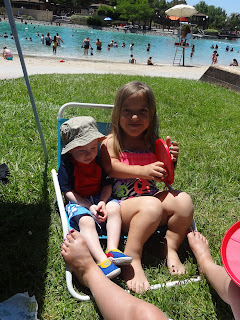 We hung out at the swimming area that day. The air was warm but the water was COLD so not a whole lot of swimming. Just a dip here and there and playing in the sand.

There are two water-slides there and the kids insisted that they would really go on them enough to justify wristbands. So Jeff bought wristbands...they would have to go on them 5 times to make it pay for itself...I think the record was 3 times. I think the water was too cold for them. But it didn't matter we had a great day otherwise. 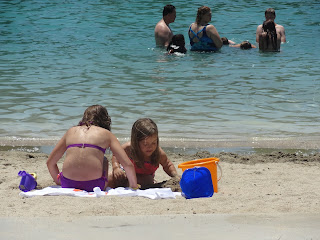 We spread out our EZ-ups and hung out and ate our lunches and snacks. 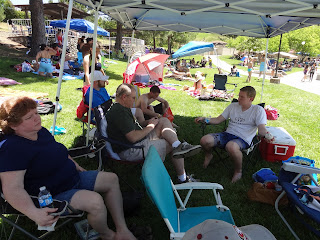 A little later in the afternoon we went over to the other side of the lake and rented paddleboats. (you can see Caden is ready to go too) 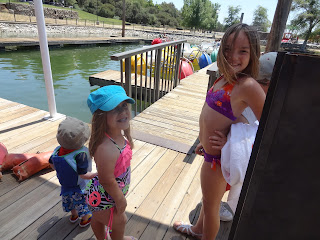 We had to wait in a line for people to come back with the paddleboats...since there was a lot of us we kind of had to wait a long time. We asked the worker girl how many boats there were so we could get a better idea of how long the wait was "Ooohhh I don't know"  I thought it was weird that she didn't know.

Things were moving so slow Jeff jumped in and started helping her. He was loading people on and off the boats, getting the line moving. It was hilarious. Finally boats came in and we started loading up. 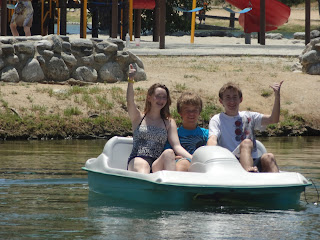 Jeff didn't go on a boat but ended up helping the worker girls the whole time! 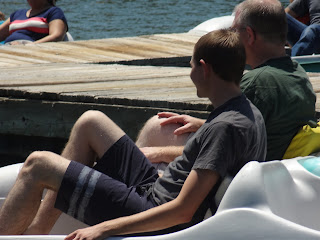 I found out quickly how hard it is to paddle these by yourself. Jenna tried to help but her feet kept slipping off the pedals and when they were on I think she was just letting them go around with the pedal and not really pushing. I could tell because I couple of times we had to escape splashing from Taylor's boat and then I could feel her really pedaling and it was a big difference.

When we were done my legs were burning. I asked Jenna if her legs hurt at all "No they're fine" Hmmmmm. 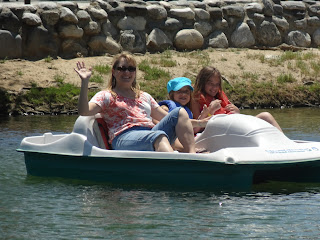 We ended up using all the boats the place had. You couldn't tell until we got out onto the lake how many boats there ware. There were 4 boats....I'm not sure why the worker girl didn't know that there were 4, it's not like there were 34. 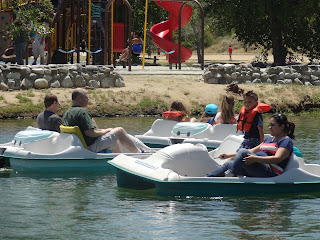 Even Caden got to go. I wondered if he would be excited to go on the boat...he was pretty chill the whole time. 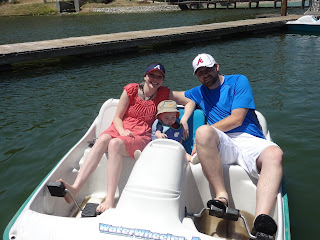 Dad splurging for icees....nice hot day for them. 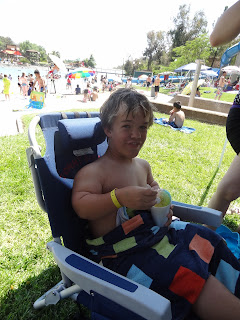 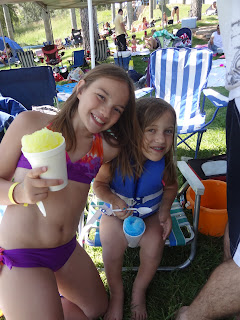 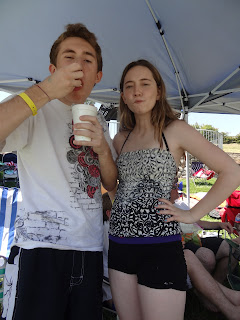 Cheri and Ryan got there a little later in the day. We were happy to have them and see baby Violet again. What a cute family. 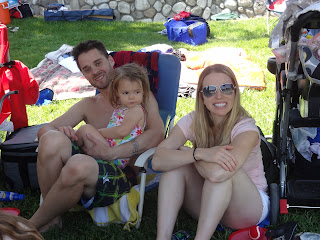 And this cute family finally got their baby to sleep. He was needing a nap almost from the time they got there, but too much going on so he wasn't able to get to sleep...until after the boat ride. ;) 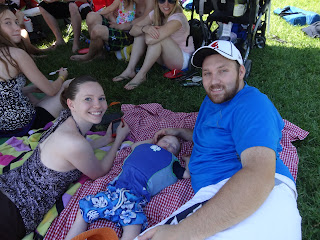 All in all it was a very fun day with family. Thanks Steve again for planning a fun family day. 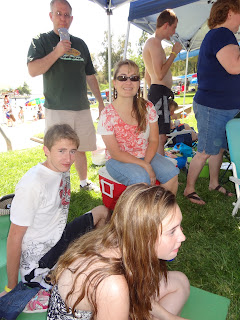 The next day it was hard for the kids to want to go to school. They said with the hot weather and swimming the day before it felt like summer...and they were ready for it to be summer. They still have 2 weeks left though after Memorial Day.

Jacob's backpack is even done. He came home telling me it's broken...well the whole front pocket won't zip up. I tried to see what I could do and I noticed he tried to tape it and staple it. Didn't work...ha ha. 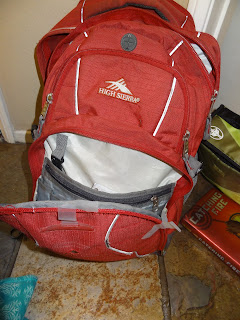 Friday Ashley had her school play. It was a 4th grade production on the westward expansion.

I love these school plays that teach the students the curriculum while they are singing fun, silly songs and acting out life cycles or history making it real for them. 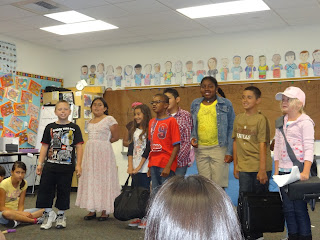 So Ashley's part is the "delivery girl" and she keeps coming to seddlers, Indians and sod busters and such trying to deliver packages without success.

She had a lot of lines and did great with her part!

Here she's sitting on a bowling ball that nobody wanted to take from her. 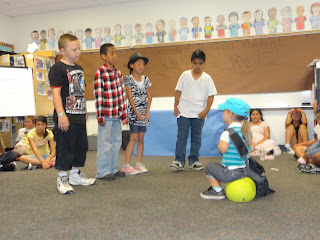 I have a package here!!! (Her mail bag as almost as big as her!) 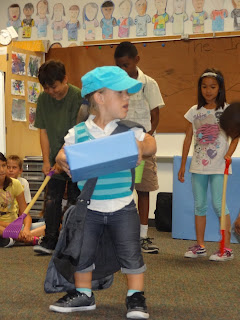 Her last package was supposed to be the golden spike to join the transcontinental railroads together in Promontory point, Utah. 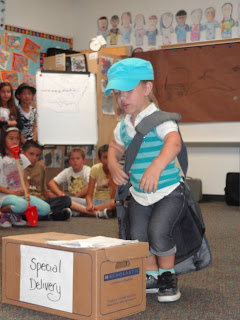 For this last one she needed the script...lots of big words....like transcontinental and Promontory...instead of a golden spike she opens her box and it's a golden bowling ball. So she decides to head out west...quick. 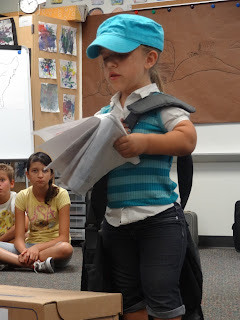 One more week of school left. We all can't wait!

Posted by Christine at 7:31 AM