This Saturday was Jeff's yearly kick-off dinner and awards meeting. Every year we go but only a couple of times have we actually stayed at the hotel where it was being hosted.

This year it was in Palm Springs so we thought we'd take the family and have fun for the day and then go to our event that night.

We decided to take the kids on the Palm Springs Aerial Tram.

It's been years since I've been there and the kids have never gone. 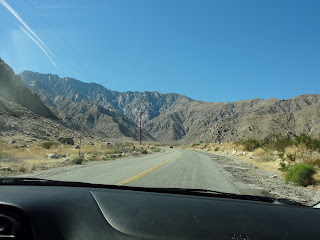 The day was cool but not windy which was perfect.

I heard about some hikers getting stuck overnight at the top a couple of weeks ago because they closed the tram early due to wind....I didn't tell the kids about that one ;) 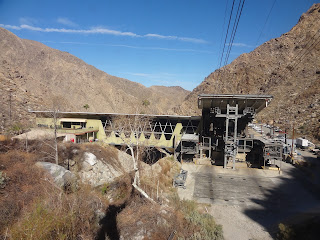 Waiting to get on. We all brought gloves and jackets because we knew it would be a lot colder at the top. Ashley was wearing long sleeves and had me carrying a sweatshirt, jacket, scarf, gloves and hat....luckily she let me leave her snow pants in the car! 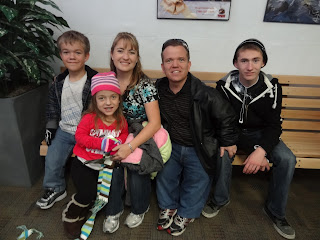 The price has gone up quite a bit since the last time I've been there but I guess they've changed the car, it's bigger and rotates as you go up so you get a view from all sides. 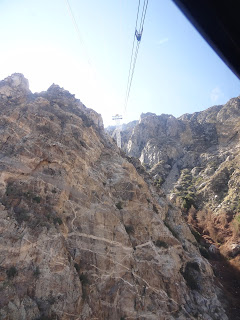 and a long way down!

We figured well if we fall, we die...we tried not to think about it (hee hee). 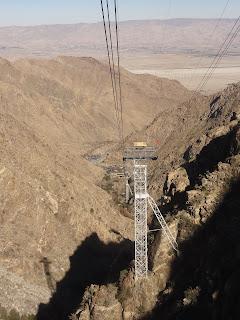 Great view at the top. 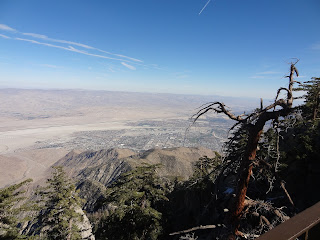 At the top with Ashley bundled up like a snowman....it was cold but not thaaat cold...she shed her jacket pretty quick and guess who got to hold it. 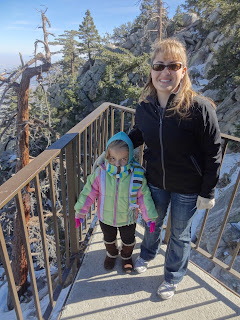 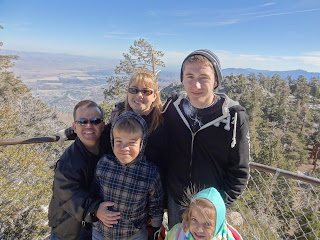 There was frozen snow at the top. It wasn't fresh enough to play in it but it was frozen enough to skate on it.

At first Jeff was telling the kids to "get off of it" and "be careful you're going to fall"....then I said "so what if they fall" It was flat and they were having fun. He realized it wasn't a big deal but he remembered running and sliding on ice when he was young and cracking his head on it. No one fell but there was no running and sliding either :) 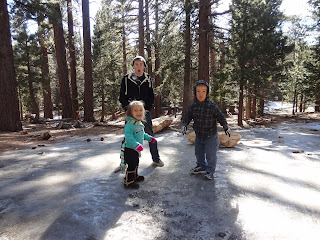 Taylor and I hiked a bit farther than the rest of the family to see a couple of the lookout spots. Taylor loves "bouldering" he calls it....basically just climbing up boulders. 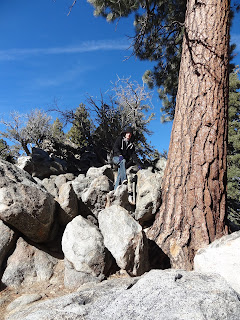 At the second lookout he wanted to climb higher to get a better view...thats him the little dot on top of the rock in the distance. 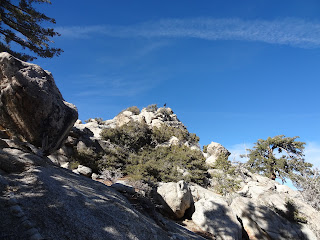 You can see him a little better here but he's crouched down. When he got to the edge he realized how far it dropped off  he said it was pretty sketchy. 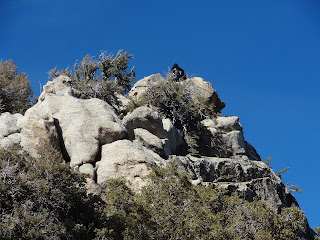 Ashley ready to go back down and hit the hotel. 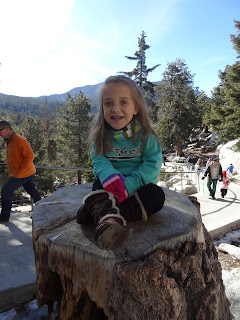 The trip back down was uneventful until about 1/2 down...then Taylor started having problems with his sinuses and felt like his teeth were going to fall out and his eye pop out.

We gave Jacob a benadryl before we went up because his ears have been plugged from a cold, but Taylor's ears were fine but his sinuses gave him a lot of trouble. Crazy...we came down and after a couple of Benadryl for him and some time he seemed to be better. 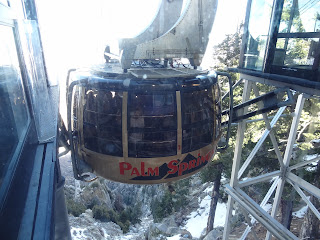 That night Jeff and I dressed up for his black tie, masquerade dinner. I've had this outfit for a number of years and I wear it over and over to his formal stuff.

Right before we are walking out the door I bent over to get something and the zipper up the back of my shirt completely popped open. I guess I wore it one too many times.

The pizza guy for the kids came just as this happened so I took pizzas and paid him without turning around and then frantically tried to see what I could do to fix it.

I got the zipper aligned and back together but the whole night I sat up straight and made sure not to pull on it.  Wheeeeew I was just glad to get through the night intact. I guess it's time to get something else now. 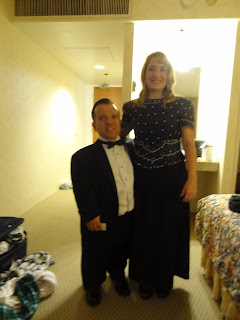 Our flash on the camera died (just add it to the list of broken things around here) so we got this one blurry picture of the Parkers, the Gunnells were there too and it was nice to hang out with them. 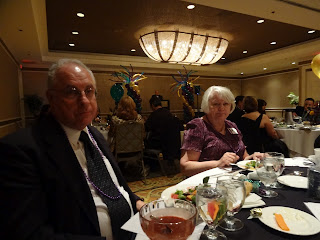 Oh I almost forgot the emcee was giving away the centerpieces that were on the tables. The people that won them had to have the item that he called out....like 12 credit cards in your wallet....wearing a Rolex watch (not us)...have a picture of  your mother-in-law. It was like a scavenger hunt...but we didn't have our wallets or purses so we didn't have any of the stuff he was asking for.

Finally its the very last center piece and the guy asks for anyone that has anything Disney.

It caught him off guard, everyone laughed, and Jeff got the last centerpiece. 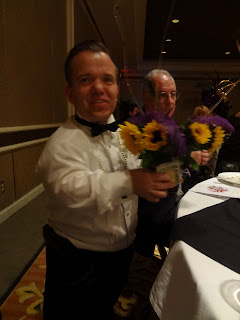 He also was called up 4 times to receive awards including top 5 in the office.

For years we used to come to these parties and watch everyone else get awards...now it's nice for me to come and see Jeff get them. All that hard work paying off! 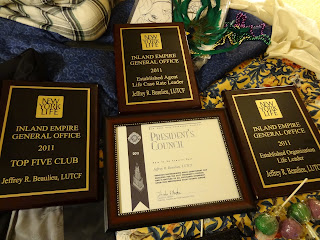 Having 5 people and 2 beds ends up with a dilemma every time in hotels. Ashley has been relegated to sleeping at the foot of our bed.  It works pretty good as long as the beds are about a queen size....these weren't queens.

She woke up early in the morning with her head 1/2 off the bed and complaining of a head ache, I let her come up in between us...you can see how much room that left Jeff and I ;) 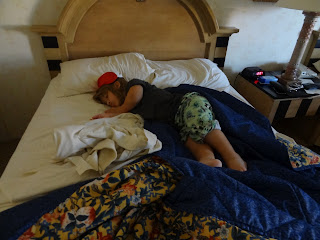 Posted by Christine at 1:21 PM

How fun Christine! I love the 7 dwarf comment, Jeff is a crack up. Huge kudos to you for being able to fit into the same dress for that many years...SWEET!!! Miss ya!

Congratulations to Jeff for all those awards!

I love Jeff's way to get a centerpiece! "Having" to go shopping isn't all bad, right?

Congratulations to your husband on his awards! Your Ashley was so cute all bundled up. I would have done the same thing--I don't like to be cold. :)

Congrats on all the awards. You looked so pretty for the dinner. i hate that i have to learn of your happenings through the blog and not in person on our hikes. Soon enough though soon enough. In no time we will be back on the trail...miles and magnus are super excited to get out.

You deserve a new dress! Look at all the money you have saved by wearing the same one for ......how many years?????