As our World turns

This last weekend was conference weekend. We had nothing going on Saturday other than sitting around watching conference. I pulled out my beading stuff and enjoyed listening to the talks.

The boys went to Priesthood session and Ashley and I hung out that night. The next day the kids joined us for conference and were told to take notes. We always have a conference trivia game the Family Night after Conference so I ended up with lots of notes. 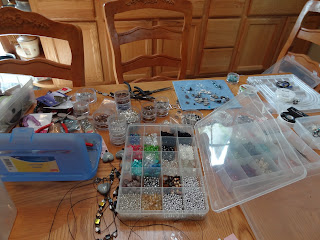 So the reader's digest version of my notes and a couple of my of my favorite quotes from conference....

Jacob miserably failed last conference, not only did he not take notes it seemed like he hadn't paid attention at all and basically couldn't answer any of the questions.

So I think he learned his lesson and took lots of notes .... on my Ipod. I have to say he had word for word answers on some of his questions and he did really well at the trivia game and won two things from the big box....I think he rose the bar for the other two kids for next time. 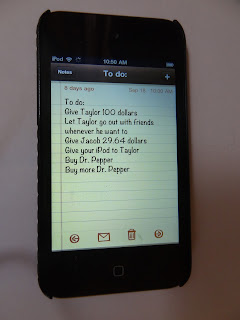 And in other news in Jacob's world... 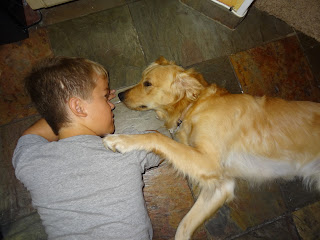 He is pretty much getting straight A's ....

He has started brushing Maddie every day...(not for very long or very thoroughly but Maddie and him like it)

When he's done with his stuff for the day he spends almost every day playing Toon Town with Jacob Rosser...they started playing it in the summer together. They will sit on the phone with each other on speaker phone just playing the game and talking to each other. It's hilarious to watch and keeps them both occupied...but I end up with a bunch of messages afterwards from all the people that can't get a call through. 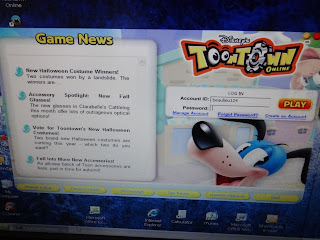 Also Jacob is the best piano practicer in the house right now...he is good about doing it first thing after they are done with their after school break....(probably because it means it will allow him to put off his homework longer) 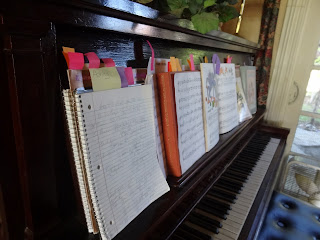 In Ashley's World this Week...

Ashley had activity day this week and got to paint her nails by herself...she came home with blue and green fingernails and silver and blue toenails.

Ashley had a birthday party for a friend at a skating rink. They were all impressed with her skating skills I guess she was even brave enough to show them how to skate backwards.

Ashley is my helper at all of Maddie's dog training classes.

Ashley's braces are working. Her teeth still don't touch in the front but they officially now come together enough that for the first time in her life...

she can eat an apple whole! 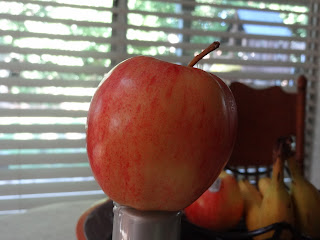 Ashley got to come shopping with me a couple of times, she begged and got a couple of pre-halloween stuff for a dollar each....here is some trick gum that snaps a fake bug on you when you pull it out...nice... 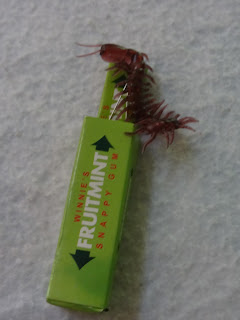 And some skeleton goo....Hey what's it doing on the couch! 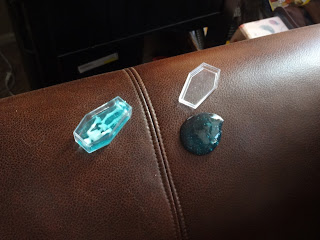 And in Taylor's World...

We got some answers on his leg....well kind of sort of...a little bit...with some more waiting.

He is still in pain and after 3 weeks he still needs crutches. (He tried to go yesterday without them and by the end of the day of limping on it he was in a lot of pain)

We did find out that the injury that nobody could figure out last year during track season was actually a stress fracture in his hip!

This is the injury that the first sports clinic girl told me "he's not in as much pain as he thinks he is", the other sports clinic people said he had tight muscles, the doctor that finally ordered the xray for it only checked the bottom part of his legs, and the orthopedic dr we were sent to said "he has tight hamstrings, stretch them 200 times a day and he'll be fine"....wrong....all of them were wrong.

Stress fracture of the hip found out months after the fact as they were trying to check whats wrong with him now....so now we're thinking that this might be the same thing on the other side though this has been a lot worse.

His current injury didn't show up on an initial x-ray...which is typical so we were referred to a different orthopedic doctor....(more time out of school) 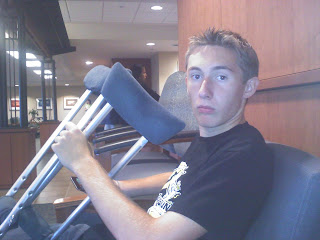 This orthopedic doctor ordered an MRI to get it checked out and said "no running on it"  Yeah....pretty much that's a given since he can't WALK on it.

So he said "you should hear from them in about a week to schedule the MRI"  I'm looking at him and he says "Oh there pretty good at getting MRI's within 3 weeks or so, then schedule an appointment with me a few days afterwards". Seriously?

I didn't say anything but I think he knew I was thinking it would be nice to know whats going on with his leg sooner than A MONTH from now!  He then told me "It's not like he's dying or anything" well thats true "and he's not going to do anything different than he would've otherwise. Don't run on it and keep using crutches."  He had a point but it was still frustrating to know it would be weeks before we got to the next step.

The real issue is why is an otherwise healthy 15 year old getting hip stress fractures?? I talked to the coach and he said he's never had problems with this with his other athletes.  Our pediatrician did bloodwork on him thinking it could be his Vitaman D or Calcium levels, or even a genetic collagen problem, or a mild case of brittle bones disease (that one was disheartening). The bloodwork came back within the normal range...so the question still is...is it another hip fracture??? and if so why does he keep getting them when nobody else does???

So I guess we should hopefully know the first answer in another month from now...pretty much about the time he should already be healed.

(Ipods loaded with games are invaluable with long doctor's appointments) 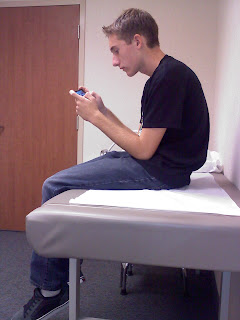 Also in Taylor's world in a lighter note...he got lots of friend time this weekend. He hung out with friends, went to KFC and the Homecoming football game and had a hang out night...this is after last weekend of being grounded.

(We have found out that giving consequences of no friend time until all missing assignments at school are taken care of is a great incentive.)

And in Maddie's World 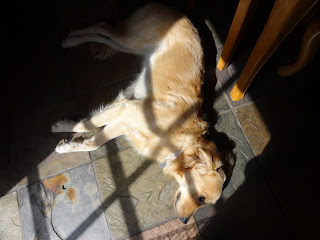 She was restless last week when it was raining and she couldn't get the exercise she needed.  She was happy today when she got to go on a hike with Magnus again.

When I left her outside to go to the store the rain storm started. I was only gone for an hour but she was sooooo wet and muddy she immediately had to go upstairs and take a bath.

Here's a preview of her Halloween costume (dollar store wings) She turned around as soon as they were on and started biting them...this might be a 5 minute costume....good thing it was only a dollar. 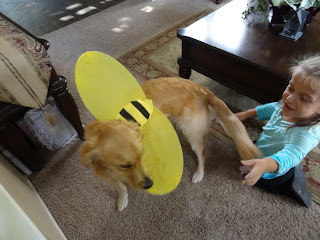 I've given up trying to save Maddie's puppy blanket from herself. It now has a few large holes in it ...here's her looking like little red riding hood running through the house catching balls with it over her head. 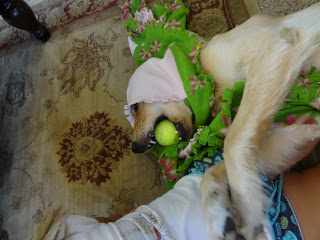 An in our family World

I was saved from cooking Sunday dinner two weeks in a row!  The Stubbs invited us to dinner  just as I was about to start cooking. Their dinner guests cancelled on them and so they needed someone to come eat their food!

We were happy to oblige. 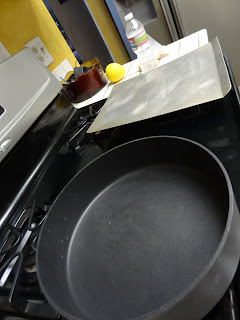 This week we were invited to Sunday dinner with Grandma and Grandpa Nelson.

Jeff was supposed to speak in her ward and when it didn't work out we thought it would be good to get together with them anyways. We had a great dinner and a fun time visiting with them and playing a game!

Fun times and a great meal. 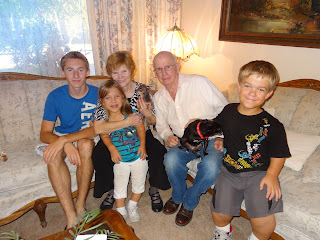 We also got to enjoy stake conference this weekend.

We made our picks for the next Amazing Race season this weekend :)

I got the Halloween decorations out (no possums in the box this time) just before I got sick with a horrible body achy, tired, don't want to do anything, cold.

Today I'm starting to feel a little bit more in the land of the living. 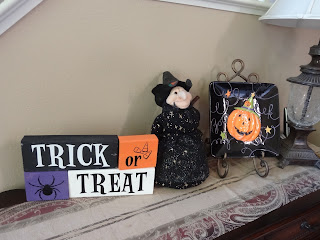 Posted by Christine at 1:00 PM

I'm glad you are feeling better :)

That is so frustrating for Taylor. Hopefully the MRI will have all the answers.

My Grandfather used to always have trick gum when we were growing up. We LOVED it, but it hurt. Sending prayers for your son.