Ashley is loving our Spring weather. Her and Jacob love playing outside.

I agree with them! I love taking walks right now with the flowers blooming. There is so much to see and smell and enjoy! I'm glad they like to be outside to enjoy it too. 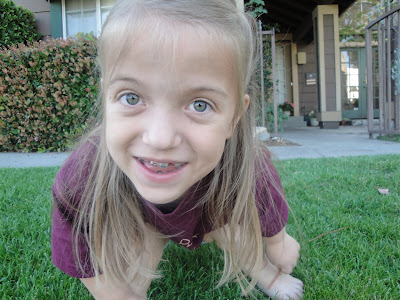 This was a project that Jacob (really me) did to get extra credit in class. He brought his two favorite desserts, blond brownies and coconut bars and had the class try one of each to determine the ratio of who like which better. The majority of the class just said they liked both the best. I think it threw the whole ratio thing out but he still got extra credit. 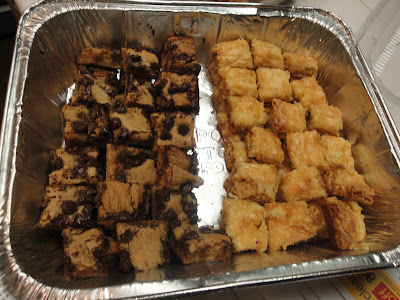 We're still collecting books for Taylor...if you have any we would love them. We've been very thankful to everyone who has donated books or money to help his eagle project. They are piling up! I'll post the total number he has collected when we are done! 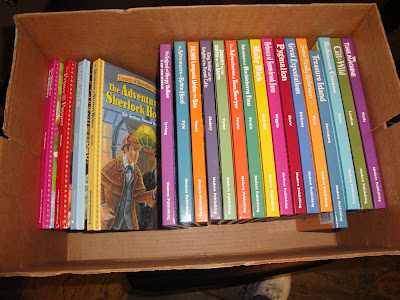 Taylor has decided to take on another challenge. He has decided he wants to learn the bassoon. So far he's learned that...

it's heavy,
it's hard to get the double reed to sound like it's supposed to...
it seems to attack him every time he plays it since he ends up with a scratch, dent or bruise every time.

Not exactly a "marching band" instrument but it would be good to add to his repertoire of instruments.

All I can say is good luck Taylor. 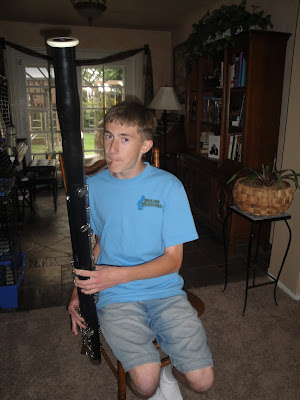 This was at a fun birthday lunch for Amy Stubbs at Olive Garden. (Always nice to have an excuse to go out to lunch with friends :) 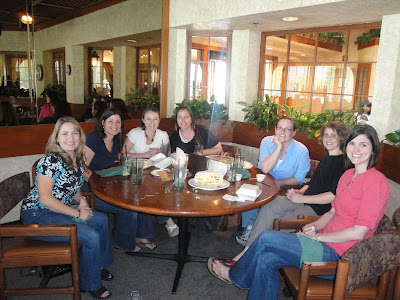 The best part was Jennifer Shaw's awesome cake. It had creme and strawberries and I don't know what all else but it was the birthday girls favorite cake and I have to agree. It was yummy and to top it all off she had used her newly bought Cricut to cut out gum-paste words and decorations for it!

It was funny during the course of the lunch one lady would tell another how good they were at a certain thing, that lady would compliment them on how good they were at something else. I realized that it's natural to compare ourselves to other people's talents but we are all talented in our own ways and everything that we are good at contributes to make everyone's life better when we are willing to share. So...basically I don't have to be the best cake baker if you have a friend that is :) :). I left happy to know these beautiful, talented women that make my life and life of my family better just to know them. 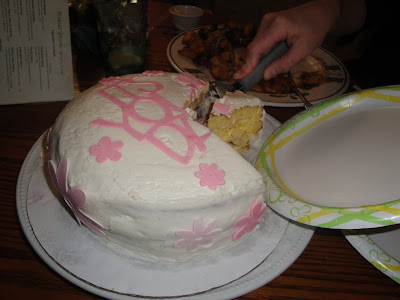 That night I got to go to dinner (right after the afternoon session of conference) with another group of beautiful, talented women who I'm happy to have in my life to visit with Theresa who was visiting in town from Utah. (We were sad to be missing a couple who couldn't make it but they are in this category as well ;0)

So while the boys were at Priesthood session we were visiting and eating a yummy dinner at Cheesecake factory. 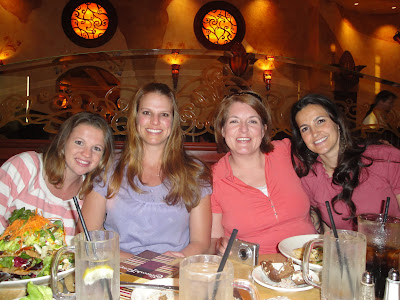 This was the children's dinner. Don't feel too sorry for them, they think it's a treat to eat the frozen stuff on a night when Jeff and I are gone for dinner.

The only problem was...dont store frozen dinners on their side. The brownie will ooze into areas it's not supposed to go...

I had to do some scooping and convince Ashley that it was still OK to eat! 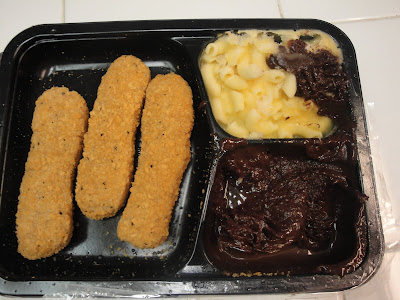 The next day was Easter!! 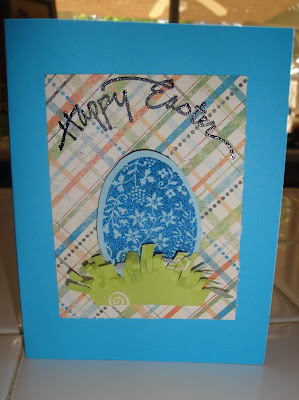 Checking out the loot... 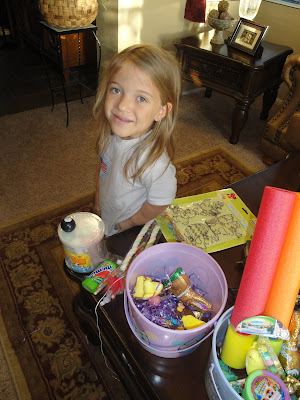 ...straight out of bed...hmmmm....looks like Jacob slept in his jeans last night...despite what we tell him he still does it time to time...(how uncomfortable!) 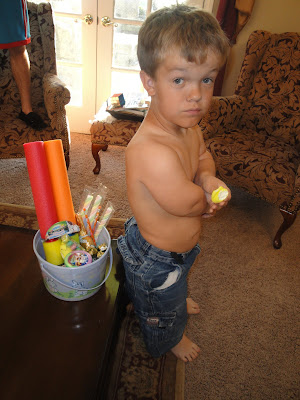 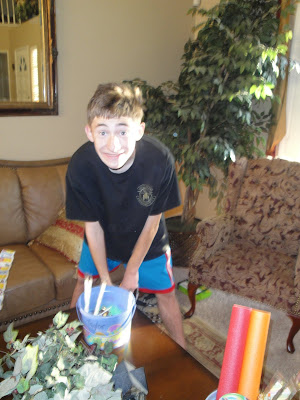 So this year for conference we had the kids dress in regular clothes. Partly because we were having family come over later and partly because the pajamas fostered way too much casualness and I am thinking that in jammies it was too easy to slip back to sleep during the talks (some more than others). 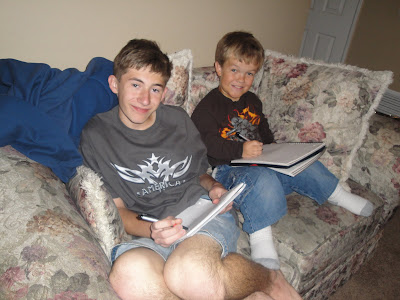 We shared the afternoon session with Dale and his family. 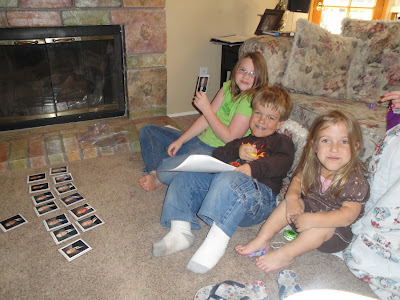 Then we had Steve's family come over as well for Easter dinner. We also had Ben come over to eat with us. It was perfect timing as he was on leave from Iraq. Nice to see him again. I'm sure he was even happier to have a break from Iraq for a little bit. 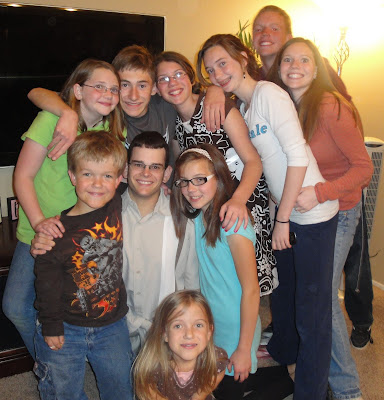 Normally we don't really get together formally for Easter but since we wanted to make a nice dinner and it's always more fun to share it with someone we were happy to have everyone over.

It was funny because I passed out food assignments and we all brought too much since we're used to much bigger family gatherings. 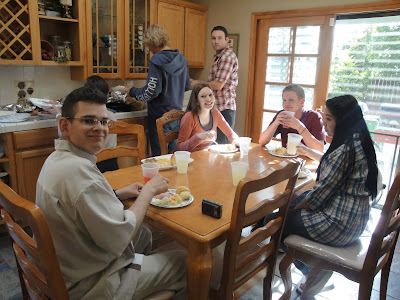 Kids outside enjoying the weather. 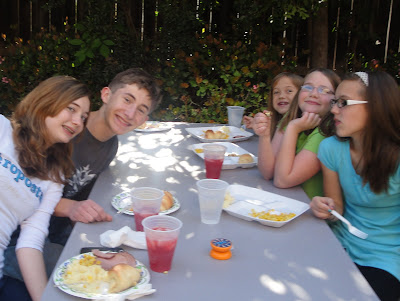 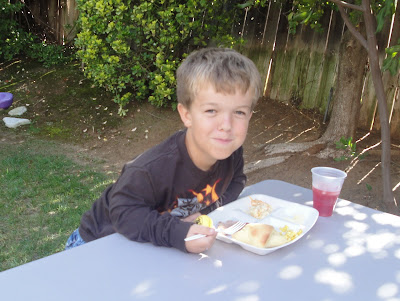 Fixing up a scraped foot. I guess thats what you get when your playing outside without shoes on! 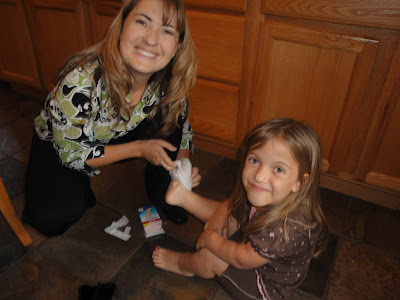 It was Tahna and Mo's birthdays so I had made some earing and bracelet sets for them to choose from...that sparked pulling out the beading stuff so people could make what they wanted... 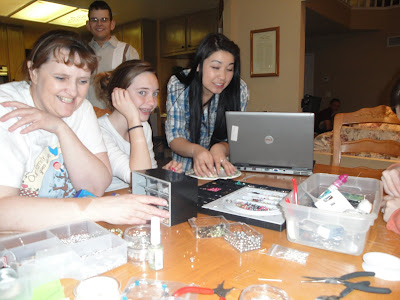 hopefully they are all enjoying their custom made jewlery... :) 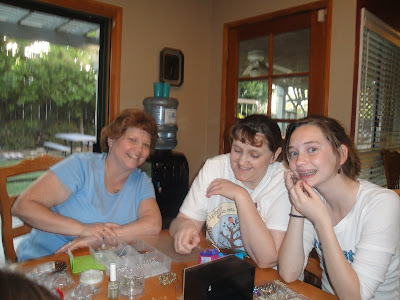 The next day we packed and prepared for our trip. While I was in the middle of hemming some new shorts for Jacob my sewing machine went out. Luckily my beautiful/talented friend Amy (from the birthday lunch) lent me her sewing machine to finish the job. Finally we got everything ready to go.

Little did we know that our Easter suprises weren't over yet. The first morning we were in Hawaii we got a call announcing that our chinchilla had babies. Instead of bunnies or chicks we had kits. 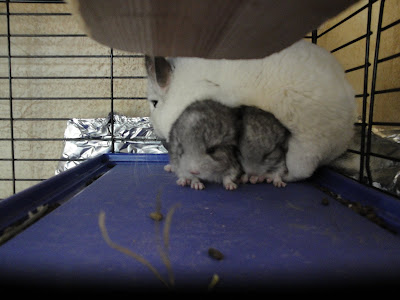 We knew that it was a possibility that Chimi was pregnant but it was hard to tell. We really had no idea. It was Ashley who kept saying that she was. Not more that 15 minutes before the call she commented "What if Chimi has babies while we are gone?"

We were very grateful to fellow Chinchilla owners, the Scotese girls who were watching them. They went above and beyond rescuing babies escaping from the cage and separated Churro with one of their own cages and everything. They were instrumental in us having healthy baby chinchillas when we got back.
Posted by Christine at 9:52 AM

Wow- talk about a surprise! I was wondering when you mentioned the new babies whether or not you knew she was expecting. :)