Conference Weekend was enjoyable. Watching conference on TV in Jammie's is the best! It was nice to hang out as a family and listen to conference talks and watch what the church is doing around the world. (We loved the merry go round that lit up the school in Africa.)

Right before it started Ashley asked me about having our conference booklets that I've printed off the Internet in the past. At her insistence I printed some pages off for everyone. 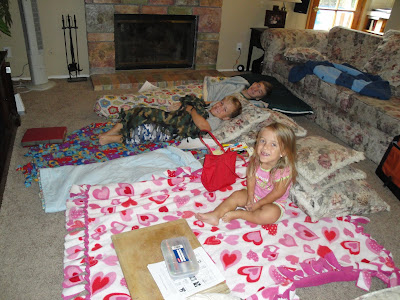 I told the kids that we would be have a game for family home evening the next night quizzing them on the conference talks and they could use their notes if they took them.

No one took notes except me. In fact Jacob only did one page of his packet and after all of Ashley's prodding for packets she did 1/2 a page.

No problem, we had a fun game the next night at Family Home evening and I was able to come up with lots of really good questions. Those who paid attention the day before got more points than others...hmm hmm... I won't mention any scores though. Needless to say nobody had any notes to cheat off of.

There was a winner and prizes so I'm hoping that they learned their lessons for next time :)

* Monday I had to spend the day at the mercy of Honda as I relinquished my car to them while they fixed it. My dome lights haven't been working for almost a year and there was an air conditioning vent they needed to replace. Since it was all under warranty it wouldn't cost, it just would take time.

I opted to get a ride home and then be picked up later in the day when it was done.

Other than walking to the school to help in Ashley's class, it wasn't too inconvenient. I even got to meet a new friend. Gabriel, who was my driver. He wasn't too talkative unless we discussed movies that were made from comic books. Once that subject ran dry I tried books. He hadn't read any of the ones I mentioned but he told me had read a really really good one, one that he really liked. He said he liked it so much it only had taken him a month to read it, because it was 400 pages. I asked him the title. "I hope they serve beer in hell." Hmmmm, I don't think I'll be reading it but I'm sure glad he liked it.

When I picked up my car they told me the reason my dome lights weren't working wasn't because of a short in the wires (which is what they originally thought)but because whoever installed my navigation system (Best Buy) unplugged my dome lights. Nice.

Well I was glad to have the car back because when I picked up the kids that day Jacob informed me that I was going to be one of two chaperons for his field trip the next day. No note or information from the teacher about it so I'm really glad at least Jacob thought to tell me. So we moved Ashley's orthodontist appointment and I cleared my schedule and prepared to go with Jacob.

* Tuesday I arrived at the school a little late to go to Jacob's field trip after a frantic call from him telling me we really did need a lunch today and not just a snack. I walked up just as Mrs. Boyer was saying "Jacob where is your mom?" Whew! 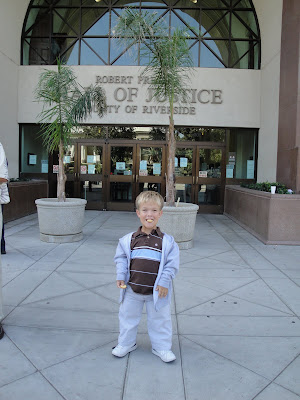 I got to ride in the bus with all the students but I made the mistake of thinking that Jacob wanted to sit by me. By the time I got back to him he was already sitting next to his friends with no room for me. Of course I should've known at this age :).

So I sat in the back right in front of the rowdy boys who sang a variety of songs at full volume both harmless and dubious in nature. I had a nice view of the girls glaring back at these rowdy boys throwing one eye-roll after another.

The field trip was to down town Riverside where the students were able to participate in a mock trial. They were able to see how the court system works and read a script taking part in a pretend trial. 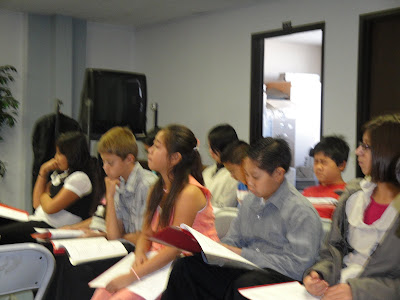 The jury even went to another room to deliberate after the evidence was presented. The students gave some interesting answers and insights into the trial that they had participated in. Jacob was able to play the part of a witness.


After they were done with their mock trial we got to walk over to the courthouse and observe a real trial. Two men were being accused of robbery and theft and they were cross examining the officer who had found and arrested the suspects. It was interesting to watch in action some of the same things that the students had just acted out. 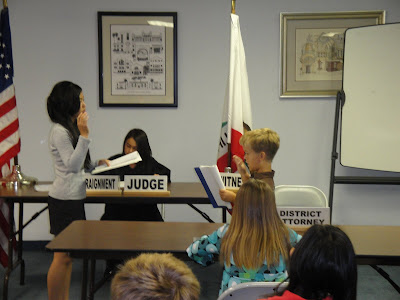 We stayed until the lunch recess which actually came a little early because they ran out of witnesses. The court employees as well as the lawyers and some of the arresting officers all stayed in the courtroom and answered the student's questions. The students had to stand up and address the judge by "your honor". I thought he gave some great answers and the students (or at least some of them) were so into it they would've kept asking questions all day. Mrs. Boyer had to finally excuse us so we could get back to the bus. 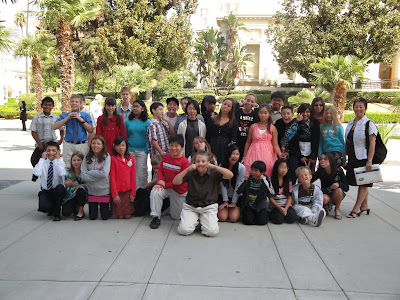 I thought at this point we would eat lunch together, but I guess not. I had been carrying it the whole time but I guess they weren't letting anyone eat until they got back to school. Jacob was starved at this point but when I let him eat a snack while we were waiting to go in the courtroom the other students pointed at the "no eating" sign so I had him stuff it in his mouth and chew quick. On the bus the "no eating" sign was again pointed out, besides it would've been rude to eat it in front of all the other hungry kids. So I carried the lunch back to the school, gave it to Jacob and then went home to eat my lunch.

At the end of the day I asked Jacob how he liked the field trip.

I explained to him it wasn't meant to be fun, it was supposed to be informative.

* Wednesday I went to the parent/volunteer meeting and then to Mrs. Boyer's to grade papers. I was in her room for about 5 minutes before it was time to go to recess.

Just having received our instructions that "no parent is allowed to stay in the classroom, playground, or lunch area during recess or breaks" I had to move myself to the office to be obedient. I guess if we are in any of these areas without a teacher supervising us we are a liability. I won't even get into how I feel about that.

I rushed through grading papers to get done in time to take Ashley to her orthodontist appointment. 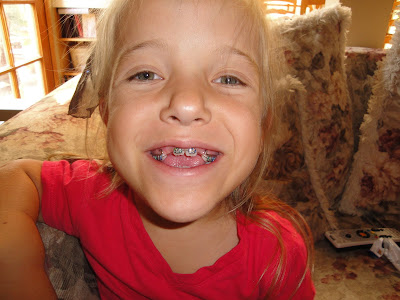 She was getting braces and everyone in her class had her scared that it would hurt to get them put on. She was a little freaked out but I assured her she would be fine.

Once we got there I was proud of her. I don't think it hurt her but it wasn't the most comfortable. We had to keep waiting for the orthodontist so the assistant had Ashley lips all pulled back and the vacuum suctioning her out quite a while before they even started putting the brackets on but Ashley was a trooper.

She wanted green and blue rubber bands. (She says she's over pink now)

That night I went to a GATE meeting and learned how I can be a GATE advocate at our school. It was actually a good meeting because they went over some of the myths that are out there about GATE students and got me to be more aware of my children's need to push themselves a little more and being more proactive in their learning both at school and at home. I even woke up the next morning with an idea to use in Jacob's class for their next social studies segment. So the next time I'm in the classroom I'll see if the teacher will go for it.

* Friday I went in and helped in Jeff's office for awhile, played assistant secretary for the day.

After school we cleaned the house, dropped Jacob off at a birthday party, and got Taylor back to Jeff's office for his Ukulele lesson from Jeff's client. 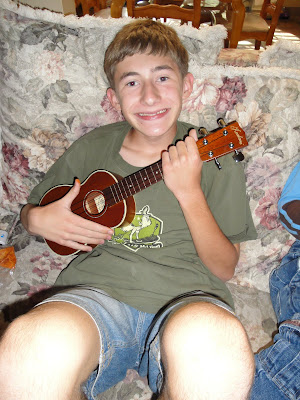 While everyone else was gone I brought Ashley to Farmer Boys to redeem her gift certificate from her award. The rest of the weekend was filled with soccer, errands, visits, church and feeding the missionaries.
Posted by Christine at 11:21 AM

So funny that Ashley is "over" pink. Maia was too for about 9 or 10 months- her favorite color is aqua or blue. But when she picks her clothes, she picks the pink. So funny, these girls!