It's October and it's just starting to cool off here.
Well mostly in the mornings and the evenings because it's still supposed to be 85 today so I guess that's not too cool.
But...we don't have to run the air conditioning nearly as much as last month so I'm happy about that.
Lately football has been making more of a showing in our house. Jeff's got his fantasy football team all figured out and I see him sneaking peaks at scores here and there. A couple of weeks ago we got to go to the King vs. Citrus football game.
Taylor and Jacob who don't seem to have as much school spirit as we do decided they didn't want to go to the game, because none of their friends were going. So we brought Ashley who wanted to sit with her friend Kate.
Kate was there watching her brother who plays for Citrus so... 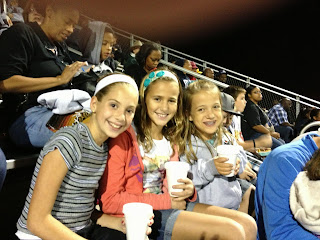 We sat on the opposing team's side. It was like a mini Thompson family reunion that night! Everyone was out watching Trevor play.
Trevor did great but King ended up winning. We had to cheer for King on the inside rather than the outside. It was funny when Jeff wanted to go to the King side to buy a t-shirt during 1/2 time he had to explain himself to the confused people working the gates. Ha ha. 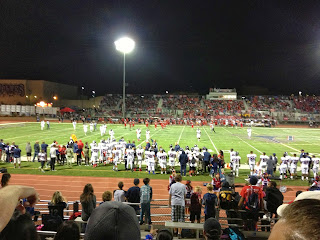 We also had our Stake event. It was a country fair pie night following the general Relief Society broadcast. Both the broadcast and the pie night turned out great.
We all pulled out our fall decoration boxes and I got to go to town. Then we pulled it all down at the end of the night and it pushed me to decorate my own house. 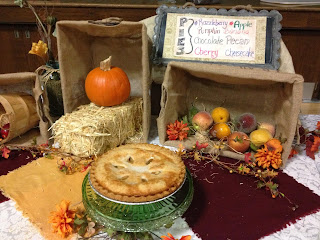 Cindy Pendleton got a big group of us together before to go out to dinner and then we got to socialize afterwards over pie. It was fun and I got to meet a couple of new friends.
The next day we were invited to a dinner at a friends house where all us guests got to help make the dinner. There was lots of cutting up and combining things for fruit salads, grain salads and more. It was a fun way to have a dinner party. 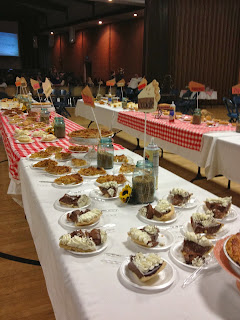 I've been getting in the crafty mood again too. It seems like that happens when the weather gets cooler. I was running low on cards so I started creating... 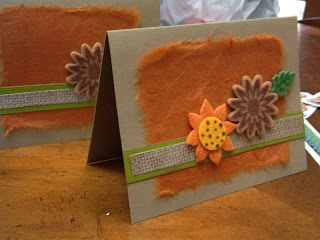 Cooler weather also gets me in the mood to bake. I've tried a couple of new recipes. I got this one off the internet. Ashley always complains when I make boxed dinners so I limit them to no more than once every week or two. This one was called "Crazy Good Casserole" and it got good reviews so I was hopeful.
It was a casserole with chicken, pasta, cream of chicken soup, and cheese topped with bacon. It was pretty good but kind of bland. It tasted like a glorified mac and cheese with chicken in it. It was good if you got a bite of bacon but it needed more flavor.
Jeff thought the Velveeta box mix dinners had better flavor.  I might've done better with the box diner. It's pretty sad that we are all so used to the processed stuff homemade tastes bland to us! 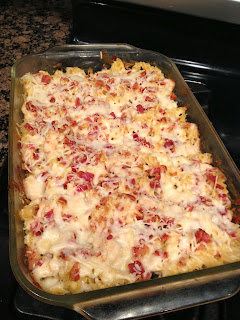 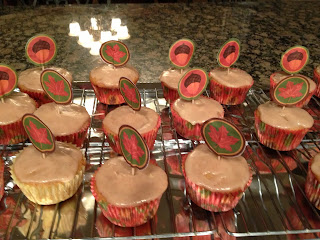 This last week I had the opportunity to go to the temple with ladies from the church. I enjoyed the new temple film and lunch at Café Rio afterwards.
The friend I drove out with had to get back early for work so I ended up driving back 3 older ladies that are outside my normal social circle. They enjoyed the lunch and I did too.  I really enjoyed talking with an 83 year old grandmother full of life experience and wisdom. 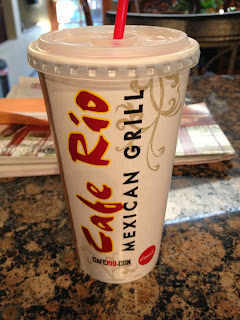 So a quick update on the kids.
Ashley is doing good in 6th grade. She loves her teacher and she is being responsible with her homework and reading. I don't have to remind her nearly as much and she is taking control of her school work. (hooray) Now practicing piano is another thing...
This is the beginnings of Ashley's Halloween costume. She is going to be Thing 1 and Thing 2 with a friend of hers. They decided to get red footed pajamas and then make the rest of the costume. Well since you can't really find them in the store for their size we ordered on-line.
I ordered this guessing what would fit her and was hoping for the best. It came just in time for conference weekend and it ended up fitting her so well I'm not going to have to hem it (a miracle). She wore it watching church this weekend! :) 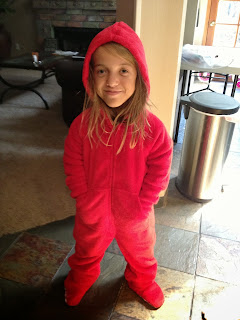 Jacob is doing well in school too. The desk we got him for his room seems to help. He has a place to do his homework without distractions. Jacob will do his homework with his headphones on and sing along to the music. I can't talk to him (because he'll never hear me) but at least I know he's working.
Jacob was very happy to get his braces off this week. Smooth teeth. He got a cup full of things he can now eat...even though he was eating all that stuff anyways ;) 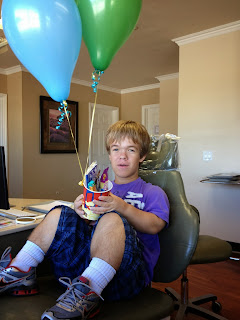 Taylor is doing good at school and is now looking at applying to colleges. He is taking the ACT and re-taking the SAT a week apart and is trying to figure out future plans even though it feels like he just started his senior year. Applications start Oct. 1st. I didn't remember applying that early but here it is.
This weekend all the chinchilla babies sold and now just Chimi and Churro are left. One of the girls that bought a baby had another chinchilla that she takes on bike rides and walks and plays with all the time. Taylor is planning to let Chimi and Churro go too. As he gets older it's hard to put the time and energy that he used to put into them and he wants them to have a good home. It's bittersweet but I understand. 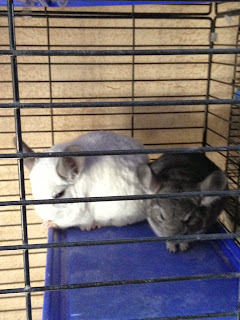 Jeff is doing good and busy at work. He is busy at church too and his only complaint in life is probably being tired. He flew out of state for 2 motivational speaking trips last month and said 2 is too many for a month!
Here is the washing machine mishap right after his trips. His brand new, freshly tailored shirt bit the dust when a pen was left in the pocket.
I could say "Don't you check your pockets before you put your shirt in the laundry?" but he could say "Don't you check the pockets before you put them in the washing machine"
Well neither of us check pockets very well. He was actually very good about it and just said "Those things happen".
That why I love him. 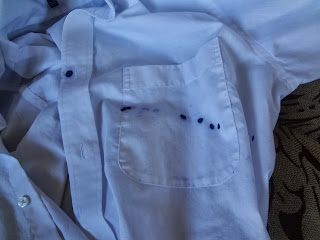 As for me I've gotten over the funk I was in when the kids started back at school and I didn't know what to do with myself. I've started new projects and looked for more to do than putter around and wait for the kids to get home. I've looked outside myself and tried to serve more and do more and not just waste time. Looking at the calendar it won't be too long before I'm too busy for my own good anyway so right now I'm just trying to enjoy the time I have to choose what I want to do.
I thought this was funny I was eating cereal the other day and Jacob was grossed out saying that it looked like turtle food. This was what I was eating... 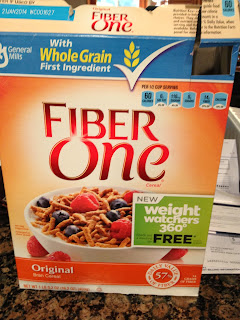 This morning before I ate it I put them side by side to take a picture. Jeff came downstairs and looked at my bowl and said "Why did you pour it all out" He thought it was a bowl of turtle food too. Ha ha!
Pretty much the same size and shape so I can understand. 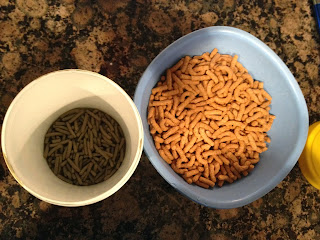 What a great post Christine. Can't wait to see Ashley's final costume. Jacob getting his braces off, woot woot!!!
Also on that recipe that was rather bland, don't give up on it, just sprinkle a teaspoon or two of chicken bullion, it always pumps up the flavor--you can mix it in with the condensed soup. :) I love seeing your blog. Miss you!

Isn't fall amazing? I love all of your decorations and baked goods. I laughed at your laundry story. Kyle isn't allowed to complain if I mess something up, because he knows he's welcome to do his own laundry. I've told him, "It's not my job to wash your clothes...I do it because I'm nice." Looks like you're a lot nicer wife than me! ;)