Jeff had the opportunity to speak twice this month. Once in New York and once in Provo, Ut. Since it was going to be a quick trip I decided to go with him. He was going to be speaking at BYU at an insurance convention.
We made arrangements for our nephew and his new wife to watch them for the time we were gone and we flew up to Utah. The kids are about old enough that they can almost take care of themselves and they did a great job being responsible while we were gone.
The flight to Utah was much better than the 5 hour red-eye flights we normally take to New York!
We could see the Y from our room. 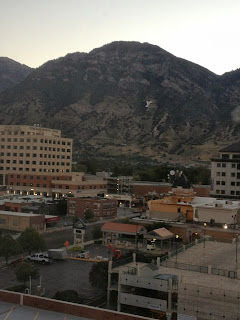 I got to hear Jeff speak the next day. He gets the chance to speak more often than I get to watch him. I've only been able to attend his talks probably a handful of times. 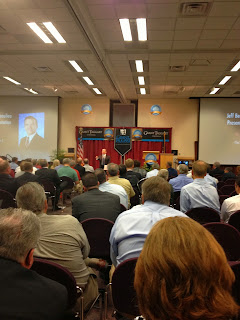 He did a great job and his motivational speaking even helped me get motivated with some new goals and a change of attitude of my own. So I was glad I was able to go with him. 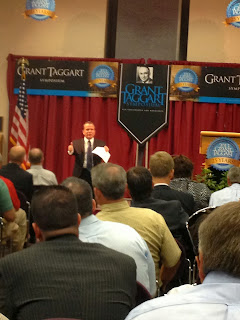 After his speech we headed to West Jordan for an appointment with one of Jeff's clients. My sister's house was a couple miles off his route so Jeff agreed to drop me off rather than go with him.
I got to hang out with Joel and Virginia and the boys. Jeff got back in time for him to visit for 1/2 hour before we had to head back to Provo for dinner. (I'm glad he dropped me off before his appointment ;) 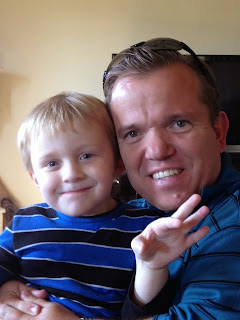 Dinner was at a local place called Chef's Table. We enjoyed good food and was able to hang out with the other presenters for the convention. There were conversations on politics, the state of the economy, business ideas and more. We enjoyed handing out with both old and new friends. 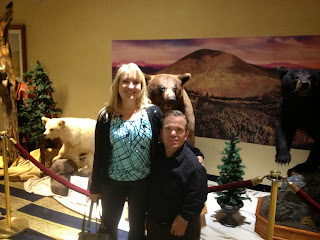 The next day we were flying home but we had a little bit of time to hang out with Joel and Virginia some more. Joel brought Jeff to his business lunch and Virginia and I went to Kneaders for lunch. I love this place. Kind of a bakery, deli and a craft boutique rolled into one. 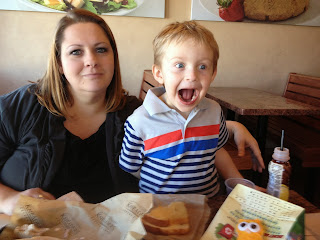 Virginia and I did some craft store shopping while the boys finished their lunch. Before we went to the airport we headed into Salt Lake.
A few years ago Jeff and I had tried to go visit the Hatch Family Chocolate store that was featured on the Little Chocolatiers. It was closed when we went so we thought we'd try again.
Non customers parking in their lot were threatened with being "deep fried and dipped in chocolate" (in addition to being towed) 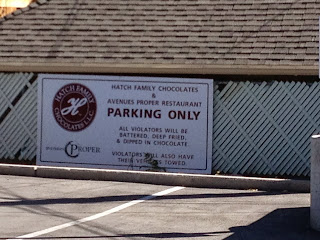 It was opened this time and we got to meet the owners. And picked up some chocolate. 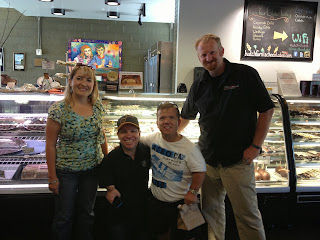 We were sad to find out that the Hatches have since divorced since the show but they are still friends and business partners. 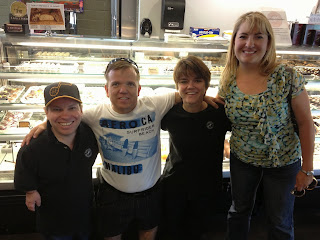 After spending an hour or so at the City Creek mall (fun place) we went to the airport and headed home. The kids were happy to see us and all the goodies we brought home for them.
My favorite find in Utah was the material to make this skirt. Ashley has a matching one from the same fabric. I bought it as a remnant for $5.00. Pretty good deal! 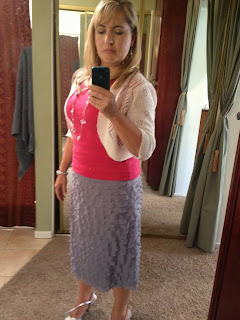 So I have a lot of gaps with no pictures...it doesn't mean that nothing has been going on it's just that I haven't been as good documenting it. It's been a little weird finding things to keep busy with while the kids are at school but I've found a few things to do.
I've had the opportunity to help with a couple of funerals in the ward, I've read a lot of books lately and started helping Jeff with a power point and some more organized notes for the next time he is asked to speak... 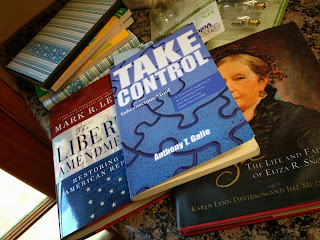 Simone and I have had a couple of planning meetings for science camp and have gotten more parents to sign up to help. Yah!
Also I'm getting ready for the broadcast and pie night this Saturday. 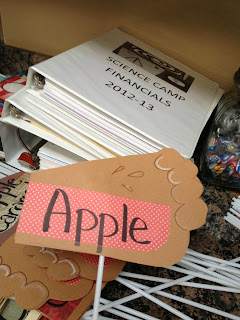 We've had a couple of craft events and a girls night out at the church. I've had fun with those.
Donna has been so busy with Relief Society things lately. She is amazing. 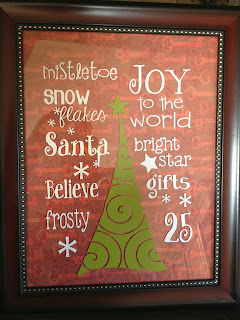 I went to a class with a Chef Brad from TV. His class was actually more spiritual in nature and talked about how we can bring families together when we feed them. He sees cooking as a labor of love and has become more of a joy instead of a chore. In the end he did a cooking demonstration and we got to eat some samples. I thought it was great and a lot of women came. 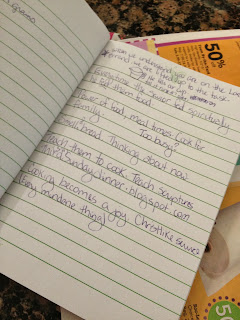 And lastly ... my blender has been getting a lot of after school use lately. It's still been hot here and the kids have wanted shakes. Their first favorite is mint oreo shakes, then Ashley wanted strawberry banana and then when I ran out of oreos they discovered they liked chips ahoy shakes with banana
(it reminds them of a heath banana blizzard from Dairy Queen) 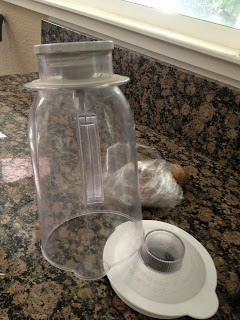 Today was a cooler day so the days of shakes might be coming to an end.

Posted by Christine at 3:24 PM

Sounds like Jeff is a great speaker. How fun that you got to go with. I love Utah :)