Jeff is just recovering from his trip to Beaver and it's time to pack up again and head out. He had booked a mini convention with New York Life in San Diego. Of course the kids and I tag along to enjoy the hotel.
We stayed at the Inn at Torrey Pines.
We pulled in just as Jeff's meetings started after spending too much time and too much money for McDonalds food for us and the kids for lunch since it was the only fast food close. 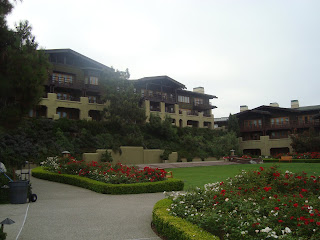 It was great, and cooler than Riverside. Ashley looking out our balcony. 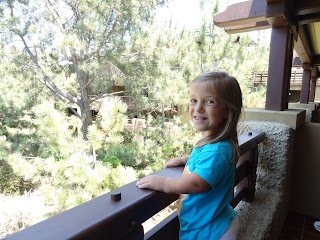 Jacob more interested in the Ipad than the view.
Taylor was missing :(  Taylor jumped back into Cross Country camp and after running was still having migraines and feeling sick every morning so he convinced us he would rather feel sick at home. Since we were going to be gone about 24 hours and all he wanted was peace, quiet and rest we let him stay home. (I think after being gone a week at Beaver he didn't want to leave again) 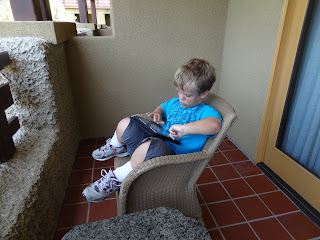 Ashley and I went out and explored the hotel. There was a view of the ocean in the distance but the cliffs made it so you couldn't go to the shore unless you drove a couple of miles down the road. We had a view of golf courses instead. 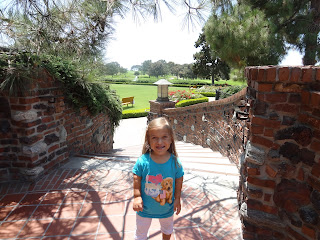 So we hung out at the pool that afternoon....I got in with them and floated around and had swimming contests in the hotel pool floaties.
At one point a little girl took all of them and stashed them at her chair. I thought maybe they were hers and she was mad at us for using them....nope they were the hotels she just wanted all of them and then proceeded to float in all 3 of them at once. 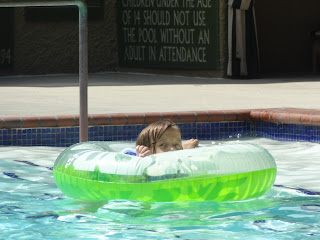 Jacob and Ashley hanging out in the kids size chairs :) 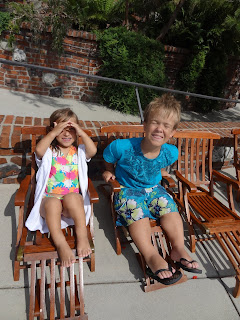 After swimming and showering it was time to get ready for the banquet dinner for Jeff and I. Instead of driving somewhere to get the kids food we went to the golf clubhouse and ordered them stuff. 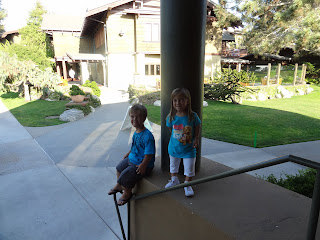 Way better food than McDonalds and actually a better price! Yum!
We set the kids up with a movie and then headed out to eat with our New York Life friends. 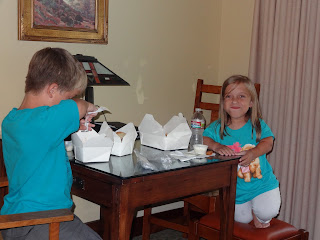 The next morning I got up early to have breakfast with Jeff before his meeting for the day while the two kids slept in a bit. We were watching the golfers play...the particular golfers we watched Jeff declared were worse than him...and thats saying a lot ;) 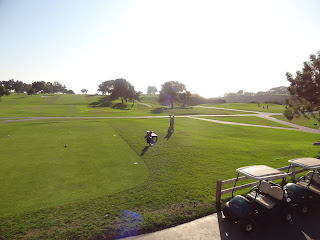 Once I got the kids up and going we thought we'd drive down and check out the Torrey Pines beach. 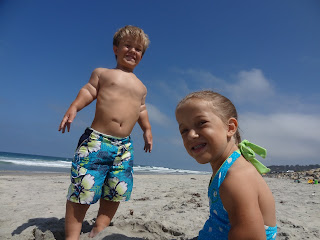 The air was cooler than Newport (but not bad) but the water seemed warmer. At least Ashley's legs are nice and warm :) 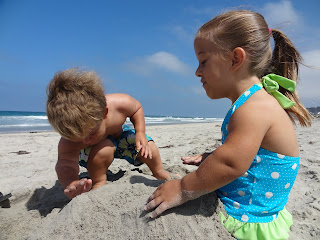 Ashley, always the beach artifact collector, gathered rocks instead of shells.
It amazes me how different each beach we go to is so different, this one had no shells but lots of rocks. 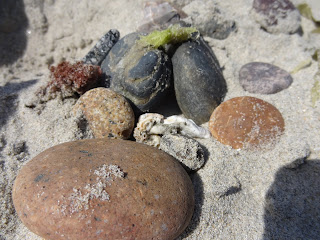 When we first got there Jacob said "How much longer?? Can we go now??" Every couple of minutes. I've learned to basically ignore this and wait it out. After awhile he stopped and we actually made it two hours then we headed back to the hotel and swam in the pool. 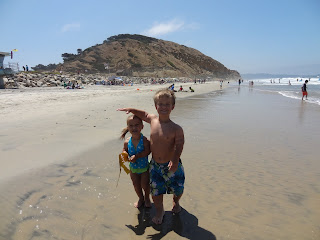 Here's Ashley hiding in a towel on her beach chair. (She was cold)
We hurried back to the room to shower and pack up before checkout and then we met up with Jeff and left.
Every time he does one of these overnight things he never gets to enjoy the hotel, the meetings start before he can check in and end after we have to check out...maybe one of these days he'll get to enjoy it. 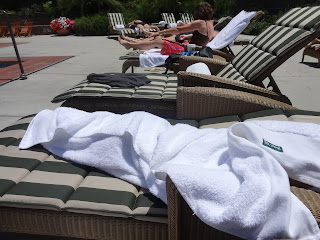 Before we headed home we went to our favorite spot in La Jolla, the childrens beach. It's covered with seals lying on the beach, this walkway takes us out to where we can see them really well. 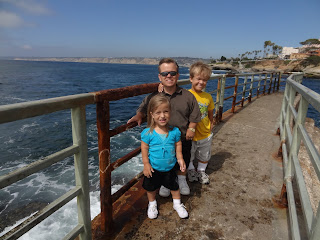 This is the view from one side.... 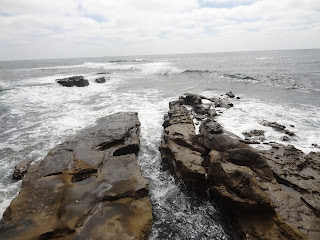 And the beach with seals on it on the other. It's crazy because the beach used to be blocked off from swimmers but now they have it open with signs telling you not to get too close to the wildlife. 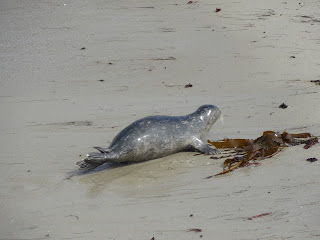 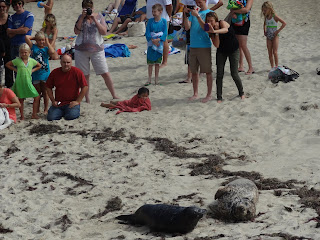 When we got home I think Taylor was very glad to have his family back ( I secretly think he got bored with too much down time ;)

The rest of the week quoted from my journal...
Weds – Recovery day, wash, grocery shopping took Ashley to Activity Day pool party/bbq at the Gardner’s. She had fun with friends while I tried to put away wash…etc. That night went to Chilis with Stubbs.

Thurs – Pool party at Mary Ann’s. Picked up pizza on the way and then hung out with Williamsons, Turleys, and Thompsons. Boys got quiet for awhile. They were in the front yard throwing waterballoons at the workers next door! Meanwhile the younger kids were enjoying the pool to themselves! That night the boys went to hang out with Jacob Rosser and Lisa and I went to the Relief Society Birthday dinner. Lots came but I didn’t get into the pool (just took a shower). Talked to sister Gooch for awhile and got to know her better ;)

Fri – Cleaned the house, did some shopping and got Ashley some school clothes (she’s the only who cares right now) then met Steve and Tahna and Bradford family at the Redlands Bowl to eat a picnic dinner and watch Cinderella. Taylor was at Magic Mountain with Dale, Jared and Jarek going on all the biiiiggg rides. 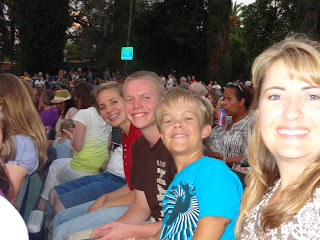 The Redlands Bowl always does a great job with their performances and today was the same they did not disappoint. 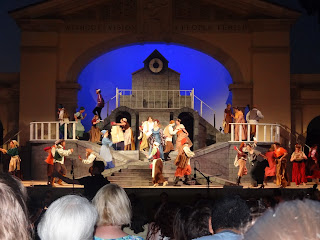 Ashley was very happy because I realized that if I gave her the ice chest to sit on during the performance she would be able to see. (This saved me from trying to balance her on my lap the whole time trying get her high enough to see while peeking around her head so I could see). If you look she has a wand that they gave out to all the kids before the performance. 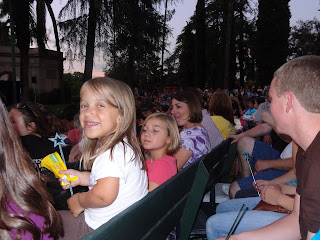 At a certain time in the performance they were supposed to wave the wand and say the magic words and then the carriage lit up. It was a fun night and nice to share it with the Bradfords and Steve and Tahna. 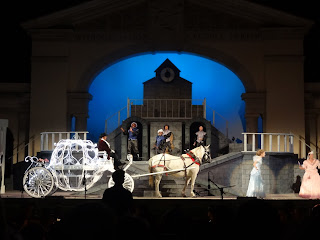 And more from the journal…


Sat – Hang out at home, got trees trimmed, baked for Jeff's home teaching families and party places and got a goodie box together for the Todd family, dropped off cookies to the neighbor. Jeff and I went to a party at Todd and Kristin Thompsons. Had fun hanging out in the hot tub with the other couples reminiscing about teenage days and how we knew each other back then....a little disconcerting that Jeff and I are the oldest couple there... ;)

Posted by Christine at 6:38 PM

I'm still amazed at all the fun things you do! I think the children's beach with the seals looks so fun. And my kids would love to search for sea shells--or rocks. :)