The end of summer

The first day of school is here!!
Always bittersweet and why does it always seem to be the hottest part of the summer here in Riverside.
Since there isn't any seminary yet...Jacob was the first to leave this morning...off to 8th grade.
(We had to force him to change his shirt, he was all grey before and wasn't wearing any of his new school clothes) 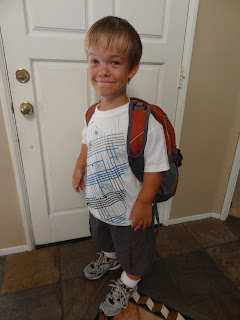 Taylor off to 10th grade
No problem getting him to wear new stuff :) 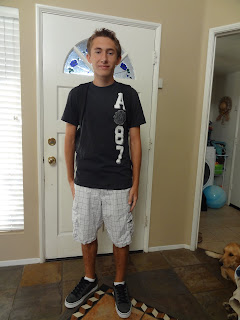 Ashley off to 4th grade.
She said she'll miss Maddie 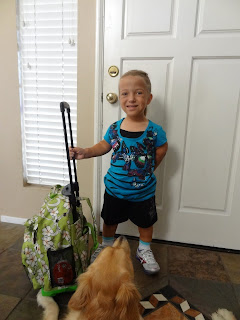 The last two weeks before school started we went shopping for school clothes (using Kohls coupons for most of it) went to separate registrations days and picked up the mountain of books for the boys, cleaned out 2 of the bedrooms, went to the last pool day of the summer, did a visiting teaching visit, have been getting up with Taylor every morning and walking/running at 6:00 while he does cross country and Ashley seemed to try and arrange play dates with all of her friends that she didn't get to over the summer.
Other than that we tried to squeeze a couple of "last" summer things.
One was our last trip to the beach.  Some of them were a different group than we normally go with...Trupp's, Pendeltons, Bradfords, Nelsons, Borcherdings, Smiths along with some extra friends all went. 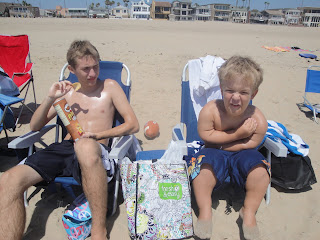 There were a lot of people for Taylor to hang out with...it's fun because all these guys are now in cross country with him.... 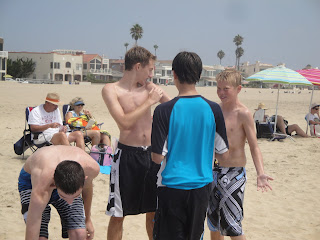 and Ashley had fun playing with the Bradford girls (they ended up coming over the next day for a play date)
but Jacob complained that there wasn't really anyone his age to hang out with...oh well it's hard to make everyone happy at the same time. 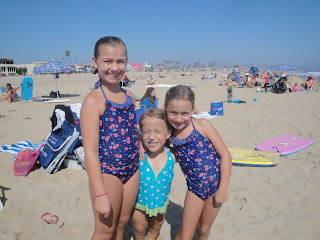 The girls spent the whole day collecting sand crabs...I was pulled over multiple times to observe them ;) 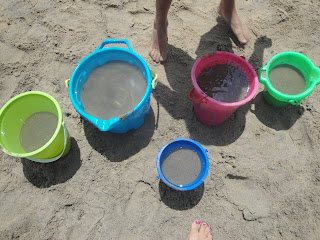 Even the big kids got into sand creations... 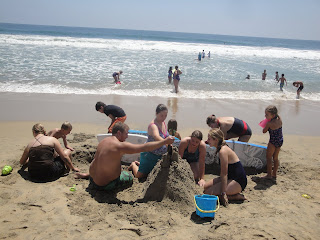 and burying each other.
After the beach we got home just in time to clean up a little and get Taylor to cross country...I didn't get a dinner and shower until 8:00...what we mothers do for our kids ;) 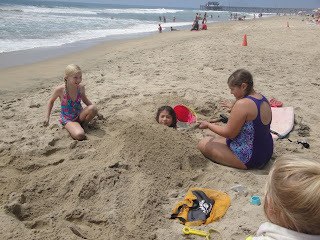 The last couple days of our break I thought we'd get one last trip to Soak City in...I was thinking it would be nice to actually go down one of the slides this summer. I'm always hanging out with Ashley at the wave pool and sometimes the lazy river because she can't go down the slides. 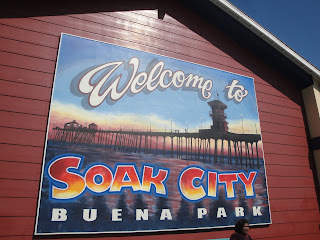 So for one day she went to a friends house while I took the boys to the waterpark and got to ride the slides with them. We had a great time and I even bought them food in the park rather than making them go out to the car to eat a picnic lunch :)
We went to Buena Park instead of Palm Springs (90 degrees vs. 115)
We had so much fun we decided to go back with the whole family on Saturday after chores and stuff were done. We even brought the Rosser's with us so Jacob Rosser could get the waterpark trip in he was looking forward to all summer. 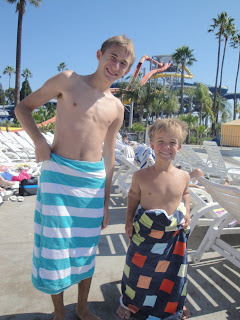 The Saturday trip wasn't as fun for some of us....
Taylor ran that morning and ended up with a migraine that he still has today (3 days so far)...he was in this position pretty much the whole time even with all the medicine we could give him. He was so patient though. Got to love him. 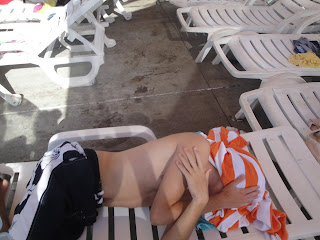 Since it was Saturday, super hot and kind of the end of the season the park was really crowed! People everywhere, we had to fight to get a chair, ended up renting a tube because the wait for one was long and twice we got kicked out of the water because some kid had gone poo in it.
Blah!!
Really!!
Twice!!??
We had just come from the kiddie area where we couldn't get in for 1/2 hour because they were cleaning up one deposit....then we got to the wave pool where we were kicked out 15 minutes later.
Everyone booed when they had to get out. 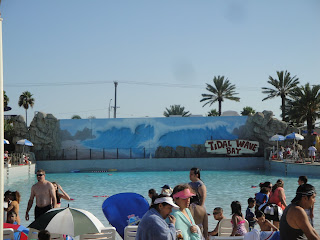 Ashley said "Why are they booing wouldn't they want someone to let them know to get out when poo is in it? They don't want to sit in it do they?"
Good point Ashley 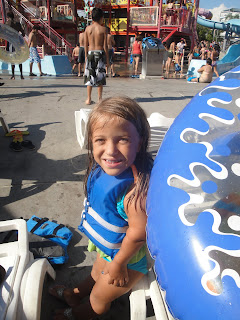 Last Wednesday we got to visit with Jeff 1/2 sister Karen and Lori and their families. We don't get to see Karen often but when she's in town she always makes an effort to see us. She's doing great and it was fun to see her energetic boys enjoying our boys playing Wii and eating snacks. 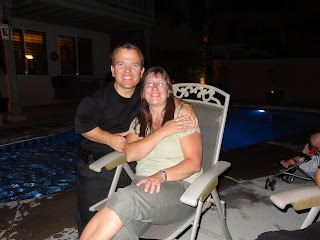 So as summer was winding down the kids are getting more and more bored and begging me to find something to do with them. So this was our attempt at making a tie-dyed t-shirt. I bought the kit last year, pulled it out weeks ago and had been promising Ashley for awhile that we would do it. Finally today was the day. We followed the directions and put a sticker on the shirt that was supposed to stay white while we put the color all around. 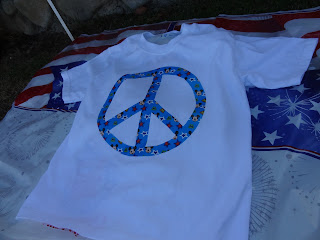 First we wanted to protect Ashley's regular shirt...yes those Stater Bros bags come in handy for all sorts of things. 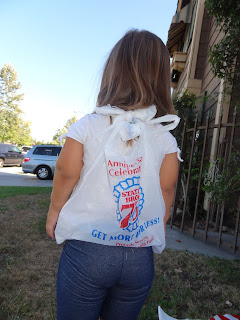 Ashley decorated her shirt, and after sitting for 4 hours, rinsing and washing it and drying it we found out it looked like a muddy mess. The sticker didn't work, her designs didn't work, everything blended together and was just muddled.
Oh well it was a first attempt. She was still pretty happy about it. 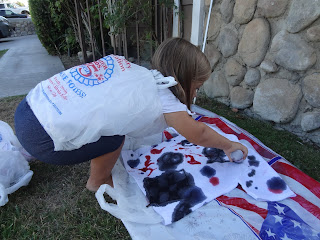 I found out after we were done that the gloves didn't work :( 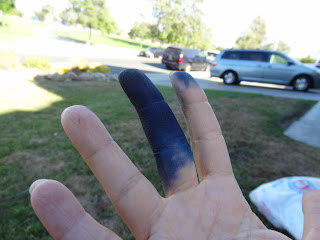 Lest you think our summer was all fun....it was fun punctuated with trying to clean up from fun and play catch up with all the normal daily chores. The only difference now will be... 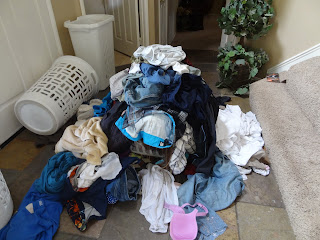 I won't have little helpers to hang out with me as I try and get chores done! 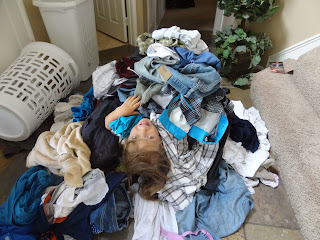 Posted by Christine at 4:16 PM

Ah, summer for kids is the best. I can't believe it was only 5 years ago that I was in H.S and could do nothing over the summers...seems like a lifetime ago! I'm jealous of all your family beach trips. And, I too think Ashley had a good point about not booing the poo announcer :)

Is that water park new. It was not there when I lived in Buena Park, but then again I have been in Utah for the last 18.5 yrs. Christine, I love seeing you and your family having such a great time together and can see that they enjoy. You have a lovely family,and good luck to them during this school year.

Summer time is great. I miss it already! The beach, the waterpark, it sounds lovely right now. I love the first day of school pics and maddie included.

Hi!! I stumbled upon your blog and I am loving it and your family! I too am an LDS mom raising Alexa (AH) 3 and Madilynn (achon) 3 months. Thanks for sharing!!

PS could I add your blog to my blog, it's how I check them. please email and let me know....
kerrilaufer@yahoo.com