I have a couple of pictures that I forgot to post before. Andrea was nice enough to send me some of Mclain's pictures he took on the calico campout Taylor went on while we were in LA with Jeff's speaking. 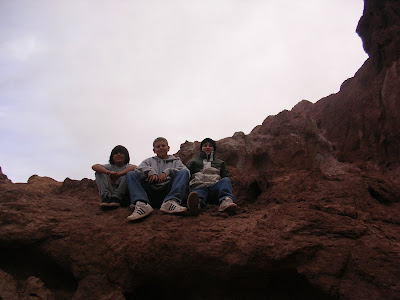 The leaders took the boys out to do shooting but since Taylor has already done shooting before, and he doesn't like shooting he had more fun... 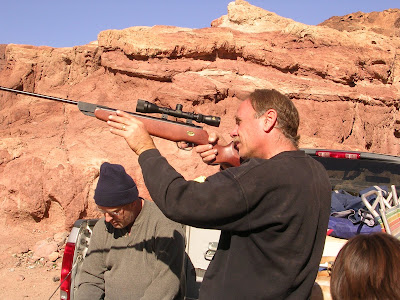 climbing up the rocks and exploring caves. I was worried when he said they were exploring caves...but I guess they were just the beginning parts of caves and didn't go very far in. (Probably closed up mine shafts) 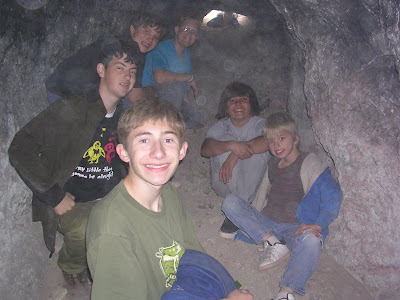 Well I was able to see the source of the dirt all over him when he came home from his campout. At least he had fun :) 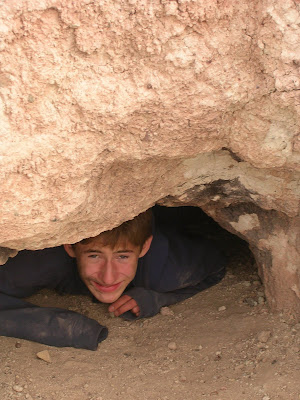 This last week ended up being a busy one. On Monday Taylor decided to accept an invitation from a friend to join her ballroom dance class an hour before Ashley's weekly class.

He audited the class first to see if he would like to join and he ended up liking it more than he thought he would. The teacher seemed like a good one and now Ashley is thrilled that her older brother will be "taking dance" just like her and be in the recital too. I think it will be good for him to learn something new before he's too busy with band next year. (I'll just have to prepare ahead of time for the 2 hours that I'll have to be at the studio right before dinner time and family home evening.)

Tuesday was our normal crazy Tuesday with Jeff working until 11:30 at night. He went on an appointment with one of his new agents after mutual to help them out. Whoooaaah I forgot what his younger days schedule used to be like. I guess helping out the new agents he will have that schedule again sometimes.

Wednesday Jacob stayed home sick from school. It was my day to help his teacher grade papers so I went to the class and picked them up and brought them home to sit by Jacob and correct them. He was very interested in how he did. It ended up taking 2 1/2 hours but what a better way to do it while sitting next to my sicky son on the couch with the TV on.

That night was our Relief Society mother daughter night. We had card making, a fitness demonstration, ice cream bar and seed planting. We didn't know how many people we would get but we ended up with about 30 mothers and almost just as many daughters! It was a pleasant suprise and a fun night.

Thursday was was my last day to shop for a formal for me for Jeff's New York life kickoff party so I ran to the mall. I scored at JC Penny's with a dress that I was happy with and black high heels to match from Payless (on clearance for $8.00 no less).

It was also all the class celebrations at school since they would be off on Friday and Monday. I committed to bring fruit-ka-bobs so I had just enough time to buy red and green grapes at Albertson's on my way to the school for the party. ($8.00 for two smallest bags of grapes I could find! That's why I don't really shop at Albertsons) 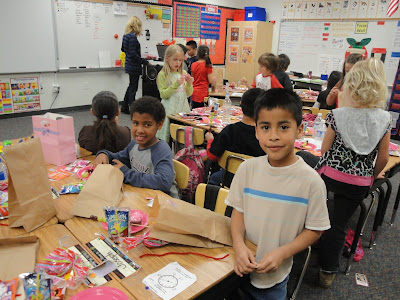 Nothing is better than celebrating a holiday with friends. 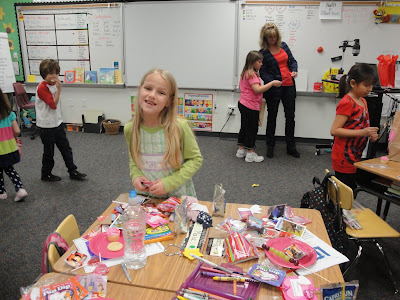 I tried having the kids make a craft too but...with all the valentines there wasn't time so they went in the bag with everything else. 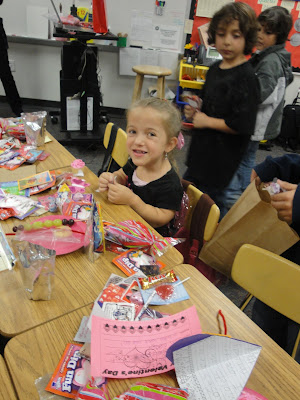 Friday was a day off and we ended up having Chloe and Natalie over for the day. It was actually fun to have two imaginative girls around to pull my kids out of their TV, video game stupor. All morning they played "robo dog" Here is the prototype drawing compliments of Natalie and Jacob. 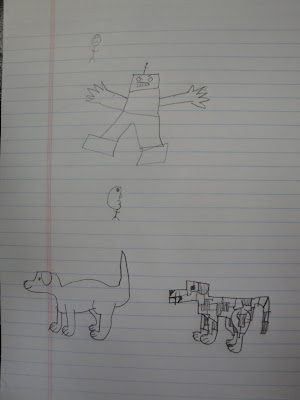 Here are the "robo dogs" one complete with costume. 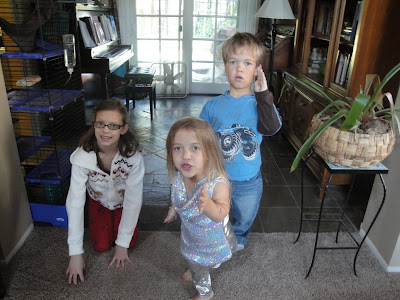 For lunch I took them to go see Princess and the Frog at the $2.00 theater. We ate hot dogs and popcorn and large icees (sorry Sharla). The movie was actually was more enjoyable than we thought it would be. The kids loved it.

That afternoon the kids played while I got ready for Jeff's kickoff party. The girls were picked up with 10 minutes to spare before it was time to go.

It's always nice to see friends that we only get to see once a year. 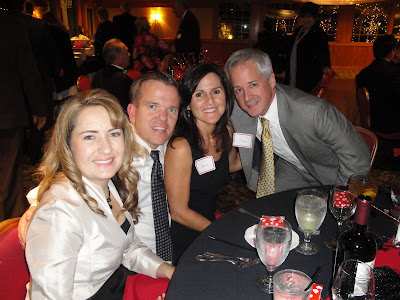 This year we had the Parkers, Stubbs and the Gunnells with us to enjoy the yummy dinner hosted at Castaways. 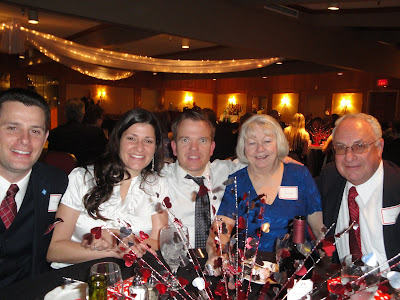 Along with his other awards Jeff was part of the "top 5" club. (He was #3 in the general office last year). 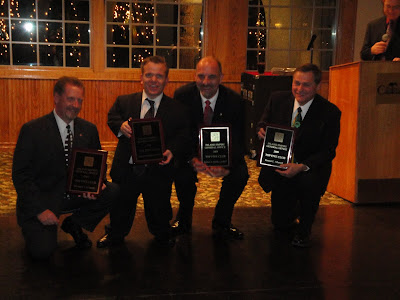 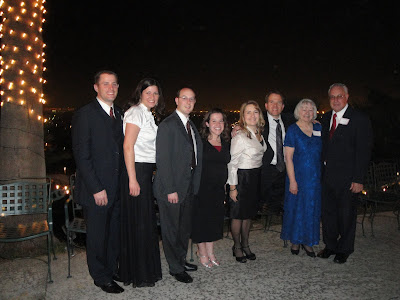 The New York life boys. Vern Parker already his first award at the dinner. It'll be exciting to see these guys succeed! 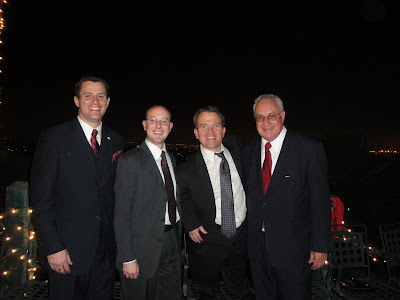 On Saturday we redeamed our Castle Park wristbands that I bought everyone for Christmas. It was beautiful weather, so much better than going in the steamy summer.

The kids have been waiting and waiting since Christmas and today was finally the day we had a large enough block of time to go over there. Walking in I was very happy with the $20.00 we paid to get our family in rather that paying the $22.00 a person which is the normal price.

It wasn't long before we realized that Ashley was tall enough to go on the log ride!!!!

We went on it immediately!!! Including Jacob who had never had the courage to go on it before. (He couldn't be shown up by Ashley)

When me and her went down the first drop and I told her that it was just a preview to the big drop she got a little nervous but in the end she loved it!! 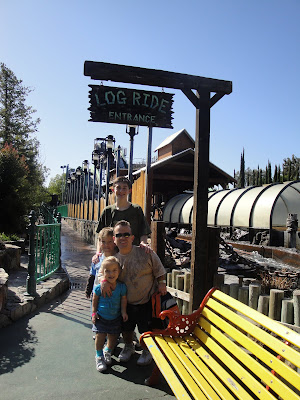 It was a fun day with our kids. 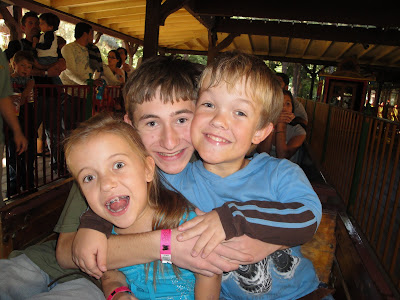 I even got to go on scary rides with Taylor. (Actually after stratosphere this was nothing.)

You couldn't beat the lines there, we were able to get on everything really quick. 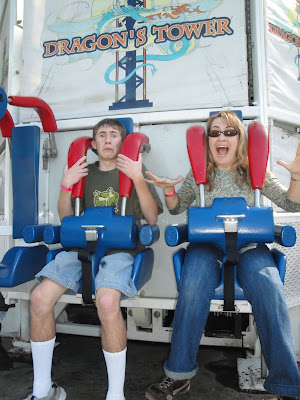 The only problem was that there was an earthquake and all the rides were shut down while and inspector checked them all. We thought it would be a good time for a snack.

I don't know if funnel cake and ice cream is a good idea right before all these rides... 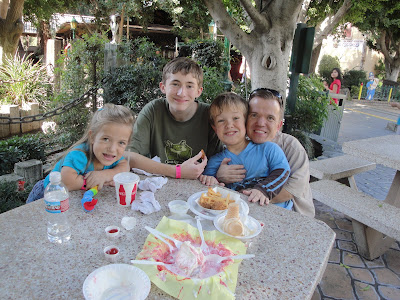 That night Jeff and I had to get ready for the Newlywed game night that we were invited to. Since we were at Castle Park all afternoon I had to come up with something quick. I was able to pull out the chocolate I had bought at Christmas and never had time to use. So I dipped everything I could find that we had at home, pretzels...strawberries and even pink marshmellows.

Here is our chocolate offering... 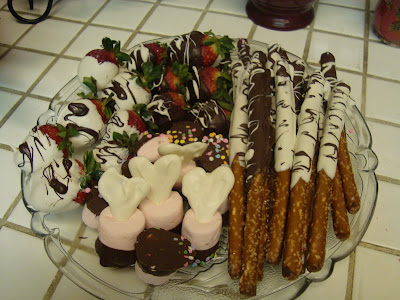 Jeff and I were very happy to win the game beating out the runner up by just one point. This is our second victory :0) Must be doing something right.


The next morning we were all up at 6:00 to get ready for the drive up to Palmdale for Ian's farwell and their 9:00 church. He is going to Mexico (Monterey I think). We are very excited for him. Here was just some of the people at the crazy open house for him. 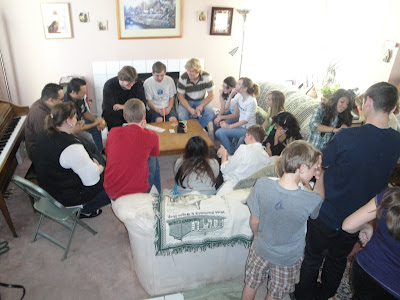 Here's the other kids hiding away upstairs. Smart. It was much quieter :) 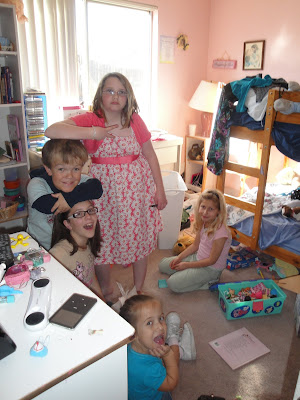 Ian opening our new tradition of giving a camera to the leaving missionary (the Ballantynes did it for Jeff and he never forgot it). 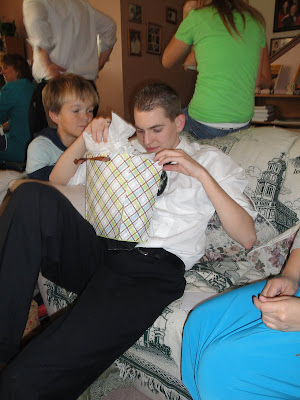 Bye Ian, we'll miss you. We'll be praying for you. 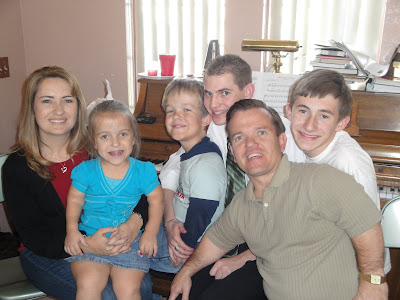 Monday was a holiday as well. We let everyone sleep in and then went to the movies with Steve and Tahna to see Percy Jackson. Jacob has been really into the series so it was fun to take him. Jeff was hoping to meet us there but he got caught up at the office and missed it...so we went to lunch with him instead.

That night we went to Tim and Andrea's for dinner. She cooked us her tortilla soup and gave me the recipe in exchange for me helping to re-paint some wall decorations for her. It was a very fun night and a perfect ending to our holiday weekend. We get so caught up in our busy schedule's sometimes we forget to do social things! It was fun to hang out with their family. Thanks Andrea!

So now we're on to a new week starting on Tuesday with Ashley's new favorite thing...achievement day. :) She's loving it and Marcella and Erin are awesome achievement day leaders. We feel very blessed to be part of a good ward with good friends and good people :) 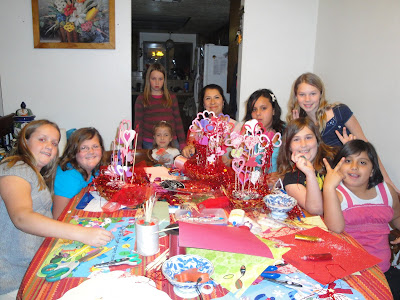 Posted by Christine at 8:37 AM