* We redeemed our FIRST season ticket to an RCC play. They were showing "All Shook Up" featuring a bunch of Elvis music set to a story line. It was a cute 50's theme play with everyone in love with the wrong person until the end.

After we ditched our assigned seats after the first half along with the "kicker" behind me and the "loud mouth talkers" behind both of us, and the "big headed tall lady" in front of us we really enjoyed it.

I would recommend the RCC plays in the future if anyone is into plays, they always do a great production.


* Saturday was the Relief Society broadcast and dinner. It was great! And now I can stop saying Home Family and Personal Enrichment meeting.

I don't think that Bishop understood the changes at first. I had to stop him from releasing all the Enrichment leaders!!!


* Sunday and Monday my sister Angela came to visit. It was so fun to catch up with her and hang out together! 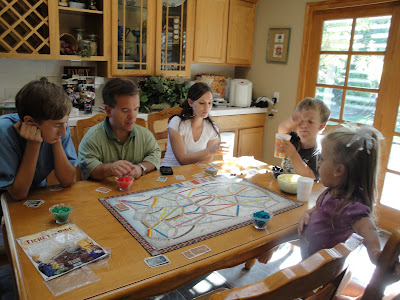 We played games and attempted to have a scrapbook day on Monday. I was interupted with repair men, time in Ashley's classroom, multiple school pickups, dance class and more. I didn't get much done but it was nice to get me motivated to get going on it again. It was also fun to have Angela for Family Home Evening that night.

* This week Ashley had her First experience of having a cavity drilled. She did remarkably well and was a model patient. I actually asked to be able to go back with her to comfort her but they told me to hang on and they never came to get me. I think she stayed more composed without me.

On the way home she kept saying that her face was really swollen on one side. (It was just numb) she kept poking and prodding it and would swear that it was huge on that side :)

* This week I met some of Ashley's classmates including an interesting boy trying to get out of having to read to me by doing an elaborate charade pretending that he had just lost a tooth.

The "tooth" was a hunk of white crayon...he was holding the crayon in his other hand as he was showing us his "tooth". He kept up the charade by holding a paper towel up to his gums to "stop the bleeding". When he realized his hunk of crayon wasn't shaped right he tried fixing it and it disintegrated but he still insisted it was his tooth.

When Ashley got home that day she said this same boy in her class lost a tooth today. I guess he kept it up even after I left :).

* The day after Ashley's cavity was fixed Jacob woke up in a lot of pain from a toothache. We rushed him to the dentist the next day thinking he had a cavity too. It happened to be a partially exposed nerve from a baby tooth coming out. Jacob decided to wait it out rather than have the baby tooth pulled. Luckily he seems to be doing better today.


*This week Ashley got her first Principal's award of the year. 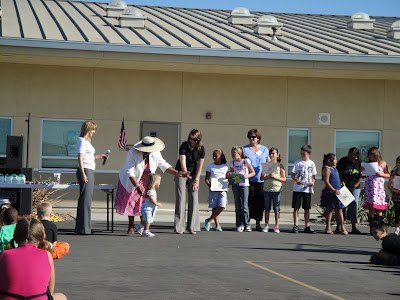 Her teacher wrote "Ashley obeys the rules of the classroom and is respectful to authority at school. She is a good neighbor to all her classmates and makes our classroom a better place." 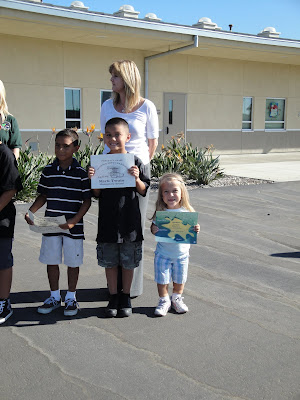 * Right after watching her get her award I headed over to the book fair room to help set up. Set up was pretty fun setting up diplays and sorting through goodies that our kids would be begging us for later. 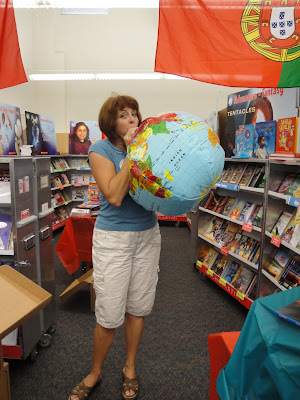 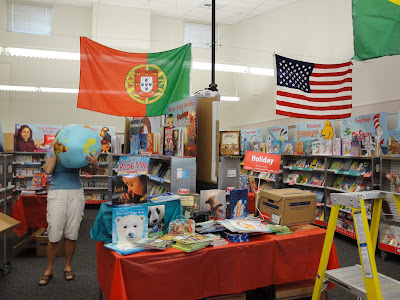 This week I had the opportunity to work at the book fair 3 times.

What did I Gain?

Retail experience, including how to tactfully tell a child that they can't afford the stack of things that they want to buy...

wet and sticky hands from counting all the change that was either tightly clutched into sweaty fists or dumped out of the bottom of purses filled with unwrapped candy, and who knows what else...

other than some money to buy my children what they wanted...

1/2 a toenail. It was stepped on by a student. I guess I should've worn my close toed shoes that I am alway sure to make my children wear :)

My favorite customer at the book fair was the boy that exclaimed "Tax?! I have to pay Tax?! But I'm not an adult!!!".

I laughed and told him "That's the privilege of living here."


* This week I had the opportunity to go and volunteer at the Bishop's storehouse. We got to fill truck orders for people that receive church assistance. It was a great opportunity to serve and we were able to sit and each lunch together at the end and talk about the earthquakes in Samoa with some of the Samoan volunteers.

* This week Jacob got to go to his first Court of Honor. He got his first rank advancement and his first patch for his shirt. Luckily we have a shirt swap in our ward so if there is one that fits we use the ones that are available. Jacob found one that fit him perfectly but he's running around with "Fletcher" sown on it :) 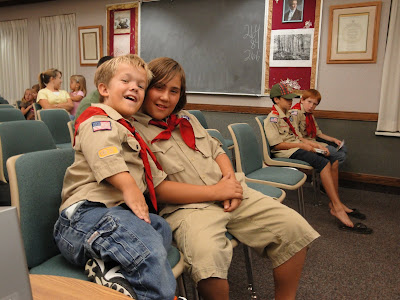 Taylor got a bunch of merit badges from scout camp. 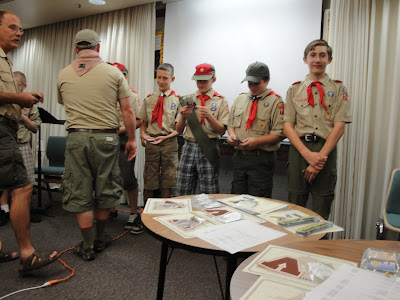 Then after the court of honor he had his Board of Review for his "Life" merit badge. He passed :) His goal is to get eagle by 14... 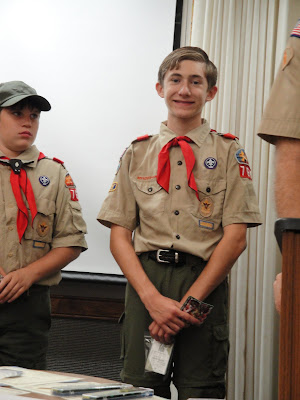 * This week Jacob had 2 soccer practices (as always) and a game today. We were so proud of Jacob. The team lost by one point (5 - 6) but Jacob played so well we didn't care about the score. He's not afraid to get in there and have the ball, and players, running right at him. He played consistently and even helped with a couple of assists. Way to go Jacob! 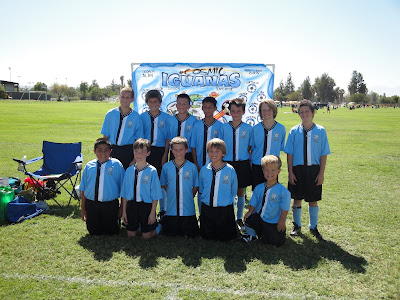 * Tonight Taylor got to go with Jeff to the priesthood session of conference and participate in the yearly tradition of dinner afterwards with Dale and Steve and their boys. He came home learning a new trick from his cousin Ian. When Ian did it in the restaurant it got a lot of attention so when Taylor got home he thought he'd try to see if he could do it too.

If I could describe it, it's basically two forks being held up by two toothpicks balanced end on end. 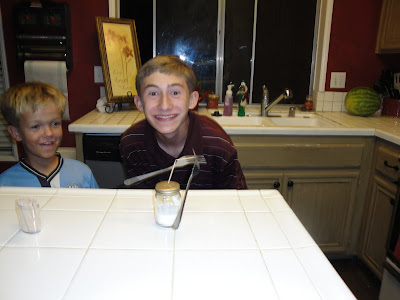 It looks impossible but if you get the weight distributed just right and work carefully you can get it to stay. 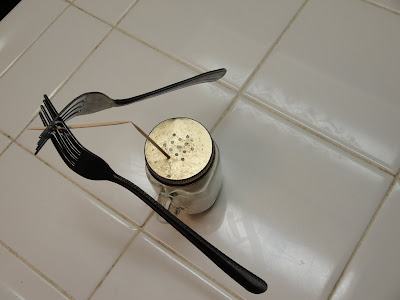 Crazy!!! It will be a good missionary trick for Ian :)

* And last but not least we had some fun tonight trying to get out our fall decorations while the boys were at the priesthood session...

I went into our shed and pulled out a box of our fall stuff from the very top. The box was kind of heavy but I got it down and set it on top of another box and looked inside to see what was in it.

I pulled out my fall table runner thinking that it had gotten dirty and then something caught my eye in the box. There was fur and what looked like a big rat tail. Immediately I tried to figure out what I would've had in the box that looked like that.

We had bought a fake crow for Halloween that looked pretty real but I didn't remember buying a rat.

I looked closer and pushed the box a little and realized it was a possum. Was is dead or playing dead?? 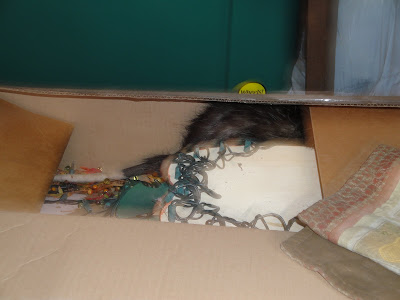 I pushed the box a little and it moved!!

We walked away and came back a couple of minutes later and he was poking his head out... 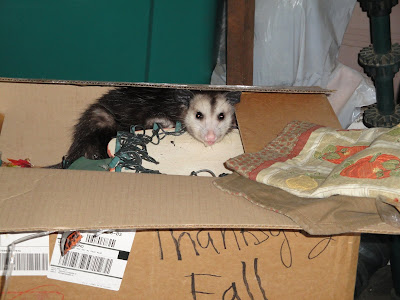 He was very cute but I know that they can be dangerous and aggressive if they feel threatened so we stayed back. I called animal control and they don't do anything, I accidently called a private trapper first who wanted to charge me $185 to trap him and $85 to relocate him. Yeah right.

I actually happen to ask a family who was packing up from the park if they had ever delt with a possum before and the one guy had a mom that ran a possum rescue place of all things.

He tried to transfer it into another box for me and take it to his mom's rescue but he escaped and ran up our tree, so he gave me his card in case we caught it again.

Needless to say our decorations didn't get up tonight. I'm not real excited to see what "other things" are lurking in the boxes in the shed.
Posted by Christine at 8:06 PM

Wow. I am amazed at your find in the boxes! Hopefully since our boxes are all inside the house we will not have any stowaways as I continue to unpack!! Also glad that nobody got hurt. :)