Our trip to San Francisco

My quick trip to San Francisco with Jeff was just what we needed right now in our crazy lives. It was a perfect way to re-connect and briefly focus on each other instead of everyone else.

Day 1 - Thursday I got the house ready to go, cooked dinner for Jenise to feed the kids that night and packed up our stuff and was out the door at 11:00am. At the airport we decided to carry on our luggage because we didn't want to pay the $15.00 per bag fee. This resulted in our luggage being strip searched for "liquid" contraband that was supposed to be displayed in see through baggies. Be warned that toothpaste is considered a liquid. 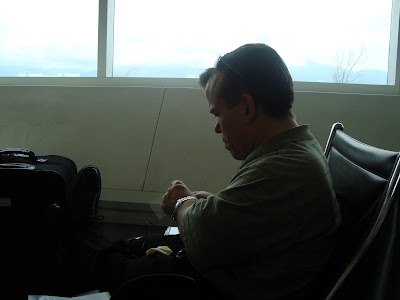 Instead of hanging out relaxing in our hotel that afternoon we spent almost 5 hours in an airport terminal waiting for our 1 hour flight because of weather delays. I read my book, Jeff tried to return some calls and organize some thoughts for his speech the next day and we hung out with the other passengers watching the rain roll in. 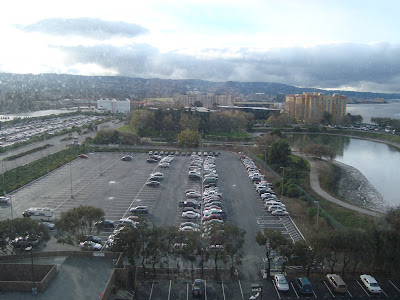 Here is the view from our hotel that we got to enjoy for about 1/2 hour before we were picked up for dinner at the district manager's house. 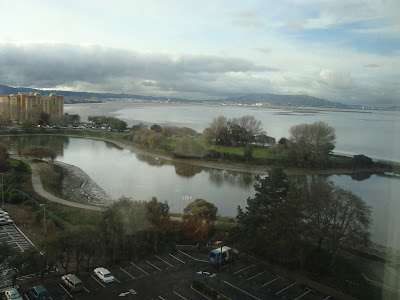 Dinner was mixing with a houseful of impeccably dressed strangers, trying to look like you fit in. (I was doubting my clothing choice a couple of times) Jeff and I had conversations with a variety of nice people and even had a little bit of an education in the difference between Mandarin and Cantonese. (This office was very diverse with agents representing 41 countries of origin).

After about 45 minutes of chatting in the house we realized that there was a full dinner offered outside. (We were starved by this point). Dinner was another cultural experience. I piled my plate without recognizing anything but the fact that it was Indian food. One lady kept extolling the virtues of the lamb ka-bobs gesturing to them. Jeff and I went to take her advice and serve ourselves off of a ka-bob but it was taken away from us as we were sliding it off the skewer. The man who took it away ended up being the cook who was saving us from walking away with the raw meat that we were piling on our plate. He had to bring us over to where the cooked ka-bobs were...so much for trying to be inconspicuous.

After dinner we went back to the hotel to let Jeff prepare for the next day.

Day 2 - Friday Jeff and I ate breakfast and got to hear Gerard Rocci speak at the kickoff meeting. Gerard is like the 3rd guy in command in the New York Life home office. 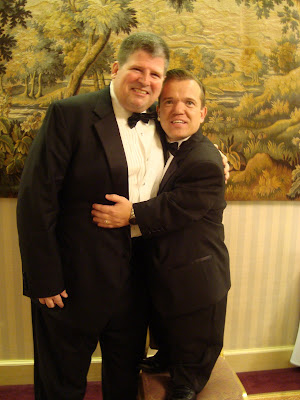 We first met Gerard in New York while Jeff was serving on the Agent's Advisory Committee, and instantly connected with him and his sweet wife. After hearing him speak we went back to the room where I could serve as audience for Jeff as he practiced.

Jeff's speech went great! I know he's always nervous but he always does well pulling it off. I don't normally get to hear him speak so it was nice for me to see him in action.

After he was done and we could breathe a sigh of relief we decided to venture out of the hotel and take the free shuttle to the little downtown area. 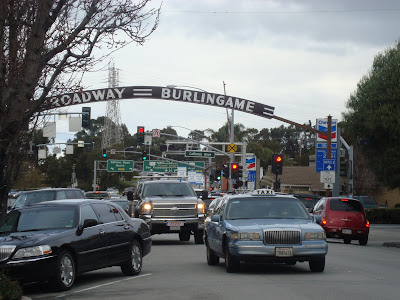 We got of at the first drop off point in the city to look for some lunch. Unfortunately we picked the more dead area not knowing what was around there. 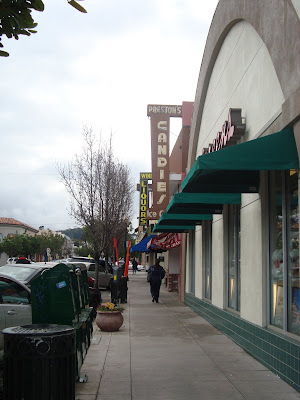 There was a lot of mom and pop dying businesses that we briefly looked at. We ate lunch at a cheap but odd-tasting Chinese restaurant. At this point Jeff was miserable due to a migraine that was getting worse by the minute. Our local pharmacy is out of his migraine medicine so he couldn't pick any up before our trip. We lucked out to find a Wallgreens (the one normal store there) that he could transfer his perscription to and get him medicine.

Done with our mini-downtown excursion we took the next shuttle back to our hotel to be pleasantly surprised with a thank you gift basket sent by KB (the district manager). 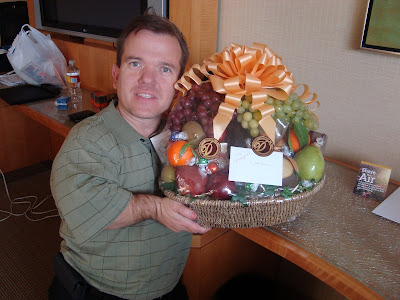 We ate some of the stuff and then got ready for our black-tie dinner. Here is Jeff and I going to our black tie dinner. I had to wear the black dress by default since Nordstroms didn't take the electronic tag off the blue one and I didn't have time to go back to remove it. 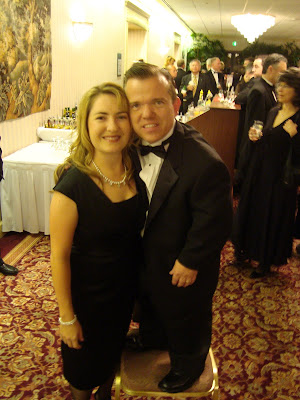 We were treated like honored guests that night and got to sit at the head table with the big boys. (I could get used to this) People constantly were telling Jeff what a great job he did and how much they appreciated his talk. They brought their wives and friends over to meet us and get pictures. Even the top agents in the office were very nice and down to earth and wanted their picture taken. 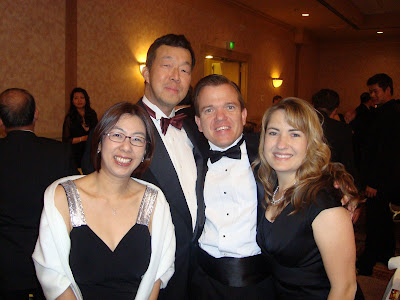 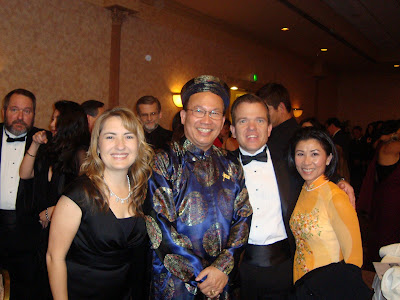 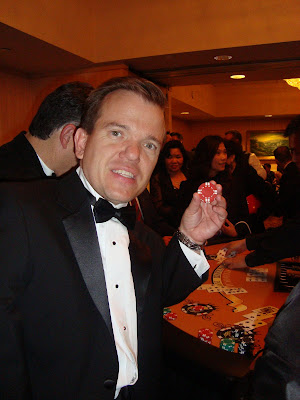 I left Jeff at about 11:00 to go back to relax in the room. He was having fun playing pretend blackjack but since I wasn't participating (no desire) I was stuck talking to the various people about their own family challenges. People who wanted to arrange for us to come meet their autistic son, or speak at their school. I got offers to come back up and stay at someones home so their children could have a chance to meet Jeff even though she warned me that her child would say rude things about him. (I think the last lady was a little tipsy.) I had some empathy for Jeff's daily life and honestly I was glad to escape and get some peace and quiet.

Day 3 - With all of our obligations taken care of we had a few hours to ourselves. We decided to eat breakfast and check out of our room early so we could take the shuttle to the airport and then the BART into downtown to avoid a $50.00 one way taxi fee. We bit the bullet and paid to have our bags checked at the airport and started on our way to downtown on the BART. 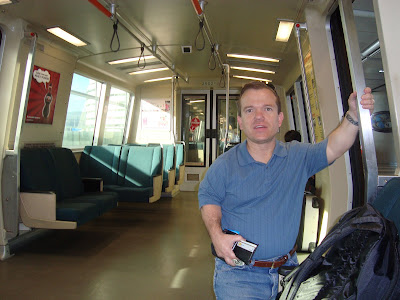 When we got off in downtown we were at the end of the trolley line that could take us to fisherman's warf. It was fascinating to watch how they turn the trolley around to start it back on it's way to the pier. 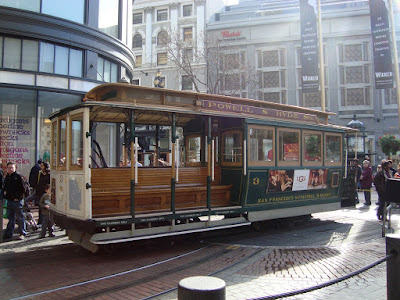 They did it old school style with someone manually pushing it on the turnstile until it was in position and then pushing it back onto the tracks. On the way down to the pier we stood in the back and were amazed as the operator wrestles with a brake by hand to slow the trolley as it's descending down the hills. Here's the hardworking Trolley operator we got to know on the way down. 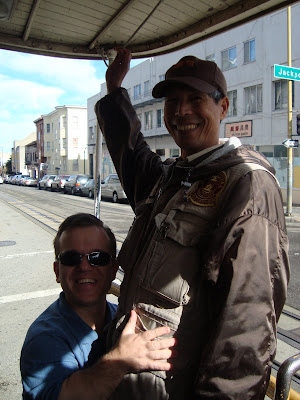 Once we made it to Fisherman's wharf we had 2 hours to enjoy as much as we could before we had to head back. It was just enough time to pick up a couple of T-shirts, eat lunch and walk in a few shops and of course take some pictures. 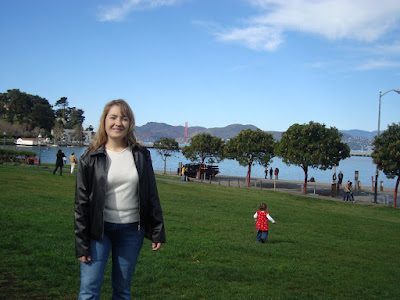 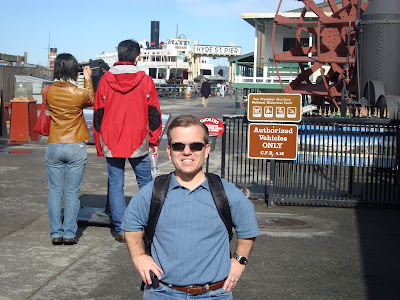 As we were walking along we had to check out the live crabs...crazy. 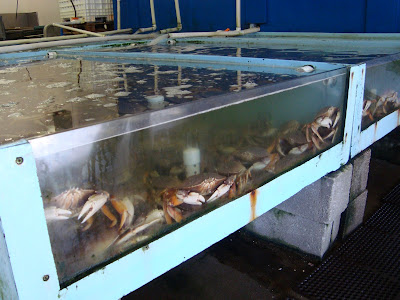 Later on when deciding what we wanted for lunch Jeff ended up eating steamed crab. Yum. Even though I was a little squeamish eating it after just seeing them alive I have to admit it wasn't bad. 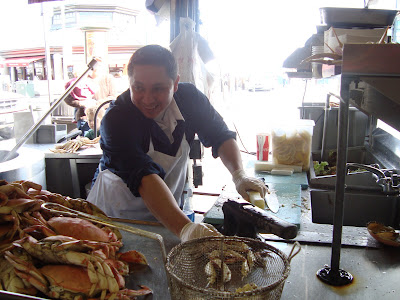 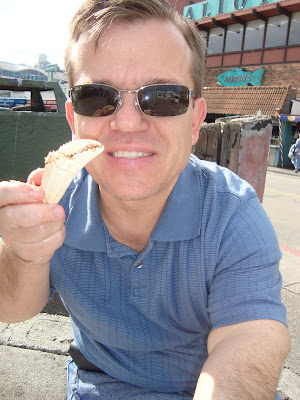 For my lunch I couldn't pass up a clam chowder bread bowl. We got Taylor hooked on them when we took the kids to San Francisco a couple of summers ago so we went by the sourdough bakery and bought a loaf to share with the kids. We had clam chowder in a big bread bowl family style for Sunday lunch the next day:0) 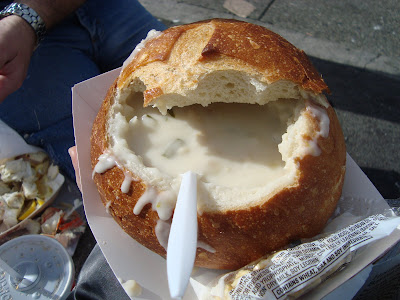 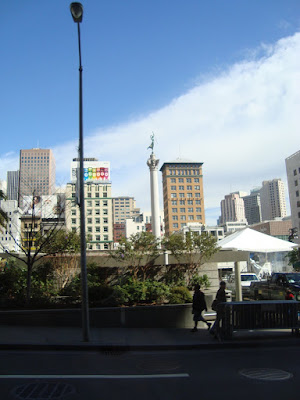 After lunch and a couple hurried T-shirt purchases we headed back on the trolley, back on the BART and to the airport to wait for our flight home, (with no delays). When we got to Riverside we couldn't find our bags anywhere. We watched the lone snowboard going around and around in circles uncollected while we looked for an agent. After about 40 minutes we found a lone person who could help us. Our bags were locked in the office because they had sent them on an earlier flight. (We checked them early when we went into the city). We got home to find inspection notices again in both of them. I wonder what they thought of the cheese, crackers and fruit from the gift basket that was throughout our suitcases:)

We got home to find the home standing, the kids happy and Jenise and Sean and the kids all playing Rock Back together upstairs. Thanks Jenise
Posted by Christine at 9:13 AM

Looks like you had a great time. I think it's one of those cities where you can see a lot of things in a short time period.

Christine-
Love the pictures...it seems you two never get to really relax. :)

It's fun to see how proud you are of Jeff, "way to go Jeff!" I'm impressed!

Christine, you are so pretty!!! Bummer about the blue dress though. Maybe Jeff will just have to take you out on the town to use it.

Looks like a fun trip!!! Glad you guys got to go away for a couple of days.

I can't believe all the travel mishaps you have had to deal with in your lifetime! You are so good at keeping up on your blog, I think I had to read back three pages worth! Love the videos!

LOVE SF it is always a great place to go! Such a romantic city. Looks like you guys did a lot in a little time. Great job Jeff and you look amazing Christine, love the dress:)

You both look great! Glad Jeff did a great job on his speech and you had a great time--getaways are the best!

Love the pics. Looks like you had fun. I hoped Jeff took you out on the town again, so you can wear that blue dress. Did you two get a chance to relax a little? It is nice to get away from the everyday task and have no children. :)