I haven't had time to sit down and update my blog so I have some catching up to do. 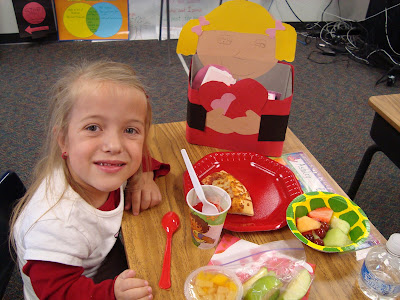 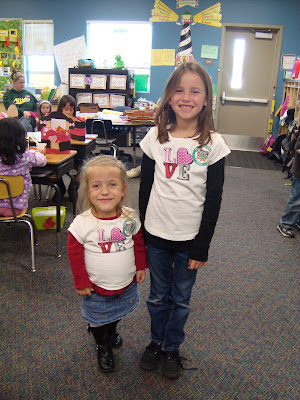 I know that Valentine's day is done and over but I had to share and idea that worked good for their party and I'll probably use again. Ashley's teacher wanted healthy snacks so I brought in fruit kabobs. A couple of kids didn’t want them but overall they were a big hit because they were novel and because there wasn’t a lot of fruit on them they ate all of it. All of them were gone by the time the party was over even though there was still a lot of other fruit left over. Jacob said "It tastes better on a stick" I'll have to remember that:) 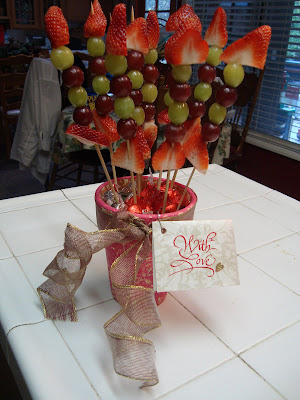 I took the idea and went a little farther that weekend and made fruit bouquets to bring to 2 of Jeff’s hometeaching families. I recycled pots that were given to me for other things. If I would've had more pots I could've give more out. 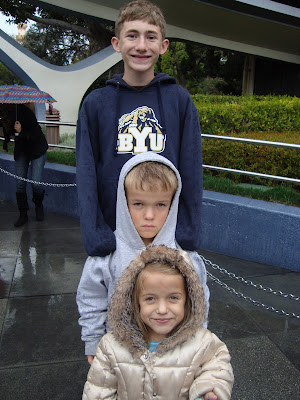 On Friday the kids had a day off of school. I brought them to Disneyland that day because it was the last day our cheapy passes would let the kids go during a day off of school. It was a lot of fun until it started to rain on us. Then it wasn’t as fun. We were thinking about having Jeff join us but the kids were done at 5:00 so we told him not to bother. Then we got caught in 2 ½ hours of traffic coming home (remind me never to miss the carpool lane on a Friday). The good thing was I got the special assistance pass for Jacob and we were able to get through all the rides the kids wanted to on the Disneyland side, including Jacob's first time riding Indiana Jones! I've lost count how many times we've measured him and tried to go on that ride and they reject him and send him away by the time he gets to the front. This time I had them measure him twice up front before we all went in. By the time he got on the ride he had been stopped and measure 6 times and then let through. My goodness I guess they are serious about this ride. 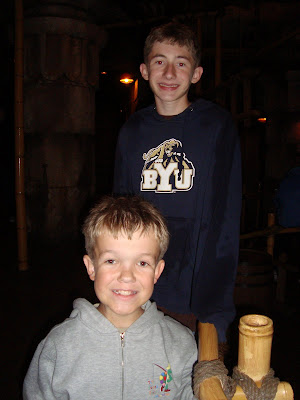 Monday the kids had a day off school but because of the rain and the fact that 1/2 the family was getting over a cold we were limited on options. We ended up going to the movies with cousins and hanging out at home. It was actually nice not running all over that day.

So on Tuesday I had to catch up on all the things that didn't get done when the kids were off of school. I had every inch of counter space covered with home-made pizzas for our freezer meal swap later in the week, I had loads and loads of laundry, housecleaning and more. 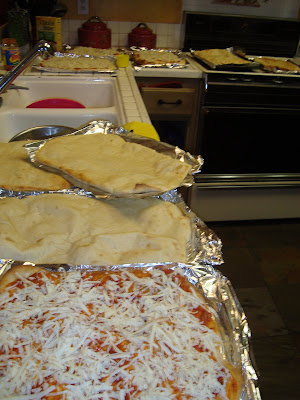 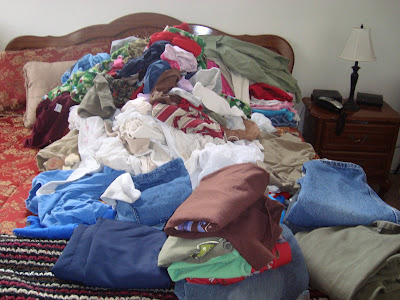 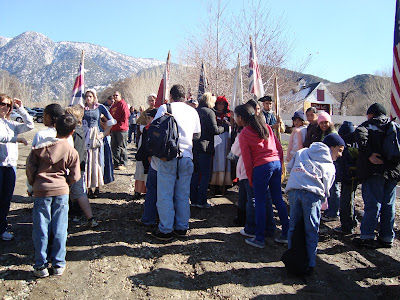 On Thursday I got to go with Jacob's class to their field trip to Riley's farm. 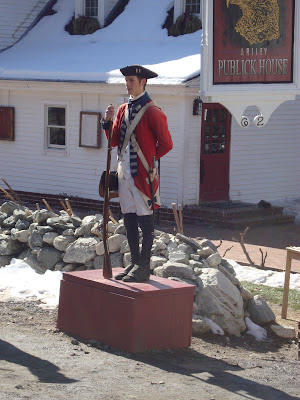 Here is Jacob with his "musket" learning how to load and fire it. 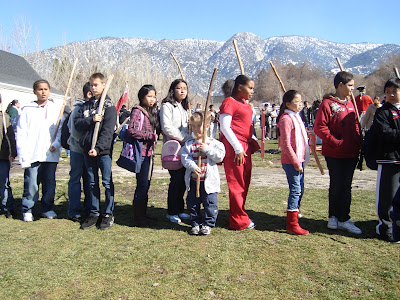 While he was there Jacob got to learn the proper way to greet a lady, write with and ink quill, grind wheat into flour, he learned about the stamp act and some of the other things that drove the colonists to war with England. 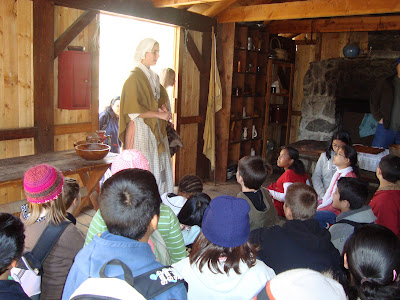 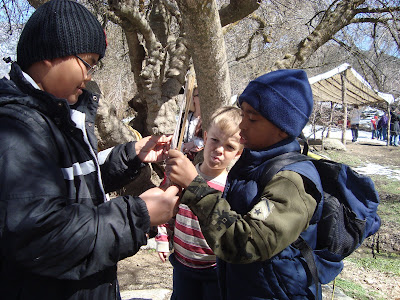 In the end they got to all stage a mock battle with the Brittish regulars against the colonist with the colonists winning their independence (of course). 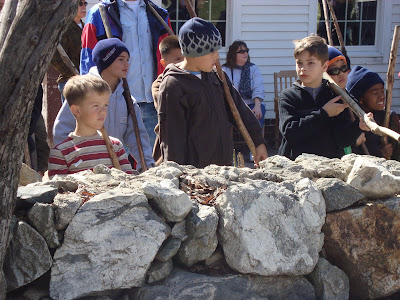 Jacob was lucky that he got to be a colonist because all the Brittish had to fall and play dead on the feild and it was pretty wet and muddy at the time. The snow was fun for the kids and not fun. They liked it but they weren't allowed to play in it, with it or even stamp on it. It was only good for making our feet cold. We couldn't complain though because the rest of the weather was beautiful. 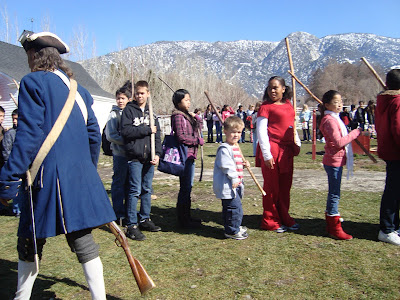 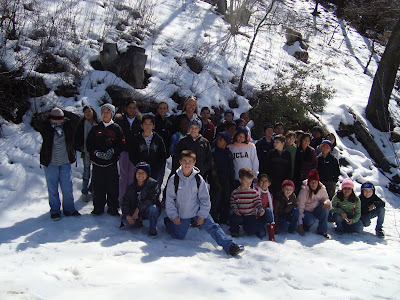 I'm not really sure I got anything for the $12.00 I had to pay (no ride, no food, no participation) but Jacob said he was glad I was there. I think my purpose was to carry his lunch and jacket around and hand him money for souvineers. It was nice to watch what they were able to experience though. I think that they did a good job of bringing history alive for them.
Posted by Christine at 10:04 AM

I'm right there with you on the laundry thing. Except all mine is on the floor of my bedroom! The Riley's fieldtrip looks like it was a good one. Hopefully you're all caught up now :)

My gosh that was a fun post to read! I love the whole musket thing. Matt and I just watched Gettysburg. I love this country! Anyway, sounds like they really did give you guys a hard time on that ride. Hope he enjoyed it. :)
Loved the pictures!

Fun idea for the party...I wonder if the skewers would be too dangerous for preschoolers?:) I like the frozen pizza for your meal exchange. I need to get the recipe...I am doing an exchange as well.

I love reading all the things you and the kids do, you are so good about taking pictures of everything. I love the look on Jacobs face in the Disneyland picture. (I think it say's DONE) hehehe

The pizza is too easy. I use the refrigerated pizza dough from Fresh-n-Easy for the crust (I also have used Rhodes frozen bread dough, or bread dough from my bread maker)I use Ragu pizza sauce, cheese and whatever toppings the family wants. Not too "homemade" but they like it.

I love the fruit on a stick idea:) You are so busy you need to take a spa day or something!

The freezer swap is such a good idea. Except did you collect everyone's pans to use? That is a ton of cookie sheets. I also will have to use the fruit skewer idea for our school next year. Very wise.

I only used my own cookie sheets to cook the crust, then I wrapped them all in foil. Meal swaps are fun for when you don't want to have to think about cooking:)