March 2020 - Entering Covid Quarantine and the world turned upside down

Who knew that a week after dad's funeral we would start a temporary lockdown that turned into a longer temporary lockdown...that is still continuing to a point as I write this.
The world felt like it was turning upside down as more and more of what was considered normal was being converted to what eventually became a new normal.
I drew this picture representing my 2020 new years resolution...my mantra to have hope and to allow hope to rise above whatever I was going through. I never knew how timely or needed this would be. 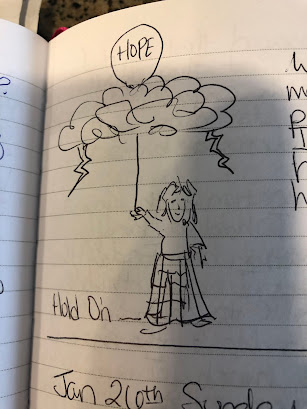 Ashley never got to go to what ended up being her last day of school ever. She was sick that day and after school we found out that she wouldn't be coming back...they didn't know how long but for now final's week was postponed and how school would finish nobody knew at the moment.
Jacob drove back from Idaho when the campus shut down and everything, including his job went on-line. Taylor was living in LA and everything went on lockdown and it was hard to get food and his job went on-line and his lab was closed so he moved back home. Taylor Rose also moved into the guest room so we had a houseful.
The stores were starting to run out of food as people started to go into panic mode. So we took stock of our food storage as we prepared for what might be a long visit with feeding family with unknown food supplies. Luckily we had cans and cans of staples stockpiled in case we needed it. 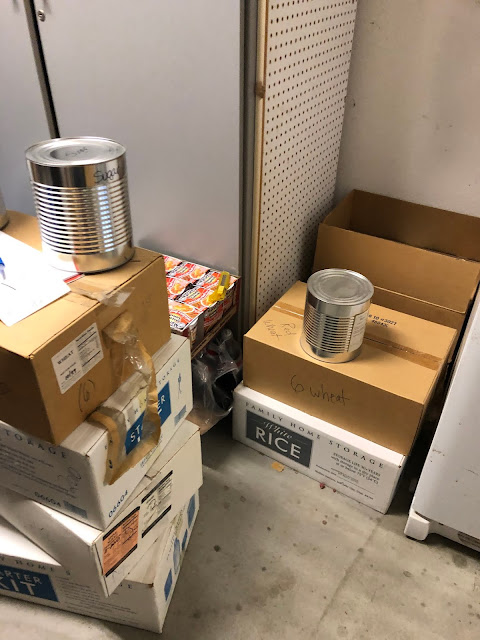 When we started quarantining there was a lot of rain so we just stayed in the house a lot but when it got sunny we took the opportunity to meet up with Jolene and Delilah and take a hike in Sycamore Canyon.  Later on they closed the trails as well as everything that was considered non-essential (clothing stores, malls, amusement parks, churches and anything that promoted the gathering of people)
It was nice to be outside during the fear and uncertainty we were living in.
Taylor is helping Ashley jump over the mud puddles. 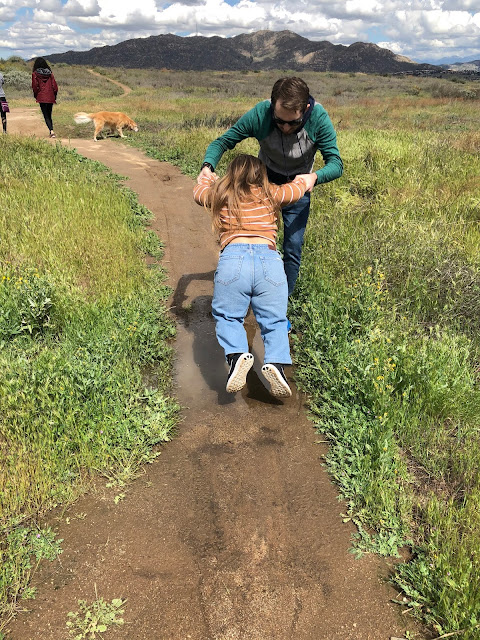 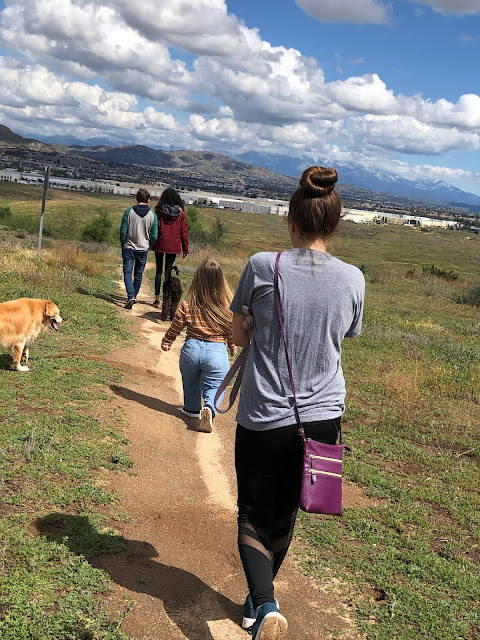 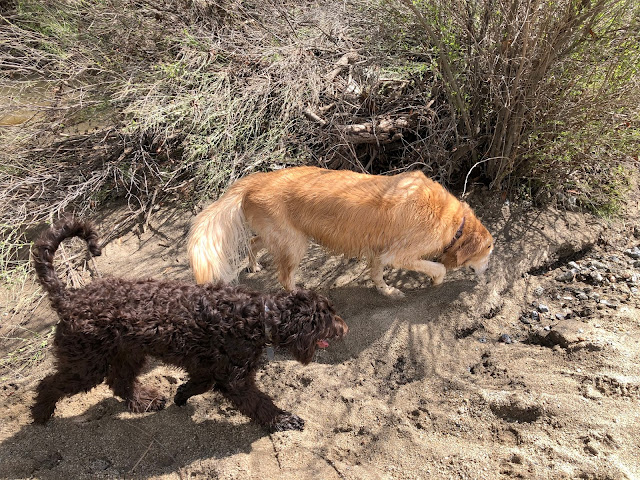 We got a visit from Jared, Vanessa and their cute family including their newest daughter, so sweet! 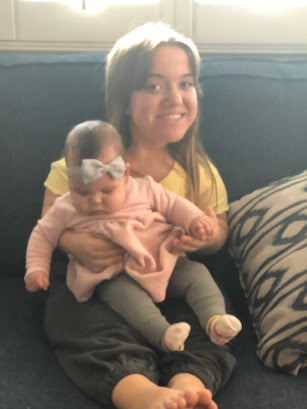 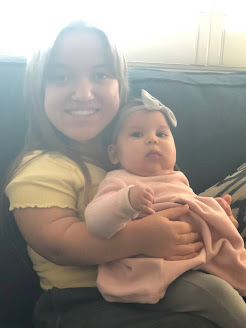 During quarantine I learned how to participate in a zoom meeting. All our church services went to zoom and every Sunday we log in for a zoom devotional and then we do sacrament meeting her at home. A boy in our ward even started selling sacrament trays using his 3d printer and its been very useful.
I just got called to be Stake Relief Society president. I was sustained while I was at my dad's funeral and set apart the week before the shutdown. I was supposed to speak at Stake Conference but we never had it. So our presidency has been doing remote zoom meetings, emails to wards and trying to be creative while supporting the members at the same time.

My project for the next few months was sewing, selling a little and donating lots and lots of masks!
I had the idea as my friend Penny Smith was going to start chemo and was worried about Covid. I had seen that people were making masks so I researched it and tried out a pattern and came up with some prototypes. 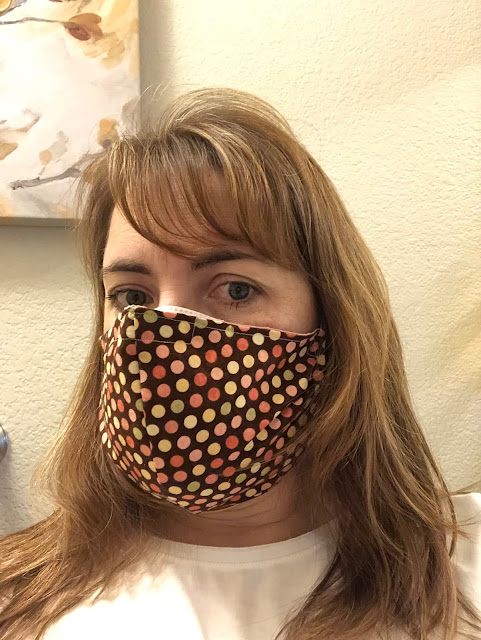 Material was hard to come by so I put out a request to the community through Facebook and I was overwhelmed with donations of fabric that I couldn't buy at the time. I bought some but it went fast and it ended up becoming more and more elusive. 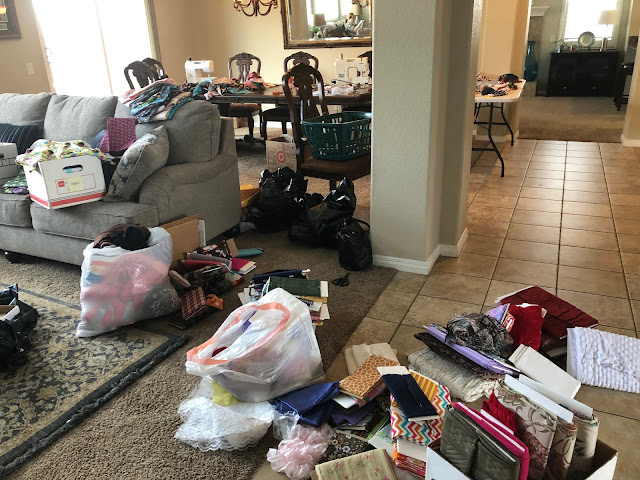 I joined with other sewers and made hundreds and hundreds of masks to give away. I took donations to help with supplies if people wanted to donate but the majority I gave away for free. I gave them to nurses, nursing home, first responders, immunocompromised, foster families and just regular people.
More than once Virginia came out and stayed the day and we sewed together. I felt like I was running a sweatshop some days, ha ha. 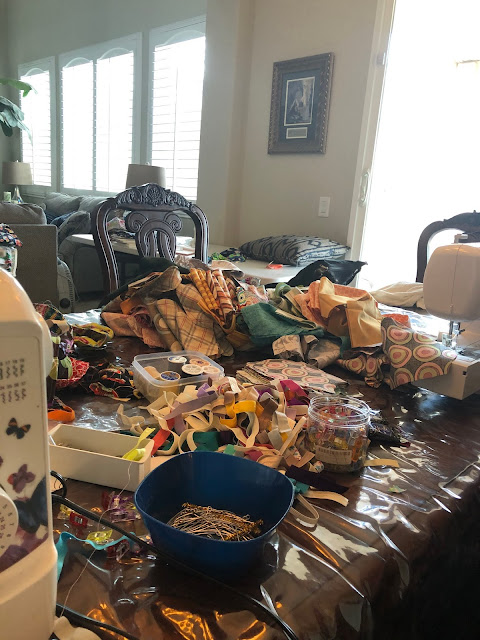 I had a bucket outside that I would put my orders in for people to pickup. A few people were sweet enough to give me some nice things in return which was very thoughtful and made it all worthwhile! 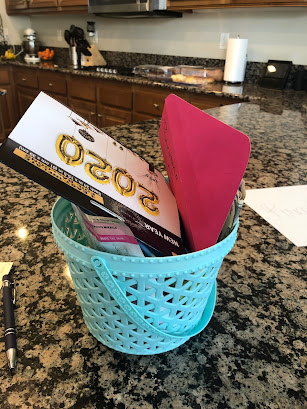 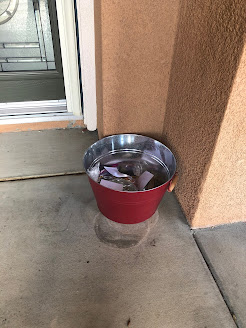 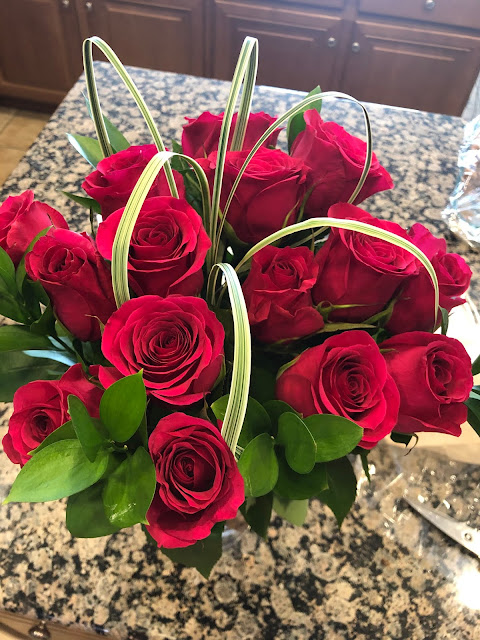 One of the positive things from having everyone at home is having more family fun time. We've been playing games and watching movies in the evening and enjoying our time together. There is a lot of cooking going on but every night feels like Sunday dinner and we have had some great time getting to know each other better. 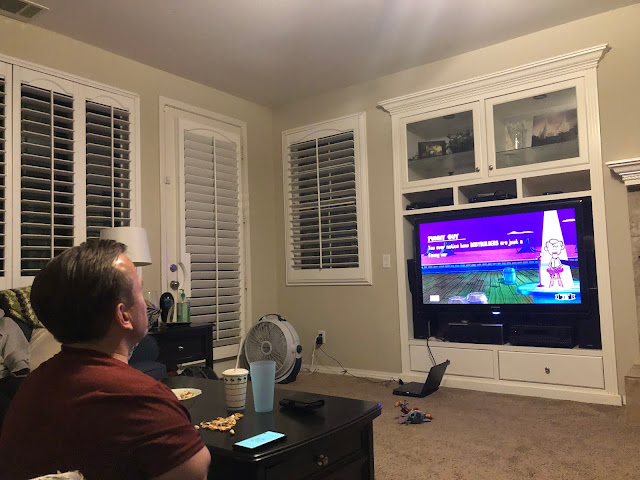 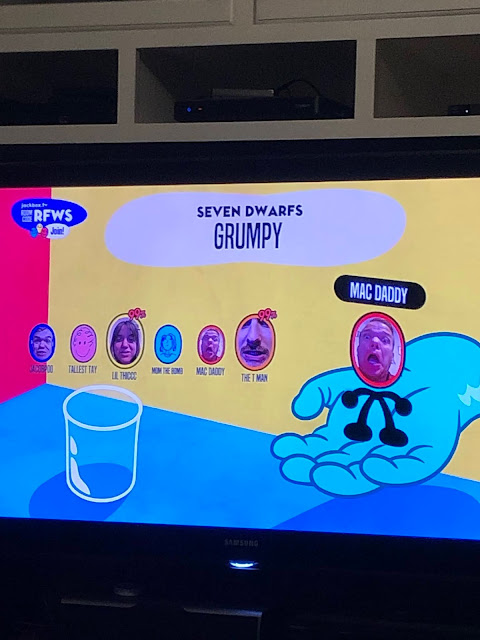 We've done more baking that normal and one night Taylor Rose and Ashley made yummy funnel cakes for dessert. 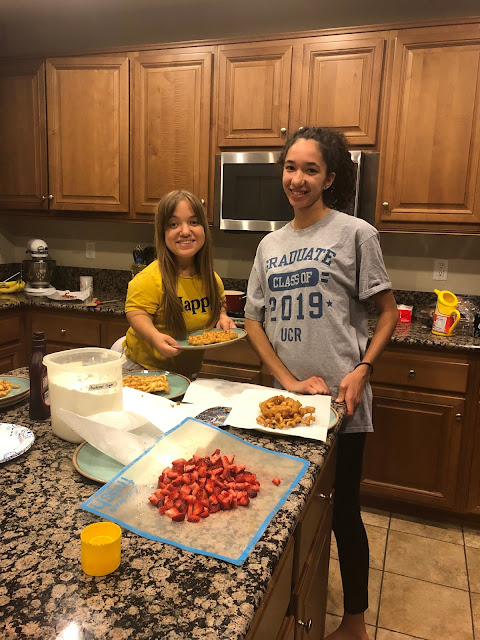 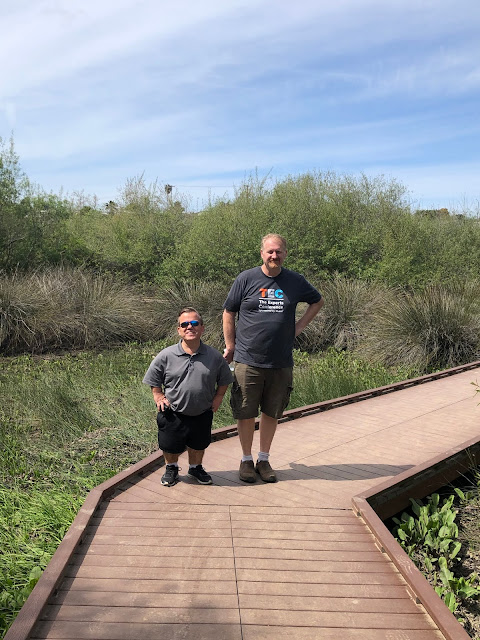 They have this great place to hike near their house. The parking lot was closed but people were on the trail so we went anyway. 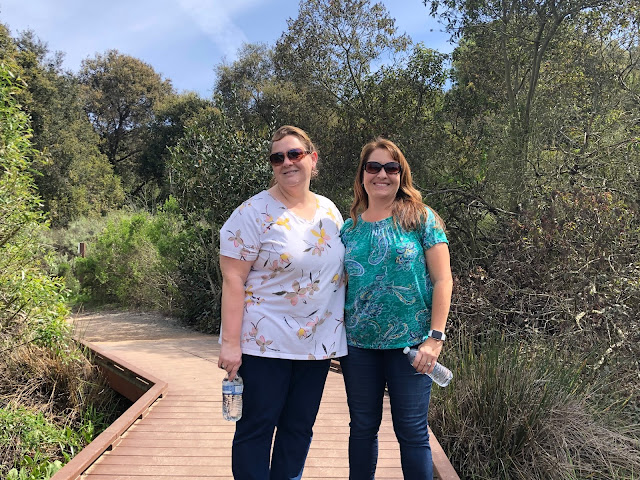 Beautiful and just what we needed. 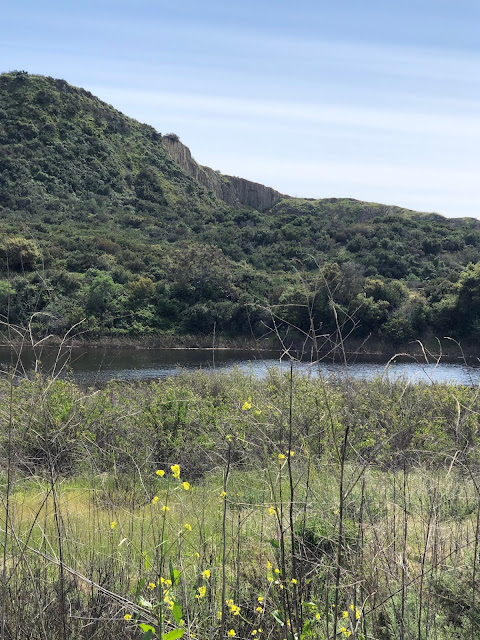 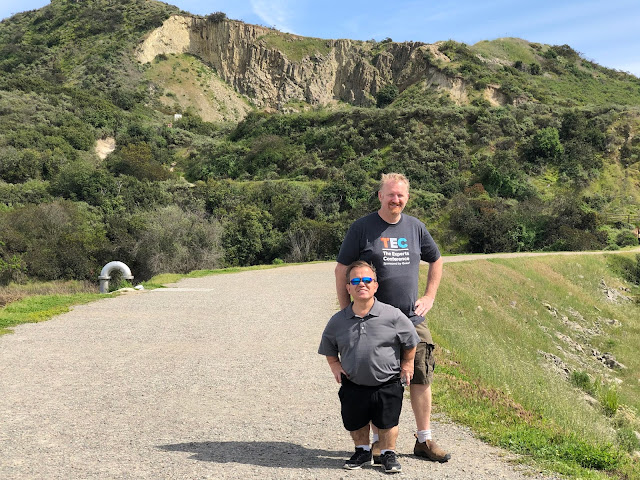 We haven't been able to see family in a long time so I liked this picture that Cheri sent me. Her boys are getting so big! 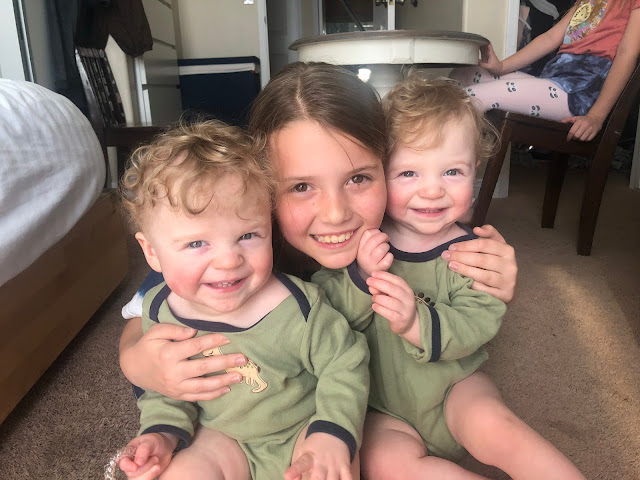 I helped a couple of organizations with sewing masks....masks....and more masks.... 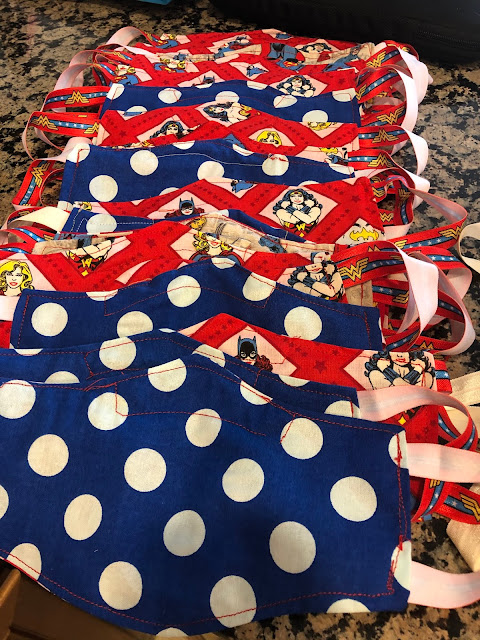 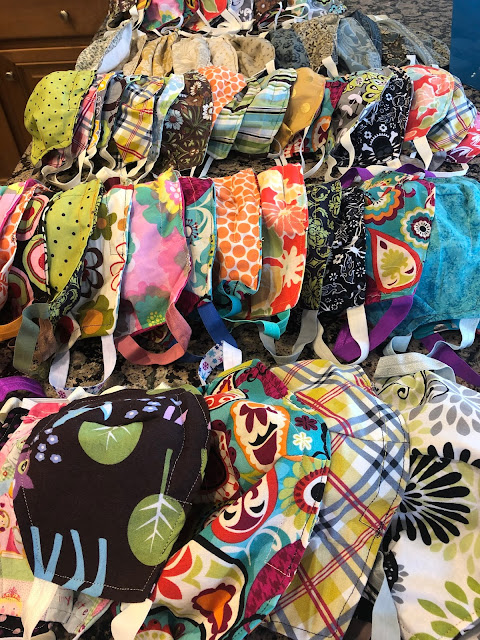 I sewed so many I broke two machines and had to borrow one from my secretary to continue sewing!!
Posted by Christine at 8:51 AM