This last week I was gone every day either subbing or volunteering so I wasn't able to update the blog. Sleeping in on a Saturday morning after a busy week is blissful and waking up before the rest of the family to update the blog is even better :)

Last Friday I had the chance to go to the family fun day at Ashley's school. Parents can come on campus and eat lunch with their students. Ashley put in her request "Wendy's kids meal" OK so I brought it for her and she ate every bit of it.

She then invited Kyra to sit with us. Kyra is from Mexico and just got here a month or two ago so she doesn't know any English. Ashley has made it a point to be a friend with her even though they can't communicate much. It amazed me as they were putting stickers on her kids meal airplane (she's holding in her hand) and enjoying each other's company they communicated without talking. Every so often Ashley points to something and asks Kyra what the word is in Spanish but mainly you can tell they are trying hard to be friends and eventually the words will come later. 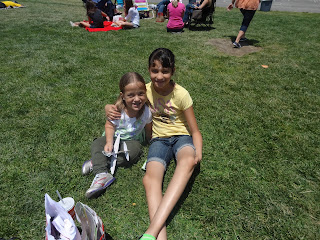 Saturday the boys were at Lake Perris for the Father's and Sons campout. That day was also the air show at March Airfield. I had been hearing them practice for the few days before. They flybys were impressive and loud! One day I was driving home on the freeway and everyone had slowed to a crawl to watch the aerobatics. Cars were pulling off to film it on their phones and I was late picking up Ashley from school because the traffic was so bad.

Since the boys came back from their camping mid-airshow and were tired just Jeff and Ashley and I drove over to a dirt area across from the Airfield to watch the planes without getting stuck in the crowds. We came for the Thunderbirds finale which was running about 40 minutes behind. 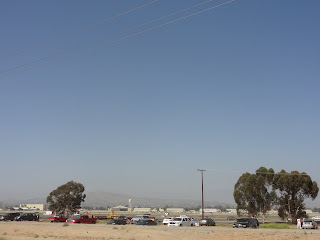 Luckily we had friends over in the thick of the airshow we called and asked what was going on. They let us know when it was happening so we stayed long enough to see the Thunderbirds.

It's really hard to get pictures of fast moving airplanes...and try to watch them at the same time....they are way in the distance. 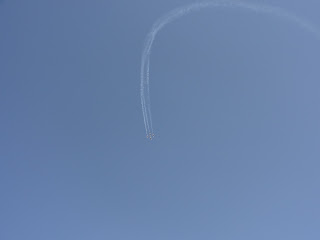 This is the best shot I got...and it isn't centered but at least they are in the frame ;) 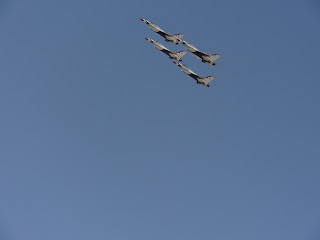 Jacob was home perfecting the finishing touches on his own high flying contraption. He had to build a bottle rocket that could stay up in the air for at least 7.5 seconds to get an A. If it fell out of the sky faster than that your grade went down.

We took it seriously so we looked at on-line tutorials. We cut up a perfectly good file folder to get the right materials for the wing, and we experimented with the weight for the nose cone...which wasn't right at  first. Jacob had the idea to use play-doe plugged into 1/2 of an Easter egg to weight the nose cone correctly which ended up working.

The day of the launch came and went. Jacob said pretty much the whole class had rockets that stayed up for 4 seconds and they got a C.

His rocket stayed up for 7.02 seconds...which was an A minus. Way to go Jacob. 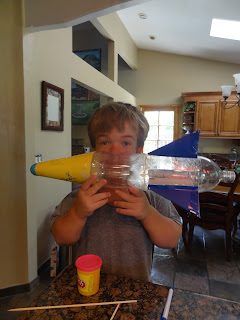 Tuesday for mutual night was the annual trip to Lake Perris for the combined activity. Here are 3 of the Laurels I get to teach on Sunday Emily, Gloria and Sierra. Love all my Laurels and I'm sad that some of them are graduating soon and moving on! 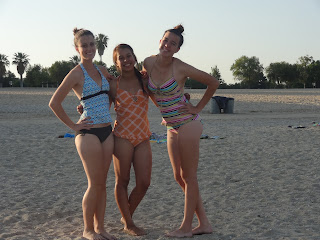 Luckily the night was warm and even Ashley liked playing in the water. 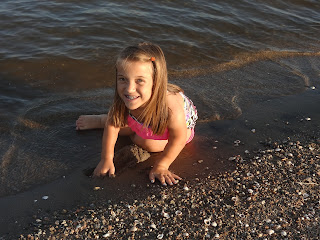 I don't think Jen was prepared for how much Porter would like the water. He wanted to be in it and he wanted to eat the sand. Once he got a taste of it he wouldn't stop putting it in his mouth. I think Jen is still waiting to see if he gets any kind of intestinal malady from the questionable water from the lake. 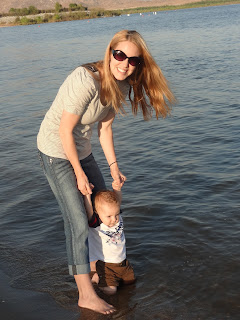 Jeff was the grill master....the whole time he was cooking hot dogs for everyone. 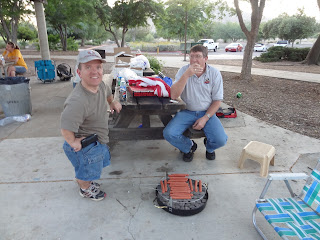 The boys had fun even though some of them were just here a couple of days before for Father's and Sons. 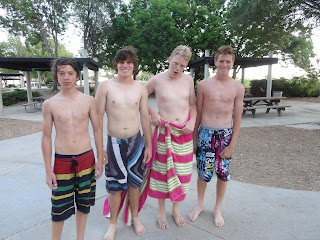 The most fun part was the boating. There were two generous dads that brought their boats so the kids could go inter tubing. Jacob had his first experience intertubing!! Taylor went with him and practically held him on but they had a lot of fun! 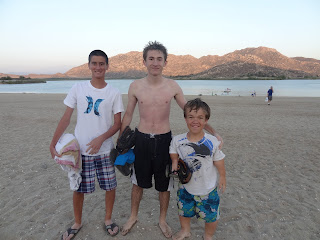 Jeff said everyone went through every last one of the hot dogs! 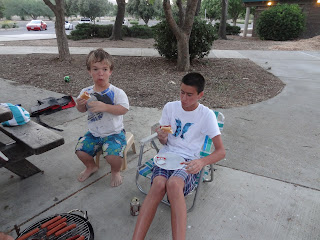 This week I got to substitute for Ashley's class. The nice thing about that was I was able to plan for my end of the year gift for her teacher. I took pictures of all the students and tried having them write her letters and draw her a picture.

Well the class had been going good for the first part of the day, I was even telling Jeff at lunch how well it was going...but after lunch....good luck getting them to do anything. I think it's kinda that time of year.  I got less than 1/2 of the letters and I'm worried I'll never get the rest.

Ashley told me that even their teacher had a hard time getting them to do work a lot of time and she said they were better for me that morning than they normally are for subs. OK that made me feel better. 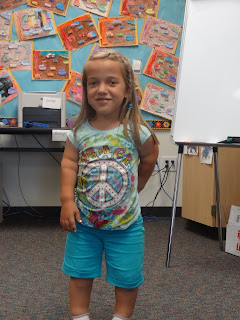 Jacob had an awards ceremony this Thursday and received honors for having good grades while he was at Middle School! So proud of him. He got a lanyard and a pin that he can wear at his 8th grade promotion. Can't believe thats coming up soon. We will officially have another high schooler next year! 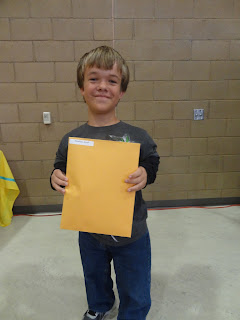 Friday we were back to Lake Perris again!. 3 times in one week for Jacob!

This trip was his 8th grade end of the year picnic...and it happened to be the coldest, windiest day in the last few weeks. I was cold with pants and a jacket on. I could only imagine how cold the 8th graders were in their shorts and bathing suits. 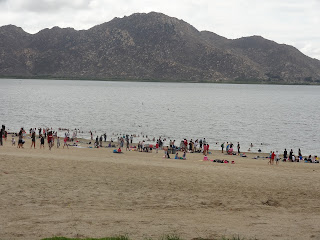 There were plenty of them in the water...they said the water was warmer than the air....the problem was coming out of the water and being in the cold wind again.

Nobody complained much but the goosebumps gave them away.

I asked Jacob if he wanted a sweatshirt before we left the house in the morning and he refused. The kid never gets cold so I didn't worry about it. I asked him later if he would've like a sweatshirt he said "Yeah. I didn't know it would be THAT cold"  I know he must've been really cold to admit that ;) 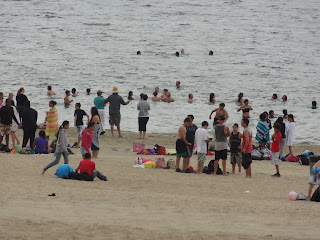 I was helping pass out food that day. The PTA president really outdid herself. There were millions of donuts and cut up oranges for breakfast for the students, chips and cookies and water bottles for snacks, a cotton candy machine (you can see the long line in the back) and a Carl's Junior truck for lunch! 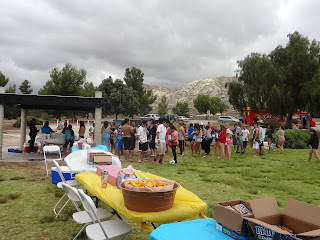 I jumped in wherever I could passing out food, answering questions and filling drinks for lunch. The donuts were whittled down until there were just coconut....then kids came and looked at them and said "I've never eaten coconut before" shrugged their shoulders and tried it. Donuts and cotton candy were the most popular snacks of the day. 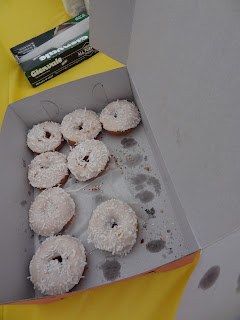 I got a few glimpses of Jacob as he wandered from group to group saying hi to people. He barely acknowledged my presence...in fact I didn't see the acknowledgement. I kind of got after him for not even saying Hi. Supposedly he said he did...must have been a wave when my back was turned ;( 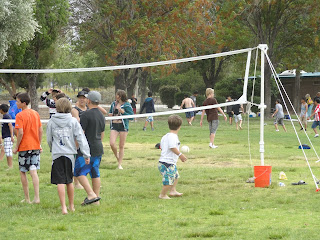 The longest he was in one spot was getting his cotton candy.

Even though it was cold I think they all had fun. 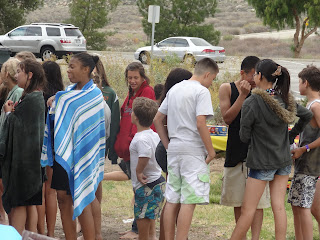 From lake Perris I jetted over to Ashley's school to help put on the end of the year pizza party for 100 mile club. I am one of the 4th grade parent coaches for this year and its been great but busy the last little bit so I'm actually kind of relieved its done.

There were tons of oranges left from the 8th grade picnic so they sent some with me to the elementary school. The bag was so heavy I couldn't even lift it! There was enough for the whole party, with 2nd and 3rds and more for whoever wanted it. I passed off part of them and I still have 3 big bags in the fridge!

I couldn't believe how many 100 mile club students their were that had earned their shirts! So fun! 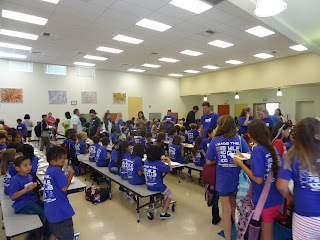 Ashley didn't make it to 100 miles but she did make it to 75. She got her last lap the last day possible. She was home sick that day and I had to drive her 1/2 hour away to the last 100 mile club event that evening so she could get her last 1/2 mile in because she wanted to finish.

She did get a spirit award for always trying her personal best and having a good attitude. Proud of you Ashley. (At least she isn't embarrassed that I'm there ;) 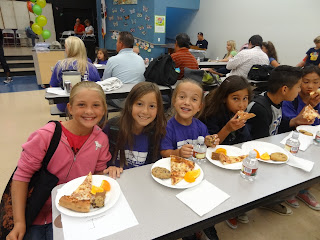 Some of my favorite boys ;)  Lance and Trevon are in the ward and I love subbing their class. 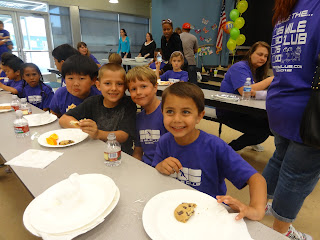 While we were doing the awards for the students that made their 100 miles my phone was ringing. I didn't recognize the number and the auditorium was so loud I could'nt hear anything anyway. I checked the voice mail and there was nothing.

Come to find out Jacob couldn't find his carpool and he was stranded at the school after the field trip. He borrowed someone's phone (because he never remembers to bring his) but didn't leave me a message. 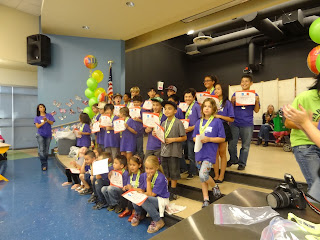 Since I had no way to call him back...or even knew it was him calling he had to figure it out. He found a friend to get a ride home with and then called me when he got home to tell me he was there OK. Hmmm maybe he is growing up.

Posted by Christine at 8:41 AM