Today was our free day in New York and our last day here. I started getting texts from home for things that needed to be done when I got back so real life was creeping in but for one more day I thought I would enjoy.

I went to the Metropolitan Museum of Art.

This is my 3rd time being there and I love it. 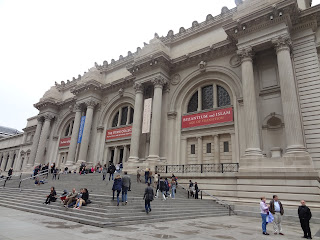 I am alone here....not everyone loves it.

Thats OK I just went at my own pace and have taken pictures of some of the things I thought were the most odd or interesting. 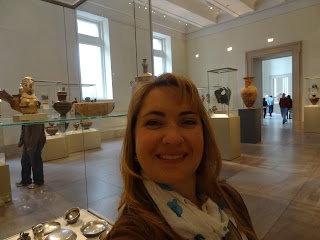 In the ancient Greek section I thought these perfume bottles were odd....who would want to pull their perfume out of a severed foot...makes you wonder what the perfume smelled like??? 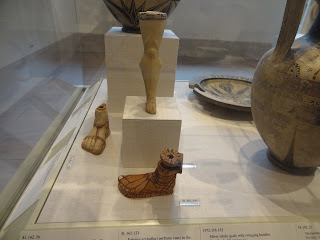 This was a giant safety pin to help keep all those robes together. This thing was big enough it would've covered my whole shoulder...interesting. 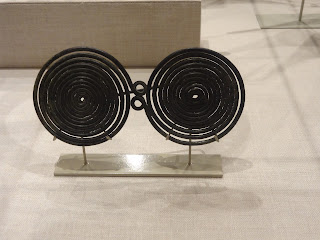 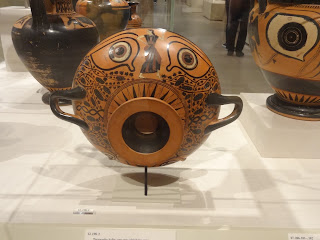 Proof that not every subject of Greek statues were beautiful, young men and women...this was one of an old lady who wasn't so attractive. 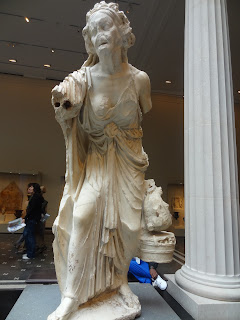 I loved this Roman room that was brought to the museum just as it was originally. The painting on the wall was fascinating. 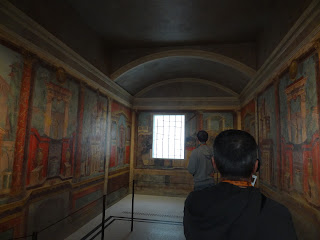 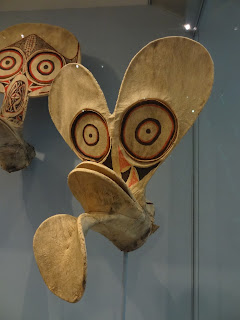 and these poles which were about 12 feet tall and carved for celebrations where the people who died in the tribe were remembered.  They kind of looked like people coming out of people, on top of people and signified their posterity. 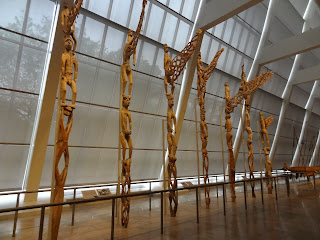 These earrings came from South America. There was no back to them, the big rod would just poke through your ear and then hit your neck to keep it in place. You can't tell but these were very large and looked uncomfortable! 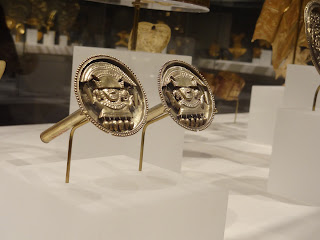 My favorite were the entire rooms that were arranged as they would have been in their original country and time. Instead of individual pieces you can see more how they fit in with how people lived at the time. 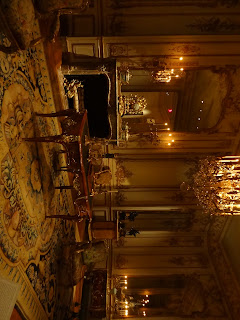 This rosary had 1/2 a man's face and 1/2 a skull on one end and then goes through his whole life and has a 1/2 of his face and skull on the other end. I guess so he can remember how close death is at all times??? 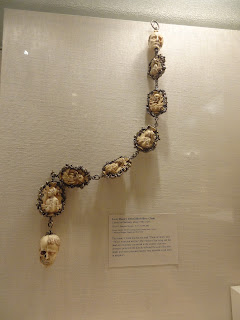 The armor section was interesting too but none of it looked very comfortable. 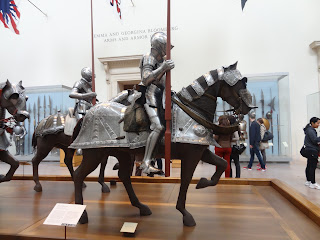 They even had a whole Egyptian temple right inside the museum. 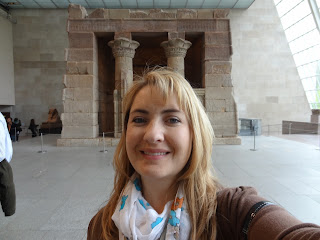 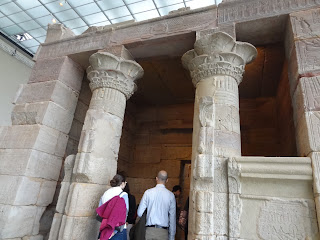 It even had it's own grafitti....we all now know Leonardo came and visited in 1826 and contributed to the grafitti... 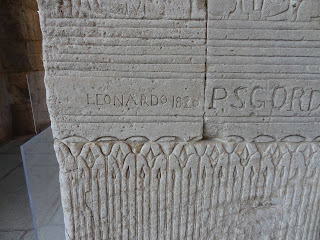 When I came out to head back to the hotel. I hit rush hour traffic. Try crossing the street without getting hit by one of these guys! I found out even if you have a light in your favor to walk across the street it's no guarantee that a car is not going to run right through your path. 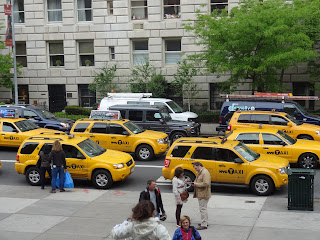 After a dinner of thank yous gifts and goodbyes and awards.... 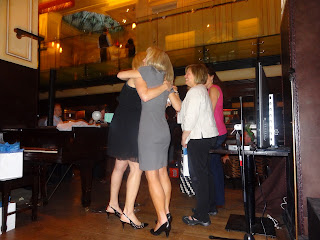 We headed to our show to see Spider-Man. 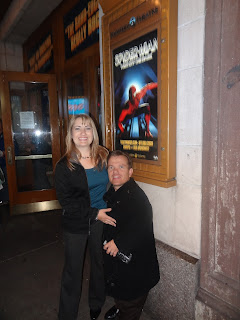 We picked Spider-Man since we figured they probably would never bring it to LA so if we wanted to see it we should do it there.

We had front row seats!!! Way to go New York Life for scoring us good seats.
We were so close we were getting spittle on us from the actors. 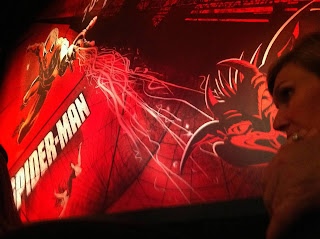 All in all it was a great trip and I was happy to be able to meet more good people from New York Life as well. 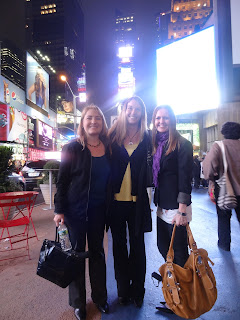 I laughed when I got home and wore my Canal street scarf for the first time to work. I wore it over a  white shirt and when I went to the bathroom 1/2 through the day I looked in the mirror and was shocked thinking "I didn't wear a blue bra" (It looked like I had a blue bra showing through my shirt)....I realized it was the dye from my scarf rubbing off...everything was blue by the end of the day...my clothes, my neck and my hands!

And then we bought this souvenir book when Jeff and I went to the 911 memorial. (Sorry again for the sideways pictures) We liked that it had a picture on the back of what all the towers were going to look like when they were completed. 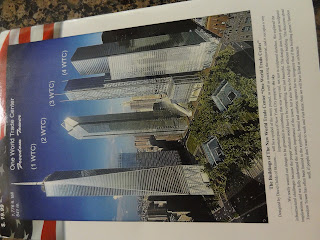 Then when I got home and started reading through it I was shocked. It's full of errors, words that I don't even know what they are supposed to be and grainy pictures. It was printed in China, obviously without a proofreader... 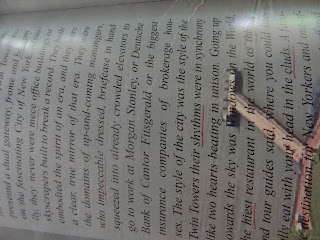 They even misspelled Pennsylvania! 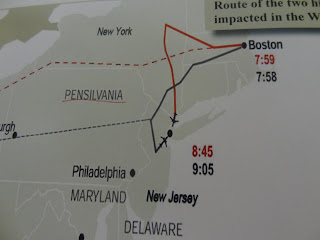 Towards the end they told the stories of a couple of guys and their account of what happened that day the towers went down...then they showed pictures of them selling this book on the street! So basically they made the book and were trying to sell them, then they thank all the news reporters at the end because they got most of the pictures from the TV! (no wonder they were so grainy!) 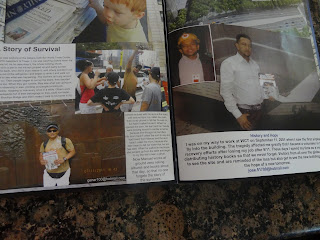 Reminded me of the time we bought a puzzle of the US states and capitals from a street vendor in Tijuana. We got home and looked at it and there was so many wrong spellings, wrong states listed and even wrong cities listed as the capitals all you could do was throw it away! Ha ha.

What an awesome vacation!! It's one of my dreams to go to New York one day and see a show. That really is shocking that the 911 memorial book was so full of errors!