This last week we had our ward Relief Society Birthday dinner. I signed up with a lot of other ladies to make and decorate 6 cupcakes for our own ward cupcake wars.

I thought it might be fun when I signed up...then as the day got closer I realized I was feeling pressure. I overheard somewhat asking "Are we being judged on decoration or taste?"  "Both" was the answer.

So the night before I looked through my cupboard and saw what I had... a pineapple cake. That sounded interesting. So I made it and put in some crushed pineapple and pineapple juice in place of the liquid. Well they tasted good but they all sunk down in the middle (you can see my cupcake in the middle was sunk down.

I ended out having to fill in the hole with buttercream later and pretend like the cupcakes were the right shape ;) 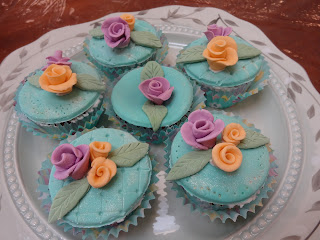 So getting my creative juices flowing I decided to work with fondant...marshmallow fondant to be exact. I have never worked with the stuff but I saw on TV that someone used it so I looked for a recipe on-line to make it. Not too hard, just messy and some work.

After I saw how much it was to buy pre-made fondant in the store...I didn't mind the work! 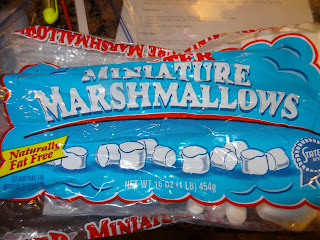 OK so here is the recipe (in case anyone is interested)

·         8 ounces miniature marshmallows (4 cups not packed, or half of a 16-ounce bag)
·         1 pound powdered sugar (4 cups), plus extra for dusting
·         2 tbsp water
·         Food coloring or flavored extracts, optional
Preparation:
1. Dust your counter or a large cutting board with powdered sugar. Place the marshmallows and the water in a large microwave-safe bowl. Microwave on high for 1 minute, until the marshmallows are puffy and expanded.

2. Stir the marshmallows with a rubber spatula until they are melted and smooth. If some unmelted marshmallow pieces remain, return to the microwave for 30-45 seconds, until the marshmallow mixture is entirely smooth and free of lumps. If you want colored or flavored fondant, you can add several drops of food coloring or extracts at this point and stir until incorporated. If you want to create multiple colors or flavors from one batch of fondant, do not add the colors or flavors now. Instead, refer to step 6 below for instructions.

3. Add the powdered sugar and begin to stir with the spatula. Stir until the sugar begins to incorporate and it becomes impossible to stir anymore.

4. Scrape the marshmallow-sugar mixture out onto the prepared work surface. It will be sticky and lumpy, with lots of sugar that has not been incorporated yet--this is normal. Dust your hands with powdered sugar, and begin to knead the fondant mixture like bread dough, working the sugar into the marshmallow with your hands.

5. Continue to knead the fondant until it smoothes out and loses its stickiness. Add more sugar if necessary, but stop adding sugar once it is smooth--too much sugar will make it stiff and difficult to work with. Once the fondant is a smooth ball, it is ready to be used. You can now roll it out, shape it, or wrap it in cling wrap to use later. Well-wrapped fondant can be stored in a cool room or in the refrigerator, and needs to be kneaded until supple before later use.

7. Begin to knead the ball of fondant just like you did before. As you work it, you will begin to see streaks of color coming through from the center. Continue to knead until the streaks are gone and the fondant is a uniform color. Your fondant is now ready to be used or stored as outlined above.

Ashley was my helper. The hard part was getting it colored. Lots of kneading and more mess. (My hands were covered in food coloring for a couple of days) 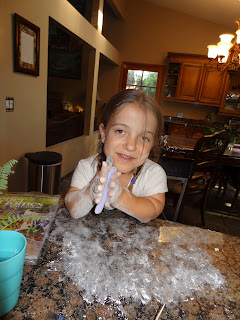 I watched a video on how to make fondant roses with each petal being squeezed individually between two pieces of plastic. They didn't come out too bad they just took a long time to get very many flowers and I had to keep the fondant soft so they didn't get cracks in them.

(I found out I could soften my ball of fondant for 5 seconds in the microwave and it was easier to knead. Put it in too long though and it was destroyed) 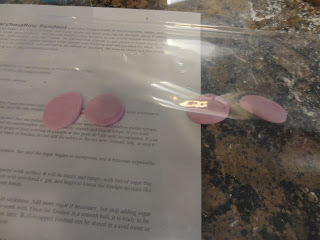 Here is one of the finished products up close. I actually found pedal dust at Fresh and Easy when I had to run over there for dinner supplies so I got some pedal dust on there as well.

I realized later that my fondant toppers were the same blue-green as my cupcake wrappers! 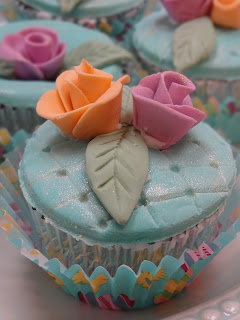 Meanwhile to get these beauties my counter looked like this after...not to mention the dirty dishes in the sink I didn't get to while I was playing...or the rest of the house ;) 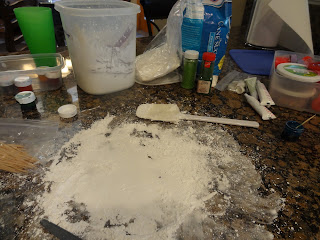 I found out when I got to the party that men were the judges. They came out at some point and asked me what my roses were make out of. I told them and then they asked me if I had really made them by myself. I laughed inside thinking they thought I just bought some candy roses to stick on top. 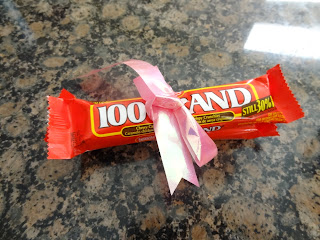 I have to say there was some amazing cupcakes there that night! Some could've won for taste alone. At our table we would put a cupcake on a plate pass them around so we could each take a bite. Yum! Lots of people did an awesome job! 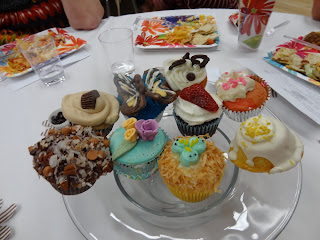 And in other news. I am now officially a substitute teacher. My name is in the system and I have my first job teaching a 5th grade class this Friday. (One of Jacob's old teachers)

To finish all my stuff I had to take a safety class including a section on Bloodborne Pathogens in Schools accompanied by the bloodiest video I've seen in a long time.

I had to try and stifle a giggle a few times. Sinister music and an announcer expounding on the dangers of catching dangerous diseases from children (as cute gradeschoolers played in the background). We saw blood on light switches, kids spreading blood all over in the bathroom and a janitor cleaning up a pool of blood on the floor. I'm wondering to myself where all the blood is coming from. The worst was the guy using the paper cutter and we watch him slice his hand....blood everywhere and all over the bathroom after he cleaned up (everyone gasped at that one)

The other extreme was a boy with a bit of a scratch being attended to by a school worker who had first put on industrial gloves and then gets a paper towel to put on his knee and then the paper towel is put in a special bio hazard bag in a special trash can. I'm thinking that might not be happening in real life ;)

Anyway I am now trained to keep myself safe from bloodborne diseases! 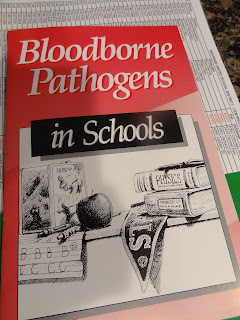 This weekend we broke down and bought the turtles a real aquarium with a filter. (I was tired of the stinky water I would change every couple of days)

After pricing the set up at about a couple hundred dollars at the pet store...we found the whole kit at Walmart for $50.  Gotta love Walmart for some things.

When we first put them in and got it all set up the baby turtles were having a hard time climbing up the basking rock. Jeff was so worried about them he came home after sacrament meeting to make sure they hadn't drowned...they hadn't they figured it out by then. 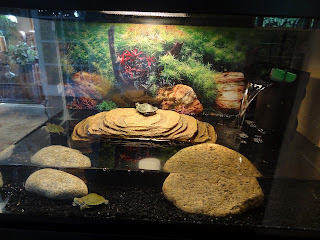 Maddie graduated from her last class at Petco and she is now a good citizen dog. The dog trainer there is much better at recruiting and upselling the next class rather than teaching the class we are in but we are now done! Or so I thought. I paid $75.00 for the vest to let her go in the stores and get her training hours and then come to find out he wants to charge us another $500 dollars to help her get her training hours to become a therapy dog. Hmmmmmm I'm looking at my options.

This weekend Ashley wanted to use the vest and bring Maddie to a store. Jeff didn't think she was ready so he only agreed to take her to Petco. (we didn't need the vest there)  Ashley was disappointed and didn't think it was fun at all because that's where we do all the training anyway. 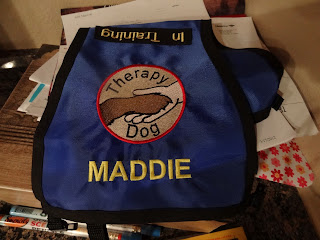 Friday was the Alice and Wonderland play at Jacob's school. He didn't want to try out for it this year but we was happy to go and support his friends by watching them in it.

We realized when we got the program it wasn't like the story that we thought it would be it was a Disney singing and dancing show about Alice and Wonderland. 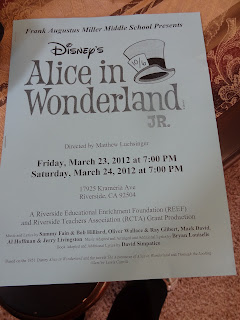 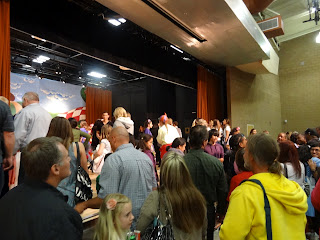 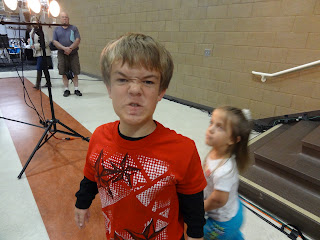 Ashley had Gold Rush days this week. Here is her get-up. I actually dressed up too but I didn't get a picture of myself. 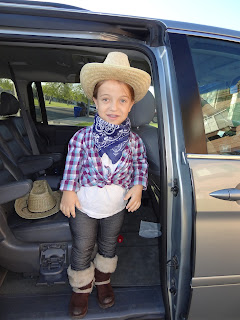 The 4th graders have been learning about early Californian history and they had their own mining operations going on. Their group had to stake their claim and pick up as much gold (feed corn) as they could and then stake another claim. If they picked up gold outside their claim they were considered Claim Jumpers and .... 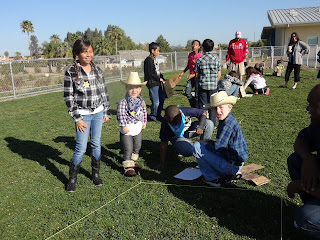 they had to go to Jail. I worked as a deputy in the field sending kids to jail and I worked in the General Store where the students were all given snacks, drinks and school supplies. What a fun day for them. 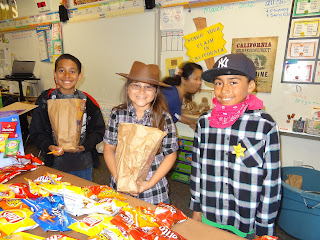 I got this Jehovah's Witness flyer on my doorstep...in French! They had our name on the top I couldn't read a word of it. Obviously because of our last name they just assumed we speak french.

I thought that was thoughtful...then I thought again. How did they get our name??!! 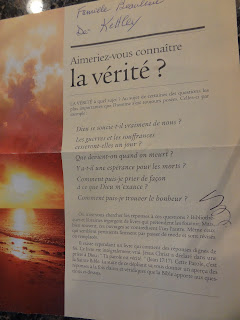 As soon as I saw what your cupcakes looked like, I knew you would be the winner. Very impressive! I'm not surprised that the men thought you bought the flowers to put on top ;)