My camera is still in the shop so this week my pictures are all from my phone...when I remembered to take them that is.

Well the last week or so the boys refuse to do much of anything other than play video games. I was met with resistance and refusal at attempts to get them out of the house and on to other things. I might as well name the loft “Howie’s Game Shack”. (A video game den of darkness at the mall)

So Ashley and I  did things together. We did pie tasting at Piper’s to help with a science project,  we went to the park day and hung out with the moms and Ashley invited Sole to the King play that night. Becca Nelson was playing the lead creature in it. She was dressed as a forest demon and did a great job hamming it up.  The boys again didn’t want to go so we treated the girls, they got front row seats, ate snacks and loved it. (Jeff and I sat a row over so they could sit all on their own :) 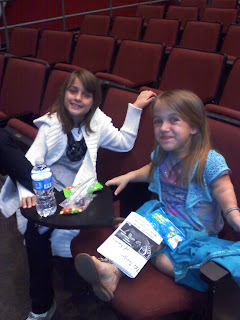 We bought a flower for Becca that the girls signed and was sent back to her, Becca was very happy! 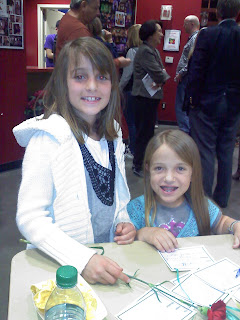 The next day was Saturday and being bored Ashley invited her school friend Daisy to the house and then to the chili cookoff that night.

The last couple of years I've won 2nd place in the corn bread competition. This year I bought special cupcake wrappers wondering if I would be lucky enough to temp fate and win 3 years in a row.  Mom's don't get awards for cooking every day you know...it's kinda fun to be handed some bamboo spoons for making yummy cornbread.

You know pride cometh before the fall and all that. I completely ruined my double batch of corn bread and all the special wrappers by forgetting to put in the baking powder :(
It was a hard heap of doughy mess.

Jeff asked me "don't you use a recipe for that?"  Ha ha Of course I have a recipe but if I'm not careful I'm likely to forget something, and I have to say this isn't the first time I've left something out of a recipe.

So I threw them all away and started over. The second batch was much better.

In the end none of the cornbread was judged anyway, the judges didn't get around to it I guess.

Well I was happy with the fact  that I didn't feed anyone a hunk of hard dough at least.

This week  this thing that parents everywhere dread came home...

Ashley came right from the rah rah assembly where they parade all the dollar store prizes they can win if they sell overpriced tidbits of stuff nobody needs.

Every time she comes home, it's always a declaration of how many items she is going to sell based on the prize she wants. She insisted that she HAS to sell 15 items to get the swirly pen she wants.

I told her I'll just buy you a swirly pen

Of course once all the other kids start selling the peer pressure is tremendous. 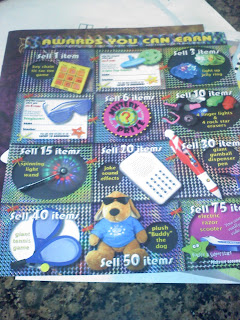 So I look through her brochure....

First off we have reusable shopping bags I can buy at the store for a dollar.....only $11.00 each.

6 ounces of froggie candies, funky monkeys or one chocolate coconut egg for only... $11.00 each

Mmmm at these prices they all seem pretty tempting....

Ashley drug me to the neighbors on both sides of us but I feel stupid subjecting anyone else to this highway robbery.  My plan is to hide this packet well, then make my customary 1 purchase on the last day so my daughter doesn't look like a total failure. 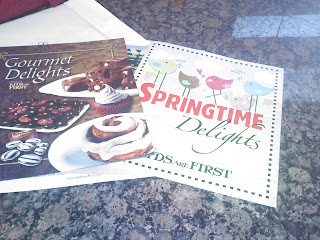 Love abounds at home...especially on Sundays.

I found this drawing from Ashley she made last Sunday that she wanted to mount on the door of her room.

No Taylor or Jacob!

then I love that she puts on the side...

I'm I the only one that sees contradiction here???? 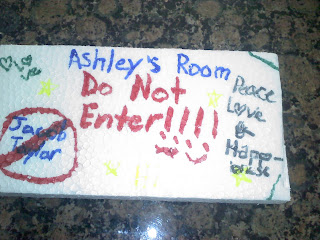 Jacob had a band concert this week. Of course we didn't know about it until the day before. I got all the kids to come with promises of pizza afterwards.

I have to say his band sounds much better than the band did last year :) 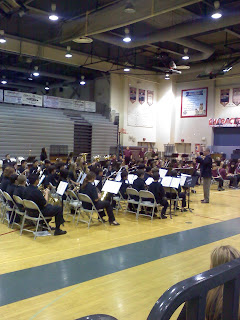 Funny story about Jacob these days....poor guy has been trouble with fluid in his ears again. He's had a cold that's drug on and on and I'm wondering if it's allergies and meanwhile his hearing has been horrible. He's failed 2 school hearing tests and if doesn't clear up he'll have to get tubes again. He doesn't really want them so we're waiting it out a bit to see if it clears up on it's own. Meanwhile I've learned to talk louder and realize that a lot of times Jacob can't hear very well.

A couple of weeks ago we had the elders over for dinner. They gave us a message and said a closing prayer. After the prayer we continued our conversation and then I look over and Jacob still has his head bowed and arms folded, he couldn't hear the elder say Amen. Sweet boy...he must have been thinking that was a long prayer.

So Taylor what funny story do we have about Taylor? ....well I gathered these out of all his thrown away lunch sacks lately.

I found out that he doesn't eat most of what I put in his lunch if he doesn't feel like it and so I have to rescue non-perishable things when I can before they all get thrown away.

I can never keep up with Taylor, something he might like one day he doesn't the next. 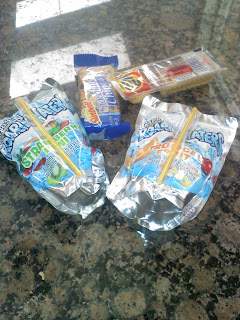 And to end the post I have pictures of Ashley participating in the Riverside Heroes Run.

She is part of 100 mile club at her school and she gets counted for miles at certain functions that add up over time. The goal is to get 100 miles in a year....at 25 miles you get a shirt...we might just be happy with getting a shirt.

Anyway it was a 1K run/walk but as soon as she realized it was also a RACE she got nervous.

Here is Ashley at the starting line...nervous that everyone would run her over.

I have to admit I felt a little nervous wondering what I had gotten her into. 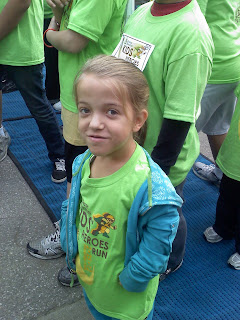 Here is Ashley at the finish line....nobody ran her over and I got to run the last 1/2 with her and revel in her triumph of crossing the finish line high-fiving all the people at the end.

I was happy that she was able to experience feeling the accomplishment of finishing the race and the fact that she wasn't last. 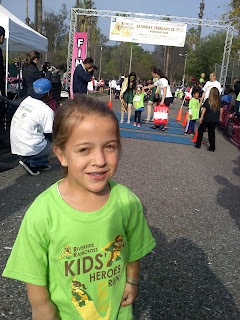 All the kids got t-shirts, medals and goodie bags. 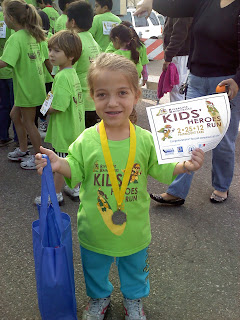 What was nice was the Riverside Police Department sponsored all the kids that signed up so instead of paying $10 a kid they all got to do it for free.

I was proud to live in Riverside that day!

Posted by Christine at 3:26 PM

I think the pictures of Ashley's bedroom are inspirational!!!

I have to comment on your corn muffin disaster. It doesn't matter how long I've been making cinnamon rolls--I have to have the recipe in front of me everytime so that I don't forget something. It's really hard to incorporate the salt into the already risen dough:)