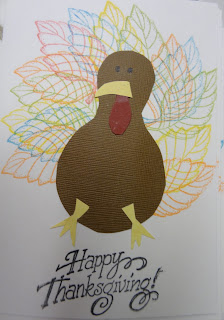 I did it as a game...and gave everyone 2 minutes to list as much as they could...

I told them about a quote I saw that said "What if you woke up in the morning and only had whatever you had thanked God for the night before..."

If that was the case I guess some of my children would be homeless and alone but they would have plenty to eat! 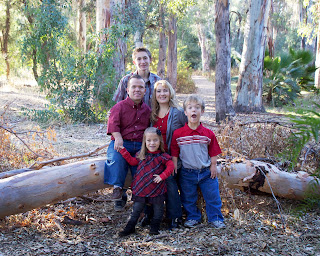 Sometimes I love to list everything I'm grateful for because it gets me in a good mood and makes it easier to see my blessings around me...even when life still brings challenges.

I love having a family! All the craziness, sacrifice, love, frustration and joy rolled up into one makes families wonderful!

It's pretty much a theme in our family that Jacob ruins family pictures....on purpose.

This is one that Shawna flew down from Colorado to take,
we had to get up at 6:00 on a Saturday to drive...
almost an hour to meet to get these pictures...
and this is what we got.

Luckily there are plenty more to choose from so a regular one will be on our Christmas card.

I'm grateful for our dog... 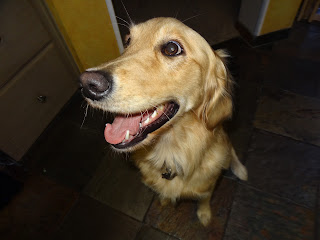 That got me to get the kids out of the house on Veteran's Day to to hike Sycamore Canyon.

I go all the time with the Elsworths but the kids never get to go...

There was a little grumbling getting out of the house but once we got there everyone loved climbing on the rocks and exploring. 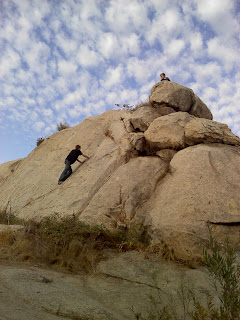 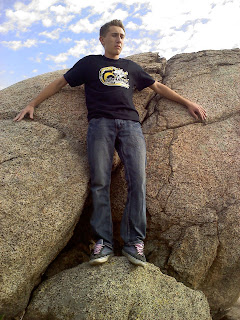 We were laughing later when bike riders rode down the same rocks that the boys were so impressed with themselves to have climbed up. 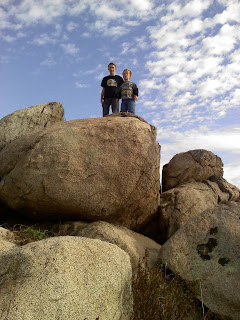 Ashley liked the stream at the end. 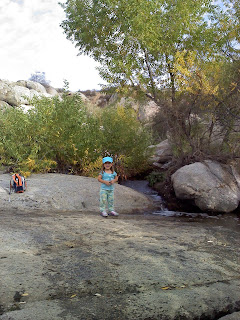 I am grateful for Doctor's and Dentists and Orthodontists...we've visited all 3 this week.

Unfortunately my combined dentist appointment for me and all the kids I scheduled 6 months ago has now turned into 4 separate appointments on 4 separate days....

My fault for part of it.

Its was Monday and I was doing my thing...and I get a call "This is Mickey from Dr. Mohn's office, Are you around the corner?"

OH NO!!! I totally forgot all the dentist appointments for the kids that day.

We live 20 minutes away and if you are 15 minutes late they'll cancel your appointment. Taylor wasn't even home either! She said they could keep 2 of the appointments...so I load Jacob and AShley up and we got there as quick as possible. First thing they asked "Did Jacob pre-medicate?" No...so he couldn't be seen. (Partly their fault because they hadn't gotten the prescription up-to-date so I hadn't even gotten it)  so they all got 3 separate appointments now :( 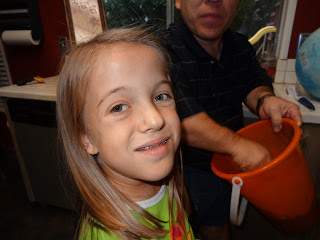 I am grateful for Primary Sacrament Programs.

We had ours a couple of weeks ago and they did fabulous! Our primary is big and the kids are cute and everyone did great on their parts. They had us in the audience write our feelings, notes and thoughts to the children as they were doing the Primary program to be read back to them in sharing time. What a great idea! I was able to express what I was feeling at the time ... I admired their excitement for the gospel, their pure testimonies and their sweet spirits. I also loved that they had small groups to sing some of the songs this year so each of the children stood out from the herd.

Ashley did her part great, she sang in a small group and did great and she played a piano solo and did great! We were so proud of her.

The only thing she struggled at was the final chord of her piano piece. She just quite couldn't get it. Afterward she told me why. "I need to see the dirty key to know where the chord was"
What????
I guess at home the piano key was dirty and she was using it as a reference!

I've been doing jewelry lately and selling it a bit...and buying more stuff after I sell it...it pretty much just supports it as a hobby :)

Anyways my new thing was to experiment with wire wrapping...I saw it on the cover of a book and saw a quick you-tube video and I've been playing around with it. 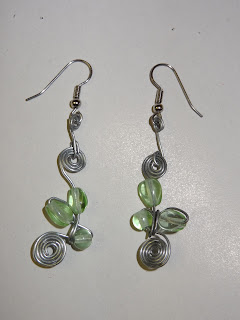 On Tuesday I was invited to go and help with my nieces mutual and make jewelry with the girls.  I was told to just come and they would have all the supplies....until the night before when the leaders called and said they wanted me to buy all of it...so back to the store I went (dangerous for me)

The night went good and the girls seemed to like it...even the tom boy girl who everyone was shocked made a bracelet. 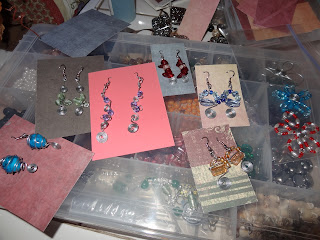 I am grateful for friends who inspire me, I have lots of them.

It was a friend who gave me the idea for this cute Thanksgiving craft. It's a gobbling turkey. There is a piece of sponge on the end of a string and you get it wet and slide it down the string and the cup amplifies it and it makes it sound like it's gobbling.

I went to Ashley's class and made them for art. Fun for even 4th graders...not as fun for the teachers that have to listen to the gobbling :)

I tried buying small cups but the sound wasn't right so I found I had to go with the big ones.

Right after I had my parent teacher conference with Ashley's teacher. She's doing great this year. 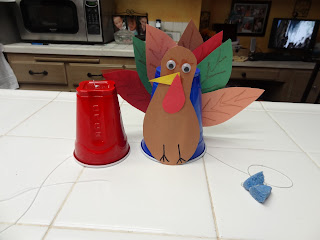 I'm grateful for the temple.

Wednesday Jacob got to go to the temple to do baptisms with the youth. His favorite part is the trip to In-N-Out afterwards.

He told me in his interview for his recommend he was asked at the end "Do you have any questions?"
"Yes, is there shakes with our burgers?" 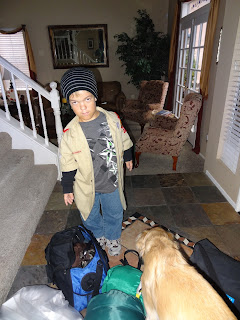 Jacob also got to go on a camp out to Joshua Tree on Friday with his scout troop.  I was grateful that he was warm enough, he didn't get lost, and he wasn't interested in the repelling part so I didn't have to worry about him ;)

On Wednesday I spent literally aaaallll day making this 15 bean ham soup for the first time.

It's been colder outside and I wanted to try something new so literally from 6:00 in the morning until 6:30 at night I boiled the ham bone, soaked beans, spent 3 hours simmering the soup, running back to the store again when I realized I didn't have an onion and getting special bread to eat with it.

Taylor dipped a corner of his bread in it and then looked at it in disdain for the rest of the meal without eating any. "Why do you have to make such weird dinners mom?"

Ashley ate like two bites and then filled up on bread.

Lots went down the disposal that night.

Jacob might have been a little more open to it but he was gone at the temple.

None of them will be eating leftovers.

I have a large amount of soup left..... for myself. 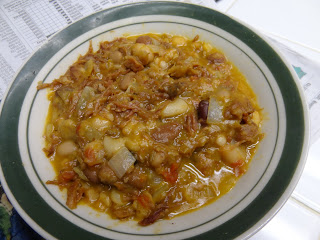 I am grateful for extended family.

Saturday we went to a farewell party for the Biggs (Jeff's aunt and uncle) who are moving away for a job change. We tried to entice the boys to go...there was an In-N-Out truck there but the catch was we had to go to a wedding reception an hour away first...then drive an hour back and then we got to be at the Bigg's party.

Taylor said In-N-Out wasn't worth it for an hour wedding reception, Jacob was just getting back from camping so we left them at home.

I am grateful for senty candles, plugs ins and other such things that are nice to have.

I got a new candle that smells like blueberry cheesecake.

The first time I put it out Taylor started smelling it

"Mom are you making waffles!?"

No, it's 9:30 and everyone has already eaten breakfast.

"Mom can you make waffles??" He kept asking me about waffles.

I agreed to make them the next day but the candle sent really made him want waffles I guess. 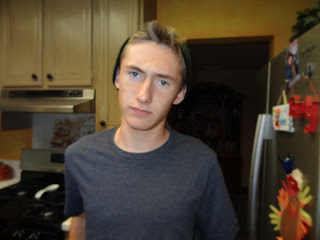 I am also grateful for our other pets that are frustrating at time but make us laugh at others.

They push open this top door and escape.

Once we realized this I told Taylor to put some twist ties on the door.

That worked for 10 minutes.

Then I put this carabeaner on it.

I woke up the next morning to mini-churro running around the house. This is how big the opening was and he could still squeeze out of it! 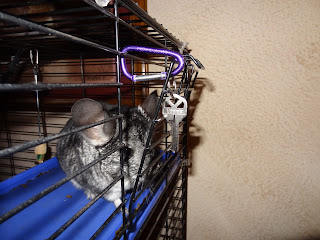 I'm off to clean the house for tomorrow!!

Christine, your posts always make me smile! I love the Thankful lists-Lol! I too am grateful for brownies and chocolate cake.

We've also been to the orthodontist and the dentist this week. And we're headed to the doctor this morning--thankfully, just for flu shots.

Enjoy the rest of your week!