This week has been interesting and a little like life in general...filled with good things but lots of worries and uncertainty too.
Monday started off as a day off for Taylor for parent/teacher conferences. He was worried that he wasn't doing as well as he wanted to in a couple of classes. Not to worry I picked up his report card and he had straight A's! As I met with each teacher they would say he was doing great. One teacher said if she could have a 100 Taylors she would teach for free! I was so proud.
On the downside Taylor has been having some weird dizzy spells and disturbing things going on with his eyes. So we've started the daunting task of trying to find out if we can figure out if anything is wrong. This week I brought him to a neurologist for a bunch of tests and then a couple of days later to a opthomologist since one pupil is larger than the other and his eyesight is horrible. They dialated his pupils and told him his eye is OK he just needs glasses really bad...but we're still waiting on the MRI (not til Dec 18), and blood test results to see if there is anything else wrong.
So we've spent the last little while worrying...his priesthood blessing helped if anything to calm us down. Taylor joked with the nurses when they were doing unfamiliar tests and has had a great sense of humor through it all. We're trying to just take one thing at a time and try not to worry. 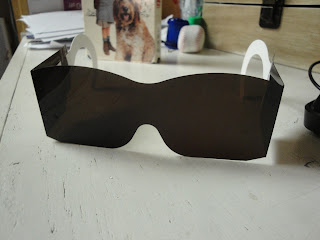 After a week of doctor's appointments, seperate hair appointments (couldn't get them in at the same time) and Road Show prep such as costume part buying, and making, and practicing I was ready for Friday and night out!
We did an overdo dinner date with the Stubbs to celebrate him making Council this year at New York Life. We celebrated at Ruth Chris steakhouse. 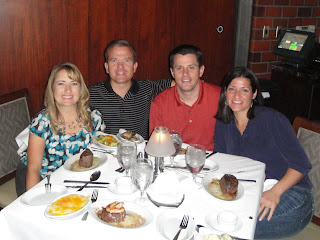 Good choice Ethan. They have the best food! 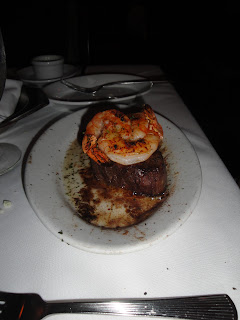 Of course Jeff had to let them know we were celebrating their 10th anniversary (that's why we couldn't go earlier). So two celebrations in one :) 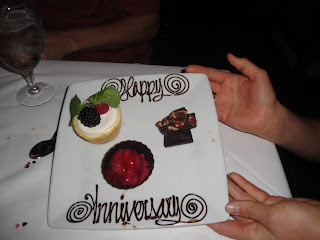 On Saturday we had a packed day. We started out with Road Show practice at the Stake Center for 2 hours.
It's coming along but it's hard to ever feel comfortable with it because every time we run through it, something changes! I'm always feeling unsure of myself! Oh Well tonight is dress rehearsal and Friday at 7:00 is the performance...at that point it is what it is and it will be done!
We raced from rehearsal to the soccer field for Jacob's game. We missed the 1st quarter but Jacob was able to play the rest of the game and Jeff was able to be the line judge for the rest of it too.
(He took the referee class this year and has been working on the sidelines during the game)
After the game we had about 1/2 hour before we were off to a baby shower for Jeff's niece. His half sister Lori's daughter was having a baby so we all went out to see them.
This part of the family is not someone we see often so the kids didn't remember anyone there (except Cheri who dropped in for a bit) but after awhile they warmed up and just enjoyed getting to know a little more family they didn't realize they had. (The cotton candy machine helped ;)
Behind me is Jeff's other 1/2 sister Michelle that I'd heard about but never had met. She was a sweetheart and was open to getting together again sometime. 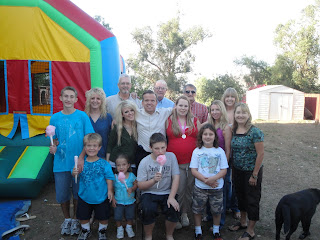 The kids liked the jumper too. 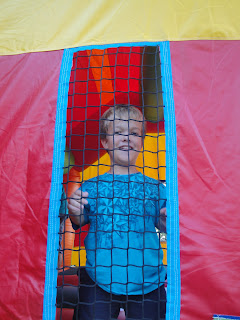 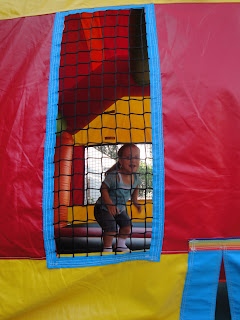 After awhile at the baby shower we were off to go see the final production of Annie at the High school. Trent Paige (a young man from the ward) was in the play so we were excited to see him too. We had something going on every night it was open so this was our last chance! 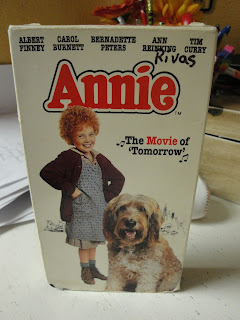 Jeff went right when the box office opened and got us front row seats. It was the best! The kids really enjoyed it. Ashley had watched part of the Movie of Annie and thought it was boring. I told her that the play would be more exciting, she agreed. It's always much better to see musicals live!
Now the boys are excited to try out for a play sometime for themselves. 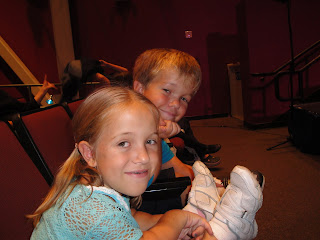 As an added bonus we actually won the raffle!!! With Jeff only buying one ticket!!! The kids were happy. 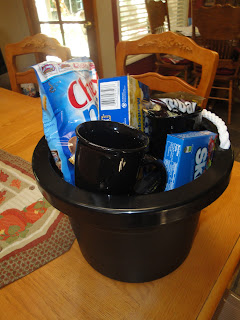 Well too much Saturday ended up resulting in a sicky family on Sunday. We all came to church but there was a lot of complaining about being achy, having headaches and a couple of sick stomachs.
Monday I was ready to start again...but today is Tuesday and I have Ashley home sick and when I went to investigate the "drips" in my cupboard I discovered something went wrong with my apple pie filling that I canned. All but 2 were fermenting and spilling out of the jars (I could've sworn they were sealed). I had to throw them all out because I didn't want to risk the 2 that seemed good and ended up killing my family!
:( all that work literally down the drain!  I guess a new week brings new worries. 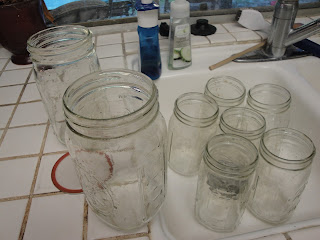 I called my canning friend (Piper) to ask her what she thinks might have gone wrong and she said if I bring her my jars so she can use them to can applesauce (she got more apples yesterday after canning a gazillion of them!) she would give me some apple pie filling.
I love friend like that!! :) :) Thanks Piper!
Posted by Christine at 10:52 AM

Glad I can help. :) I hesitate to say it, because I know you always hear it, but it really sounds like you guys NEVER get a rest!!

Christine, your poor little guy-I mean big because he IS 14! I hate dilating eyes. Only did it once but that was enough. Your doctor doesn't have the greatest bedside manner does he?!